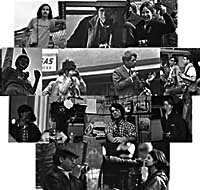 More than 100 students photographers have worked for The Michigan Daily since the first photographs were printed ca. 1900. The roster of Daily alumni photographers includes some who have gone on to notable careers as photojournalists--Pauline Lubens, Steve Kagan and Sara Krulwich to name just a few. Some have found success as commercial photographers, while for others photography became an avocation as they pursued other career paths.

To supplement the Bentley's Michigan Daily collection, the Bentley and the Board of Student Publications have reached out to former Daily photographers who may have personal collections of their work for the Daily, asking if they would consider contributing a selection of their best images for inclusion in the Michigan Daily Alumni Photographers Project. To date Jay Cassidy (1967-1969), Steve Kagan (1970-1973), and Sara Stillman (1995-1998) have contributed to the project. Cassidy has contributed his entire collection of 4882 images (original negatives and digitized surrogates). Kagan provided a selection of 91 digitized images and Stillman had earlier donated her collection of negatives to the archives, A selection of Stillman's negatives and approximately 200 images from the Bentley's Daily collection have been digitized in the initial phase of the project