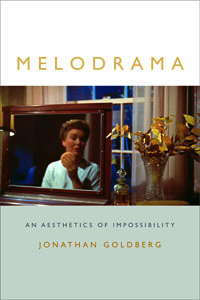 In Melodrama: An Aesthetics of Impossibility, Jonathan Goldberg outlines an ambitious project: to reinterpret and reinvent our understanding of melodrama as a genre/mode/form that thrives on and lives within the impossible, the contradictory, and the paradoxical. Where previous scholars have defined melodrama as the conflict between “exaggerated forms of good and evil in Manichean struggle,”[1] Goldberg wants us to remain aware of melodrama’s innate potential for “(im)possibility” and, through his argument, will attempt to “open queer contradictions”[2] that previous scholarship on the subject has largely ignored. He structures this argument through several media objects and across opera, film, and literature. The book itself is divided into two parts, each outlining one of the two central concepts that Goldberg utilizes: the impossible situation and melos + drama. These terms – representing paradoxical contradictions of character or situation and the skillful combination of music with dramatic action, respectively – motivate and frame Goldberg’s subsequent arguments. In his explanation of these two new reconstructive definitions of melodrama, Goldberg achieves a greater, more nuanced understanding of melodrama’s potential for artistic and philosophical expression, as well as its unique importance for the study of media, gender, race, and sexuality.

The first chapter begins with an examination of Beethoven’s Fidelio, specifically the portion entitled “Melodram,” which Goldberg believes perfectly encapsulates both elements of his argument. Goldberg’s careful analysis of the “Melodram” section of Beethoven’s work highlights both the musical movements and the actions of the various characters with elegance. He believes the titular Fidelio, a male disguise of the female character Leonore, is utilized by Beethoven to “sustain irresolution”[3] and play with inherent gender ambiguities. This ambiguity, Goldberg tells us, is central to the definition of melodrama and, moving to an interview with director Douglas Sirk, outlines in depth the impossible situation and melos + drama.[4] The following chapters will each attempt to examine works of melodrama through one of these two particular lenses.

Goldberg’s second chapter traces the encounters between cinema’s three most famous directors of melodrama (Sirk, Rainer Werner Fassbinder and Todd Haynes) and applies his framework to their most iconic films: All That Heaven Allows (1955), Ali: Fear Eats the Soul (1974), and Far From Heaven (2002). It also contains a plethora of interviews, biographies, production stories, and newspaper and scholarly articles, weaved together expertly in an effort to create a cohesive examination of cinematic melodrama. By examining each director’s definition of melodrama, their opinions of one another, the scholarship surrounding each director and, most importantly, their films, Goldberg uncovers commonalities in thought that provide ample and interesting material in his quest to filter melodrama through the lens of sexuality and queer theory. In his consideration of these films Goldberg discovers that melodrama, aside from its inherent ability to amplify and exaggerate, is “always also trying to find...a means to express something else, trying through [film] to draw us to some core experience of meaning difficult to come by otherwise.”[5] His work on these films perfectly encapsulates the impossible situation that melodrama strives for and dwells within by emphasizing their fluid, contradictory, or otherwise irreconcilable elements.

Goldberg’s argument begins to stumble in the third chapter, where he engages with his second theoretical definition of melodrama. His borrowed etymological understanding of melodrama as melos (music) + drama is simply less fruitful than his work with the impossible situation, in part because the mathematical, formulaic approach feels entirely at odds with the fluid, non-conforming definition of melodrama in earlier chapters. Regardless, Goldberg begins the chapter by examining the star persona of Farley Granger in two Alfred Hitchcock films, Rope (1948) and Strangers on a Train (1951), before transitioning to the musical and sexual elements in Patricia Highsmith’s Ripley novels. Though it is just as expansive and thorough as the previous chapter, Goldberg’s work here feels more general and less revealing about the construction of melodrama in literature and film. For example, the structure of the chapter becomes its own uninteresting formula akin to Goldberg’s melos + drama, with each text forming a math problem to be solved: introduction of object + relation to sexuality + relation to music = melodrama. Though the analysis of each individual text is excellent, the usefulness of that analysis to Goldberg’s overall project is minimal and does his argument a slight disservice.

The fourth chapter, focusing on Oscar Wilde and Willa Cather, is just as marginal as the previous chapter, though this perhaps says more about the strength of Chapter Two than either of the subsequent chapters. Following a thread laid by Haynes in the film Velvet Goldmine (1998), Goldberg examines the real-life letters of Wilde and the fictional work of Cather, particularly “Paul’s Case” (1905) and Lucy Gayheart (1935), in an illustration of their melodramatic potential. The degree to which this advances his argument is entirely debateable.

If, in this review, I have appeared to spend more time and energy on some chapters than others, this is because it mirrors Goldberg’s own work on Melodrama. A quick look at the table of contents will tell you that there is a great disparity in terms of chapter size that is, for the most part, reflected in their academic value. For example, the longest and arguably most useful chapter, at 57 pages, is Goldberg’s second, focusing on Sirk, Fassbinder and Haynes. This is in contrast to the first and fourth chapters, which hover around 20 pages each and differ markedly in their academic interest; Goldberg’s “Melodram” chapter, though short, does an excellent job introducing his two central concepts, while his Wilde/Cather chapter feels like an afterthought. Overall, Melodrama is useful for two groups of readers: those who are specifically investigating any of the objects Goldberg discusses, and those who might engage with its uniquely queer understanding of melodrama in conjunction with other texts. It is not and never pretends to be a complete study. And yet, for some, it may prove indispensable.

Matthew J.M. Grant is completing his M.A. in Cinema Studies at the University of Toronto. His previous publications include a review of All That Heaven Allows and “The Cabin on the Screen: Defining the ‘Cabin Horror’ Film,” both published in Film Matters. His academic interests include genre film, cult cinema, and digital or tabletop games.