Film Criticism
Odysseus loses himself in order to find himself; the estrangement from nature that he brings about is realized in the abandonment to nature he contends with in each adventure...ironically, when he, inexorable, returns home, the inexorable force he commands itself triumphs as the judge and avenger of the legacy of the powers from which he escaped.[1]
Max Horkheimer and Theodor W. Adorno

Over the years, Anthony Bourdain had rebranded himself from a globetrotting celebrity chef on the Cooking Channel (A Cook’s Tour, 2003-5) to globetrotting explorer on the Travel Channel (No Reservations, 2005-12; The Layover, 2011-13) to a globetrotting “journalist” with CNN (Parts Unknown, 2013- ). Despite the changes in network affiliation, the format is essentially the same: Bourdain is the embodiment of “gonzo tourism.” 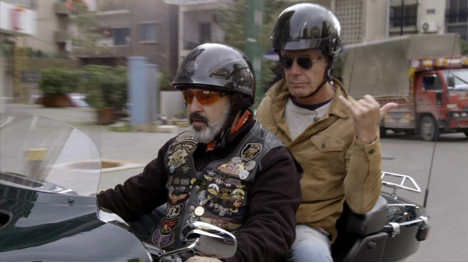 Figure 1.
The Wild Ones: Bourdain and a biker in Beirut

The Bourdain brand of “travel TV” is a juggling act of several contradictory components, all undergirded by the attitude and style of Bourdain’s admitted literary idol, Hunter S. Thompson. To this extent, Bourdain becomes an overdetermined representation of “adventure” built on a mélange of arrogance, bemusement, compassion, cosmopolitanism, earthiness, excess, exoticism, left-neoliberalism, machismo, New York-ness, pensiveness, and punk rock. He is equally at home with “the people” in the city and the country as he hobnobs with Barack Obama at a noodle shop in Hanoi, or Iggy Pop at an upscale Miami restaurant. The CNN promos for Parts Unknown use the famous “Hey Ho...Let’s Go!” chant from the Ramones’ “Blitzkrieg Bop” as Bourdain’s musical and pop-culture reference “signature.” In other words: veni, vidi, vici. 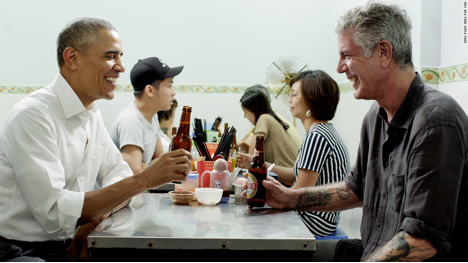 Figure 2.
Bourdain, and someone else of note, in Vietnam

In Trump’s America in 2017, Bourdain represents a masculine fantasy of progressive neoliberalism, or is it a progressive neoliberal fantasy of masculinity? One episode of Parts Unknown chronicles a Bourdain trek to the Bay Area. The connective segment consists of Bourdain undergoing sweaty Brazilian Ju-jitsu training in a local dojo. He bends but never breaks, testing his limits but never succumbing to them. Ancillary segments include a stop in Oakland to laud the militant history of the Black Panthers, a segment denouncing the internment of Japanese citizens during World War Two, and an indictment of Silicon Valley gentrification.

But as important is what Bourdain’s tour excludes. The history of San Francisco itself is represented as a rough-and-tumble port city founded by hard-drinking sailors and prostitutes. It avoids any mention of San Francisco as the epicenter of 1960s counterculture and Haight-Asbury hippies, San Francisco’s long history as a stronghold for LGBTQ rights, or addressing the San Francisco stereotype of smug liberal elitism.

In Bourdain’s journey through New Mexico, he is equally content cruising Route 66 in a 1950s convertible, a hold-over of the Beat Generation. He then enjoys the all-American pleasures of firing off an AR-15 and eating Frito Pie. In a post-2016 election interview, Bourdain emphatically blamed Donald Trump’s election victory on “the utter contempt with which privileged Eastern liberals such as myself discuss red state, gun country, working-class America as ridiculous and morons and rubes.” Bourdain continues, “I’ve spent a lot of time in gun-toting, God-fearing America...We should be breaking bread with each other, and finding common ground whenever possible.”[2]

The luxury Parts Unknown affords Bourdain is also his escape from a liberal bad conscience. On the one hand, he is self-aware enough to disparage his own status as the “privileged Eastern liberal.” At the same time, through said self-awareness, he can deny he is indeed a “privileged Eastern liberal.” Travel TV allows Bourdain to transcend, but not burst the bubble of, the bourgeois elite.

On Parts Unknown, Bourdain’s political awareness is rooted in the empirical more so than the empathic. More specifically, Bourdain’s worldview is not to be found in the superficial sympathetic odes and sanctimonious social commentary of his voice-over narration. It is instead located in the visual recounting of the experience in and of itself. When in Rome, Bourdain can wax about the cinematic genius of Pier Paolo Pasolini, the manly poetics of boxing, the monuments remaining from the Mussolini era, and cruise notoriously dangerous motorways in a sports car as seeming homage to the Futurists.

In Laos, Bourdain can walk among the villagers and temporarily experience the daily fear of a landscape littered with unexploded bombs. In Antarctica, Bourdain can brood about his existence amid the penguins and stand next to the Geographic South Pole marker in direct address to the camera with a pithy “bottom of the world, motherfuckers.” 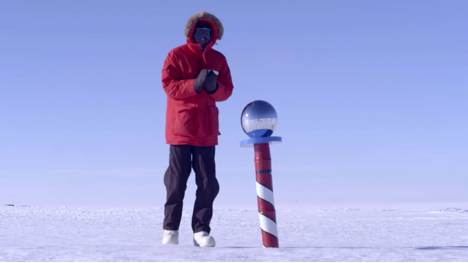 Figure 3.
Move over, Amundsen: Bourdain at the South Pole

Viewers are invited along only to vicariously bask in the enormity of Bourdain’s achievements. Parts Unknown chronicles the degree Bourdain’s global odyssey primarily exists within the extremes of global class society. Bourdain is equally at home slumming it in Third World poverty or carousing in posh destinations like San Sebastian. In the former areas, the poor cannot escape, but Bourdain can enter and leave at will due to his bourgeois privilege. He delivers a dejected sigh and a nod to his own compassion and courage. Conversely, in the latter areas, the rich can revel, only because of their bourgeois privilege. Here, Bourdain represents the oppositional outsider, which ostensibly absolves him of any real complicity in the perpetuation of class inequality. 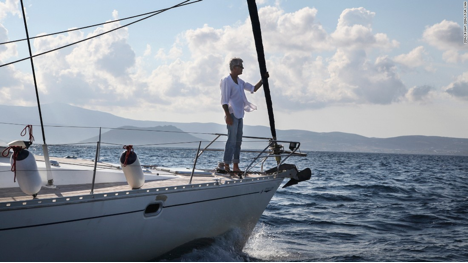 Figure 4.
Odysseus was here: Bourdain sailing off the Greek island of Naxos

In Dialectic of Enlightenment, Max Horkheimer and Theodor W. Adorno argue that the “role model” for bourgeois individualism can be traced to Homer and the saga of Odysseus in The Odyssey. In a world of globalization, mass media, and postindustrial capitalism, Anthony Bourdain becomes postmodernity’s Odysseus. As Horkheimer and Adorno write,

The adventures of Odysseus are all dangerous temptations removing the self from its logical course. He gives way to each allurement as a new experience. “But where there is danger, there is salvation too” [Hölderlin]: the knowledge which comprises his identity and which enables him to survive, draws its content from experience of the multitudinous, from digression to salvation; and the knowing survivor is also the man who takes the greatest risks when death threatens, thus becoming strong and unyielding when life continues.[3]

On Parts Unknown, the overt message is Bourdain’s journey “from digression to salvation,” as his singular experiences around the world make him a “better person” in the true spirit of liberal humanism. The hidden message suggests something far different. What’s important is not that Anthony Bourdain becomes part of the world as he explores “parts unknown;” what we are left with instead is the extent to which the world’s “parts unknown” become mere parts of Anthony Bourdain.

Doyle Greene is an independent scholar who has written several articles and books on film, TV, and popular music with an emphasis on ideology critique of American popular culture. He also serves on the editorial board of Film Criticism.