Bob Hebert outlines the long process involved in the development and eventual launch of the new Business Information Commons in the new business college building, Farrell Hall, at Wake Forest University. Bob displayed tenacity and grit in never giving up on the idea and in steadfastly advocating for an information commons over the years. His patience, perseverance and political savvy paid off in the end as the new Business Information Commons opened in 2013 in the heart of Farrell Hall to rave reviews from faculty, administrators and students alike. Laura Walesby, Column Editor

In August 2013, Wake Forest University (WFU), located in Winston-Salem, NC, opened Farrell Hall, the new $54 million home of the Wake Forest University School of Business. Farrell Hall houses all the undergraduate and graduate degree programs in the WFU business school, except for the two MBA programs housed in Wake Forest’s downtown Charlotte, NC campus. There are approximately 1,100 students enrolled in business degree programs located on the Winston-Salem campus of WFU and about 175 enrolled in programs in Charlotte.

Two business librarians are located in Farrell Hall in the "Business Information Commons" (BIC). The BIC is a 3,500 square-foot study space, divided between a glass-wall-enclosed 2,300 square-foot quiet study area and a 1,200 square-foot casual study area located outside the glass wall.

The enclosed area of the BIC includes private offices for two librarians, a small conference room, two student study rooms, a room with four Bloomberg terminals, and tables for 54 students. The casual study area includes tables accommodating 18 students and casual seating that can accommodate an additional 20 students. There are no print resources housed in the Business Information Commons.

Organizationally, the BIC is part of Wake Forest’s Z. Smith Reynolds (ZSR) Library (the main library at WFU). The two business librarians (currently myself and my colleague Summer Krstevska) are part of the Research & Instruction Team of ZSR and report to the Director of Research & Instruction. The budget for business information resources is part of the ZSR Library budget, and it includes some annual contributions from the School of Business that are dedicated to supporting certain resources.

Business books and the few remaining print business journals are housed in ZSR. Faculty and staff may have books delivered and picked up from Farrell Hall, while students must walk the short distance to the library to access print books. 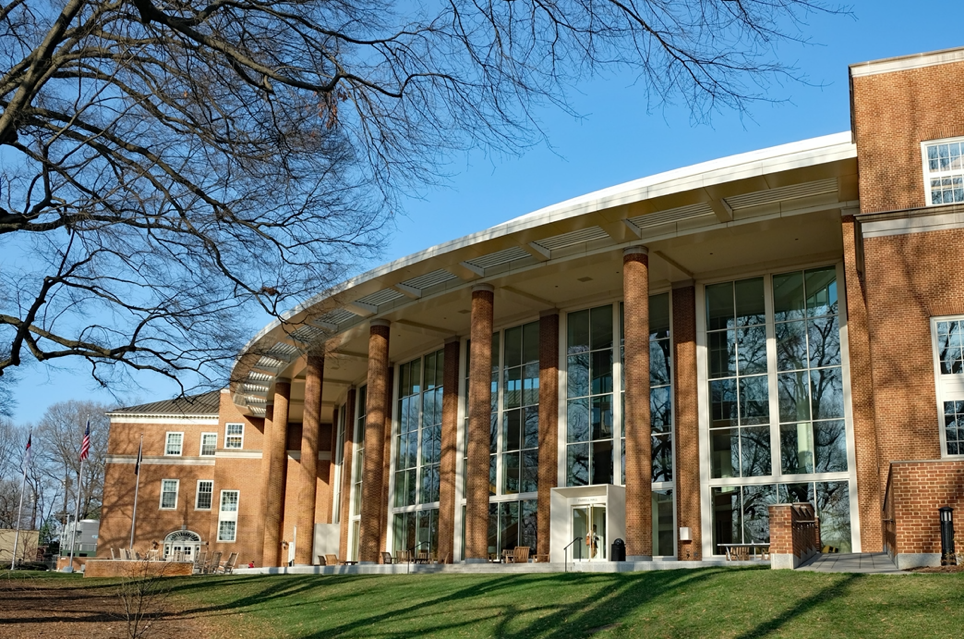 Located in the center of the second floor and overlooking the atrium, the Business Information Commons occupies prime real estate in Farrell Hall. It is an attractive study space and gathering spot for students. It is hard to imagine the business school building not containing this popular space.

Nevertheless, during the planning stages of Farrell Hall, it was not certain that the new business school would contain such a facility. When planning a new building, decision makers must consider many conflicting needs and wants, and "a new library" is not usually at the top of the list of must-have features. When I look back at the story of how the BIC came into existence, I feel surprised that it was included at all in the final plans.

The idea for the BIC precedes the opening of its doors by almost a decade. I first proposed the idea of a "business information center" during a 2004 meeting of the senior staff of the Graduate School of Management. At the time the graduate and undergraduate business schools at Wake Forest had separate administrations, buildings and faculty.

I was part of the graduate management (MBA) school staff, and I worked in the Worrell Professional Center, which housed both the law school and the MBA school. A librarian in the ZSR Library served the students and faculty of the undergraduate business school.

In a 1995 Wall Street Journal article about the Professional Center, reporter Ken Gepfert perceptively described the union of the graduate business and law schools as "...a way to combine the two schools in one building because the university didn’t want to pay for two new structures..." and a marriage "...that isn’t working out exactly as planned" (Gepfert, 1995, p. S1). 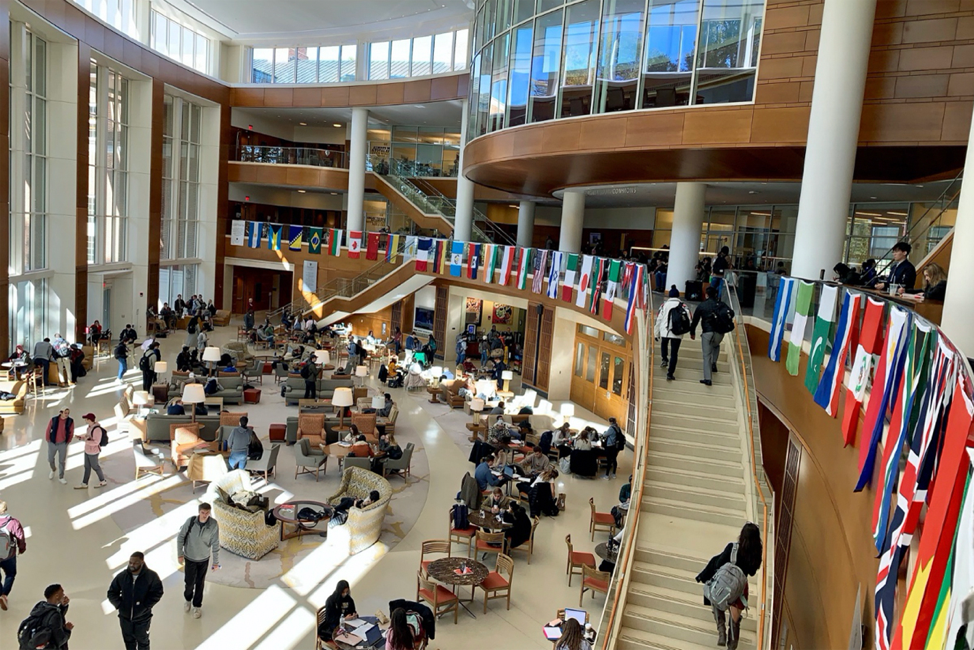 Though I made the best of this "bad marriage," I always wondered how I might escape it by establishing a separate library serving just the needs of the MBA faculty and students. During the early 2000s, as most of our key business information sources moved online and we became much less dependent on print resources, I realized that we did not need a large space for our own library. I also realized that the school no longer needed its own computer lab, since all of our students were required to own laptops.

When the management school dean invited senior staff to come up with an innovative idea and present it at the next meeting, I figured that this was my chance to make a pitch for a "business information center" to be located in the space then occupied by the computer center. After verifying that the school’s IT director would be on board with the idea, I presented it to the dean and his staff at an October 2004 meeting.

My proposal met with universal and enthusiastic approval from the other staff members. The dean seemed to like it, too, but he informed me that he needed time to think it over. He thought it over and he decided that he liked the idea of repurposing the computer center so much that he wanted to convert it, not into an information center, but rather into an "innovation center." That’s what happened, and so my proposal died. 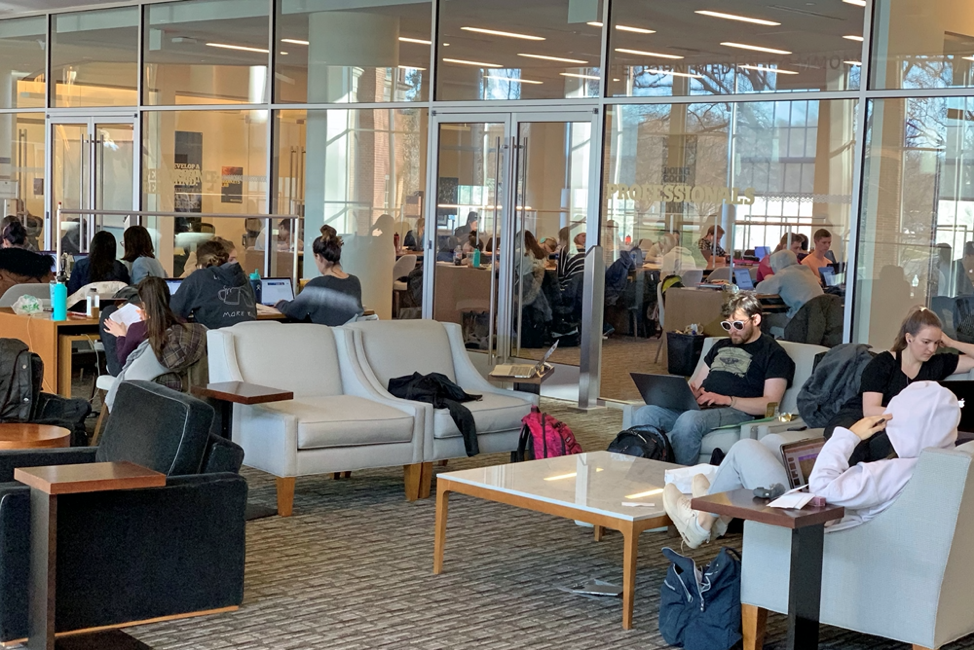 However, one should never give up on a good idea, so I kept my proposal in the back of my mind while waiting for the next opportunity to try to implement it. In 2006, I drew further inspiration for my idea by reading an article in the September 2006 issue of American Libraries. Librarian Drew Racine (who at the time was head of facilities planning and operations at the University of Texas at Austin) argued that academic library systems should:

Centralize books and spaces for users in one or two large, formidable-looking buildings, one of which is the current main library building.... Trade in other library space for small areas in other academic buildings.... Deploy [librarians] to staff these pods.... Call them Campus Research Centers or something.... (Racine, 2006, pp. 34-35)

It was a perfect description of what I wanted to do. I just needed a new business school building in which I could implement the idea. Though a new building seemed seemed like a fantasy at the time, it eventually came true.

During the financial crisis of 2007-2009, the administration of Wake Forest finally decided to do something that it probably should have done decades earlier, i.e., merge the undergraduate and graduate schools of business. At the same time, a new dean, Steve Reinemund, took over as head of the merged schools. Reinemund was the retired CEO of PepsiCo. 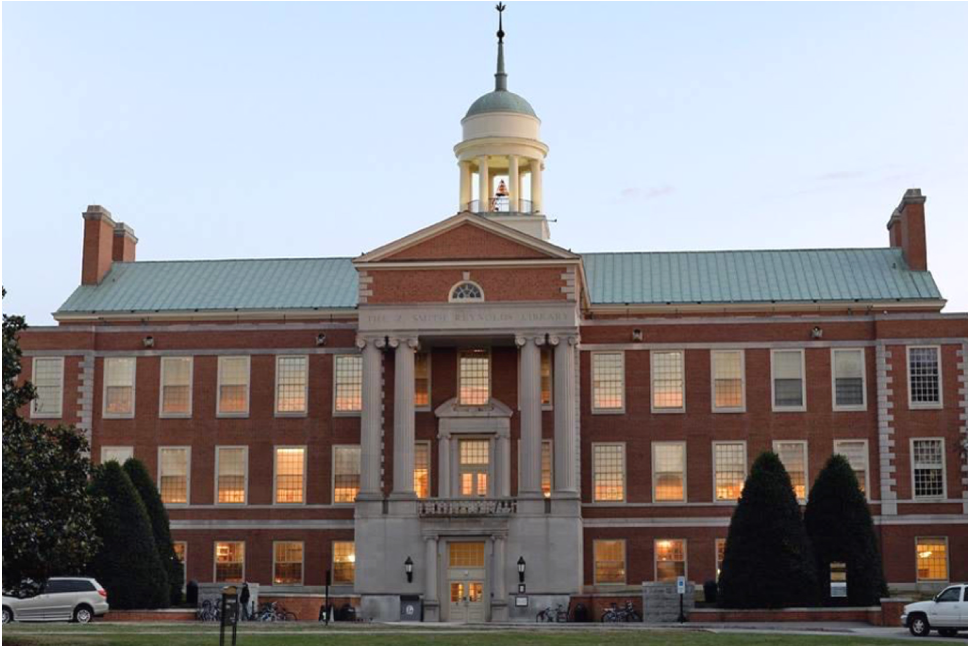 While it was easy to merge the two schools on paper, it was more important to bring the two schools together in one location, because a real merger would require both administrative and physical union. The dean and the university explored a few options for bringing the schools together in one place, and Reinemund finally decided that the answer lay in a new building.

I was skeptical that the dean could raise the necessary funds in a timely fashion, but calling on his skills as a sales professional and his contacts from decades as a top executive, Reinemund raised most of the money necessary ($54M) for a new building in a relatively short time. Mike Farrell, an investment professional and father of a business school undergraduate student, made a key donation of $10M towards the new building.

The proposed new business school building was an opportunity to revive the idea of a business information center. Based on the earlier failure of my proposal, I realized that I would need to enlist allies to support the idea.

At the start of the planning process for the new building, I sought allies in my colleagues Mary Scanlon (business librarian for the undergraduate school) and Lynn Sutton (director of the main library). I outlined my idea in memos and emails, supported with references such as the American Libraries article. My colleagues liked the idea and indicated their support.

The planning process for a new building can be contentious and challenging. There are many competing interests and financial constraints involved in planning, designing and constructing a $54M academic building. We could not assume that key decision makers would agree that a business information center should be part of the design.

The planning and design process took about a year. My colleagues Mary, Lynn, and I attended numerous planning and design meetings and lobbied for the proposed business information center. Library director Lynn Sutton’s support for idea proved to be key. As library dean, she had the rank of dean and so she could lobby Dean Reinemund as an equal. In the end, she convinced the dean to include the information center in the design of the new building. 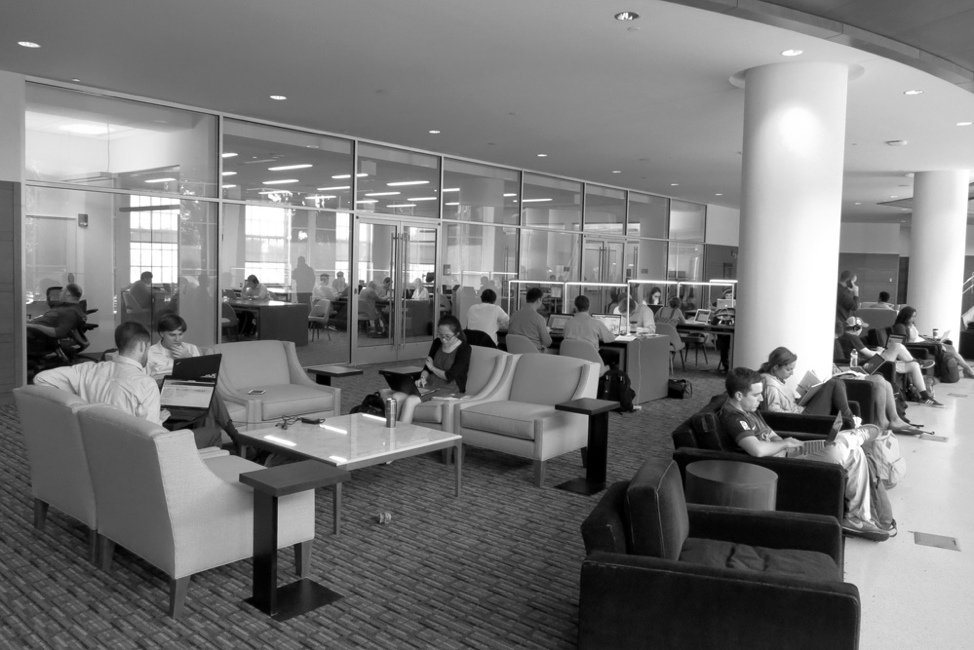 When the Business Information Commons opened in 2013 along with Farrell Hall, it won over previous skeptics. It proved to be a space approved and admired by administrators, students, faculty and visitors. In fact, Dean Reinemund liked the space so much that he thought that it was his idea in the first place. I was more than happy to share the credit.

The moral of the story of the Business Information Commons is to never give up on a good idea; enlist the help of allies to support it; and focus on how to implement the idea and not who gets credit for making it happen.

To view photos of the construction of Farrell Hall and the Business Information Commons see: https://www.bobhebertphoto.com/ABLD-Meetings/Farrell-Hall-Construction/