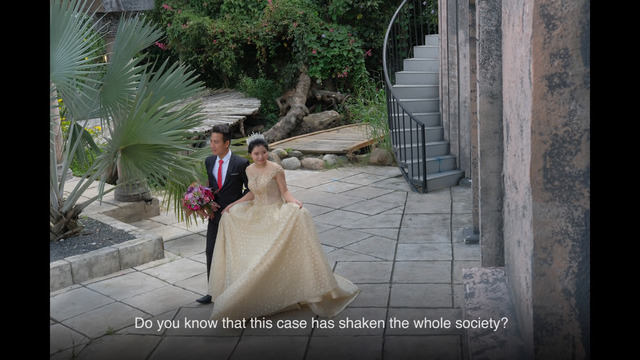 Prior to moving to Hanoi where I have lived since 2007, I regularly spent extended periods of time in Vietnam making images, both moving and still, beginning in 1990. I have been quite privileged over these decades to learn something firsthand — through encounter, acquaintance, and friendship — about the development of contemporary art in both the country and the region, and, in particular, of photography.

I want to share here the photographic work of four young women whom I have come to know since 2015, two from an intensive photography workshop I have sporadically organized here in Hanoi and two whose work I was introduced to by others. In presenting this small selection of photographs, I do not mean to define or suggest anything: There is no organizational framework. Rather, I am interested in showing the works of four individuals whose thinking I respect and whose commitment to the process I admire. They have all contributed their thoughts to this presentation about their influences and methodologies.

The photography community in Vietnam is not a large one and the number of women making distinctly personal work within that loosely defined group of both professionals and amateurs is minute. In 2013, Nguyễn Thanh Hải, professionally known as Maika Elan, notably won a World Press Photo Award for her beautiful series The Pink Choice. This could have been seen as a moment when something shifted in the local community, especially in the direction of women. But it is not clear yet that this has been the case. Today there remain few frameworks for sustained support or nurturing developing creative voices within Vietnam and only slightly more outside the borders in neighboring countries. In discussing each person’s work, some of these places will be touched on. 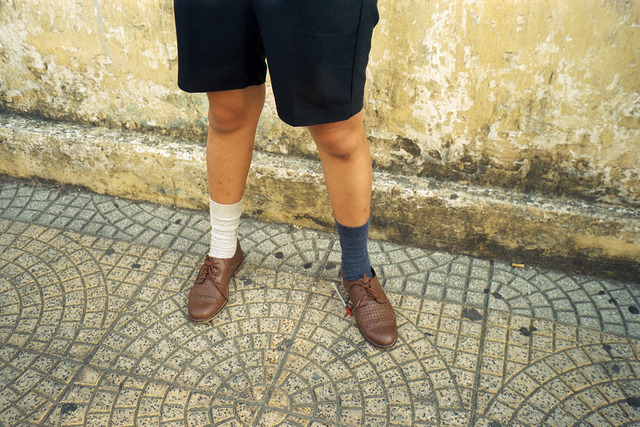 In 2009, the filmmaker Nguyễn Trinh Thi started a small documentary- and experimental-film and moving-image center called Hanoi DocLab. The space held regular weekly screenings, hosted visiting artists and academics, and ran film workshops. In 2013, I organized the first of three long-term photography workshops at DocLab, the only ones of their kind that I am aware of in the country. There are a number of short-term workshops, lasting roughly a week or ten days, both within Vietnam and in nearby countries and some are well known, professionally mentored, and attended by select applicants. But at the time, I saw an opportunity for something more sustained and intensive that was partly theoretical, partly historical, and partly practical with a touch of research thrown in — closer to the idea of a college course.

It was through these four-month-long workshops that I met two of the women whose work follows, Ha Dao (in 2016) and in 2018 Hoang Phuong-Thao (Lac Hoang). Both women are from Hanoi. Earlier, in 2015, I had been introduced to the work of Ao Kim Ngân (Yatender) and at about the same time found Thy Tran’s photography. These women are based in Ho Chi Minh City. I have followed the works of all four during these subsequent years. 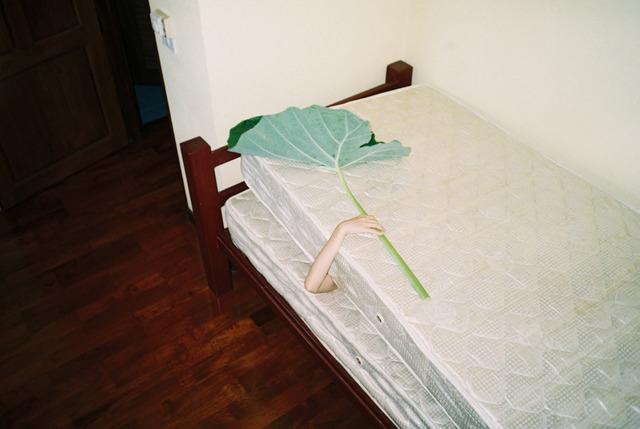 Here are four early-career artists working out their own territory — already producing, exhibiting, and publishing meaningful work. Some have begun working professionally, others are looking toward an advanced degree, but each is developing her own path. Although it might be tempting to look for parallels or influences in their work from the perspective of Western photographic history or practice, I think this is a limiting response. Certainly the Internet has opened up the possibilities for research and investigation and, unlike during earlier decades, the opportunity to travel or study abroad is in reach for a growing number of Vietnamese; in fact, all four women have international experience. So there is the increased potential for photographers and artists in Vietnam to experience outside developments in contemporary art practice either electronically or through direct experience.

What I think is present in these artists’ work is that they have given themselves permission to be in the world, each in her distinct way. The social and the political are articulated through the personal. The camera is both a means of being present and an extension, even projection, of the self, activating the documented moment and putting the artist into the world — a kind of cause and effect.

Born in 1995, Ha Dao is a 2017 graduate of Royal Melbourne Institute of Technology (RMIT), in Hanoi, and was on track for a career in advertising before joining the DocLab photography workshop in the fall of 2016. Her portfolio The Mirror was produced out of that, a “slightly truthful, slightly fantastical diary that is open to the public” in which she turned the camera on herself and her partner — a view of love’s details with bruises and fish scales. In 2016, Ha Dao became managing editor of Matca, a newly formed online journal for photography, which now also has a physical space in Hanoi and has become a leading center for photography in Vietnam. (Matca is profiled in the “Platforms” section of this issue of the TAP Review.) The following year she went on to study at the Angkor Photo Workshop, in Siem Reap, Cambodia, and in 2018 at Kolkata’s Foundry Workshop, producing additional series out of both of those experiences. She remains very active writing, curating, and photographing, primarily around issues of gender, identity, and cultural changes.

The work shown here, All Things Considered,is her most current and was produced during a residency at Heritage Space, in Hanoi, in 2019. Ha Dao spent time in a town in southern Vietnam where she explored the disturbing murder and dismemberment of a serially unfaithful man by his wife two years earlier. With the neutrality of crime-scene images, combining both staged and naturally occurring situations, the work questions “the capacity and authority of photography to provide information.” The finished work is in slideshow form with audio from the trial of a male judge’s questions and commentary and the female defendant’s responses. The sequence of images and sound is arranged in a timeline — the audio from the actual trial accompanying the photos’ deadpan view. We are offered a small, clinical postmortem on a system that chastises in a male voice, is disbelieving when confronted by a wife’s mortal rage, then hurries to put things quickly back exactly as they were. The shadowless front flash of Ha Dao’s camera leaves nowhere to go. 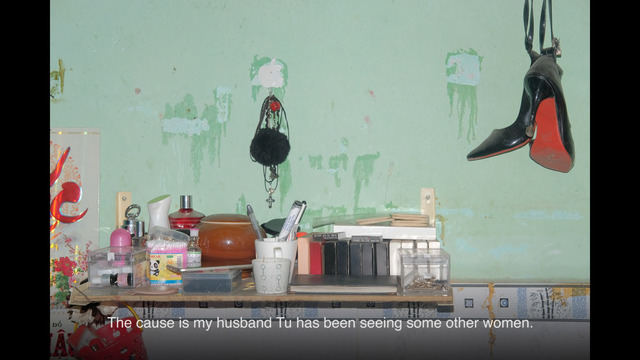 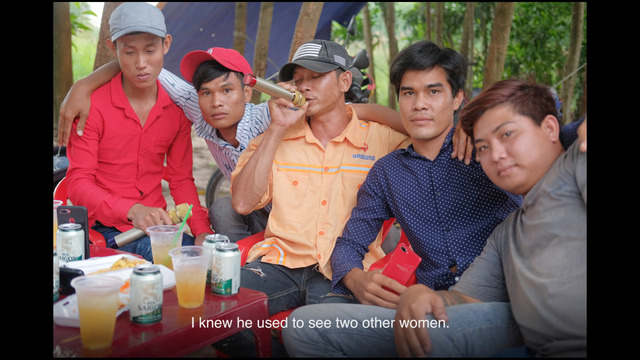 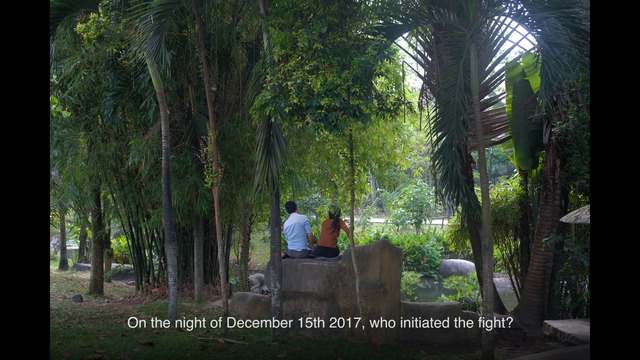 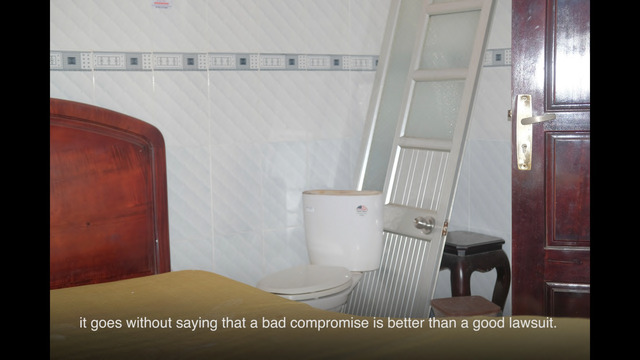 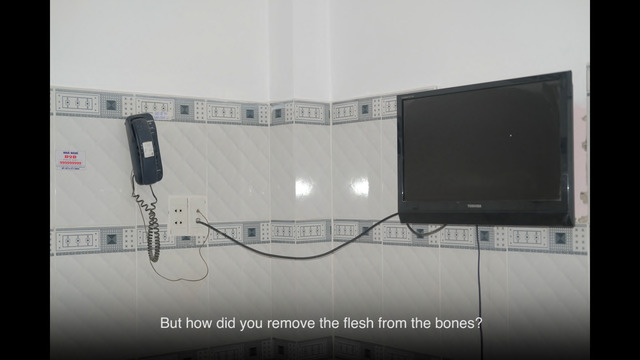 Ngân assumed for herself the name Yatender even as she created her own path in photography. Born in 1988, Yatender, who is self-taught with a camera, began by documenting herself in small experimenting and performative moments in both public and private (interior and exterior) spaces — an “intimate method of recognizing the ever-changing self.” Since 2015, she has produced several ongoing portfolios in which she takes on the roles of photographer and subject, composing and posing, in a continuing experiment to “let another me emerge.” She has exhibited her work often in the region and been published and interviewed regularly online. In the work produced for the series Persona, shown here, Yatender cites influences by John Cassavetes, Takeshi Kitano, and Maya Deren, three filmmakers who have also appeared in their own work. Her images hint at the cinematic, an articulate mise-en-scène as she witnesses her body through time against a social backdrop. For Yatender, photography represents a “visual vestige of human communication in its greatest simplicity” as she chronicles her interest in the fragility of life and herself within it. The different roles she takes on in her work suggest the complex landscape she sees women living in while navigating between expectations and personal desire. 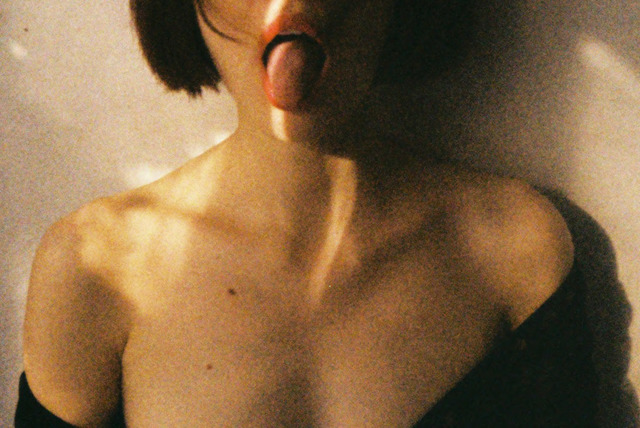 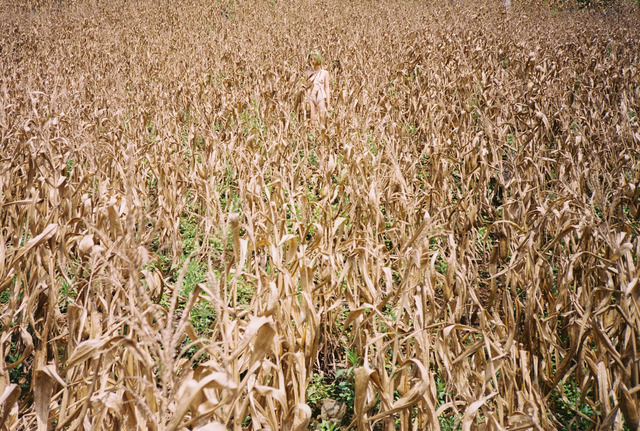 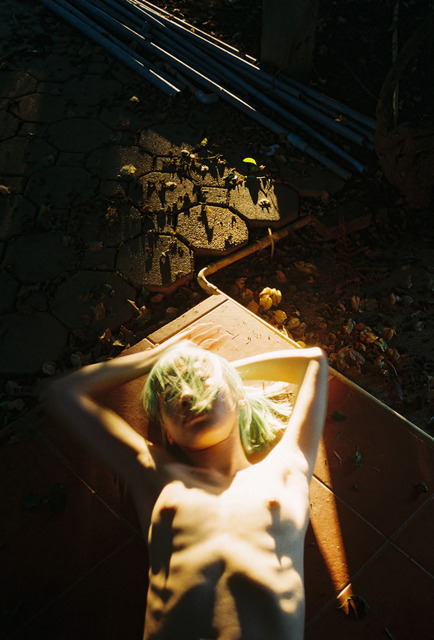 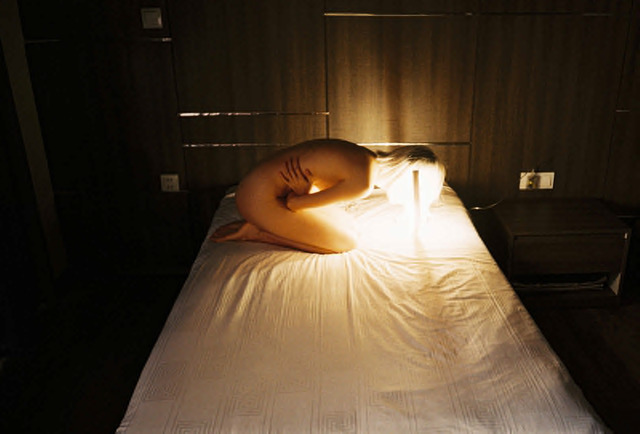 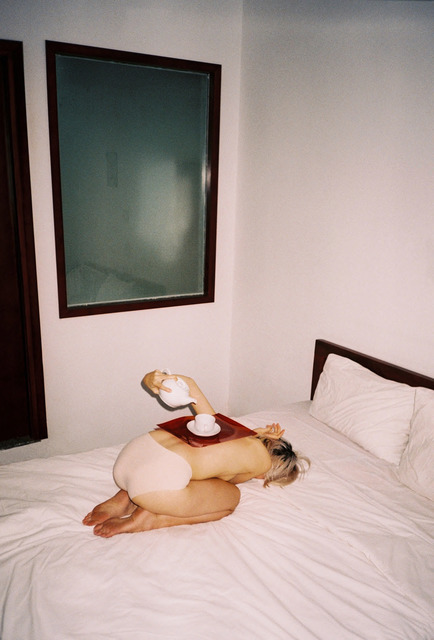 Hoang Phuong Thao — who often works commercially using the name Lac Hoang — was, like Ha Dao, born in 1995 and is from Hanoi. In 2018–19, while on a gap year from Columbus College of Art and Design, in the United States, she found her way to the photography workshop at Hanoi DocLab, where she developed her portfolio Mirror Therapy. Thao arrived in the workshop with a well-developed visual vocabulary, having spent some years in school already as well as working commercially as a photographer and art director. Her interest in what she calls “the language of intimate storytelling” and in “reconstructing memory from images” was put to precise use in creating what is perhaps her most personal work. Following that, through a program at Matca a few months later, Thao was in residency producing more new work in Singapore at Objectifs for a month, before returning to her studies in the United States.

For Mirror Therapy, Thao appropriated small generic photographs of family members, friends, or a former lover and paired these with common household or kitchen objects, such as uncooked meat, arranged into sculptural combinations that she then photographed. These “combines” were designed to reflect some sense of the people portrayed or the lasting impression of a memory — they are open-ended and provocative. The resulting diptychs are then captioned with Thao’s own written texts that might contain a story, a recollection, or a feeling that she touchingly connects to each assemblage and creates a perpetually shifting triangulation of meaning and interpretation. 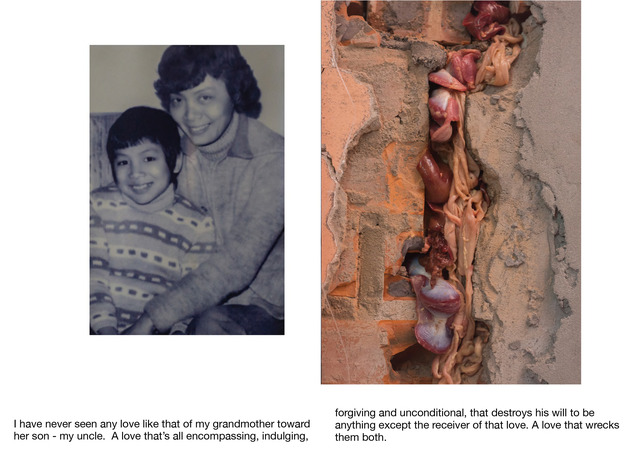 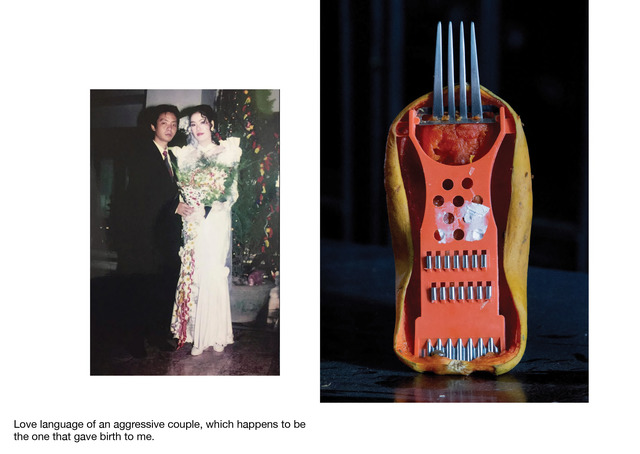 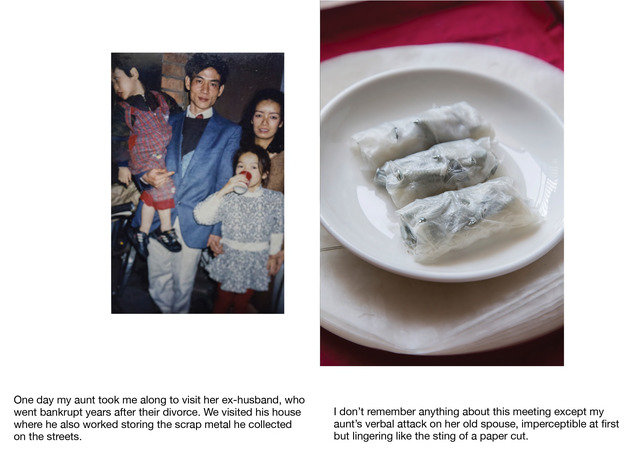 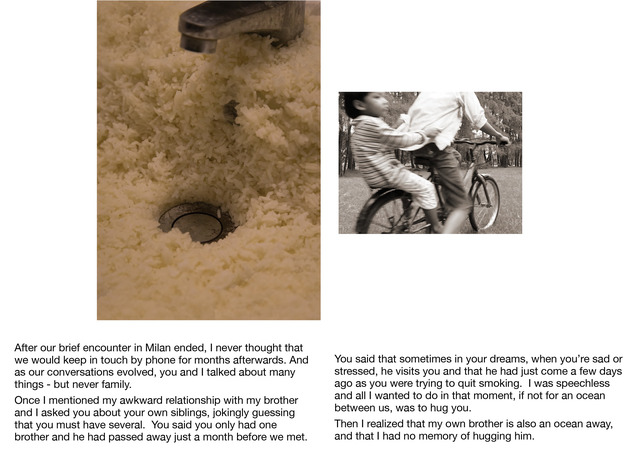 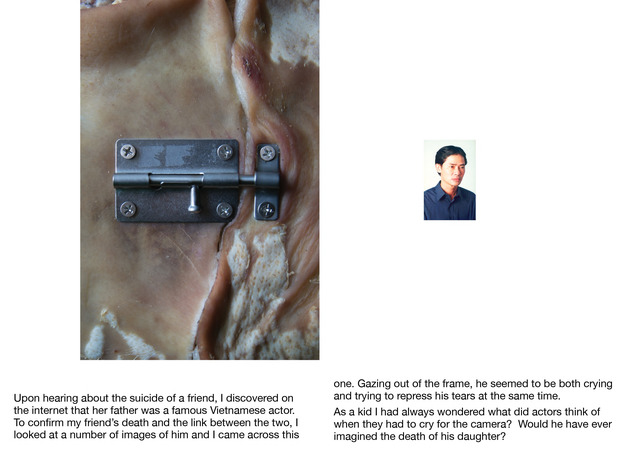 Thy Tran was born in 1988 in Ho Chi Minh City but spent her teenage, college, and early working years in Australia before returning to the city of her birth in 2015. She continues to work commercially, as a freelance fashion photographer but devotes significant time to personal and collaborative projects, exhibiting her work in Asia and in Europe. In 2017, her first book, Cacher (from the French, “to hide”), was published in London.

Thy Tran’s photographs in Cacher have a consistent air of something clandestine: Both the images made in the street and especially her interiors have the scent of rented rooms and anonymity. The photographs are often of the same, partly nude woman seen only partially, suggesting an intimate relationship while at the same time the exclusion of identifying features creates a distancing aspect. The photographer’s presence manifests through voyeuristic view or physical appearance in the image.

The most recent work, an ongoing project, is increasingly stage-managed with a more vivid palette and the introduction of props. These objects, some organic and suggestively edible, others more theatrical, even grotesque, combine with the brilliant reds and other hues that incline toward the symbolic. The photographer is also present in some of this work in varying roles. There is a sometimes-dystopian feel in some of the images provoking a disquieting interest to keep looking and discomfort at continuing to. As Tran moves from documenting the found moment in the existing world to arranging them in a created one, she explores the self and the other in this complex push/pull at once familiar and slightly out of reach. 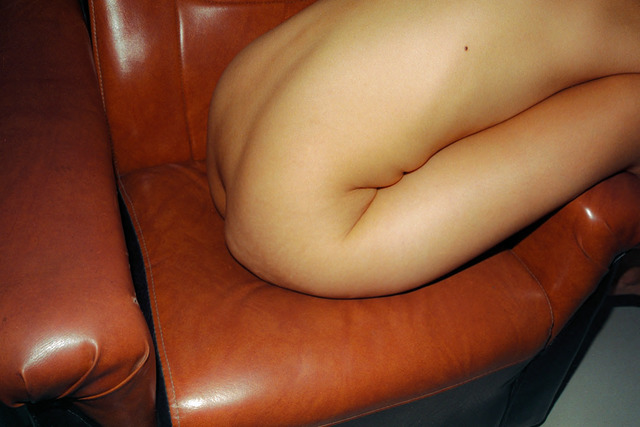 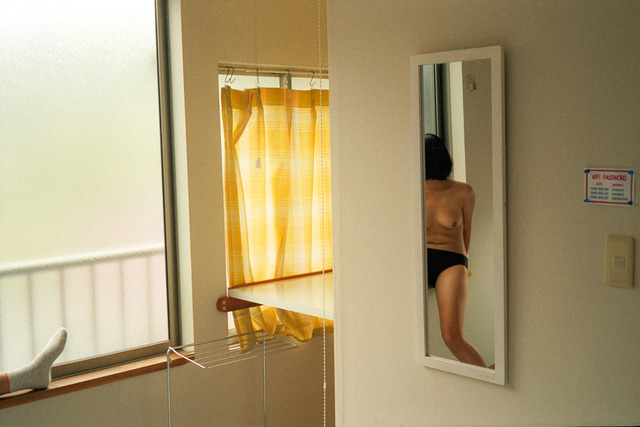 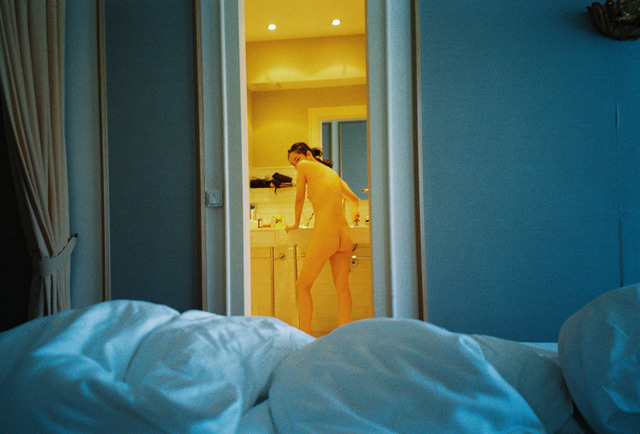 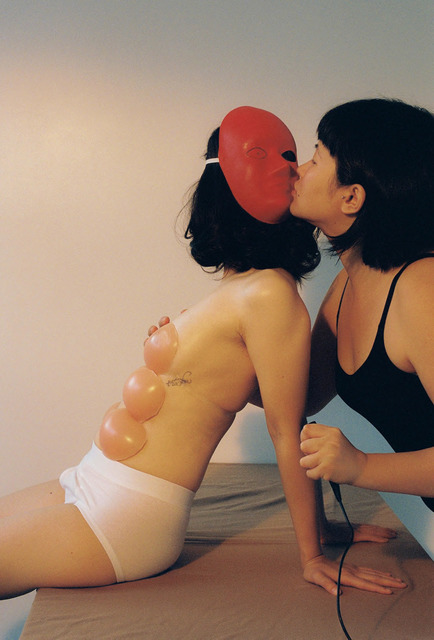 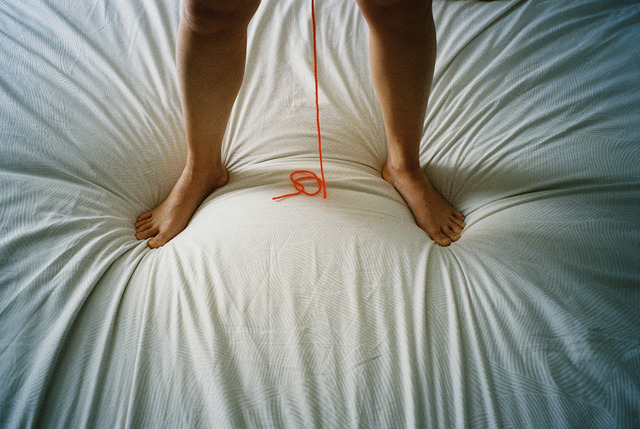 Jamie Maxtone-Graham is a Hanoi-based American cinematographer and photographer.