Some years ago, the historian Richard White proposed a “middle ground” in trying to describe the tense, often violent, but also surprisingly productive relationship between European settlers and Indigenous Peoples in the early history of what is today Canada.[1] The world these people created was certainly not free of misunderstanding or, even less, bloody conflict; but by looking carefully at the many moments of encounter, in between all the bloodshed and brutality, White suggested that the constituencies also engaged in something like a give-and-take that allowed them to live together. They carefully monitored each other, frequently interpreted (and even more frequently misinterpreted) the many actions and gestures of the others, and based on their crude observations and (mis)interpretations, were able to offer and accept a whole series of compromises that were hatched in accordance to what they thought their adversaries would find intelligible and, more importantly, consent to. This relationship operated not only at the level of formal diplomacy but also on the ground in daily interactions. Self-interest ruled the day, of course, but such ambitions always confronted the realities of what was possible to obtain and what overtures and behaviors were mutually understandable. The arrangements and concessions were rarely based on a good comprehension of the others’ beliefs or motives, but they brought about a certain adequacy and tenuous concordance. That’s to say, the people engaged in a series of “creative misunderstandings,” and the accumulation of such things enabled Europeans and Indigenous Peoples to live side-by-side in some kind of balance – “harmony” might be too strong a description. The middle ground was remarkably durable and lasted, in White’s calculation, for more than 150 years.

In White’s proposal, there were preconditions for such a middle ground. Among other features, there could be no centralized government to arbitrate or legislate matters but, instead, a weak state authority. There had to be a relatively evenly-balanced distribution of power among the peoples; those who occupied the middle ground understood their inability, or perhaps merely possessed the belief, that one side could not simply use brute force over the others to achieve their goals. And all had the need or desire to interact with others for the purposes of trade. He therefore located the middle ground in an historically precise context, but that has not stopped others from transplanting the idea to other places and times.[2] Some aspects could be exported whole cloth; others needed tweaking. Middle grounds have appeared around the globe.

I don’t know of any scholar of early Chinese photography who specifically references White, but it’s hard not to feel the force of his ideas rattling about in their work, including some of the best scholarship produced in the last decade focused on photography in the old treaty ports.[3] The historical differences are significant, of course, and shouldn’t be underestimated. Certainly a relentless brute force – the opium wars – helped bring about the establishment of the treaty ports and the opening of China’s interior, and the British occupation and rule of Hong Kong were concessions foisted on the Qing court and most coveted not by Beijing but by big trading companies like Jardine and Dent. The several foreign governments were hardly voiceless in matters of diplomacy, either, and repeatedly pressed their demands. However, the reality on the ground was less one-sided and less rigidly subject to faraway dictates. Europeans and Americans were hopelessly outnumbered and, though ultimately backed by imperial power, relied on contacts, interpreters, insiders, and a whole army of enterprising Chinese middlemen to survive, negotiate and facilitate trade, and finesse the anxieties and demands of officialdom. In turn, recognizing the compromises or just plain ineptness of the Qing court, ordinary Chinese flocked to the treaty ports hoping to make good on new transnational opportunities. Trading of all sorts became the means to flourish and inspired an enthusiasm for creative relationships – and creative misunderstandings – and a series of brokered accommodations that were mutually intelligible among all the constituencies. In these many ways, we can understand photographs as both symptoms and products of a middle ground. In fact, they may have helped to facilitate it. 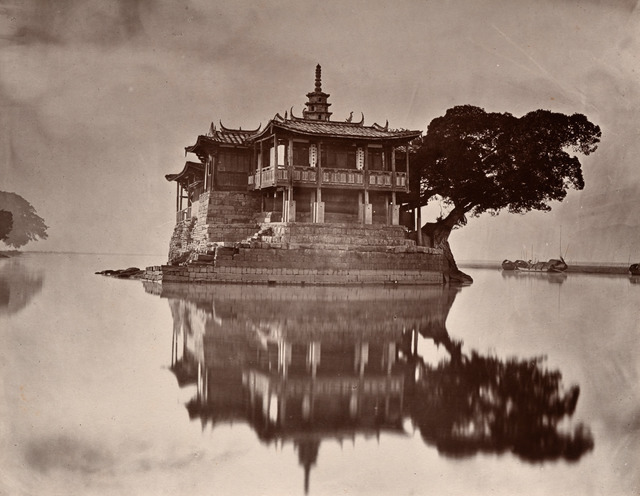 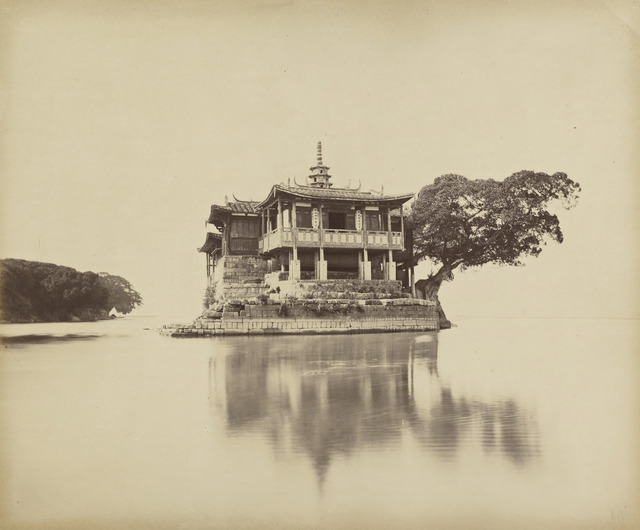 What does such an understanding afford us in our efforts to interpret early pictures? Take the example of John Thomson, the Scottish photographer who famously traveled throughout China during the treaty port era and delivered much of the imagery we now associate with it. It has been customary to view Thomson’s work as reproducing the imperialist’s gaze.[4] But even a casual glance at his pictures suggests that he looked carefully at those being made by others, including the work of Chinese studios; and any gaze imputed to his work was in fact frequently borrowed, mediated, and hybrid.[5] Consider one of his most famous photographs, Island Pagoda (figure 1), usually regarded as exemplary of either the documentary or romantic impulse of the foreigner. Lo-sing (Jinshan) temple floats as if in some no-man’s land, seemingly outside the rhythms of what was indeed modern Fuzhou – a hectic treaty port growing larger and busier with each passing year – and suggests instead an ancient, hermetic, unchanging culture finally being opened to Europeans and the camera’s inspection. Thomson had never previously been to Fuzhou when he took the picture, and it’s clear that he looked to the staples of others to inform his decisions about how to manage his viewfinder. In this case, his choice was taken directly from the example of a local studio called Tung Hing (figure 2), already pumping out volumes of Fujian scenery.[6] Getting to the proper location required a flat-bottomed boat and an oarsman or two. Lucky for him, there was already a small industry among the Chinese who rented their sampans and no doubt knew exactly where on the water to bring visitors for the best vantage.

Pointing to Tung Hing as a source should not, however, suggest to us that the studio was the originator of the image any more than Thomson was, or that it was merely reproducing an iconography that had longstanding precedent in the Chinese visual imagination. Tung Hing produced pictures for the very same audience that made up Thomson’s patrons; and in this it offered imagery that was “mutually intelligible.” It had found subject matters and points of view that represented, more than anything else, a yearning for a certain kind of China, and it was happy to continue supplying it. Or to put it another way, the early photographic cultures that developed during the treaty port era were neither strictly western nor eastern but some shifting agreed-upon form in the space between the two. They were based on the imagination and condition of otherness – of both British and Chinese cameramen imagining the differences and desires of the others and trading their imaginations back and forth in an endless circuit, as if they were exchanging something that had the whiff of the truly indigenous about it.

Nobody would be daft enough to say that the treaty ports were free of power relations or that nationalisms, imperialisms, and their attendant ideological demands did not set many of the conditions for social (and photographic) relationships. However, one of the advantages of the middle ground is that it allows us to bracket them. Or perhaps better, it allows us to see their subtle operation in microcosm. In Thomson’s hands, photography was neither wholly outside nor inside the empire’s strictures but, in good dialectical fashion, grew out of the makeshift accommodations that frequently characterized encounter, at the same time that it was hitched to and facilitated the foreigner’s ambition.

These days, as many brutish nationalisms have developed in relation to the mass movements – and demonization – of people, we are fed a constant diet of imagery that both celebrates and exposes difference. We may benefit from recalling the negotiated operations of the middle ground.

Anthony W. Lee is Idella Plimpton Kendall Professor of Art History at Mount Holyoke College.  He is founder and series editor for “Defining Moments in American Photography”, published by the University of California Press, and has written numerous books on photography, including several on the photography of Chinatowns and Chinese migrants. Lee was Guest Editor of Issue 5.1 of the TAP Review, entitled Photography and Diaspora (Fall 2014).