Born in 1972 in Ar Horqin Banner, eastern Inner Mongolia, Aluss (阿鲁斯) began studying photography in 1995.[1] Three years later, he started to travel across the vast area of Bayanbulak, in Xinjiang, photographing the series “The World After Genghis Khan” (在成吉思汗身后). His early works are often compared to those of Josef Koudelka because of their common interest in documenting the life of exile.[2] His identification with the nomad comes partly from his Mongolian heritage and partly from the experience of living in Beijing as a perpetual “drifter” (北漂).[3] Through his lens, we see the diverse groups of people he met on the road. Specifically, while roaming across China’s northwestern frontier, he frequently encountered and photographed Tibetans.

Horses are a constant theme of Aluss’s work and he often photographs while on horseback. But in contrast with the wide range of moods in Koudelka’s “Gypsies” series, Aluss’s subjects usually appear in an overwhelmingly grimy and underlit atmosphere. Shot almost exclusively with a wide-angle lens, his pictures have great depth of field, as if a photograph’s frame is too limited to encompass the vastness of the landscape. At the same time, his use of a slow shutter (typically set to 1/30 of a second) and film speed also renders the pictures blurry and almost unrecognizable. 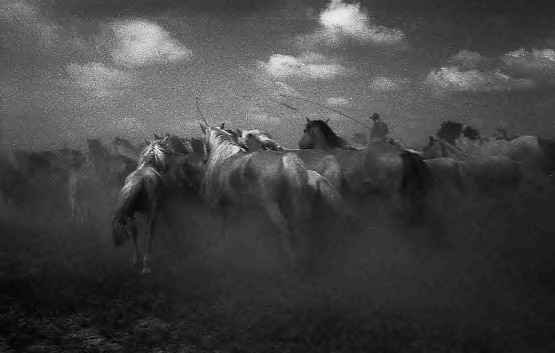 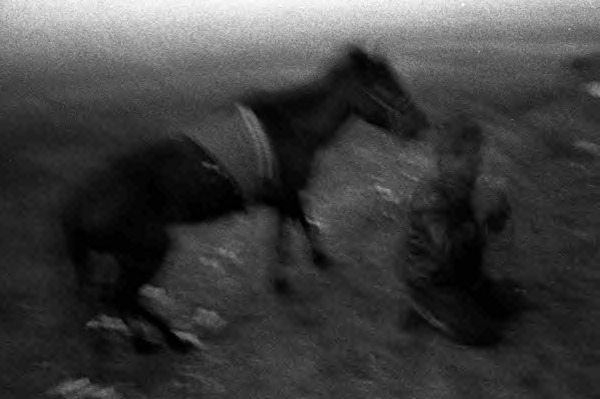 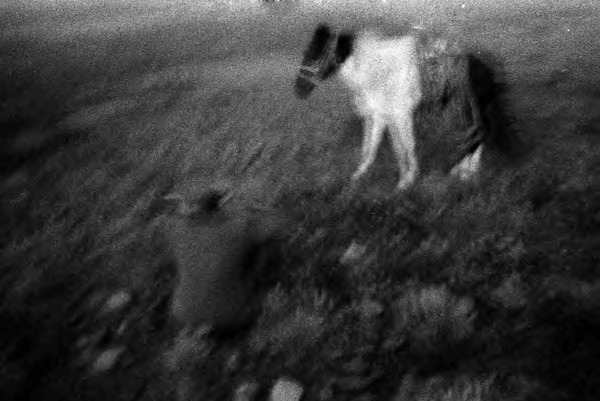 In China, the government’s surveillance of Tibetan settlements, which loosely stretch across the provinces of Qinghai, Xizang, Xinjiang, and Sichuang, is not something new. Since 2011, with the official launch of the “Benefit the Masses” campaign, the government has sent some twenty-one thousand Communist Party cadres to the Tibetan settlements through its “village-based cadre teams” (驻村工作队) program.[4] If the increasing surveillance of the Tibetans reflects the central government’s desire to control a population that in turn desires independence from China, the mystifying visual quality of Aluss’s photographs posits an alternative.

His rejection of clarity and perspicuity challenges conventions of the documentary genre consolidated in the late nineteenth and early twentieth centuries. The pioneers of this genre used their cameras to represent non-bourgeois people. Jacob Riis’s famous How the Other Half Lives (1890), for example, addresses middle-class viewers who would like to understand the poor dwellers of New York City but are too afraid to set foot in the city’s tenements. By dramatically reducing the amount of visual information that a photograph contains, Aluss denies the beholder’s direct access to the photographic event and declines the medium’s claim for truth and knowledge. Here, the word opaque is most fitting to describe the relationship between the photographer and his subjects. As the poet Edouard Glissant points out, opacity, “gives up this old obsession with discovering what lies at the bottom.[5] By turning away from any notion of truth or reality, while flirting with the pictorialist idea of art photography, Aluss also denies any presumed relationship between photographs and knowledge.

Aluss himself uses the word anlian (暗恋) to describe his relationship to his subjects. The Chinese word anlian, though hard to translate, literally means an opaque affection one develops for another. It has both the thrill of an infatuation and the timidness of a crush. It is an affection that refuses to mature into a more sustained project of loving and yet thrives in the very moment of hesitation.

Instead of asserting oppositions between a self and an other, an observer and an observed, Aluss situates himself inside the landscape and conveys the bodily senses of being-in-that-place to his viewer. For example, in a panoramic view taken in the Tibetan area of Southern Qinghai province in 2008, we see six backlit figures standing in front of the distant mountain ranges, each engaged in some form of labor but none looking directly at the camera. Only through the limited areas of highlight can one discern the shapes of their bodies and perhaps the texture of their clothes. Instead of producing photographic documentations of types or specimens, Aluss is more attentive to the general atmosphere (qifen, 气氛) of a given moment. In so doing, he also destabilizes the sense of omniscience associated with the panorama format, which emerged in the late nineteenth century through the work of Felice Beato and others in their colonial expeditions to the Far East.

Although Aluss believes that nomadic life is in decline, his photographs differ fundamentally from the salvage ethnography of the nineteenth and early twentieth centuries. As James Clifford points out, “[T]he salvage paradigm, reflecting a desire to rescue something ‘authentic’ out of destructive historical changes,” denotes an “ideological complex.” For this ideology to work, one must subscribe to a conception of history as linear and non-repeatable: “There is no going back, no return, at least in the realm of the real.”[6]

Within this framework, photography was once imagined to be the ideal medium for cultural preservation. Edward Curtis’s forty-volume The North American Indian, which opens with The Vanishing Race — Navajo, is often regarded as representative of the paradigm. In the context of Tibet, the Republican-era Chinese photographer Zhuang Xueben also offers an interesting point of comparison.

In both regards, Aluss’s work is very different. By deliberately perverting darkroom protocols, retaining traces of chemical reactions, he explores photography’s ability to document processes of its own transformation, creation, and decay. His insistence on shooting with analog film enables him to show the degradations of nomadic life through the photograph’s materiality. Meanwhile, the chemical traces left on the photograph’s surface obscure the image and hinder the viewer from obtaining more information. And because of Aluss’s indifference toward narrative, what Cartier-Bresson calls “the decisive moment” is nowhere to be found. The only kind of change and progression of time we are able to see belongs to the surface of the photograph itself. In the cyclical notion of time believed in by Mongolian and Tibetan Buddhists, the Western notion of progression is meaningless.

Similarly, the temporality of Aluss’s work operates on a logic that sees photography not just as an agent of memory but also as a sign of change. Such change can be as minute as the material deformation registered on his photographs or as grand as the disappearance and emergence of a given culture. It is precisely the circuitous change that is bestowed on all living things that ultimately makes a photograph a matter beyond nostalgia. In return, it imbues Aluss’s work with a refreshing creativity, a creativity that escapes the photographer’s conscious framing.

Nevertheless, faced with the overwhelming forces of industrialization and urbanization, the disappearance of pastureland and nomadic life is an overarching theme of Aluss’s work. Even in photographs of life at its fullest, depictions of children playing and horses galloping, there is an underlying anticipation that these activities could evanesce in the blink of an eye. The images we see are not fixed in both the literal and figural sense of the word; they are glimpses of a culture that is in flux. Such a treatment of motion and stillness essentially breaks the division that had long been used to distinguish photography from other modes of visual representation. For example, John Berger’s idea that photographs are “retrospective and are received as such” whereas films are “anticipatory” cannot be neatly applied to these photos.[7] Unlike film, which, when used to record motion, shows us exactly how an object completes its movement, the jerky trajectories inscribed on Aluss’s photographs are indefinite in the sense that we do not know in which direction things are moving. Many of his horse photographs, shot with long exposures and from a high angle, register motion in the most abstract form. In many instances, it is impossible for the viewer to discern what exactly is being photographed.

Perhaps this unknowingness best describes the traveler’s relation to time and space. It is also a part of the experience of being on horseback, where one is always confronted with the prospect of changing one’s course. The use of a slow shutter, which allows him to capture motion and landscape as passing frames of blur, is accompanied by the centrality of fieldwork. “I’m traveling” is always the reply to my attempted correspondence with the artist. “I will write to you when I am back to Beijing,” he says. For him, the duration of being in the field is crucial because it gives him the access to scenes otherwise not available to outsiders. In 2008, in the midst of a riot among Tibetans across the country in protest against the Beijing government before the Olympics, his camera moved comfortably among the herds and families, indicating a certain degree of trust from the groups that he was photographing. 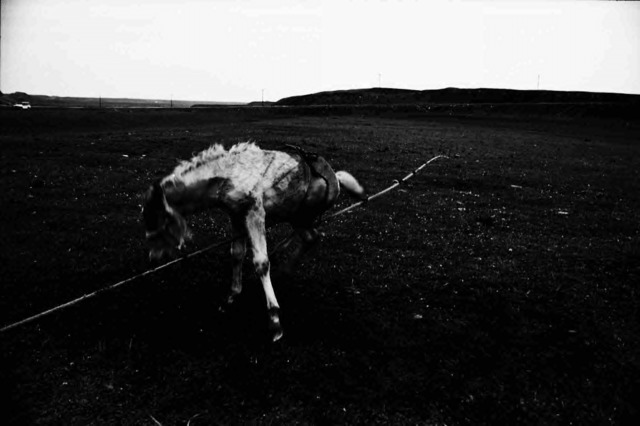 Being neither an insider nor an outsider of the cultures that he is documenting, Aluss himself embodies the change one sees in his photographs. In the course of China’s rapid economic developments, the primitivism attributed to nomadic lifestyles is seen as increasingly fraudulent. Besides his identity as a photographer and a Mongolian, he is running a whiskey bar in Beijing, actively involved in a culture of the newly risen urban chic. Tucked in a hutong away from Nanluogu Xiang, the city’s bustling center of cultural tourism, the bar offers a cozy and quiet space for its patrons. Perhaps it is precisely in this space of change, one that oscillates among art, traveling, and business, that Aluss makes complex what we might have thought to be the “nomad.”

Jiangtao (Harry) Gu is a PhD Candidate in the graduate program for visual and cultural studies at the University of Rochester, where he also holds an Andrew D. Mellon fellowship in Digital Humanities. His research focuses on the history of photography in China, colonialism, the formation of the modern Chinese subject and the nation state. Email: jiangtao.gu@rochester.edu