Outside the expected venues of art photography and reportage, we see individuals, communities, and organizations addressing environmental problems through the creative use of imaging and communications technologies. The three projects briefly presented here suggest some of the ways that these technologies — both widely accessible and highly specialized — are being used to support environmental interventions in China, Tibet, and Indonesia.

In China, among other countries, social media function as important platforms for communication and discussion about environmental problems. In an example reported on National Public Radio,[1] in 2013 an activist named Deng Fei posted this question on Weibo, the Chinese version of Twitter: How is the river in your hometown? He received numerous photos and stories about pollution in response.

In November 2014, Hampshire College student Bryan Li researched the use of Weibo and WeChat — two popular social-media platforms — by Chinese citizens concerned about air quality. He found a variety of photographs circulating, many of them ironic, such as one of a wedding party in formal evening attire in which everybody wears a face mask.

One of the most ambitious projects was by a man named Zou Yi, who in 2013 photographed the Beijing skyline outside his window every morning to document the visible changes in the air. Gradually he assembled these individual photos into an “air-quality grid.” We see here the complete 2014 grid, entitled “Beijing at a Glance: 2014 (Season 2), 365 Days of Beijing Air Quality.” His project, published on social media, inspired people in other Chinese cities to undertake similar “At a Glance” projects, monitoring the appearance of the air around them and then posting their grids of photographs. 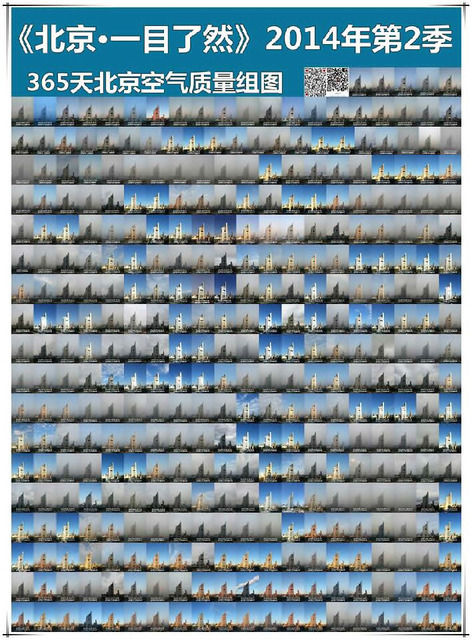 Although the grid format had already been used by artists and activists in China, we were particularly interested in the way this project circulated, through social media, among people who were probably not professional photographers or scientists, as a form of popular action.

In addition to social media, cell phones enable people, especially in rural areas, to collaborate and share photos, even off the network. Olivier Krischer interviewed the Indonesian artist Arahmaiani, best known for her performance and installation artworks, often created collaboratively with people who are marginalized or have been struck by disaster. Since 2010, she has been working on environmental projects with a monastery of some five hundred monks in the remote Tibetan village of Lab, in China’s Qinghai province, which that year was severely damaged by an earthquake. Although the tragedy brought her to this area, once in Lab she learned of the vital role the icy Tibetan plateau plays as the source for Asia’s major rivers. This means that environmental degradation here affects potentially up to half of the world’s population. 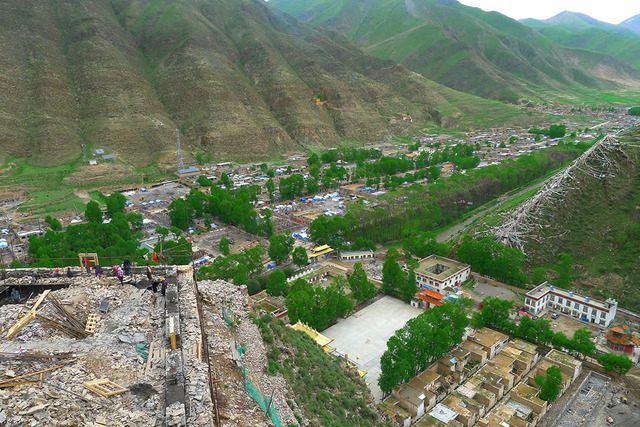 Photograph by Arahmaiani. Lab shortly after the earthquake, showing reconstruction on part of the monastery (left), while in the valley many temporary blue shelters dot the township. 2010, © Arahmaiani, courtesy the artist.

In Lab, while earthquake reconstruction was under way, Arahmaiani noticed what seemed to be an earlier issue: rubbish. Working through translators, she initiated a project to clean up the village and the surrounding valley, which meant convincing the monks to participate in labor customarily considered unbefitting their social status. When Arahmaiani then proposed to plant trees in the area, she discovered that the 13th Lab Rinpoche, a historical figure of great importance to the monastery, had initiated a planting project a century earlier — the “mother tree,” which still has its own shrine in the precinct. In the current collaboration, the community began to develop a new relationship with the land, the lay inhabitants, and neighboring monasteries. Residents are now starting to cultivate organic vegetables and reintroduce traditional medicinal plants, as well as establishing a “yak bank” to help maintain this essential livestock. 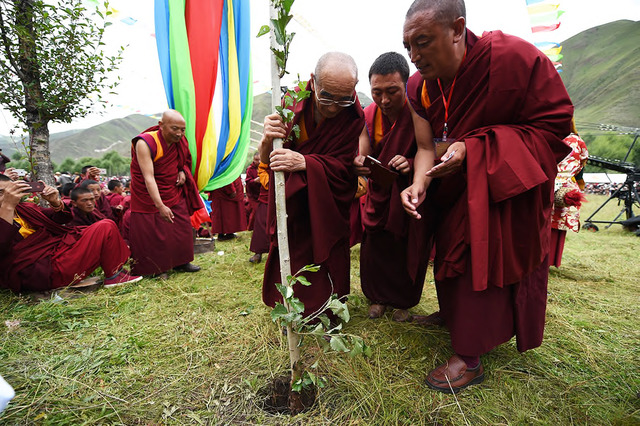 These recent initiatives have rekindled interest in the township’s history and monastic rituals, and have won the support of the lay Tibetan community and even local government. Many of these projects have also been embraced as ways to preserve and revitalize the sustainable cultural practices that were once strong throughout the Tibetan plateau but have been affected by historical conflicts, poor agricultural policies, or changing lifestyles. “As for the next step,” says Arahmaiani, “we are working on alternative energy, and generating and managing income from our products (milk, cheese, yogurt, barley, various vegetables). This will take time, so we just do it step by step.” She now spends two to three months a year in Lab. 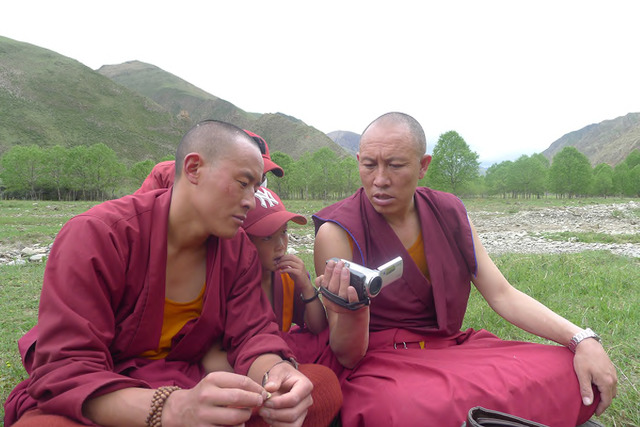 Photograph by Arahmaiani. Arahmaiani’s first assistant, Sonamrinchen (assigned by the monastery), using video to explain the environmental activity in Lab to a young monk who had just joined the project in its second year. 2011, © Arahmaiani, courtesy the artist.

Meanwhile, the monks are documenting progress of this environmental work with cell phone and video cameras; they send pictures to Arahmaiani and share them in their community. It is not clear how widely such images can circulate on the plateau, but just as they have adopted Arahmaiani’s project as their own, building it into their history and reconciling it with their culture to suit their contemporary needs, the monks are evidently making enthusiastic use of new visual technologies to record and pass on Lab’s environmental and cultural revitalization experience.

Humans have long been intrigued with the bird’s-eye view of their world. The first aerial photographs were made from hot-air balloons in the nineteenth century. In the twentieth, photographs from aircraft became possible, then images made from satellites outside Earth’s orbit. Now, in the twenty-first century, satellite images are widely accessible; they are used for a variety of purposes by governments, corporations, nonprofit organizations, and individuals. 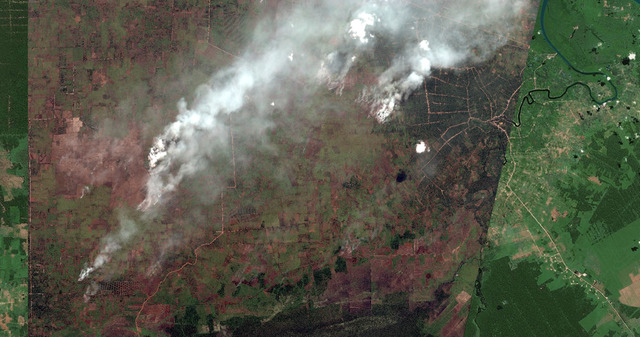 We would like to call attention here to the work of the nonprofit organization Global Forest Watch (GFW) (www.globalforestwatch.org), an initiative of the World Resources Institute. GFW has partnered with the private satellite company Digital Globe to track the health of forests worldwide via satellite imagery. One of its projects, undertaken in collaboration with government authorities in Indonesia, involves monitoring the forest fires that are deliberately set to clear peat land for palm-oil plantations. In addition to being illegal, these fires devastate the forests and fill the air with a toxic, smoky haze. Digital Globe provides GFW with high-resolution satellite images that enable it to pinpoint the location of fires as they blaze. GFW staff overlay the images with maps and present this information to local authorities, who are then able to put out the fires and, in some cases, take legal action. 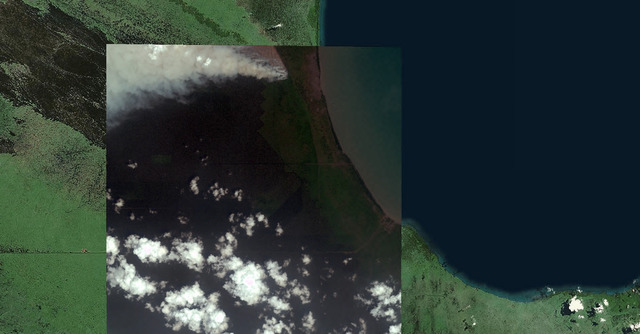 This project is a model of successful collaboration between nonprofit, governmental, and commercial sectors. Before it began, in this region response time to forest fires averaged thirty-six hours; now it is down to four hours, the result of timely visual information and communication. In this example, satellite images generate information that is interpreted and used as a basis for constructive intervention.

WITH THE RAPID development of communications technologies, their potential for multiple uses has also increased. Here we have shown the possibilities of imaging technologies as they call attention to, or support, initiatives aimed to solve environmental problems. The example of Lab also demonstrates the way diverse traditional communities can incorporate such technologies into local histories and practices.

Also of significance is the way each of these examples combines aesthetics and empowerment: In Lab, the project began with the idea of land beautification and has developed into a means of sustaining or rekindling traditional knowledge; the striking “air-quality grids” of Zou Yi and others in China make it easy to disseminate information that might otherwise be too abstract or even politically sensitive; and although satellite images invoke a spectacular “otherworldly” viewpoint, here they have become vital sources of real-time information that engenders direct local action and collaboration.

Images have almost always mediated events of significance. These examples suggest just some of the future possibilities for visual technologies in the hands of organizations, individuals, and communities creatively addressing urgent environmental issues.

Olivier Krischer is a postdoctoral research fellow with the Australian Centre on China in the World (CIW), at the Australian National University. He is currently researching China-Japan artistic relations in the 1980s-1990s, as well as networks of creative activism across East Asia. He is co-editor of Asia Through Art and Anthropology: Cultural Translation Across Borders (Bloomsbury, 2013).

Sandra Matthews is Editor of the Trans Asia Photography Review, and Associate Professor of Film and Photography at Hampshire College.