In China, there is not a single day without a newspaper or website reporting some minor or major environmental disaster. One that speaks deeply to the public is the sad news that the one-hundred- and-fifty-million-year-old Chinese sturgeon in its natural habitat is extinct, as experts from the Fishery Science Academy discovered that it could no longer breed, except artificially, because of the severe pollution of the Yangtze River.

At the same time, the regular alarming level of PM2.5 readings about the smog hanging in the Beijing sky led Premier Li Keqiang, in March 2014, to declare war on pollution. By end of February 2015, former CCTV presenter Chai Jing had produced a powerful documentary, Under the Dome, which describes the findings of her yearlong investigation into atmospheric pollution. It was viewed more than two hundred million times in just a few days, right before the meeting of the People’s Congress. The appointment of the dean of Tsinghua University as minister of Environment Protection gave us some short-lived optimism, though, as Chai Jing’s documentary was immediately censored and removed from all websites and blogs in China.

If air pollution affects primarily the urban dwellers in our developed and industrialized cities, for the masses living in the rest of the country, contaminated water is an equally serious concern. China’s own Ministry of Land and Resources, after monitoring close to five thousand sites in more than two hundred cities, has proclaimed that some 60 percent of all underground water is unsafe to drink. Although the Chinese Supreme Court has announced that it will reduce the court fees required for environmental groups to bring lawsuits against polluters, the battle with the industries remains a daily struggle. According to the Ministry of Environment Protection, of the existing 3,622 water-treatment plants in China, during the past six years there were 4,961 violations. And most recently, worries were raised about the risk of pollution in rivers and lakes along the route of the water-diversion project (from south to north) and that polluted water could enter the tap-water system of Beijing.

In that context, the work of one of the most famous foot soldiers in this war against pollution stands out with heightened urgency. Lu Guang, who is a “lone wolf” among Chinese photographers because he is not affiliated with any official media group, just received another distinction: third prize at the 2015 World Press Photo Award in the category “Long-term Project.” Self-employed, he has embarked since 1993 on a series of social documentary projects on topics such as gold diggers, coalminers, and drug addiction in Southern Yunnan Province. His reporting on AIDS villages in Henan earned him his first international recognition, a World Press Photo First Prize in 2004, and he has gone on to win numerous other awards. By 2005, Lu Guang had undertaken a ten-year project to document the pollution of the seven major rivers of China, which won him the Eugene Smith Grant for Humanistic Photography in 2009 and a National Geographic Photo Grant in 2010. Taking risks even to his own health, Lu Guang continues to roam China’s “mountains and rivers” (“Shan Shui,” in Chinese, referring to landscapes in traditional ink painting).

Over the years, Lu Guang’s works have inspired other young Chinese photojournalists to take up the issue of pollution, but he remains one of the few showing the human face of the consequences of pollution, with poignant portraits of cancer victims and children with birth defects caused by contaminated water. Unlike other come-and-go photographers, Lu Guang’s compassionate nature often wins him the trust of farmers and fishermen, enough to inspire them to guide him to the sources of pollution, to witness the blatant violation of regulations by the local industries. He would often stay in their homes for some time, writing down their stories, even taking them to the hospital for treatment should the need arise.

In March 2014, I introduced Lu Guang at a forum organized by the NGO “China Water Risks” in Hong Kong. The fifteen pictures you will see here are only a portion of the images we projected on the screen — two hundred and fifty — which had a haunting impact on the audience.

Lu Guang’s documentary style is to bring viewers right into the action, forcing our noses to the unbreathable and our eyes to the unwatchable. In his own words: “In the past ten years I have been crisscrossing the land of China, from east to west, from north to south, covering China’s seven major river systems and three lakes, for a major survey of water pollution in this country. As China has turned into the world’s largest producer of all sorts of products — low-priced products are manufactured in China and exported to the rest of the world — but pollution created by the industries stays in China. The main polluting industries are smelter plants (steel, aluminum, zinc, and other metals), chemical plants, paper mills, coal-burning power plants, tinting and dyeing plants, tanning, and electroplating. These highly polluting industries are distributed mainly along the seven key rivers because production requires water. But these industries also discharge toxins into the water, especially chemical plants. China has more than twenty thousand chemical plants and 60 percent of them are located along the Yangtze River, the Yellow River, and the coastline. The world’s chemical giants have all established branches in China, and some of them have even relocated all their operations to China.” 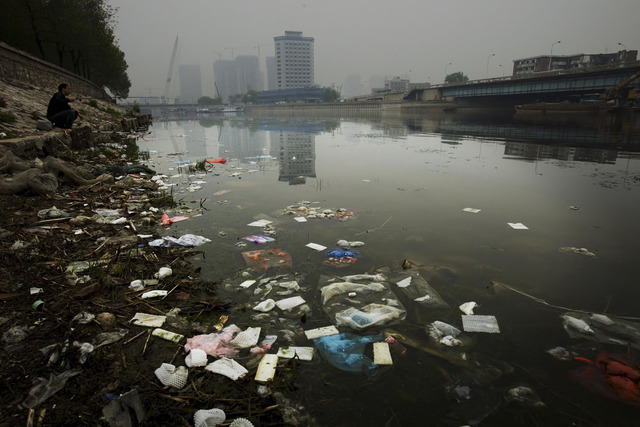 The seven major rivers ranked according to the degree of pollution as released by the Ministry of Environment are:

The national testing standards for major river-pollution indicators are total phosphorus, total nitrogen, and the chemical oxygen demand (COD) index. According to my own observations of the wastewater discharges of these rivers, the Yangtze has the most. Because of the huge amount of water in the Yangtze, the pollution indices are comparatively low, but by the volume of wastewater discharge, it ranks number one. The second-most polluted is the Yellow River. Most industrial parks involving coal and chemical plants are established on both of its banks, from the upper stream in Qinghai down to Gansu, Ningxia, Inner Mongolia, Shaanxi, and Shanxi Provinces. Then we have the Pearl River and its tributaries. 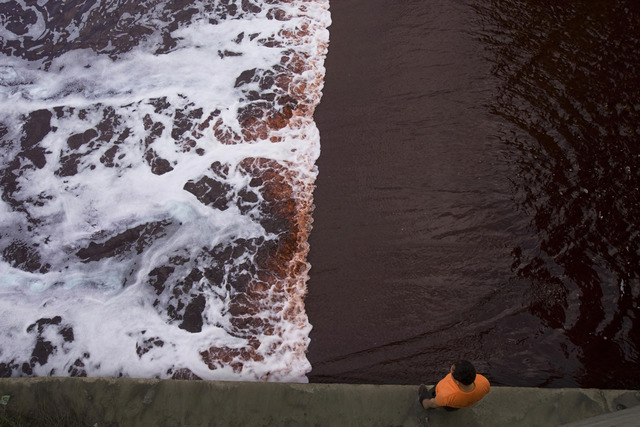 Lu Guang #2717 / Hebei Province, Xian County. The water from upstream Ziya River is so polluted that it turned red. Locals say for that for more than 20 years, dirty water has always been flowing. Even the underground water has been contaminated, but locals still use it for consumption. 2010.5.5.

he Hai is the main river system in the northern territories of China. The North is usually dry, with low rainfall; therefore, the stream is very weak. Hai River water is black or dark red, and its tributaries help discharge the wastewater directly into the Bohai Sea. 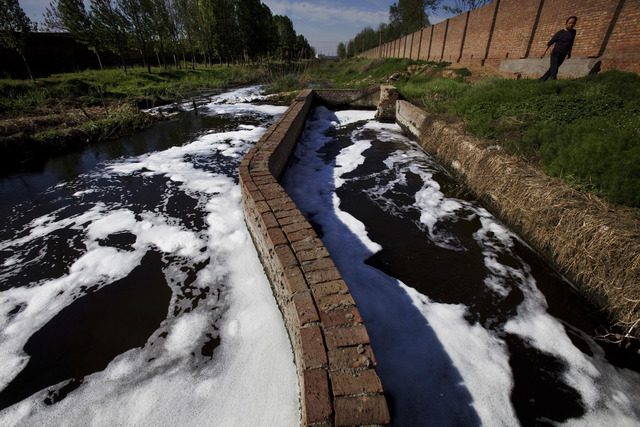 The Zhaozhou stone arch bridge is located on the Xiao River — a tributary of the Hai River — five miles south of Zhaoxian, in Hebei Province. Built in 610 CE, it is the world’s oldest intact stone bridge and is classified as a national conservation monument. But the arch bridge is now threatened by corrosion at its foundations because of the severe pollution. 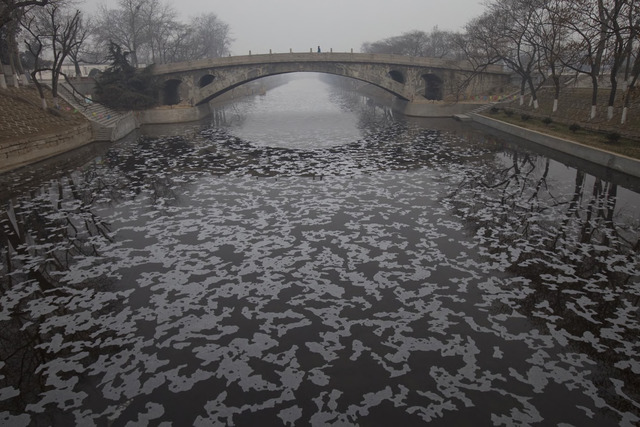 Lu Guang #8025 / The 1,400-year-old Zhaozhou Bridge is affected by corrosion from wastewater flowing through Shijiazhuang City. 2012.3.5. 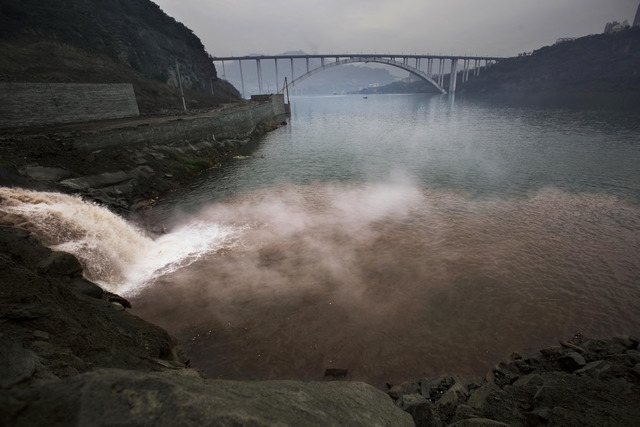 Lu Guang #4664 / Wastewater from Chongqing Wanzhou Yihua Chemicals is being dumped into the Yangtze River. Each day, water of different colors is discharged 24 hours a day, nonstop. 2009.11.19. 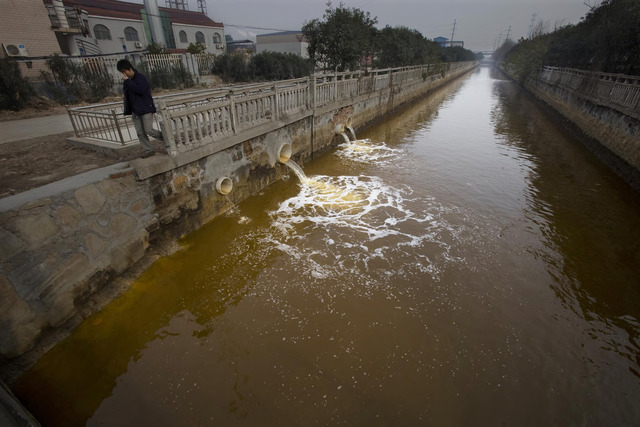 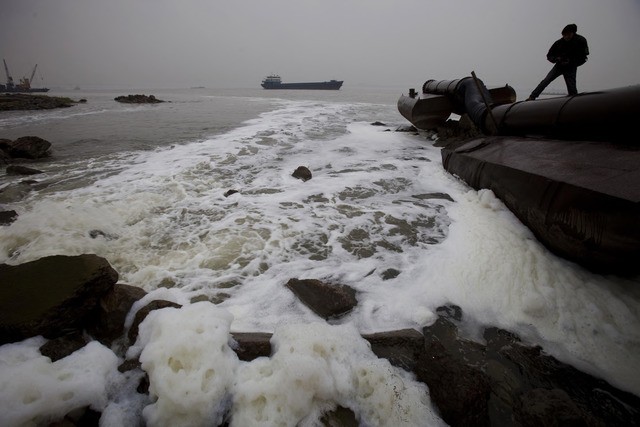 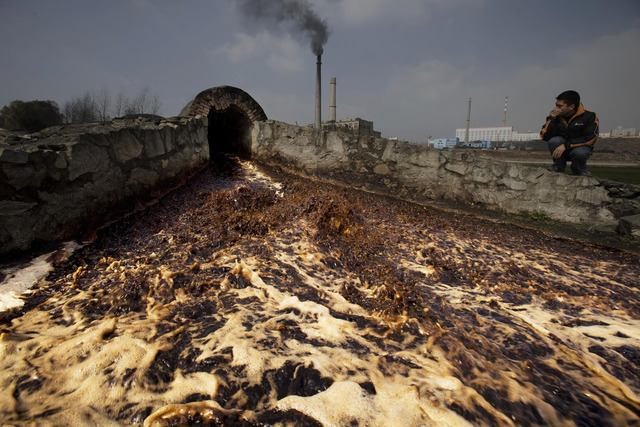 Lu Guang #7639 / The Jiujiang Synthetic Fiber Factory discharges its dark brownish wastewater into the Poyang Lake Nature Reserve of Jiangxi Province, which is under national protection. 2009.12.17. 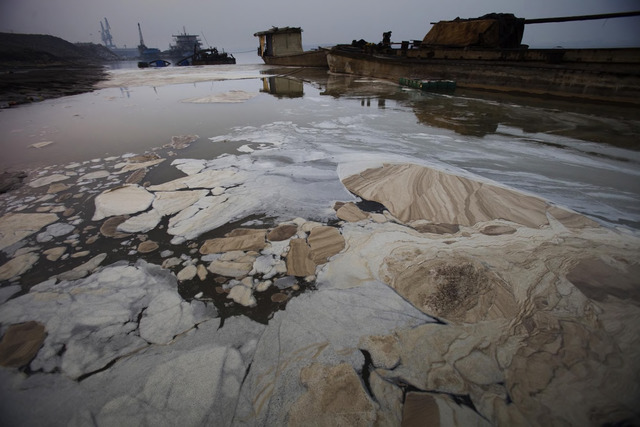 Lu Guang #8947 / Anhui Province, Tongling City. The Guangxin Chemical Plant is built on the bank of the Yangtze. At night, its wastewater is discharged into the river through a pipeline buried underground. 2010.1.9. 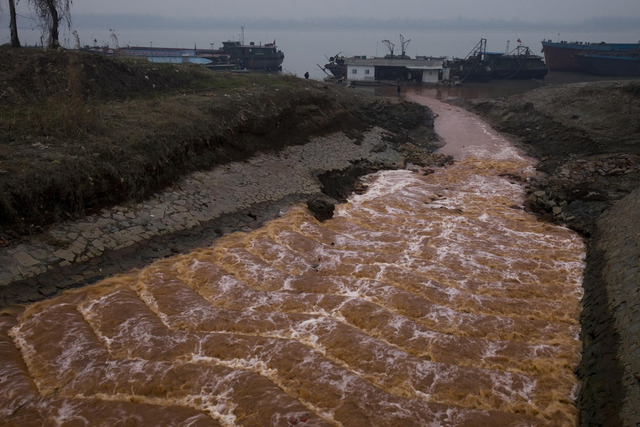 Lu Guang #9231 / Anhui Tongling, the Tianmashan Gold Mining Company’s ore-washing plant, discharges its wastewater, without any treatment, through the Heisha Stream directly into the Yangtze River. 2010.1.9. 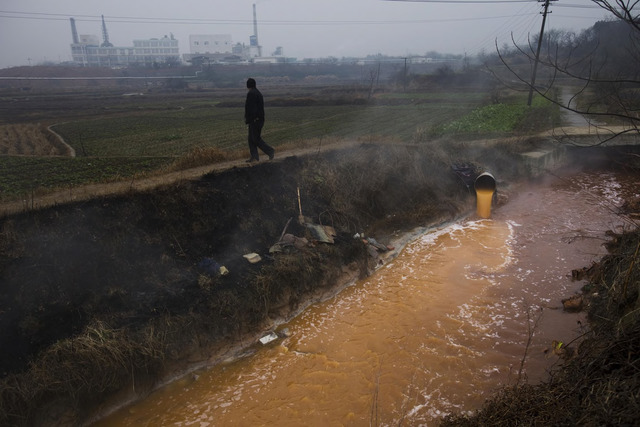 The Taicang Yanglin Harbor, on the Yangtze River, where fifty fishing households live, has an infamous reputation as another cancer village. 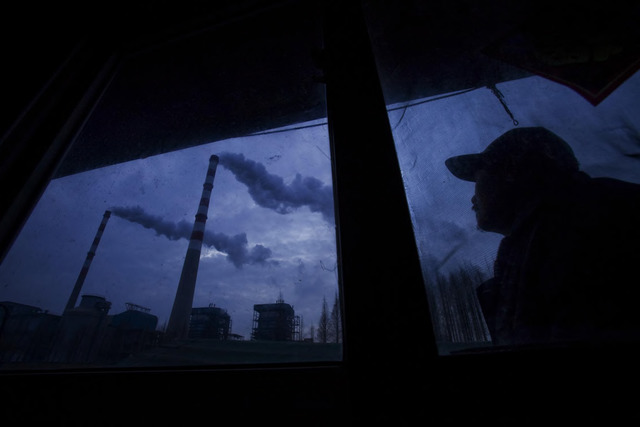 Lu Guang #2876 / Some 50 households of fishermen’s families live here in the Yanglin Harbor of Taicang. Since 2002, the growth of chemical factories, paper mills, and power stations has dangerously polluted both the water and the air. Fifty-five-year-old Li Shizhong was diagnosed with esophageal cancer in March 2007. After surgery, he can no longer work, and must undergo therapy and take daily medications. 2010.3.7. 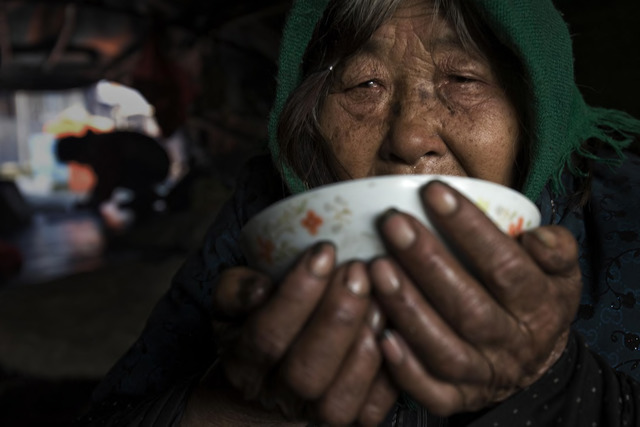 Lu Guang #4326 / Taicang Yanglin Harbor. Hu Zhenlan has spent her whole life on a fishing boat. While her son is catching fish in the Yangtze, she looks after the younger children. 2010.3.10. 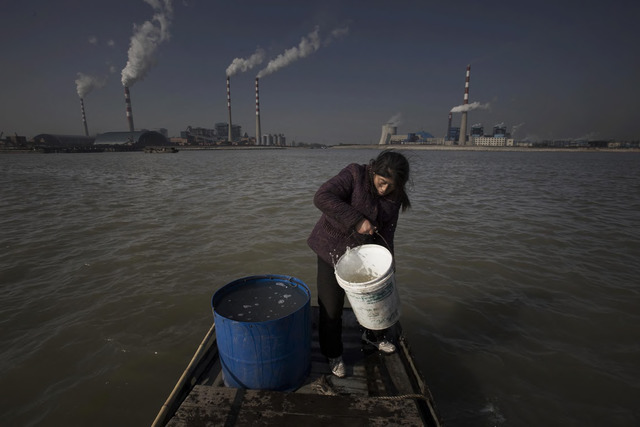 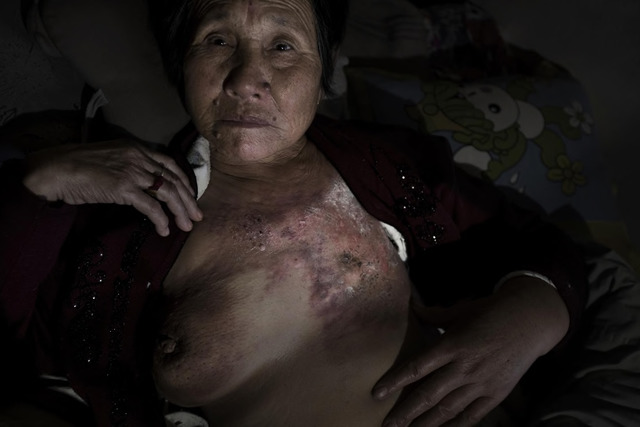 Lu Guang #5188 / Taicang Yanglin fishing village, in Jiangsu Province. Wang Jinnan, who has always lived on the Yangtze, had breast cancer five years ago; now the disease is recurring. 2009.12.2.

In certain cases, Lu Guang’s photography has helped cancer-affected villages to have tap water installed instead of digging wells or the population relocated away from the contaminated soil and water. Although the national consciousness has been heightened, he thinks in some places the issue is getting more serious.

“In the past,” he says, “factories were usually quite small. They neither had good equipment, nor wastewater-treatment facilities. The wastewater was usually discharged to the rivers right next to the factories, so you could easily see and take photos in case of any wastewater-discharge violation. Now, the factories are getting bigger and have more money. Some don’t use the money to treat wastewater but instead spend it on burying pipes deeper underground to illegally discharge it. So now it is more difficult to eyewitness such violations. Recently, I heard from the news that the tap water from about a dozen cities in China has a strange smell. The groundwater has probably been polluted due to underground discharge.

“We want people to drink clean water,” he says, “so that they can have a better life. We need a green planet so that we can safely breathe, so that we can live in harmony and our civilization can develop and prosper.”

Based on captions written by Lu Guang for his presentation on March 20, 2014, for the China Water Risk forum in Hong Kong.

Lu Guang was born in 1961, in Zhejiang Province, China. He has been passionate about photography since he held a camera for the first time, in 1980 when he was a factory worker in his hometown in Yongkang County. Between 1993 and 1995, he took classes at the Fine Arts Academy of Tsinghua University (formerly the Central Academy of Crafts and Fine Arts) in Beijing. A freelance photographer since 1993, Lu Guang has developed major documentary projects in China, all at his own initiative, focusing on some of the most significant social, health, and environmental issues facing his country today.

Jean Loh is a photography curator and critic based in Shanghai, where he is founder and director of the Beaugeste Gallery. His recent activities include judging the photo competition From Self-Portrait to Selfie at the 2015 Yangon Photo Festival, and curating the exhibition 80th Anniversary of Studio Harcourt, at the Dalian Art Museum in December 2014.