How do photographers convey or visualize humor, and can one culture’s humor translate into another? Can something be funny even if the viewer may not understand specific national nuances? Surveying the work of Yuki Aoyama (Japanese), Bui Huu Phuoc (Vietnamese), Benz Thanachart (Thai), and Jeongmee Yoon (Korean) suggests answers.

First, all four (along with many Western photographers) would say to Cartier-Bresson’s notion of the decisive moment their languages’ equivalent of “Phooey.” They’re more interested in the performative, setting up their frame as a stage for their witting or unwitting subjects. In each of the photographers’ work, there is an investigation of people’s societal roles. Then they sprinkle in a dash of humor, via various visual strategies, to flout and upend the very conventions of their enactments.

The Japanese photographer Yuki Aoyama overtly set out to be amusing.

The title of his series “Solarymen” combines sola, which means “sky,” with salaryman, the word for a particular type of Japanese office worker. These businessmen are stereotypically regarded as hardworking drones with a monotonous regimen: work all day, do yet more work without overtime, spend late nights drinking with the boss, return home, sleep, get up, and repeat. By momentarily liberating the men from their earthbound existence, Aoyama deliberately reverses this typecasting. His inspiration was his salaryman father; it was only at his funeral that Aoyama came to understand the actual complexity of his life.

After the devastating Tohoku earthquake, in 2011, Aoyama thought his photos of flying salarymen would lift people’s spirits. Although Philippe Halsman’s “Jumpology” isn’t an antecedent here, the effect of Aoyama’s imagery is not dissimilar to that of his American counterpart. As Halsman explained, “When you ask a person to jump, his attention is mostly directed toward the act of jumping, and the mask falls, so that the real person appears.”

Aoyama gives his subjects the unforeseen opportunity and space to let go. Even though some subjects approach this permission with the same dogged intensity as their work, destabilizing the standard notion of salarymen makes for a kind of uplifting silliness that results in a laugh. Or at least a smile. 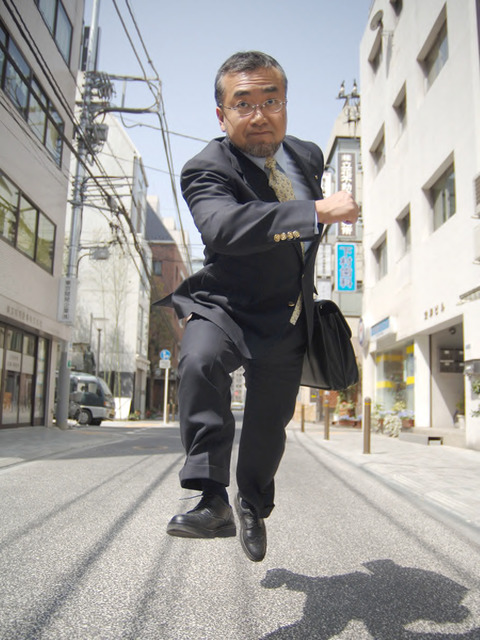 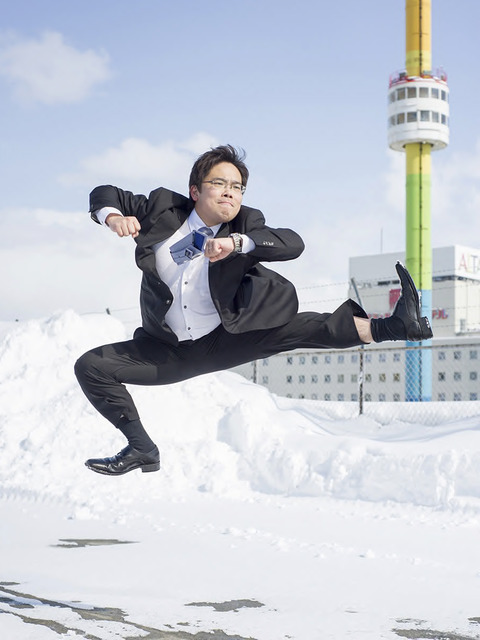 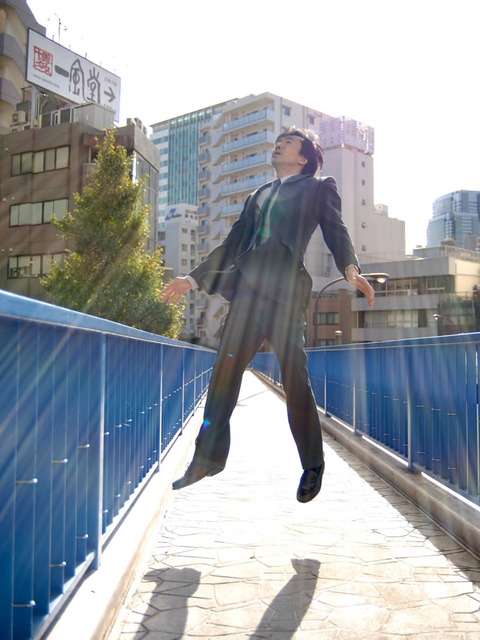 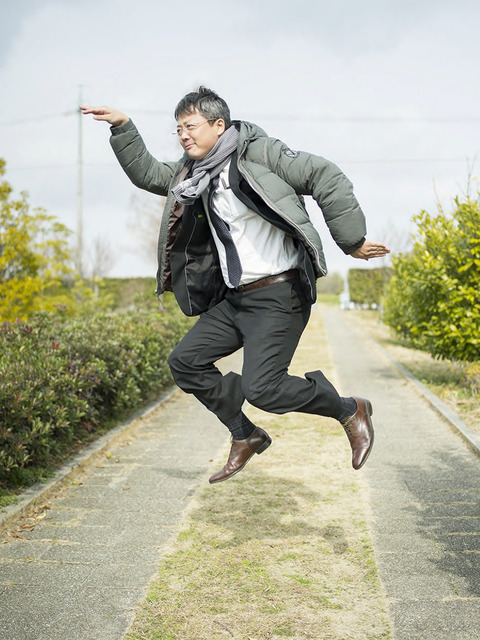 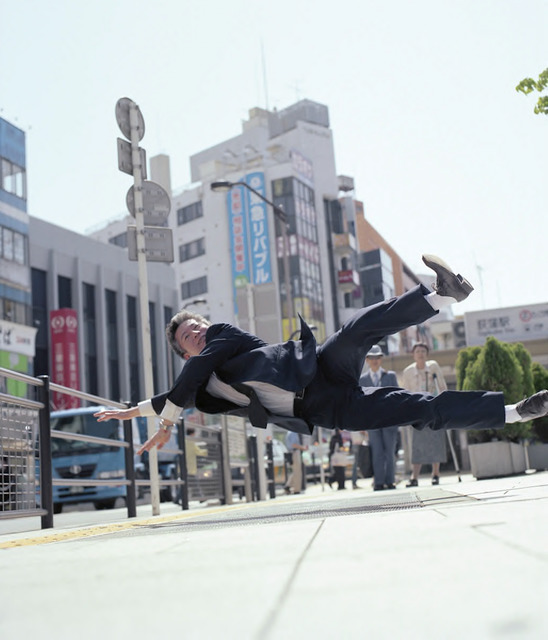 Bui, who lives and works in Ho Chi Minh City, handles humor in a deadpan way that pokes fun at the seriousness of the photographic enterprise and the subversion of it by the photographer. Bui’s job was to provide ID pictures for official documents, a task he did well and professionally. When his duty was finished, however, he pulled back from both his subject and his authorized role. Suddenly the viewer sees a far more disorderly and rumpled world. Though we certainly know this world exists, the pictures provide an unexpected backstage-like view that comes as a shock. The result: laughter, aimed not at the sitter but instead at the surprise that Bui has managed to pull off. 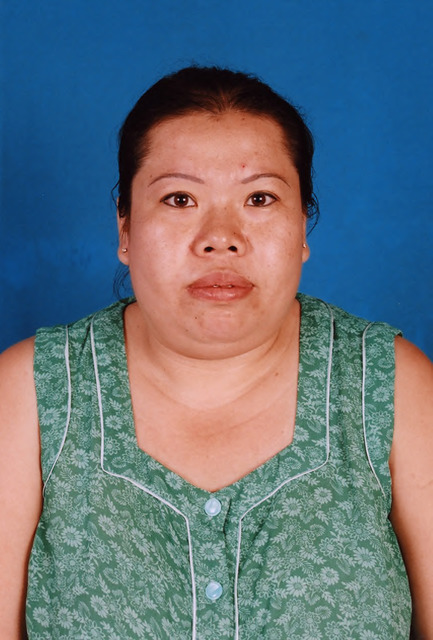 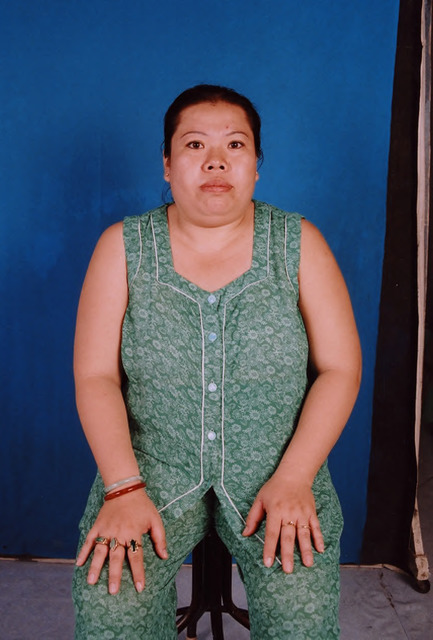 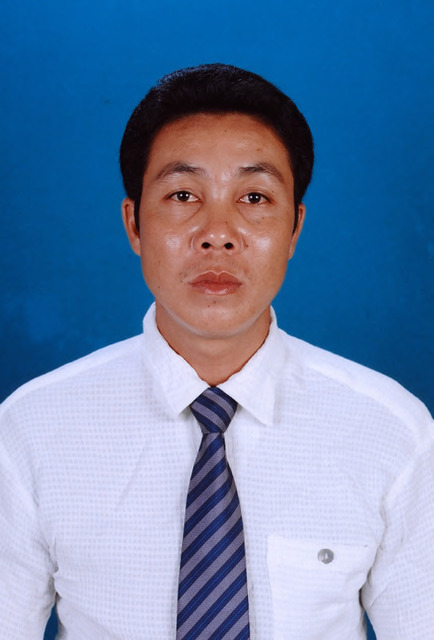 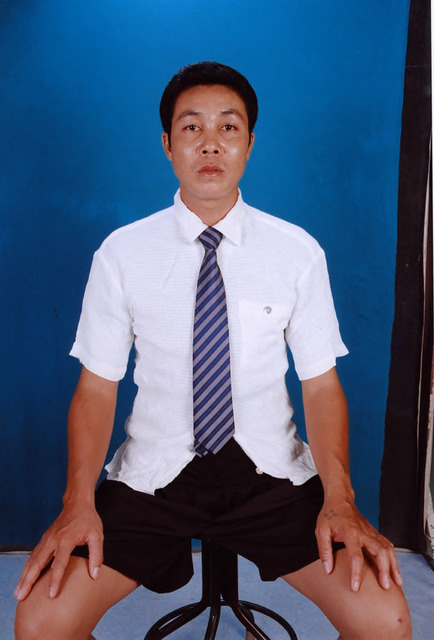 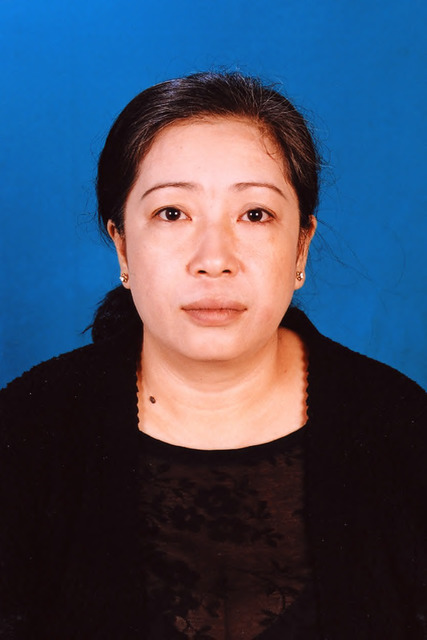 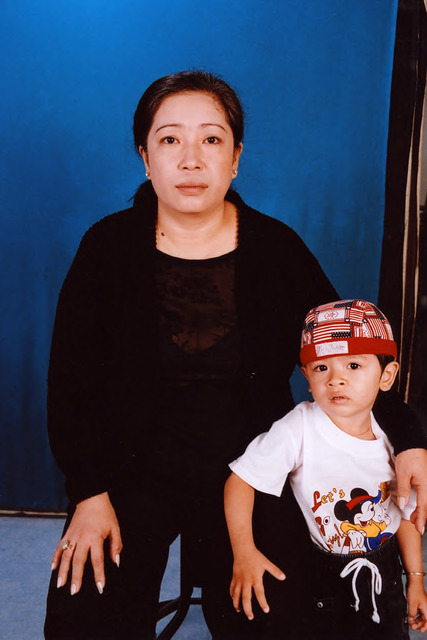 The Korean photographer Jeongmee Yoon tackles notions of role and its indoctrination at its roots by photographing girl children with all their pink possessions and boys with their blue ones. When her daughter would wear only pink clothes and play with pink toys, Yoon had her “aha” moment. Realizing this gender color-coding existed both in the United States (where she got her MFA) and in Korea, she cataloged the extraordinary—and unanticipated—extent of girls’ pink and boys’ blue possessions.

In “The Pink and Blue Project,” exaggeration leads to humor. Yoon sets the scene and arranges the props. Each shot takes five to six hours of preparation plus two or three to tear down and clean up. Every room is awash with color and objects and sometimes locating the child takes time. The vast number of toys and clothes highlights the extent of marketing and preconceived notions of femininity and masculinity. Although each individual shot is droll and a bit horrifying, when viewed as a series, this overabundance becomes outrageous and ludicrous. 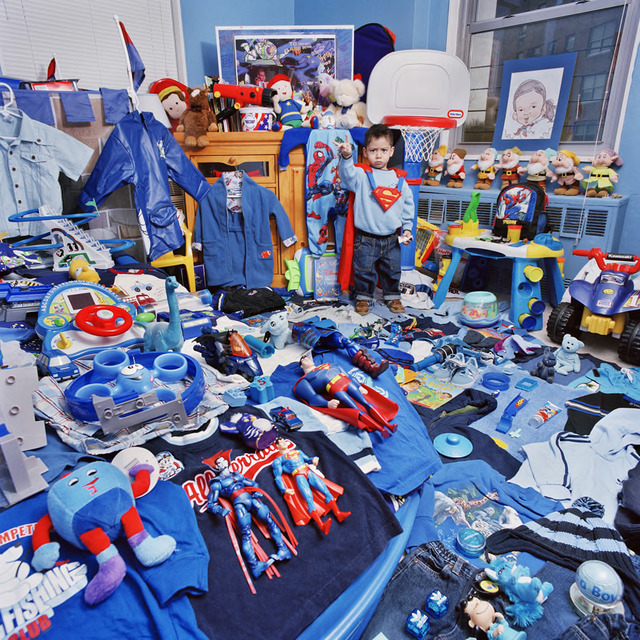 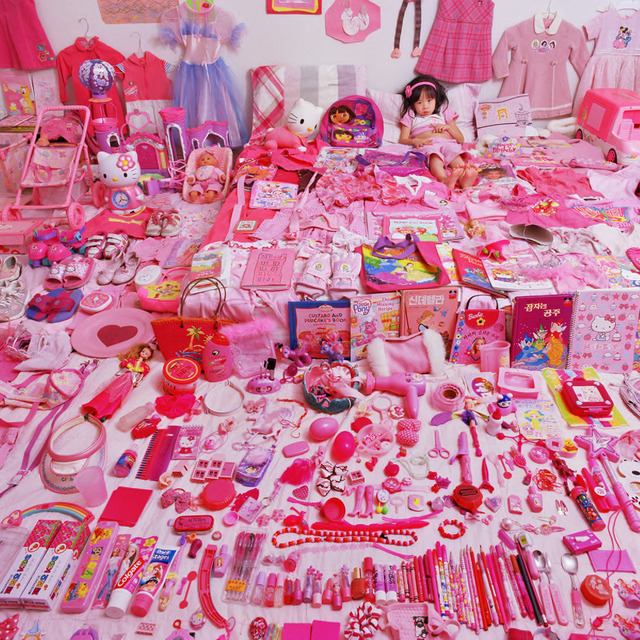 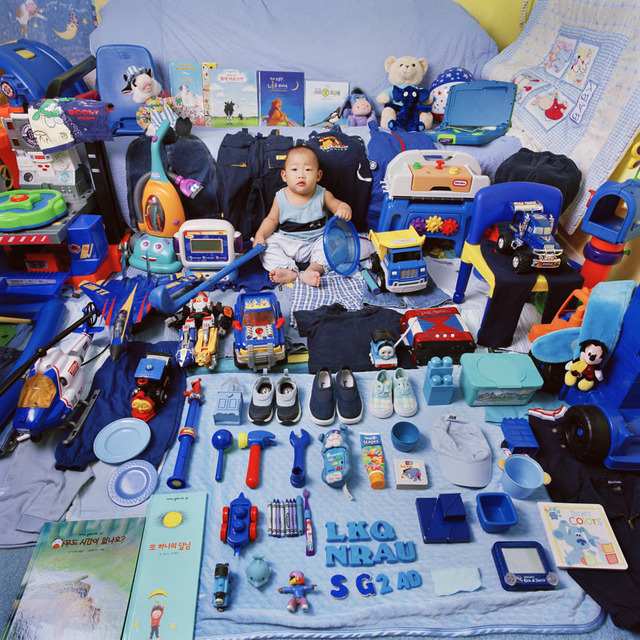 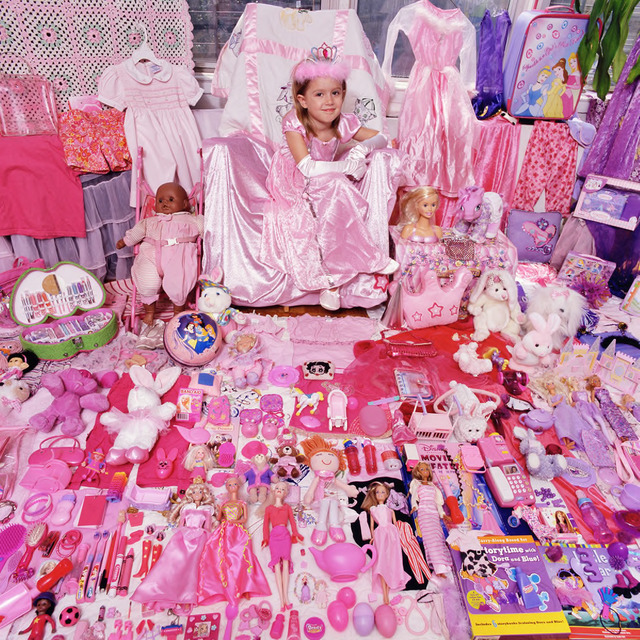 Benz Thanachart is the most anarchic of the group. He too deals in enclosed spaces, but he has no personal connection to the people who inhabit them.

Less the director than an impish provocateur, Thanachart would board a subway car in Bangkok and just before getting off yell some absurd word (for example, broccoli or “Kafka”) that would startle the car’s commuters out of their reveries. Using a cell phone, Thanachart would snap a picture of the reactions, then quickly exit. Thanachart, who received his MFA from the School of Visual Arts in Manhattan, noted that this kind of photograph could not be taken on a New York City train, on which people avoided eye contact and often had on earphones. Subway riders in his home country were less guarded and consequently more reactive. No matter what subway system with which a viewer is familiar, he or she promptly responds to the nonsensical nature of the word choice and the absurdity of the situation. The photographer’s interjection in the scene reads as a delight in the playful and an embrace of the comical. 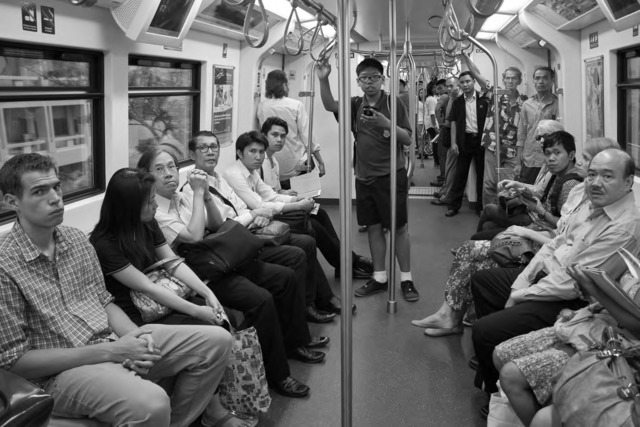 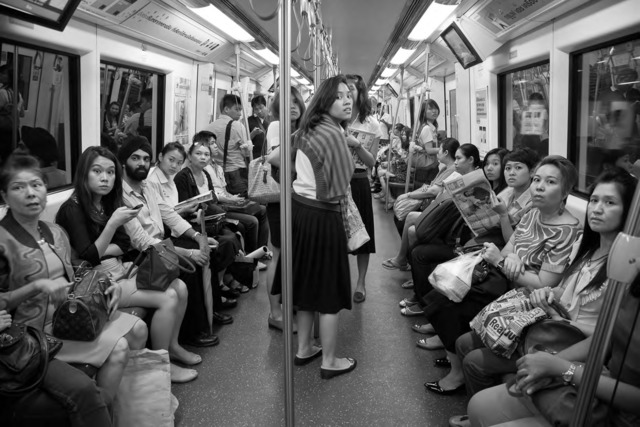 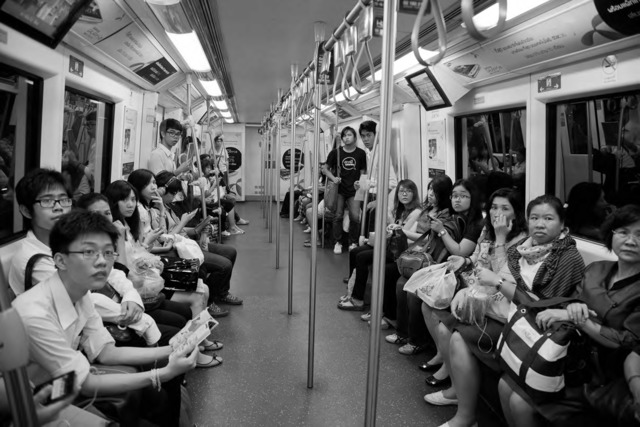 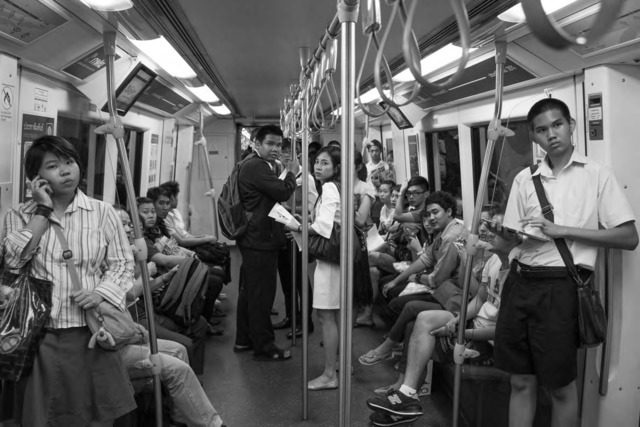 Judging from the work of these four diverse photographers, it does seem possible to be tickled by their varied approaches to the funny and amusing. While there are definitely cultural cues and references unique to their individual situations, cross-cultural humorous stimuli are made manifest. In the realm of wit, all borders are porous.

Abby Robinson photographic work has been published in The New Yorker, The New York Times, and numerous other publications and is in the collections of the Whitney Museum of American Art and the Museum of Fine Arts, Houston, among other museums. Her articles have been appeared in the New York Times, Newsday and Asian Art News. She teaches photography at the School of Visual Arts in New York and runs SVA’s summer Shanghai Photography Workshop.