Extreme isolation, economic devastation, political repression, and rugged terrain have prevented an accumulation of photographic records in Burma (Myanmar) throughout the last century. Photos that were taken were often limited to urban and foreign perspectives, and tended to focus on a few stereotypical images such as the pagodas at Bagan and monks receiving alms.

During the colonial era (1824-1948) the limited availability of cameras kept photography in the hands of a few elites.[1] In the second half of the century, at a time when cameras became widely available around the world, Burma suffered from decades of military rule, poverty, and civil war. The country was largely cut off from the outside world. During the long socialist period (1962-1988), few foreigners were allowed in and those who left the country rarely returned. Economic collapse prevented exposure to technological advances; the dictatorship stifled journalism, media, and the arts. Within this environment, photographs documenting the times were few and far between. 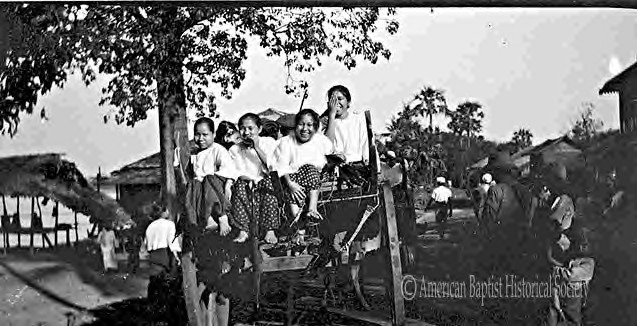 Amidst this scarcity of visual historical record, one of the largest collections of old photos from Burma resides with the American Baptist Historical Society (ABHS) in Atlanta, Georgia. The American Baptists’ very first overseas mission was to Burma, in 1813, and resulted in a significant presence long before British India colonized the entire country through a succession of wars. The missionaries travelled, with cameras, widely and to remote mountainous regions populated by ethnic minorities. They were also instrumental in introducing modern technology to the country, including printing presses. In Burma, the American Baptist mission made an exceptional mark on the course of history: today Burma has one of the largest Baptist populations per capita in the world.

It is due to this rich history that the ABHS is now home to a range of photo collections from American Baptists who lived in Burma, in addition to a wide array of correspondence, personal papers, and official publications printed in Burma. The Society is currently embarking on a project to digitize the materials in its archive. This is welcome news to those interested in archival photos from Asia and an exciting opportunity for people from Burma to explore historical documents from their country for the first time.[2]

An early feature of ABHS’s digitization project is the Hollingworth collection. Sidney Hollingworth was born and grew up in the Pittsburgh Pennsylvania, area, but later moved to Cuyahoga Falls, Ohio, where he worked for the Superior Printing Company in Akron, Ohio.  Just after he applied to become a printer at the Mission Press in Rangoon, Burma, he was offered a very substantial position at the Akron Advertising Agency, which he turned down in order to take the foreign mission job.

Hollingworth was sent to Burma, accompanied by his wife and their three children, by the American Baptist Foreign Mission Society in 1921. He worked at the Mission Press in Rangoon (Yangon) and lived in the country until 1936. While on furlough in 1925 his wife died. He re-married and he and his second wife had one daughter (Florence Wright) who was born in Moulmein in 1931.

During his years in Burma, Hollingworth took thousands of photographs with his Kodak Brownie camera as a personal hobby. Finding the work of local shops unacceptable for his standards, he developed many of the negatives himself. While he lamented the loss of photos to poor lighting, shoddy film developing, and mildew, he painstakingly preserved and organized those that survived. He numbered each image, pairing it to a descriptive caption that marked the date, place, and other details of the photo, making the collection exceptionally valuable. The result of his labor is a rare compilation of over seven hundred images that reflect the curious eyes of a foreigner living and traveling in Burma during the 1920s and 30s. 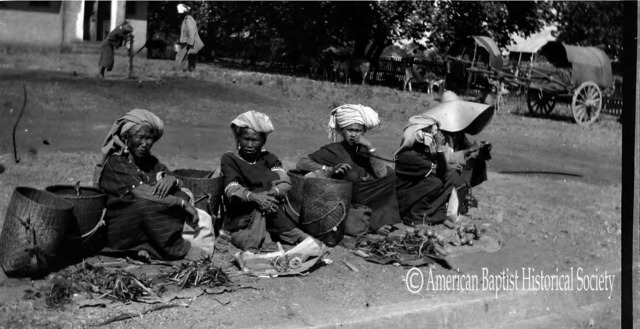 Four Pa-Oh women and one man (under the hat) in the 5-day bazaar at Taunggyi, Southern Shan State. Note the vegetables for sale, on dirty mats on the ground. See, also, the bracelets and heavy earrings, for these people carry all of their wealth with them. March 11, 1922.

After coming back to the U.S. in 1936, he did a lot of deputation work—-traveling around the country under Mission Board auspices and speaking about his mission work to churches and Sunday School groups. Hollingworth’s daughter, Florence Wright, notes:

There was talk of returning to Burma, but that never happened. The impending war, my father's poor health, and his age (he was 54 years old) did not permit further travel abroad. Plus, the mission funds were in jeopardy from the Great Depression. Sid began work at the Denison University library in 1937, as their Stack Man. He kept books shelved, and in order, while he arranged for future shelving, etc. He continued, however, to write to foreign missionaries, and was pleased to entertain college students and others from Burma and other countries in his home. He was a missionary in that sense as long as he was able.

Recently digitized by Florence Wright, and donated to the ABHS, the collection will now be made accessible to larger audiences.[3]

Although Hollingworth was methodic in organizing the photos once they were developed, he clearly did not systematically study the culture as an anthropologist may have done. Rather, curiosity and chance guided his camera, leaving us with a patchwork of images that range from appreciations of nature to snaps of local festivals and market scenes.

In addition to documenting important events of the Baptist community, the collection spans urban streets and rural villages: children play and adults conduct business; women prepare rice cakes, men thresh grains. Portraits of traders, farmers and fishers intermingle with those of giggling schoolgirls and newlywed couples. Photos of particular landmarks and places are also of interest for historical comparison. It is possible to conduct a “then and now” study of the Shan capital of Taunggyi in northeast Burma, for example, with Hollingworth’s panoramic shots of the city from the top of “the crag” at the edge of town. 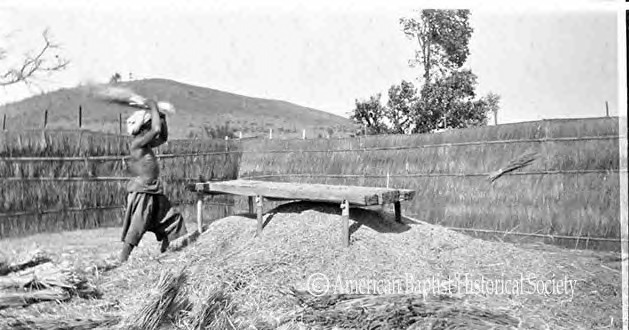 A Pa-Oh man threshing wheat by hand, at a threshing floor near Loikong, Federated Shan States [today’s Shan State]. Note the pile of wheat and chaff under the threshing table, and the unthreshed bundles. March 4, 1927.

A Reflection of People and Events

Beyond a diversity of scenes, the photos also reveal the diversity of Burma's people (linguists estimate that 100 languages are spoken within the boundaries of Burma). Through the reach of the Baptist network, Hollingworth traveled to far corners of the country, meeting and photographing many different ethnic peoples, from the Shan, Pa-Oh and Karen of the east to the Arakanese and Chin of the west, to the Mon in the south.

In Rangoon, he captures roadside tea stalls patronized by Muslim traders, and Hindi men thrashing clothes on the river banks. On the famous Inle Lake, he documents the unique fishing style of the Intha people, a favorite subject for photographers to this day. In the northern region, he stages and shoots portraits of the Shan royal family of Mongpawn and Chinese mothers playing with their plump babies. 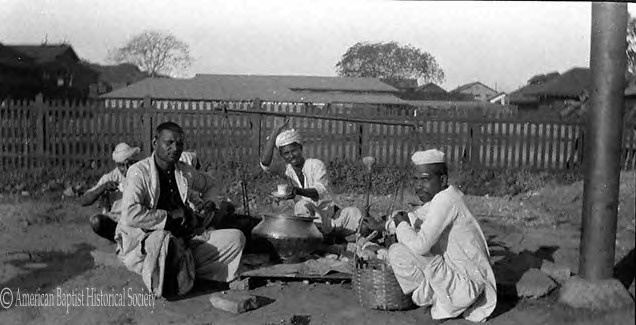 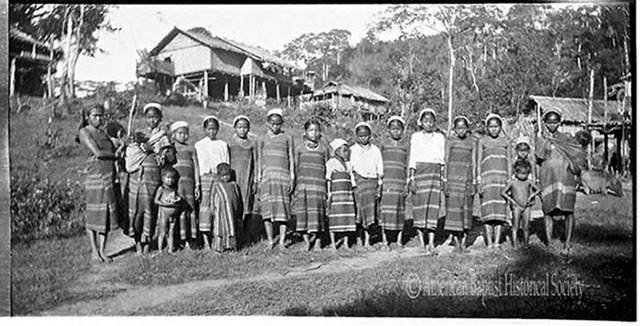 The collection also encompasses some of the historical moments of the time, including ceremonies for the appointment of Burma’s first British governor in 1923, an encampment of Punjabi troops sent to quell the rebellion of 1930, and the funeral procession of the Shan chief of Yaunghwe in 1927. 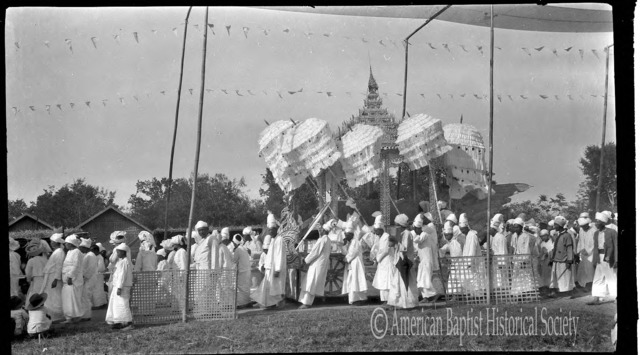 Hollingworth was clearly an amateur photographer, yet even when his composition, lighting, or focus is not perfect, the images still open a window into the daily lives of people at the time. Many of the rituals and festivals captured on film, such as the multi-day temple festival and collective rice planting in the village, are still carried out in the same fashion today. As time passes and life in Burma rapidly changes, these glimpses into the past are becoming ever more important to preserve. 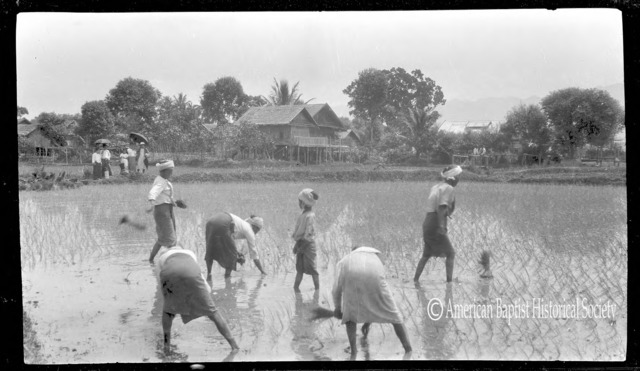 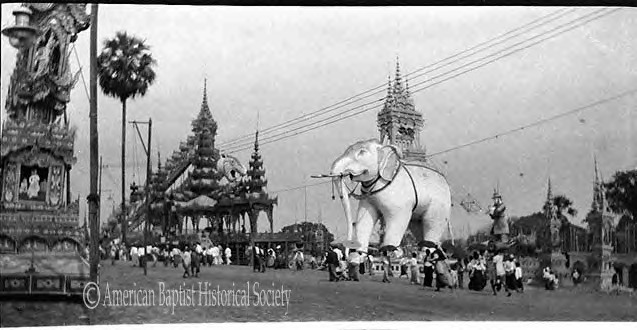 Scene within the Shwe Dagon pagoda grounds, Rangoon, during celebration of the Buddhist Feast of Thabaung. March 7, 1925.

Originally intended to document one man’s personal experiences and the American Baptist community in Burma, Sidney Hollingworth’s photos have survived nearly a century. Now, thanks to his daughter and the American Baptist Historical Society, they will be conserved for new generations. As the Hollingworth collection reaches more viewers, it may also inspire others to assemble and digitize additional historical photographs currently left in dusty corners.

Today, both the amount and quality of photos taken by people from Burma is dramatically increasing. When the massacre of students in 1988 led to an exodus of hundreds of thousands to border regions and gave rise to an exile movement, activists and journalists began taking and sharing documentary photos and videos in rural ethnic areas, moving across borders with cameras and images. The 2007 “Saffron Revolution” revealed networks of tech-savvy citizen journalists in the larger cities as well. These days, galleries, special exhibitions, publications, and websites display an abundance of native photographic talent.

As the process of digitization and distribution expands, today’s photos and those from the past together can expose people from various parts of Burma to the lives and peoples in other parts of the country. Ultimately they have the potential to open up new discussions about the country’s past and hopes for the future. 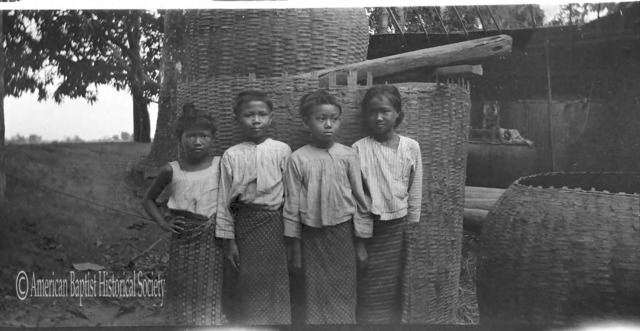 Jackie Imamura is an independent researcher based in Cambridge, Massachusetts, USA. She lived in Southeast Asia for ten years.