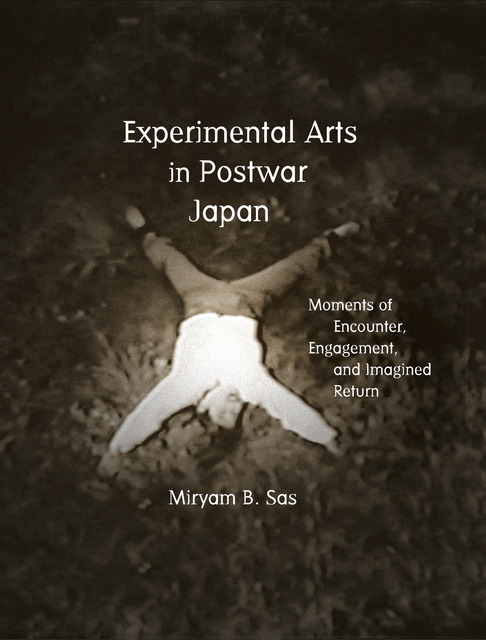 Miryam Sas’s Experimental Arts in Postwar Japan explores the critical issues of underground theater and various works in such related fields as butō (a contemporary dance–performance art that emerged in late-1950s Japan), film, video, and photography from the 1960s to the 1980s. Sas illustrates the ways in which cultural practitioners relentlessly grappled with the issues of authenticity, subjectivity, and the essentialist discourse of Japaneseness. In the book’s “Preface,” Sas states her aim of this publication: “My argument is that the issues raised here outline a revised and interdisciplinary genealogy of contemporary Japanese culture” (xv). Although the book’s emphasis is on the underground theater, the publication is also useful for historians of photography, because it increases attention to the exploration of scholars’ interdisciplinary interest in the works of postwar Japanese photographers.

Sas divides the book into three sections: “Modes of Engagement: Post-Shingeki’s Edge;” “Theories of Encounter;” and “Imaginations of Return: Film, Butō, Photography.” These section titles epitomize Sas’s argument in this book. In the first section, Sas states that the underground theater was critical of the Japanese government’s war politics and of shingeki, the Japanese staging of Western theatrical works. Through these engagements, post-shingeki theater such as Terayama Shūji’s Tenjō sajiki theater and Betsuyaku Minoru’s plays challenged conventional player–audience relations, in which Japanese audiences would only receive fixed messages from plays; the challenges to these conventions disrupted audiences’ interpretations of plays. In the second section, Sas delves into the idea of “encounter” by employing philosopher Watsuji Tetsurō’s theoretical take on subjectivity. Drawing on Watsuji’s ideas about the reciprocal relationship between subject and object, Sas explains Tenjō sajiki’s leader Terayama’s eschewal of distinguishing between subject and object and the attempt by Lee Ufan, the central figure of the prominent 1970s art movement Mono-ha, to do away with the relationship per se.

The last section comprises three chapters, examining works in the fields of film, butō, and photography respectively. In these three chapters, Sas argues that Japanese practitioners in these three fields would explore various points of origin: cinematic practitioners explored the topic of the atomic bomb, a butō dancer explored his relationship with Surrealism, and photographic practitioners explored the established concept of photography, in which photographs should symbolically express their subject. However, according to Sas, the practitioners’ respective efforts to return to a point of origin were only dreams. With threads of the key concepts of engagement, encounter, and imagined return, Sas brilliantly analyzes works from various cultural fields.

Sas devotes the eighth chapter to the photography in the journal Provoke and to Moriyama Daidō’s photographic production for his project entitled Tōno Monogatari (Tales of Tōno). Sas argues that Provoke and Moriyama’s photographs tackle the issues of reality and of imagined returns. For example, Provoke members ideologically and philosophically questioned the reality in photography through its relation to language. Regarding Moriyama, Sas argues that he failed to cooperate with the mythic image of Tōno, a primal landscape of Japan; as a result, Moriyama’s photographs juxtapose objects in his actual life (e.g., a porn poster, a beauty-salon signpost) with well-known Tōno images (e.g., a traditional farmhouse).

Sas’s thematic approach to understanding the art and the artists in these fields helps to undermine established views that not only Japanese postwar culture but also Japanese postwar photography were by-products of Western culture. Indeed, as an associate professor of comparative literature and film studies, Sas rightfully analyzes the photographers’ writings rather than visually compare the works with their Western predecessors. Sas quotes Nakahira Takuma, a Provoke photographer, regarding his thoughts on Japan National Railway’s advertisements, noting his advocacy for revolution that emerges from one’s frustration over the impossibility of returning to one’s symbolic and actual homeland (kokyō) (129). Sas observes that Nakahira’s assertion is apparent in Japanese films and in butō works dating from that general period. By locating Nakahira’s writing in the opening of the last section of the book, Sas acknowledges the conceptual importance of Japanese postwar photography.

However, Sas’s approach could be a double-edge sword that risks dissociating prewar Japanese photography from postwar photography. The rupture between prewar and postwar seems to be natural after the scholars’ accumulative discussions about the impact of war on Japanese society. Although Sas examines the relationship between Surrealism and a butō dancer in one of the chapters, the starting point of her argument in this book is precisely the war’s end, a moment that—she argues—Japanese theater practitioners and filmmakers have contemplated ever since. Nevertheless, the prewar/postwar division is never quite so clean in Japanese photography. For example, Provoke photographers’ works are inseparable from the photographs of prewar photographers. Consider Provoke member Taki Kōji, who had worked for Natori Yōnosuke, a critical importer of reportage photography from Germany to Japan during the 1930s; and the tradition of hōdō shashin (generally translated as ‘photojournalism’) also drew on Natori’s reportage photography and was a major impetus for Provoke photographers’ passionate inquiries into the nature of photography. The Provoke photographers denounced the illustrative role of photography as seen in hōdō shashin, and strived to lay bare the deeper mechanisms of photography. Although the link between Taki and Natori is still tenuous, a dominant view of Provoke as a game-changer in the history of postwar Japanese photography would require thorough research revealing complexities in the publication.

Sas’s argument that Moriyama valorized the values arising from his own reality and from Tono’s mythic placement relies largely on her formal analysis of Moriyama’s photographs. In 1976, after Moriyama’s 1974 solo exhibition featuring photographs on the theme of Tōno Monogatari, they appeared in a compilation book of the same title, which was reprinted in 2007 in Japan. An English version of this book, coinciding with Moriyama’s exhibition at the Tate Modern, will become available in the fall of 2012, quite soon after the publication of Sas’s book. These transformations and recontextualizations of Moriyama’s photography were also critical to Moriyama’s proclaimed views on photography, in which the photograph of an object is no less real as a perceptual entity than the object photographed. Sas does not specify whether two photographs she analyzes in this book are from exhibitions or publications, so the reader cannot consider whether the physicality of the photographs (e.g., media, size, order of placement) would contribute to Moriyama’s valorization of values. Although Sas acknowledges that Moriyama’s desire for a solo exhibition was the engine for his disruption of the established image of Tōno, a close examination of the context of Moriyama’s photographs would have enhanced her argument.

Sas’s nuanced readings of theater, butō, video, film, and photography simultaneously illuminate the similarities and differences in the conceptual underpinnings of the works. Rather than recount a story chronologically, Sas’s tour de force theorization ambitiously demonstrates Japanese cultural practitioners’ conceptual, physical, and temporal exploration of their relationship with the self, others, and the environment. Sas’s treatment of Japanese photography provides an inadequate account of the field’s continuing inheritance and physicality, but her contextualization opens up a new vista of Japanese photography for scholars in various disciplines.

Yuko Fujii is an independent scholar based in Tokyo. She completed her dissertation, “Photography as Process: A Study of the Japanese Photography Journal Provoke” at the Graduate Center, City University of New York, in February 2012. Her article “Authorship in Negotiation: Carina Hesper’s 50 Faces” will be published in Dutch photographer Hesper’s forthcoming photobook 50 Faces, which will be comprised of Hesper’s photographs taken in Beijing.