This online exhibition examines how three Cambodian photographers document and open up discussion about war and violence. Tactical, creative, and brave, the photographers apply different approaches in capturing three important chronicles of Cambodia. They look at historical conflicts as well as violence in the current day.

Vandy Rattana employs a mode somewhat between documentary and art photography to record evidence of American bombing over Cambodia from 1965-73. Khvay Samnang uses high school student portraiture to delve into the memory and trauma of the Khmer Rouge regime from 1975-79. Sovan Philong, meanwhile, adopts a photojournalistic mode to document ongoing land conflicts between the Cambodian government and its people. Documentary is most often associated with photojournalistic practice, yet these artists’ work blurs the distinction between documentary and art.

All born after the 1975-79 regime, the three photographers find innovative ways to communicate ideas about history and events that occurred before they were born and in the present day. They succeed in impelling the viewer to study about war and violence through a new and different lens.

It is estimated that between 1965-73 the U.S. military dropped more than 2.7 million tons of bombs over more than 113,000 sites in Cambodia[1]. Troubled by the lack of documentation on the topic, Vandy Rattana traveled through 10 heavily affected eastern and southern provinces and took photographs of craters created by dropped bombs.

“You can hear something a thousand times and not know it, yet if you see it with your eyes just once, you know,” Vandy says in his 2011 The Bomb Ponds exhibition catalogue, referring to a Khmer proverb.

At first glance, Vandy’s The Bomb Ponds photographic series reveals serene landscapes of Cambodian countryside and forest. Yet, upon closer observation, the seemingly mysterious and untouched ponds central to the images confront the viewer with their grim historical significance, and their relationship to people.

Straddling documentary and artistic photography, The Bomb Ponds recounts an important yet dreadful history through (a visual language of natural) beauty. Unlike provocative images of war that show acts of ferocity, The Bomb Ponds presents calm, almost mesmerizing scenes, allowing viewers to be caught in a quiet space, yet also to connect with the fragility and persistence of the land and the people.

Vandy witnessed and documented the scars of an as-yet-unresolved violent history. Ironically, the ponds are also a source of life. Whether in the middle of rice paddies or in the forest, they supply water for rice farming and animals, and support the livelihoods of villagers. The potential ill effects of the water, however, are yet to be studied.

A self-trained photographer, Vandy Rattana (b. 1980, Phnom Penh) works mainly with film. His passion is to document endangered realities in a rapidly changing Cambodia in order to create an archive for the present and the future of his country. His work has been exhibited in 18 countries, including at the 2012 dOCUMENTA(13), the 1st Kyiv Biennale, and the 2009 Asia Pacific Triennial. 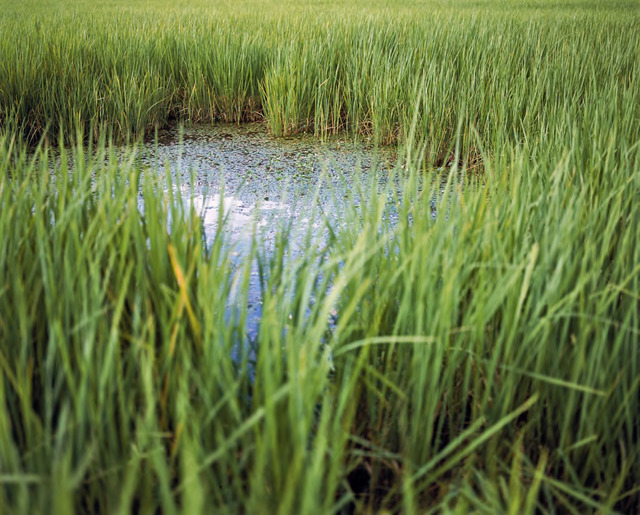 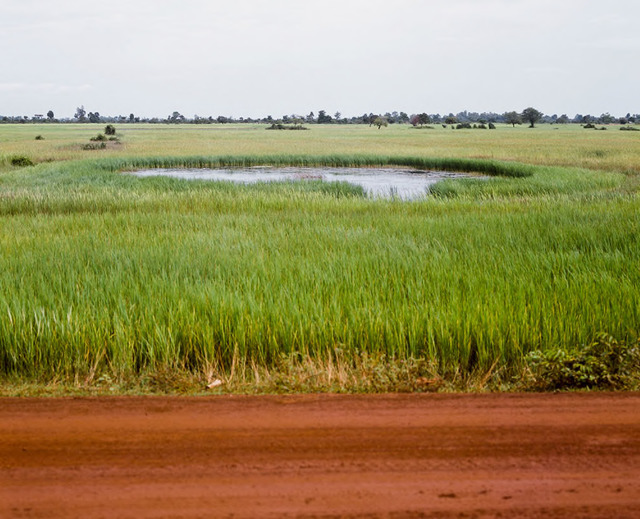 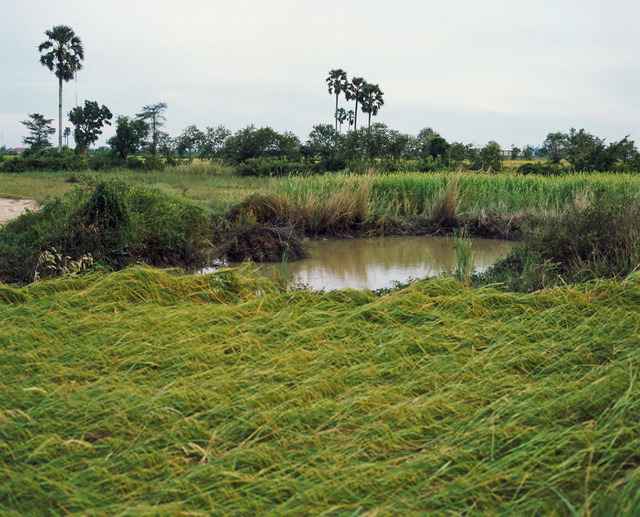 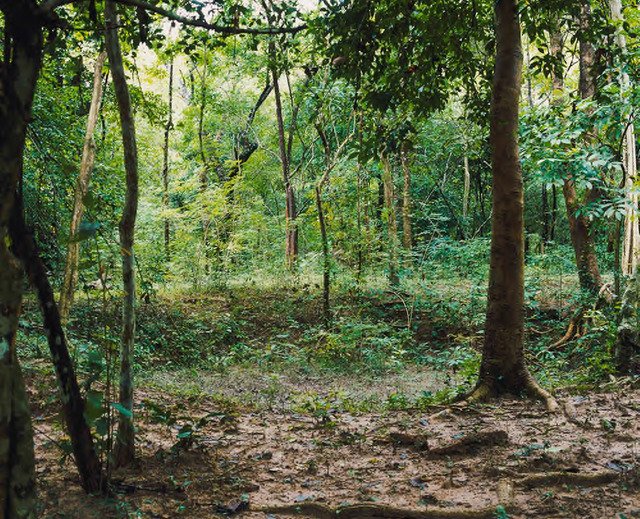 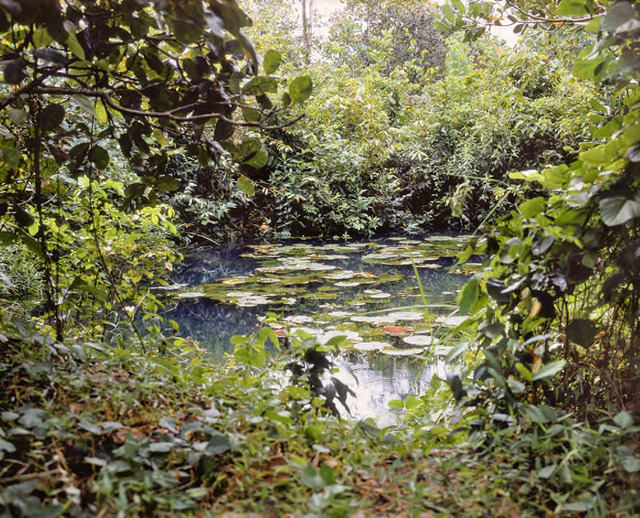 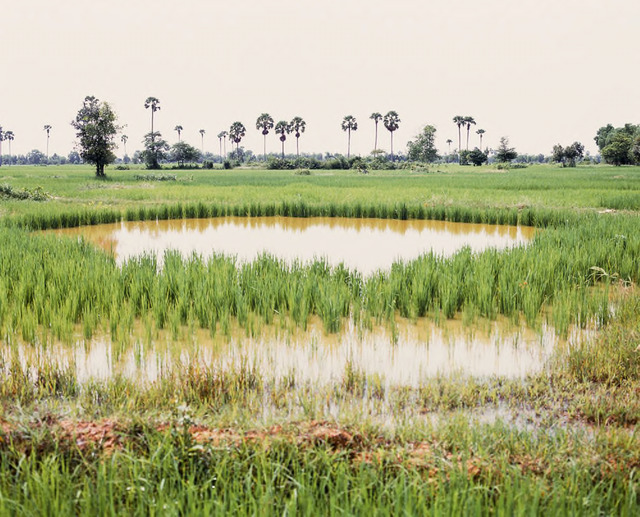 In 2008, cross-media artist Khvay Samnang was asked to take portraits of 800 high school students for their graduation. Through the process of repeating so many individual shots, Khvay unwittingly recreated the vision of mug shots of S-21, or Tuol Sleng, a Phnom Penh high school converted into a prison and interrogation center during the Khmer Rouge regime from 1975-79.

An estimated 17,000 people were imprisoned and tortured in Tuol Sleng before they were sent off and killed. Until recently, only about 5,000 photographs of victims were found, with a large collection displayed at what is now the Tuol Sleng Genocide Museum. In August 2012, an additional collection of over 1,200 photographs was discovered.

Khvay’s Reminder testifies to the way deeply ingrained trauma and memory can resurface through iconic visual references. Each student in Khvay’s photographs, originally exhibited as a single-channel video, wears a nametag, as in the photos of Tuol Sleng prisoners. Because of the kind of lens he uses, the subjects look strange with somehow exaggerated heads when close to the camera. Without the artist suggesting the topic, the students are reminded about the prison photos through this process. The students articulated this to Khvay as they posed for his camera, complaining that his composition had disturbing connotations, which he had not previously considered. With this in mind, we might imagine that Khvay’s images document the precise instant of the students’ remembering. In each shot, it seems that their expression captures the moment when they are thinking about the Tuol Sleng portraits.

Though in color format, the simple, repeating grid composition of the photographs closely resembles the photo panels displayed in Tuol Sleng, reconnecting viewers to the notorious regime, which killed approximately 2.2 million Cambodians. 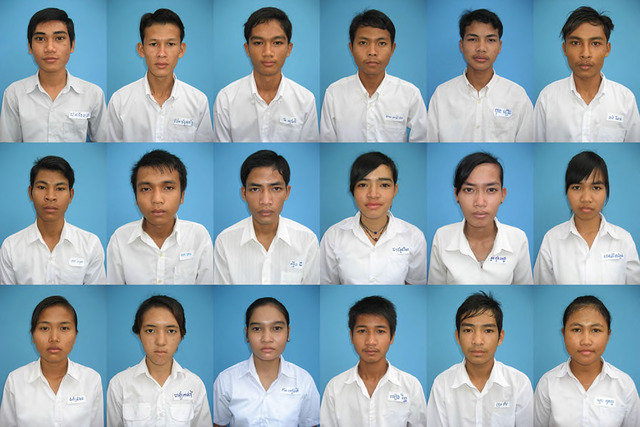 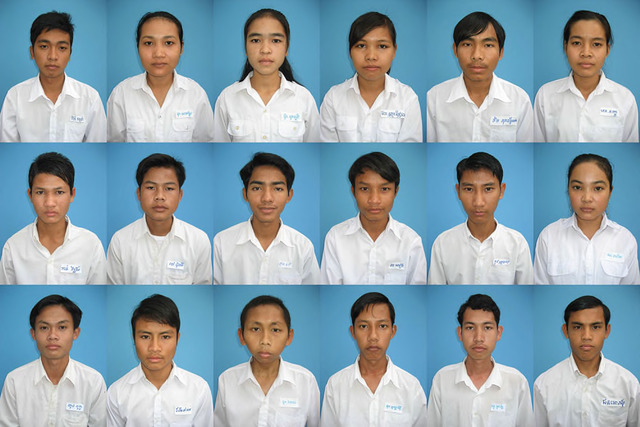 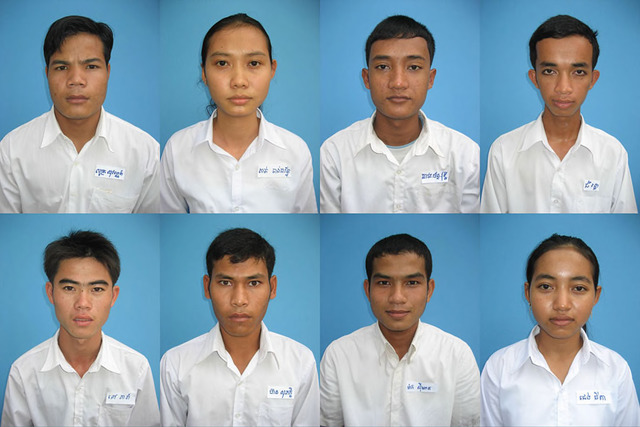 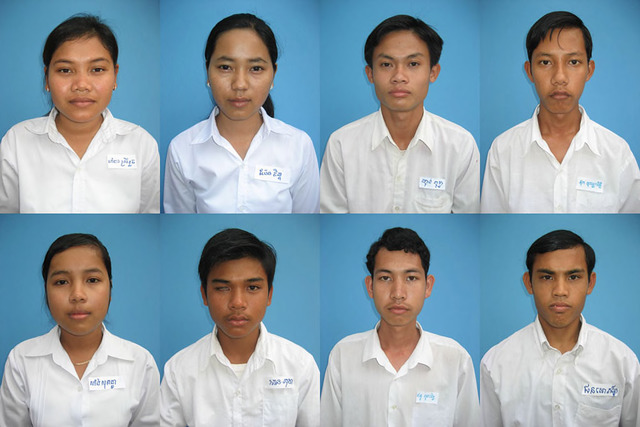 One early morning in June 2011, 250 villagers of Stock Slat village in Kampong Speu Province were armed and blocking the path of 300 police officers who had arrived to evict them from their land. This 65-hectare plot of mostly rice paddies had been awarded by the Supreme Court to a private company.

The police forced their way through. The villagers fought back with whatever tools they could grab, including sticks and farming implements. There were smacking sounds and gunfire, and the blood of both villagers and police was shed. Sovan Philong was present at the conflict and took photographs of the day’s events.

This eviction is one of many amid an ongoing crisis over land use in Cambodia in the wake of privatization and urban development, which has swept through the country in the past decade. Notably, villagers and farmers in the provinces have lost farmland, while low-income urban communities have been steadily removed from the city center to make way for high-rise apartments and commercial centers. Residents are either forcibly removed, or they are excluded from the new housing and developments.

Using his photojournalist credentials, Sovan was able to record events from close up. His approach bears similarities with reportage photography on war and violence. Sovan risks his personal safety to access sites in order to capture and share photographic evidence of conflict.

National media are often cautious about reporting on land evictions. In this context, images such as Sovan’s are particularly important. Often circulated internationally and spread through social media networks, they help to foster continued discussion of these issues.

Violent Scenes in a Rice Paddy also captures a vulnerable moment of human despair and helplessness. Showing the mistrust many people feel toward the Cambodian legal system, one image shows villagers calling out to a “higher power.” Making supplications to the prime minister and the government who ordered the police raid is likely to be of little help to these villagers. So they rely on traditional beliefs in the spirits.

After decades of war and civil conflict, Cambodia’s current government presents itself as the savior of the Cambodian people. The government, which claims to be democratically elected, seeks its legitimacy in this role of peacekeeper. Nevertheless, when viewing Sovan’s images of violent conflict in the present day, perhaps many Cambodians cannot help but wonder about the veracity of the government’s claim. The echo between recent violence and historical conflict is, to many audiences, self-evident in Sovan’s images.

Sovan Philong (b. 1985, Phnom Penh) studied photography with well-known photographer, Mak Remissa. He is a photographer for Asia Motion photography agency. Besides covering the news, Sovan also develops personal photographic projects, mostly about vulnerable urban communities and cultures that are unique to Cambodia. His latest exhibitions include Rupture and Revival: Cambodian Photography in the Last Decade at the Institute of Contemporary Arts Singapore (2012), Photoquai Biennial 2011, and the 2011 Angkor Photo Festival. 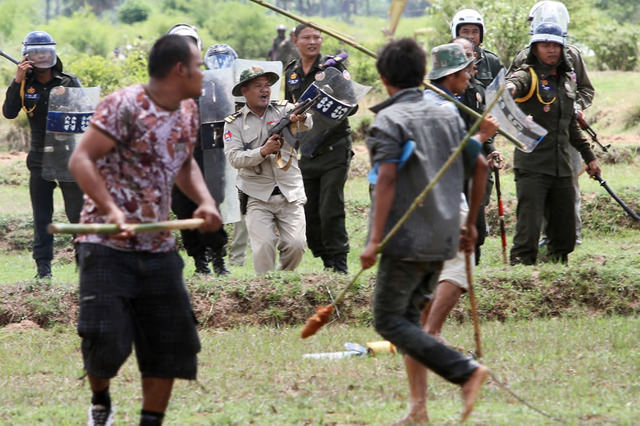 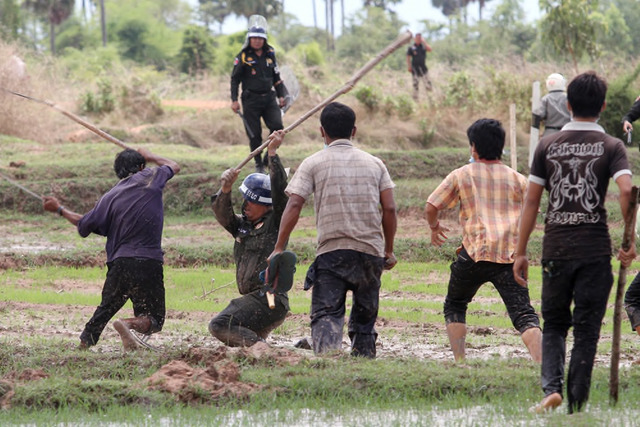 Sovan Philong, ‘Violent Scenes in a Rice Paddy 08’, 2009. Digital C-Print. A villager and a police officer, both holding long sticks, ferociously smack each other while more villagers run in to give backup. Courtesy the artist and Asia Motion. 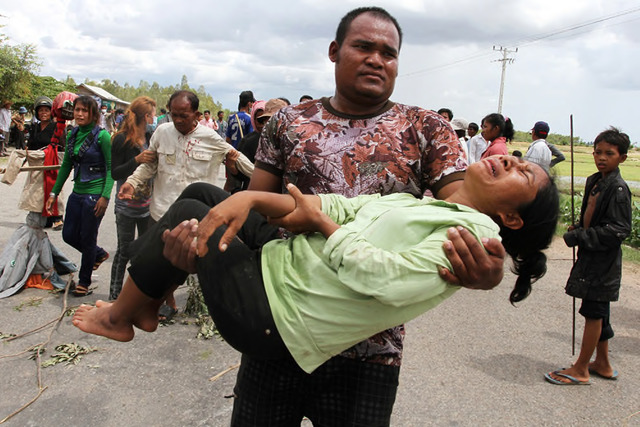 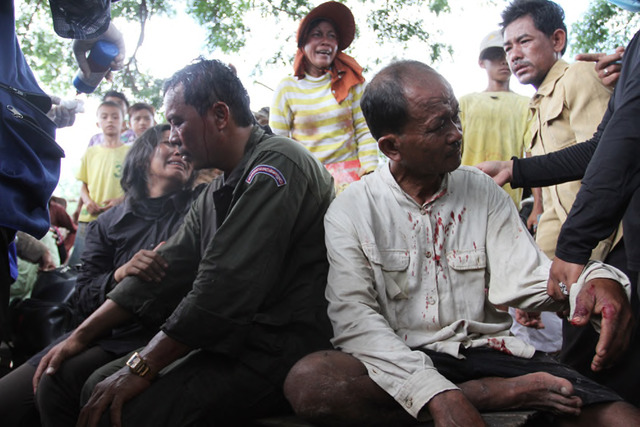 Sovan Philong, ‘Violent Scenes in a Rice Paddy 12’, 2009. Digital C-Print. A police officer and a villager ironically sit next to each other, receiving medical aid while blood drips from their heads. Courtesy the artist and Asia Motion. 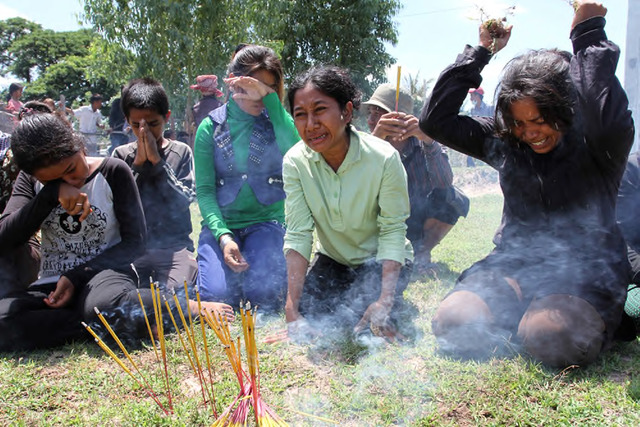 Sovan Philong, ‘Violent Scenes in a Rice Paddy 03’, 2009. Digital C-Print. A group of villagers cry and pray to the spirits of the land. One woman among them clutches pulled grass in her hands, filled with anger and grief. Courtesy the artist and Asia Motion. 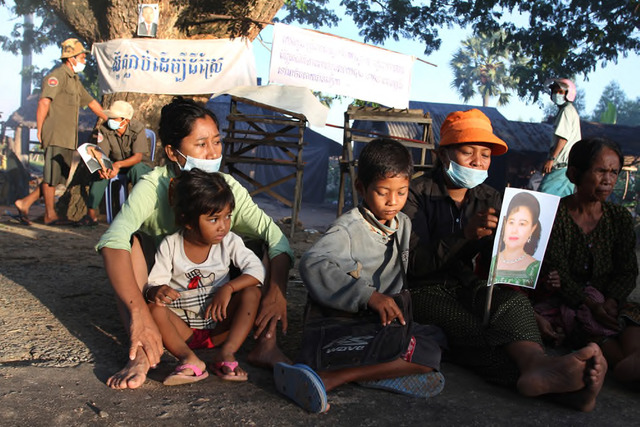 Sovan Philong, ‘Violent Scenes in a Rice Paddy 02’, 2009. Digital C-Print. Women and children holding a picture of the Cambodian Prime Minister’s wife, with a banner that reads ‘Die for farmland’ and a picture of the Prime Minister Hun Sen in the background. In desperation, the villagers appeal to the very government that ordered the police to raid them. Courtesy the artist and Asia Motion.

Vuth Lyno is Artistic Director of Sa Sa Art Projects, an experimental artist-run space founded by Cambodian art collective Stiev Selapak. His art practice encompasses photography and sound. Vuth’s works tend to be participatory in nature, and to engage specific Cambodian communities and the cultures unique to them. He also curates exhibitions and organizes related events in Phnom Penh. Vuth is Visual Art Curator for 2012’s Cambodian Youth Arts Festival, and in 2012 is exhibiting in the touring exhibition of Southeast Asian art, RiverScapes IN FLUX, and at ROUNDTABLE, Tobias Rehberger Pavilion, 'You Owe Me. I Don't Owe You Nothin.', Gwangju Biennale.