All photographs by Sheila Pinkel

In 1990, I visited Hmong and Cambodian refugee camps in Thailand to better understand the aftermath of the wars in Vietnam, Cambodia, and Laos that took place from 1962 - 1975 and to learn about the lasting effects of war on its survivors. In 2000, I went to Laos on a similar journey. It was then that I began to truly grasp the effects of the Vietnam War and the Second Laotian War, from 1964 – 1975, on Laos. The United States and Laos were never formally at war, and because the U.S. Congress was kept in the dark about the conflict, our conflict in Laos came to be known as the Secret War. The rationale for the American bombing of Laos was to destroy the Ho Chi Minh Trail and other supply routes connecting North and South Vietnam that passed through northeastern Laos and portions of Cambodia. Also, the United States supported the Royal Laotian Army to help the Royalist regime wage a civil war against the Pathet Lao, who were receiving assistance from the Viet Minh communists in Vietnam. The following is a brief slice of my research having to do with unexploded ordnance (UXO) in Laos.

1. History of unexploded ordnance in Laos

Laos has the distinction of being, per capita, the most heavily bombed nation in the world. More bombs were dropped on Laos than were dropped by all parties during the Second World War. From 1964 – 1975, 2.5 million tons of ordnance were dropped on Laos by the United States in an attempt to block the flow of North Vietnamese troops and arms through Laotian territory on their way to South Vietnam. Many of those bombs were dropped by planes returning from bombing missions over Vietnam. Canisters dropped from US B-52s could carry up to 600 cluster bomb units that scattered over a wide area on impact. The equivalent of a planeload of bombs was dropped every eight minutes for nine years. Roughly 30 percent of this ordnance failed to detonate. In many areas of Laos, people were forced to live in caves during the day and farm only at night.

In 1996, the Lao government established the Lao Unexploded Ordnance Programme (UXO Lao). In 1997, Mines Advisory Group (MAG) was invited by UXO Lao to work with GEBERA, a German UXO clearance organization, Handicap International, and Norwegian People’s Aid Cambodia to help with its effort to provide education and de-mine the most bombed areas in Laos. MAG is a British NGO dedicated to helping countries recover from war. MAG states that all 17 provinces in Laos have UXO contamination and estimates that since the end of the war in 1975, 20,000 people have been killed or maimed by leftover bombs in Laos. Today, casualties per year number approximately 300.

While in Laos in 2000, I saw many MAG posters warning that the land is still littered with unexploded ordnance. These posters were on the walls of public buildings, restaurants, and guesthouses frequented by foreign travelers.(Fig. 1.1-1.2) They were also in markets where Laotian people shop. The posters included here were on the wall of a guesthouse in Phonsavan. Some posters addressed the danger of adults opening bombs.(Fig.1.3) Some warned children not to pick up or touch them (Fig.1.4-6), and some showed the on-going danger for farmers when working their land.(Fig.1.7-1.8) These posters are done in a painting and drawing style reminiscent of the visual folk tradition of the region. Embroideries about the war done by Hmong in refugee camps, while not paintings or drawings, used a similar symbolic language.(Fig. 1.9) 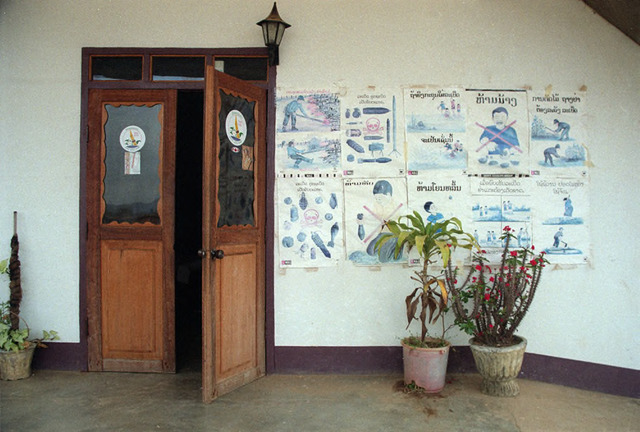 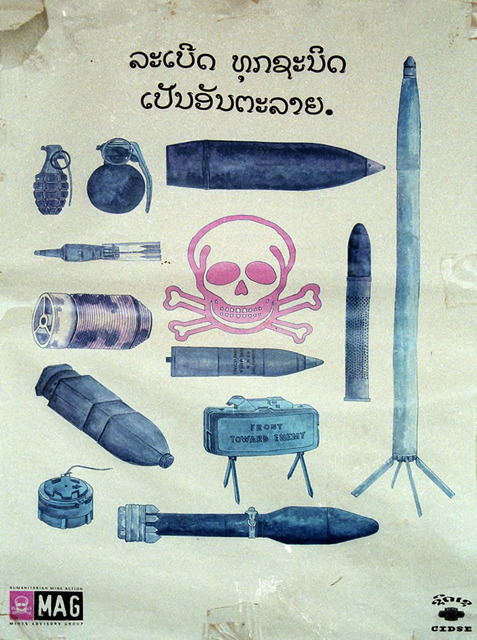 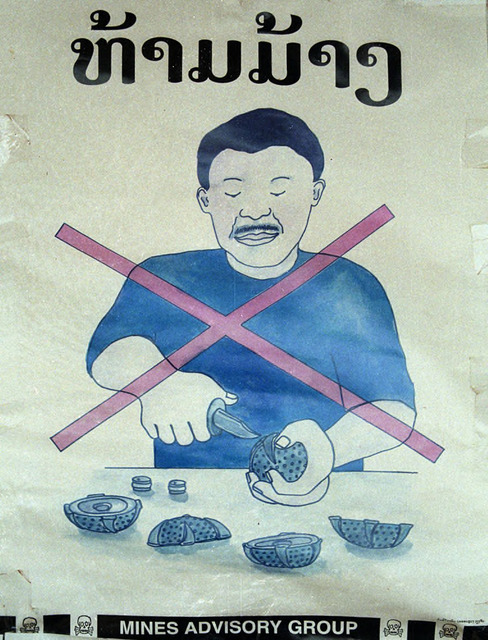 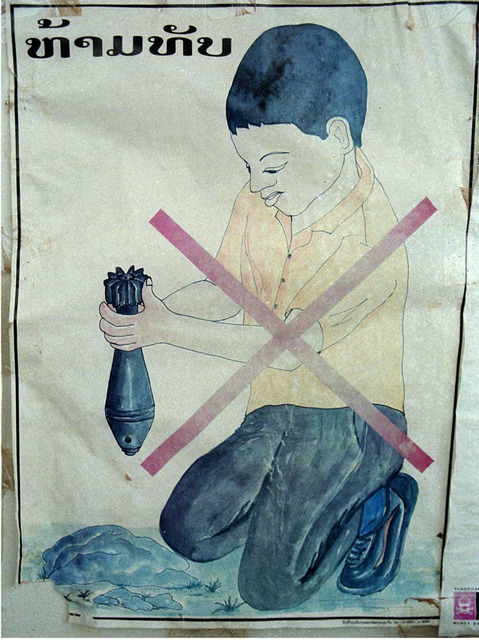 Fig. 1.4: Poster warning children and others not to pick up bombs. 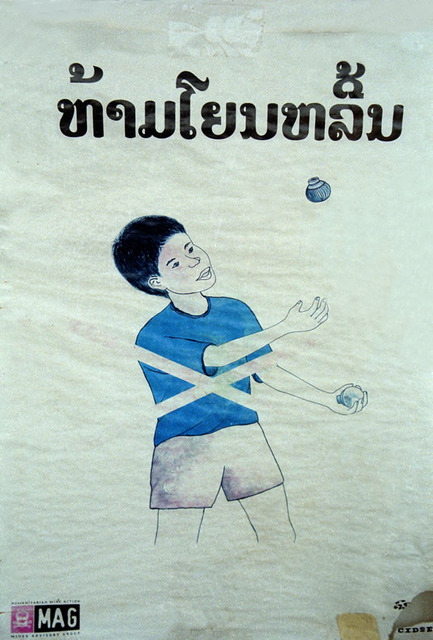 Fig. 1.5: Poster warning of the danger of children and others holding or throwing cluster bomb units. 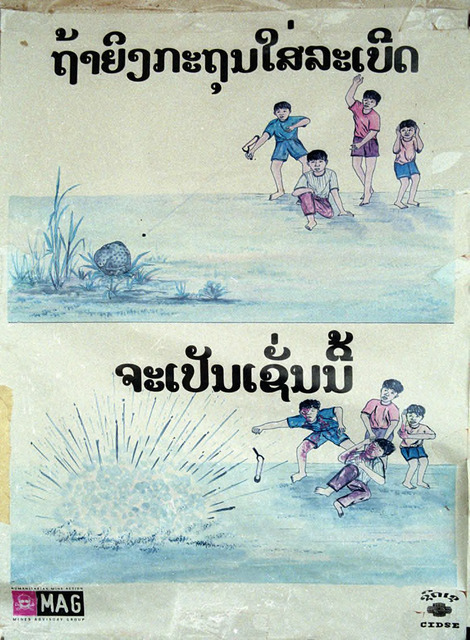 Fig: 1.6: Poster warning children not to disturb bombs when found. 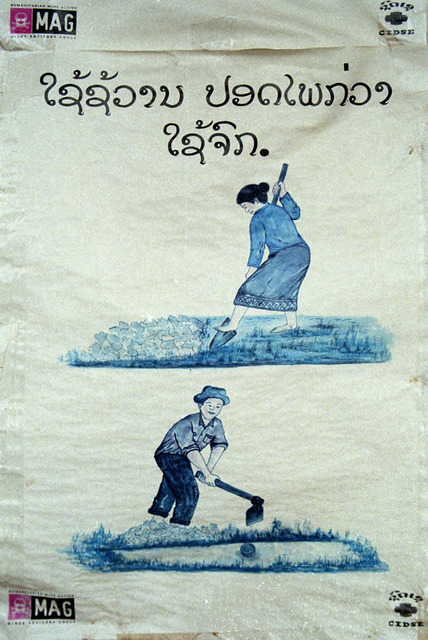 Fig. 1.7: Poster warning men and women of the dangers when farming. 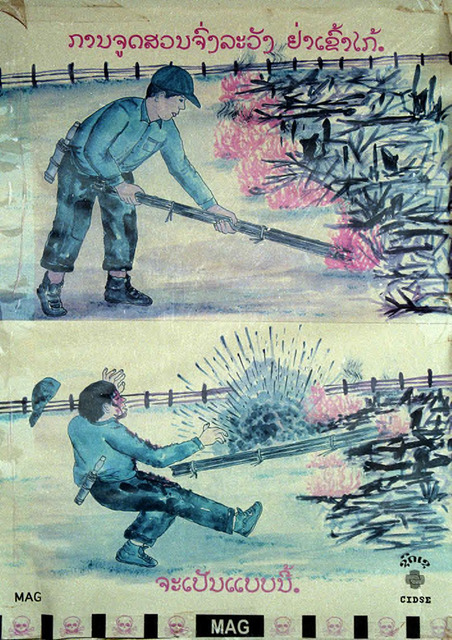 Fig. 1.8: Poster warning of the danger of explosives when burning fields. 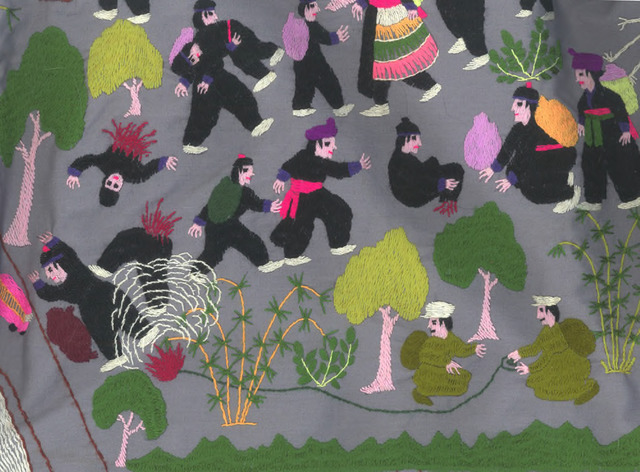 Fig. 1.9: Section of a Hmong embroidery showing dangers of explosions during the Laotian war.

According to MAG, UXO contamination remains a key cause of poverty and is one of the primary factors limiting the country's long-term development, as it prevents people from using land and denies them access to basic services. Twenty-five percent of the potentially farmable land is not usable due to potential bomb contamination. The toll is not just on the people who have been maimed or killed but also on their families who must struggle to survive and the children who cannot go to school because of poverty resulting from UXO-related injuries. The psychological toll on the people is extreme. Subsistence farmers live in daily fear that they or their children will be injured or killed.

2. The residue of UXO 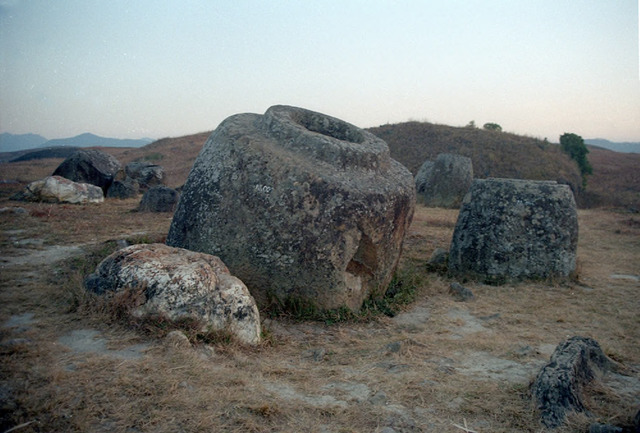 Fig. 2.1: Plain of Jars, Laos, where intense bombing destroyed many of the stone containers.

(Fig 2.1) When flying from Vientiane to Phonsavan, I saw the land below was pitted with bomb craters, many of which had become containers for rainwater. The Plain of Jars, a prehistoric burial site in the Xieng Khouang plateau adjacent to Phonsavan, was the location of much fighting during the war. Many of the artifact jars buried in the site were fractured or destroyed in the conflict.

Cluster munitions are the main cause of UXO casualties. According to MAG, 270 million sub-munitions, so-called bombies, were dropped on Laos, 80 million of which remained unexploded at the close of the war. The process of clearing the land of UXO is painfully slow. While in Vientiane, I interviewed Peter Gammon(Fig. 2.2), a demolition expert working for Norwegian Peoples Aid Cambodia. He estimated that a demolition team could clear 25 square meters of heavily contaminated land a day or 200 square meters of lightly contaminated land a day. The National Regulatory Authority for UXO/Mine Action estimates more than 200,000 hectares of prime agricultural land remain to be cleared. Even after the land is cleared of bombs, there is no guarantee that it will remain cleared due to the monsoon rains that wash over the land. The Lao government has prioritized 22,000 hectares to be cleared in the next 16 years. As Laos continues to industrialize and develop infrastructure, such as dams, poor farmers are being forced to work land that is high risk due to the presence of UXO. 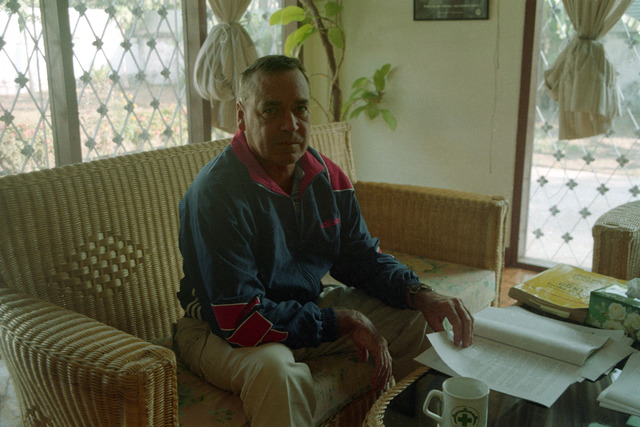 The heaviest bombing in Laos took place in the north and northeast provinces. I was able to photograph displays of bombs in front of the guesthouse where I stayed in Phonsavan (Fig. 2.3). The UXO Lao office in Vientiane had an extensive series of displays as well as a library of photographs taken during the Second Laotian War. (Fig. 2.4-2.5) 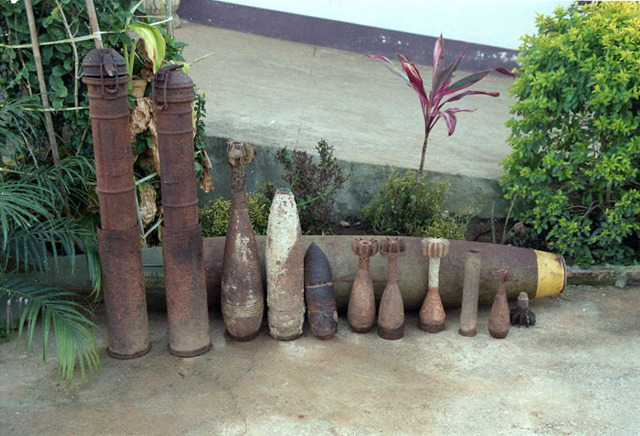 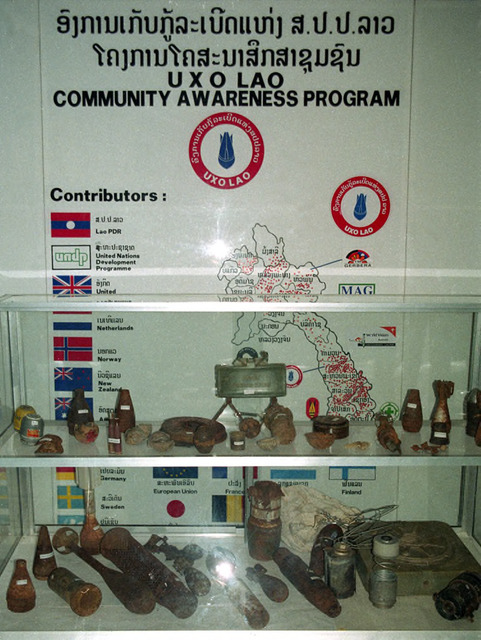 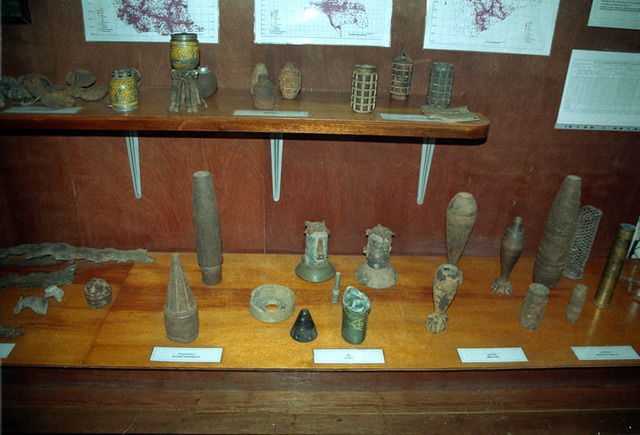 Resourceful people have found multiple uses for the metal that litters the land. Shell casings have been used as troughs to hold feed and water for farm animals. They have made farming implements like shovels and hoes, as well as bowls, buckets, boats, spoons, knives, ladders, cowbells, and pedestals for satellite dishes. Because metal is so precious in Laos, poor people often risk their lives to search for bombs to take to smelting centers for additional income, sometimes with dire consequences.(Fig. 2.6-2.11) 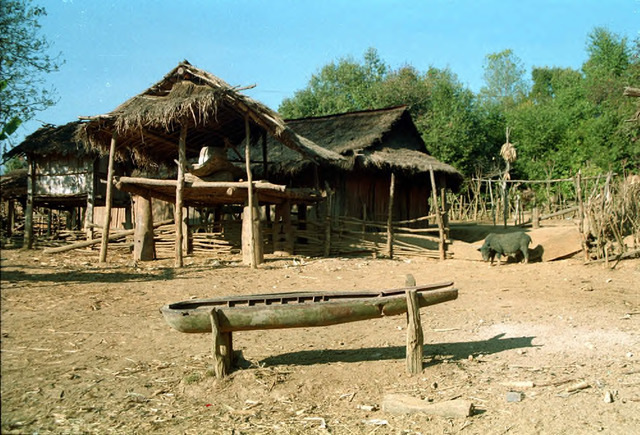 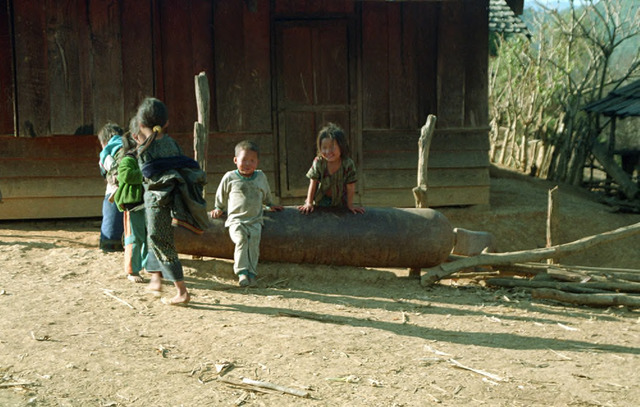 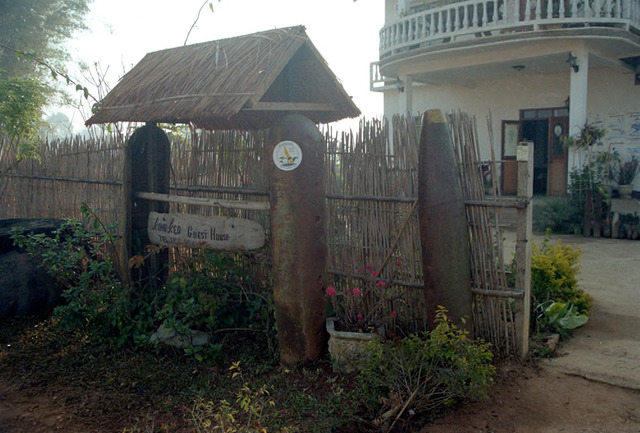 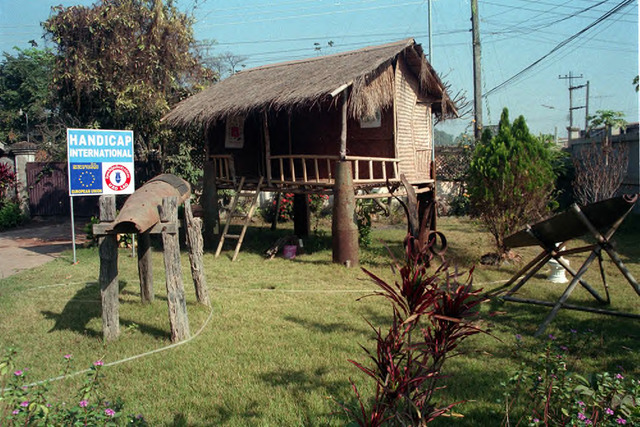 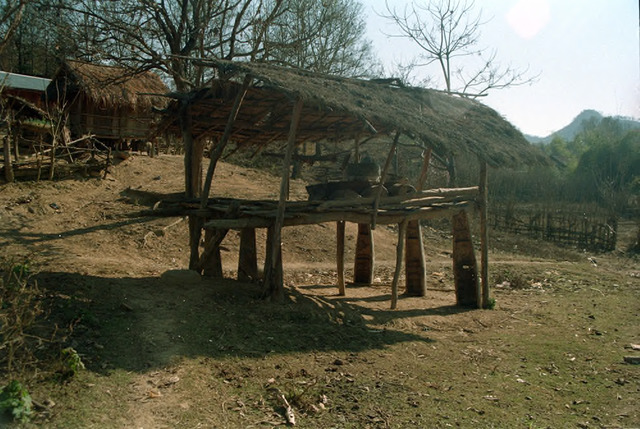 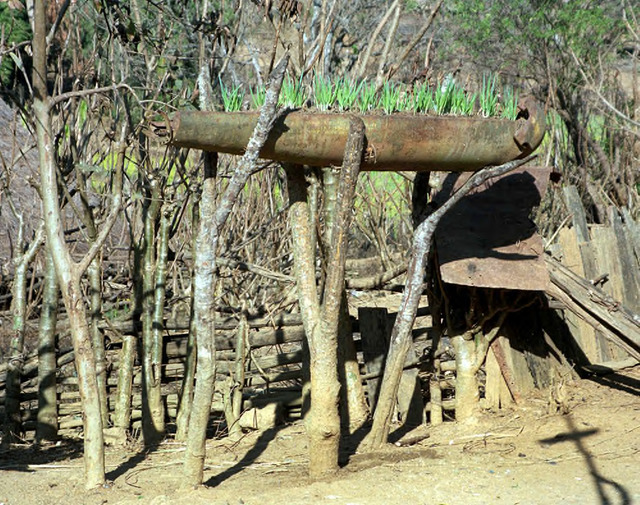 According to Representative Michael Honda, a Democrat from California, “the United States has contributed an average of about $3 million a year to bomb-removal efforts in Laos. In contrast, the U.S. spent more than $2 million a day (about $17 million in today’s dollars) dropping the bombs.” In 2008, at a conference in Dublin, over 100 countries agreed to ban cluster bombs. Currently 111 nations have signed the Convention on Cluster Munitions and of those, 73 have ratified it. The United States, Russia, China, and Israel, however, did not sign the treaty.

Sheila Pinkel is a professor emeritus of art at Pomona College,and an artist who exhibits her work nationally and internationally. Her work deals with making visible the invisible in nature and culture. During the 1980s she focused much of her artwork on the growth of the U.S. military industrial complex and its expansion abroad. From 1990 to the present time, she has sustained an extended project researching and photographing the aftermath of the Indochina wars. To date, she has photographed and interviewed Hmong people in China, Laos, Vietnam, Thailand and the United States. She is also an international editor of Leonardo, the periodical dedicated to the intersections of art, science and technology.