The media constantly features young Korean pop singers in their glittering costumes and flamboyant postures. The nuclear family has taken over traditional four to six person families. So-called ‘Alpha girls’ excel in learning and leadership in junior and high schools, reshaping views about women. A large number of young women who have learned to develop themselves occupy government-sponsored jobs after taking state examinations which provide opportunities based on high scores rather than being based on sex or age. Self-confident, stylish and ambitious young women are at the core of low birth rates and are past the Confucian traditions that defined Korean society while boasting a rapid economic development relying on a well-educated, young labor force.

Concessions to the western model of modernity has led Korea to an ultra-post-modern testing bed of competitive ideas and values after experiencing several wars in and outside the peninsula as well as, decades of development-driven policies to adopt capitalism. Old paradigms and values are constantly being challenged by fresh ones. From ordinary households to wedding halls, mixed, hybrid cultural models dominate Korean daily life. The four photographers introduced in this exhibition demonstrate the fluctuating horizons from feminine perspectives. Their cameras capture the uneasy, unsettled moments that reflect the current status of living in Korea, a country where speed and accomplishment are competing with the virtues of modesty and morality as core values.

Kim Oksun’s daily life lies in the border of two cultures, Korean and foreign. Having married a German and rearing a bi-racial daughter in Korea, she photographs people from different racial and cultural backgrounds. Kim’s well-known Happy Together (2000–2004) series tests social-cultural prejudice embedded in Korean culture that long emphasized racially homogeneous society. She uses prejudice as a frame and starting point to capture glimpses of the prosaic, personal lives of inter-racial couples in their households, including her own. Yet, the couples’ direct stare make the viewer uncomfortable. Theatrical and static, Kim’s photographs perpetuate the discomfort seen in the previous Woman in a Room series (1996) in which a nude woman, young or old, stands in her own room surrounded by personal belongings.

Resistance to the changing ethnic fabric among Koreans motivated Kim to touch upon the faces of the multicultural Korean society. Hamel’s Boat series documents the lives of nearly 70 foreigners in Korea. Inspired by the story of Hamel, a Dutch citizen stranded in Jeju Island by a typhoon in 1653 on his way to Japan who eventually escaped Korea 14 years later. Kim discovers people from diverse countries who work and live in Jeju Island where she lives with her family. Captured by her Horseman Field Camera with a 150mm lens and a 90mm wide lens are contemporary Hamels who voluntarily drifted to the island, mostly living as singles while maintaining or abandoning their own cultures. She is currently working on the new series No Direction Home which documents the lives of foreigners in Korea. 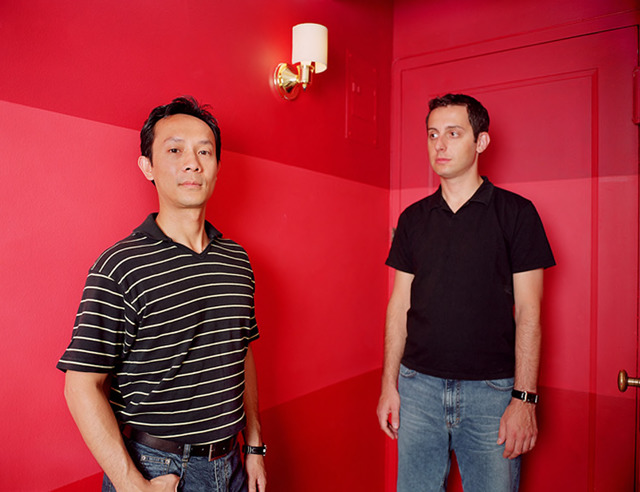 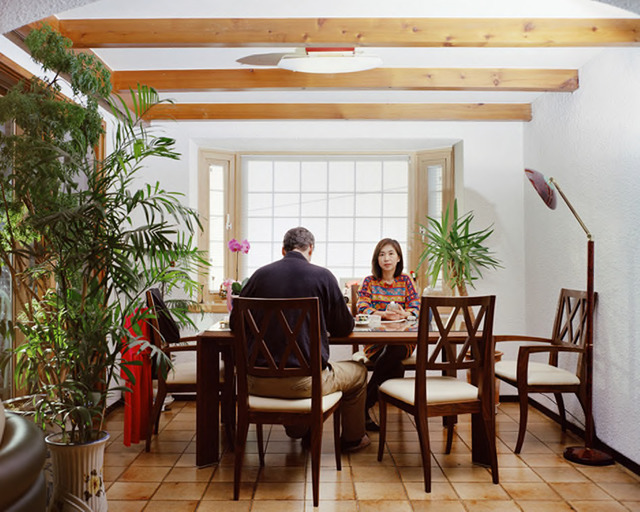 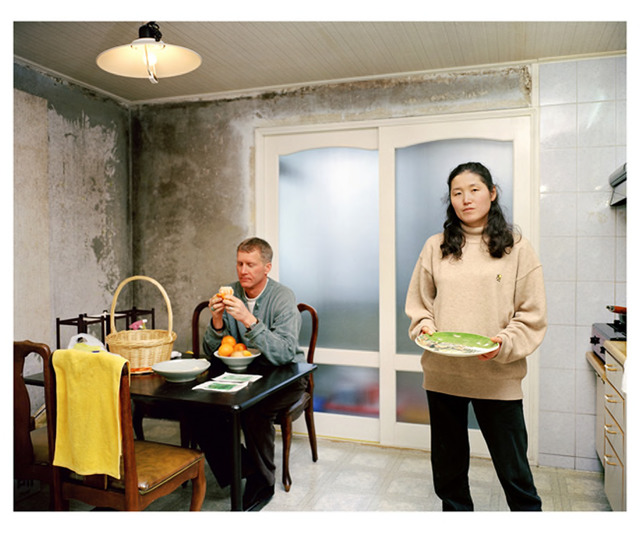 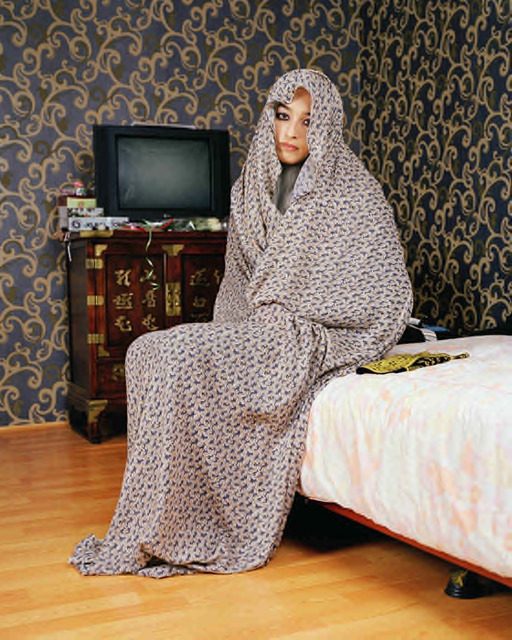 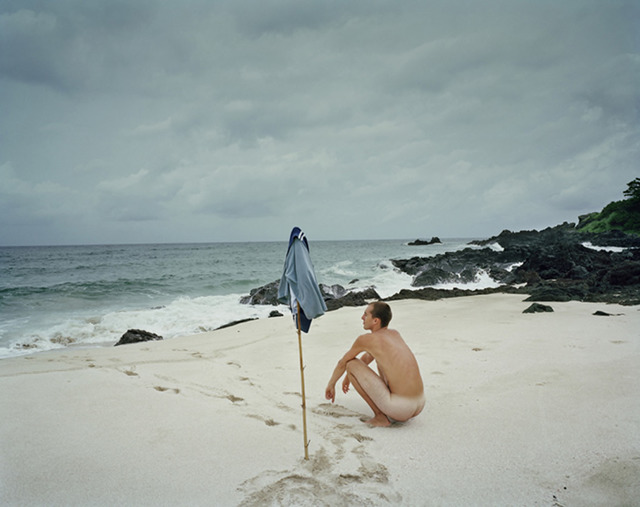 Shin Eunkyung turns to spaces that bring family members together yet reveal their desire to look like well-to-do bourgeois in fantastical setting: wedding halls and photo studios. Playing up with the notions of the real and the fake, and the ideal and the real, Shin’s photographs reflect the everlasting, non-negotiable values of ‘happy marriage and happy family’ fervently upheld by the Korean middle-class. Her projects were triggered by the childhood memory of her family portrait taken in a commercial photo studio: Her family looked like a perfect well-to-do family in the commissioned portrait concealing their fragile states. She takes photo studios as sites that function as simulacra of bourgeois desire to create perfect family images. Captured in her Photo Studios appear surreal, theatrical settings often exposing their artificiality through unfinished lines and kitschy furniture. Her Wedding Hall series also captures dreamlike stages often used by young Koreans. Preferred over churches or temples, wedding halls became popular sites for marriage for their idealized settings and convenient reception spaces. Once extremely difficult to make reservations, the wedding halls are now struggling to survive because of the increasing rates of singles which according to the 2010 statistics rates, are 37.9% for the age group 25 to 49 in Seoul. 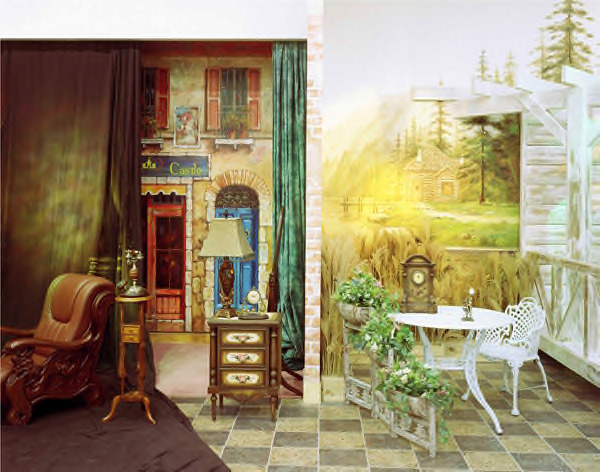 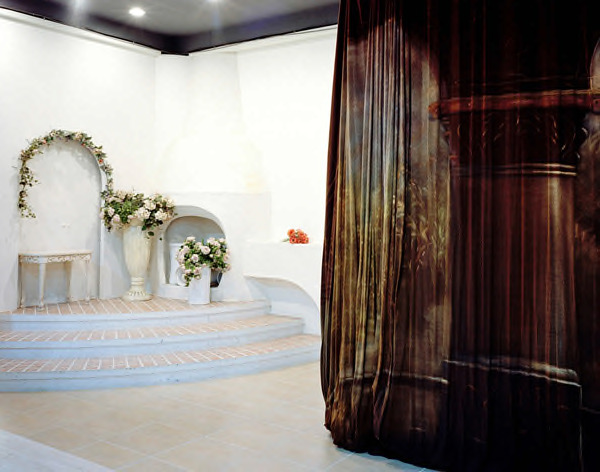 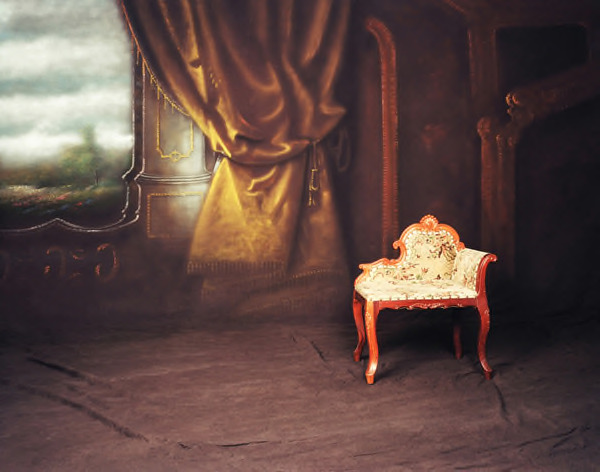 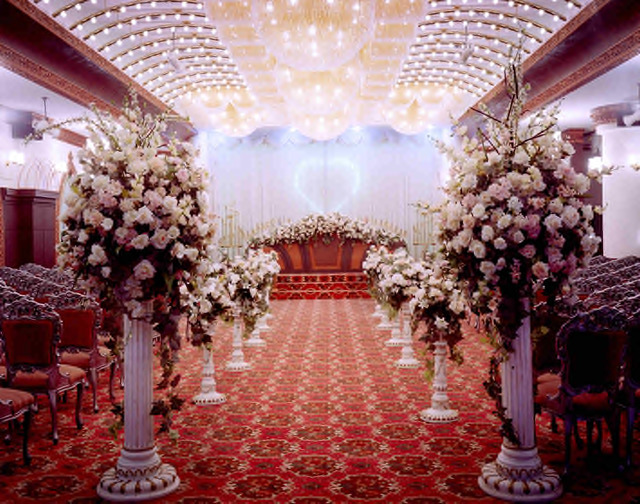 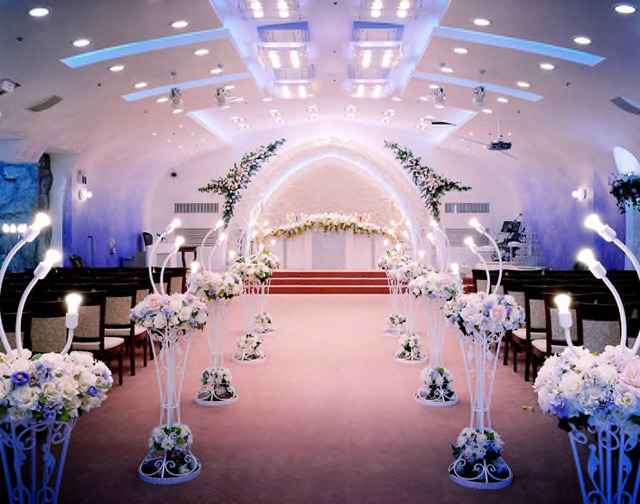 Being a mother and artist, Lee observes the lives of Korean women and points to their social position constructed by class, history, and the conflict between tradition and modernity. Her Woman’s House series, begun in 2000, portrays a patriarchal moment in family gatherings which reveals the mother’s position during ceremonies and simple daily routines. Her recent Do-gye Project also includes rural families struggling to keep traditional life after their children left for the city. Lee chose Do-gye as the barometer of Korean households where modernity is juxtaposed against tradition: for it became a small village with a decreasing population after the coal mining business collapsed in 1990s. A closer look at her photographs shows us that women still play traditional roles in households even while being surrounded by modern culture.

Lee also focuses on urban families whose values are more affected by the ‘spectacle’ of society. Over the last several decades, satellite cities full of apartments have mushroomed everywhere for middle class Korean families to nest. Lee who lives with her daughter in one of these apartments, portrays the pristine, stable life of young parents and with children like hers. Lee captures the transference and reflection of parental desire to the children through a series of family portraits that depict mother/daughter or father/son in similar fashion. Almost everything in the scenes-from interiors to fashion and accessories, reveal the status quo of young parents and their daughters/sons changing from obedient children to self-confident young people. 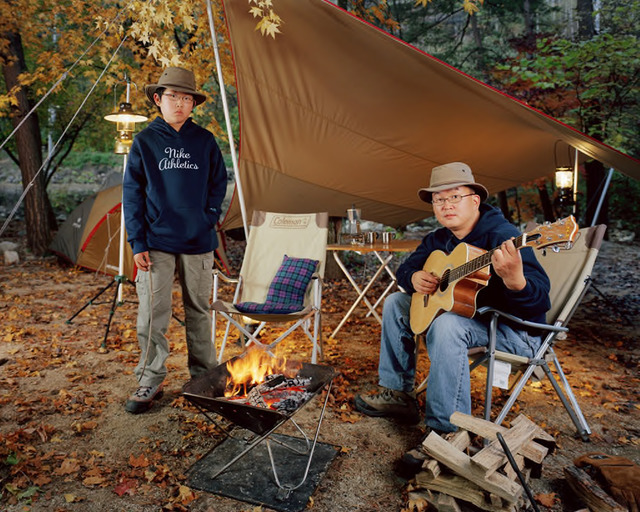 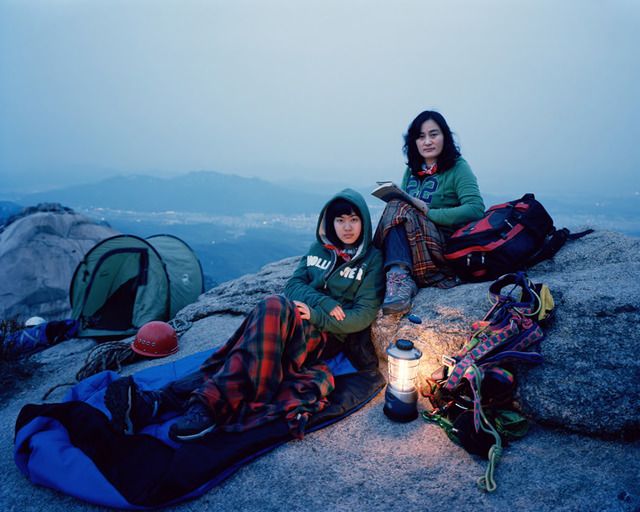 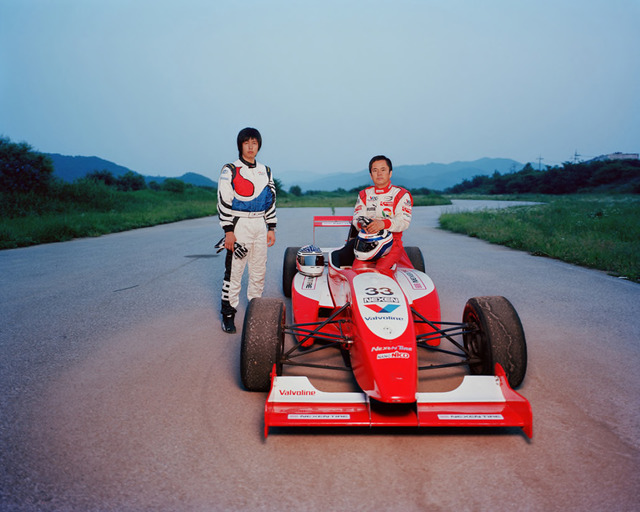 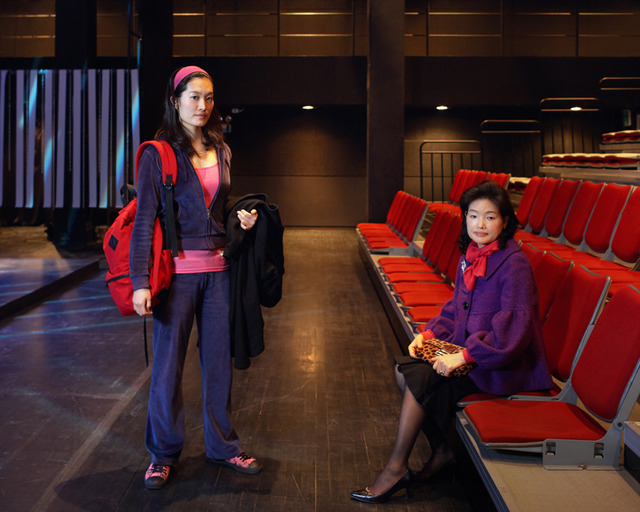 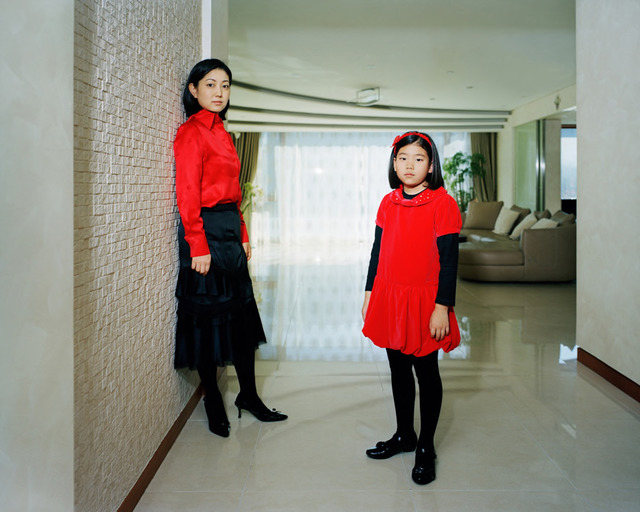 Bek has photographed matriarchal cultures in Asia, following the footsteps of her mentor Kim Soo Nam (1949–2006) who pioneered in photographing ethnic minorities in Asia in 1980s as a photo journalist: ideological, national barriers never stopped his passion to discover the lives of disappearing tribes. Accompanying her mentor’s trips to Asia in the 1990s, she discovered her own lifelong theme of women’s roles and lives in diverse cultures. She recently focuses on Korean women highlighting the contrast between lives of urban women and those of rural women.

Her Single Women series captures the free yet lonesome lives of single women who occupy diverse jobs in metropolitan cities and find it difficult to pursue both marriage and profession. Supported by a local government’s project (Gangwon Documentary Photography Project) in 2008, her Jong-bu series extends her earlier interest in Asian matriarchs to rural Korean women maintain traditional culture. Recorded in her Jong-bu series are the painstaking and orderly lives of aging Jong-bu, the first daughter-in-law who leads the housekeeping of the traditional prestigious family. The first and foremost duty of Jong-bu is to learn the family recipes for various rituals and seasonal gatherings which are mostly managed by male members of the family. Bek traces the senior Korean women’s daily routines inside the Jong-ga (the family headquarter where the first son safeguards the family traditions with his wife) from making Gimchi and liquor to setting the table for the ceremonies. 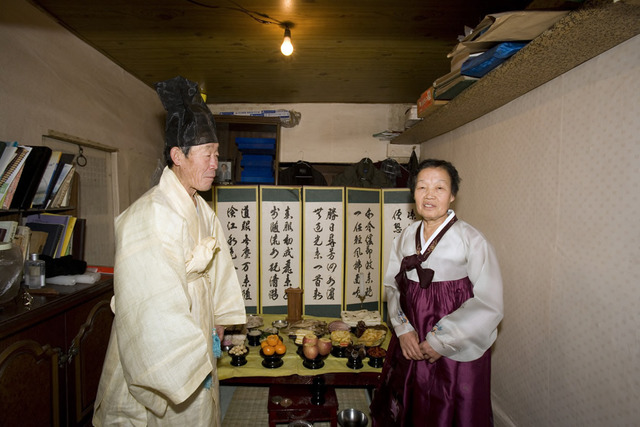 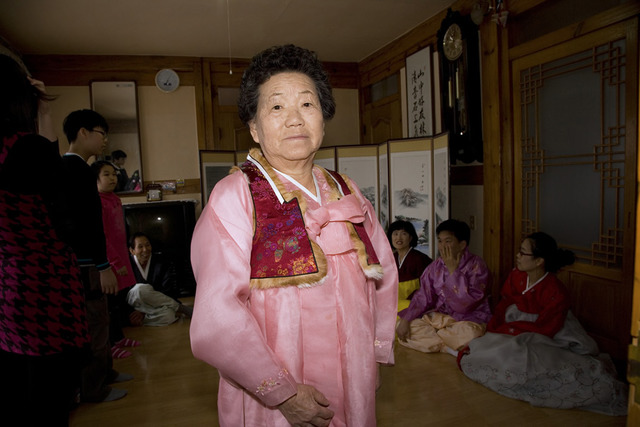 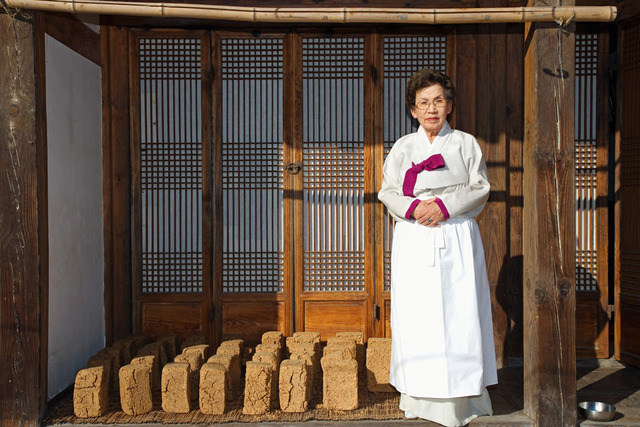 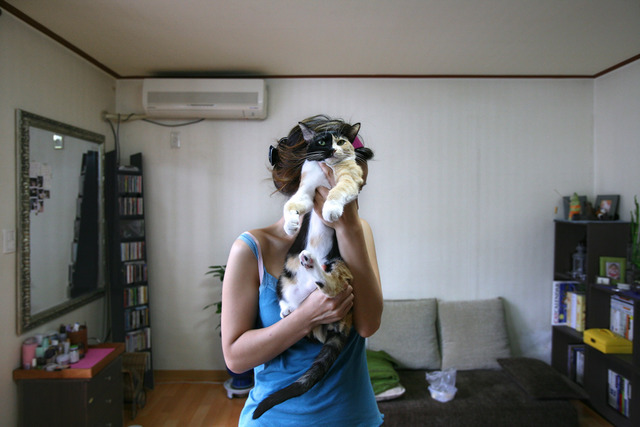 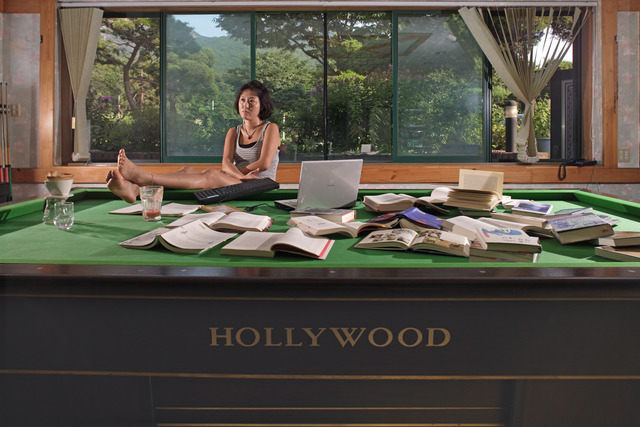 YANG Eunhee is a Seoul-based curator, critic and art historian. She has curated exhibitions in New York and several cities in Korea, and published articles on the issues of surrealism, gender, sexuality, and globalism. Among her recent projects are 2009 Incheon Women Artists’ Biennale, and Close Encounter (2010) at the Jeju Museum of Art. She contributes exhibition reviews and essays to Art in Culture and Art in Asia as well as academic articles to journals in Korea.