In 2010 the city of Hanoi observed the anniversary of its founding in the year 1010. A thousand years later, the twelve months of official celebrations, exhibitions, and public entertainments reflected nothing if not unity of message: Hanoi is arrived as a modern, urban Asian capitol.

After many decades of political and economic isolation, this was an important message to project even if it only reverberated internally; it is unlikely that the anniversary was noticed much beyond the borders of Vietnam or even the city limits. Hanoi is a far different city than it was both in 1010 and even as recently as a decade ago – and it’s a far more complex urban environment than the state-approved observances would ever indicate.

Distinct from all this, in July 2010 the British Council in Hanoi funded my proposal to commission several photographers and filmmakers to make a loosely structured visual document of the Long Bien neighborhood, an area I have photographed in often during the last several years. Long Bien is the kind of community every large or small city has – marginalized, poor, and filled with people who have either always been there or have nowhere else to go. It’s at the edge of the Red River and is bisected by the French-built Long Bien Bridge, heavily damaged by American jets decades ago. For many who live in Long Bien, the year of celebratory concerts, the new lights around the city, the infrastructure improvements – these things happened somewhere else in the city. Not in Long Bien. Whose thousand, then?

I called the culminating four-month long project - in the form of four portfolios of photographs and four short films – The Long Bien Picture Show // Buổi Chiếu Bóng Long Biên. I set out to produce something simple and open ended. With no question to answer or theme to impose, I chose three other photographers besides myself whose past work I admired and whose commitment to making their own work meshed with my own. This was the central conceit of the project – each photographer (and filmmaker) would simply make the work they wanted, respond to the idea and the area in the way they wanted, with the thought being that the confusion of perspectives might better reflect the place. The place simply is and the people are simply there; it is enough to set out to show this without trying to create meaning. Whose Long Bien anyway?

Boris Zuliani is a French commercial and fashion photographer who has lived in Hanoi as long as I have – since 2007 – and makes a great deal of his personal work on Polaroid film. I met Khanh Xiu Tran, a young Viet Kieu (overseas Vietnamese) woman in late 2009 shortly after she moved to Hanoi and, after seeing her quiet and devastating images of the unrest in Bangkok in early 2010, I knew I wanted to involve her. Barnaby Churchill Steel made a remarkable series of panoramas in Hanoi for a separate British Council project in 2008 and it took little to convince him to return to Vietnam to make more. The four filmmakers (whose incredible contribution to the project cannot be spoken of enough) were Trần Thị Ánh Phượng, Phạm Thu Hằng, Đỗ Văn Hoàng and Trần Thanh Hiên, all young Vietnamese from Hanoi DocLab - http://www.hanoidoclab.org/ - a documentary and experimental film center.

Two further ideas were at play – the first was to show the work in a popular context. The notion of producing a ‘picture show’ – with all the relevance of a Saturday matinee - appealed to me as a context for exhibition. And then too, at one time in Vietnam, there were ‘buổi chiếu bóng ’– literally, projected shadow session; mobile film units would travel to rural towns and villages where no cinema existed and project films outdoors. These two ideas sat well with my interest in not initially exhibiting the finished works in a gallery context, in a stark white box, as seemed customary, expected even. Instead, all of the portfolios and films were shown in a public, outdoor projected exhibition on five large screens made of sheets of cheap graphics plastic, in the heart of the Long Bien neighborhood in a single, Saturday evening show in December, 2010.

The first image of the top of a man’s head was originally censored from the public exhibition of Xiu’s portfolio. By law, all work shown publicly within Vietnam must first be vetted by government censors, and we were informed that this and two other similarly framed images of Xiu’s couldn’t be shown because “they would make Vietnamese people feel uncomfortable” in the way the incomplete human figure was portrayed. After an appeal, all her images were eventually permitted to be shown.

Xiu’s parents are originally from Hue in central Vietnam and she grew up in Minnesota. She was living in Long Bien while she worked on this project.

Of this series Xiu wrote: I am interested in photography as a medium for this kind of self-expression where years of collected moments could form a whole and make a quiet statement without ever using words. I used to say that the content of my work was random. It was interesting, then, to see the pattern that formed in what I chose to photograph. I saw that the photos reflected my relationship with the neighborhood, and feelings about being isolated in my parents’ native land. 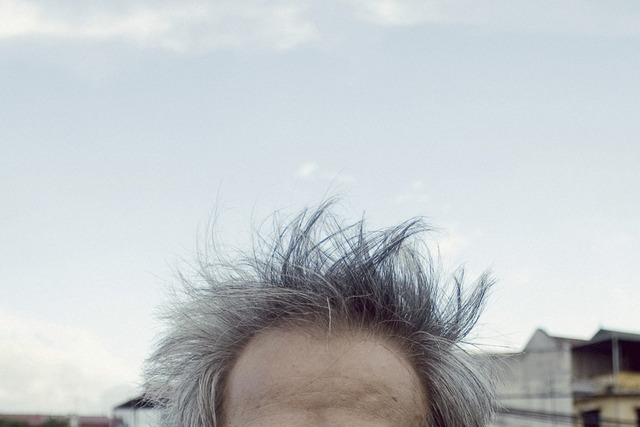 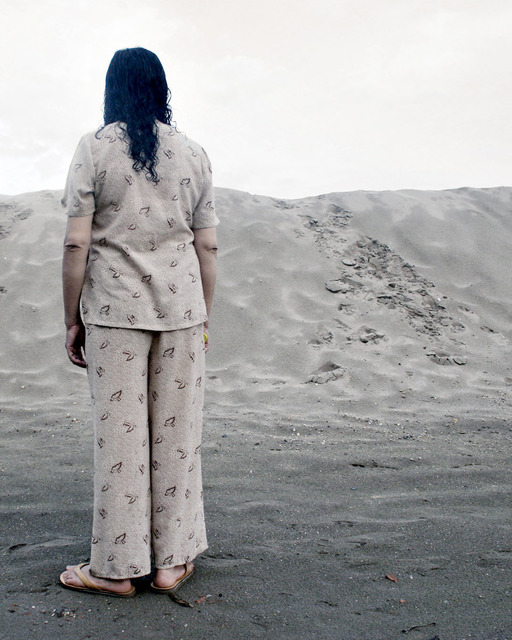 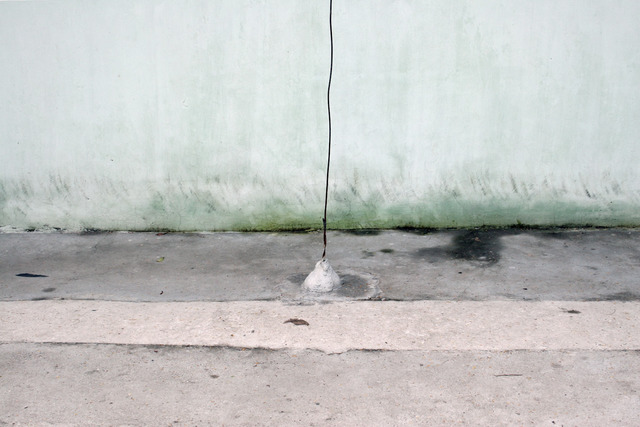 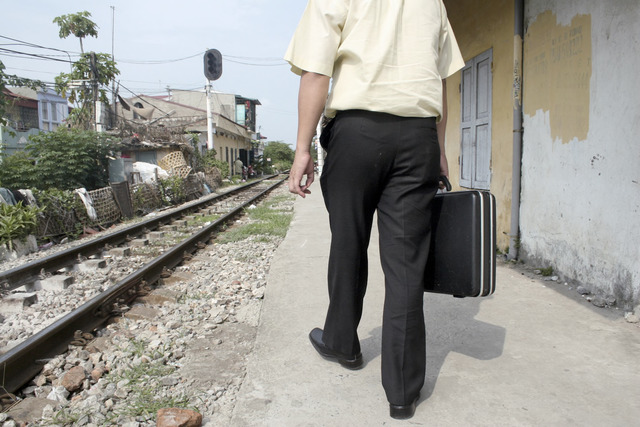 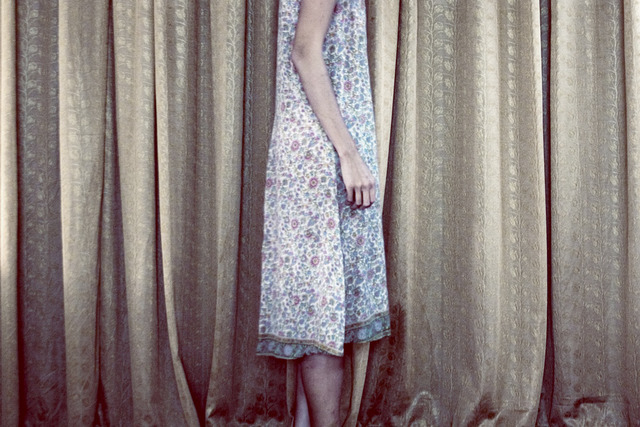 I have been making portraits at night in the streets of Long Bien for over a year. When I began, I was interested in making work that required creating some kind of relationship and collaboration to produce an image. As a westerner living in a very homogeneous Asian society, I am very distinct and very noticed wherever I am. As a photographer here, there is only the illusion and rarely the actual possibility of being an invisible observer. In making these portraits I’ve endeavored to work noticed.

Given my background as a cinematographer, it seemed natural to bring in lighting as an element in this work – a studio in the streets. I also had in mind to embrace a middle distance with the camera while at the same time looking for some small nuance of the person, the place and the time within the frame 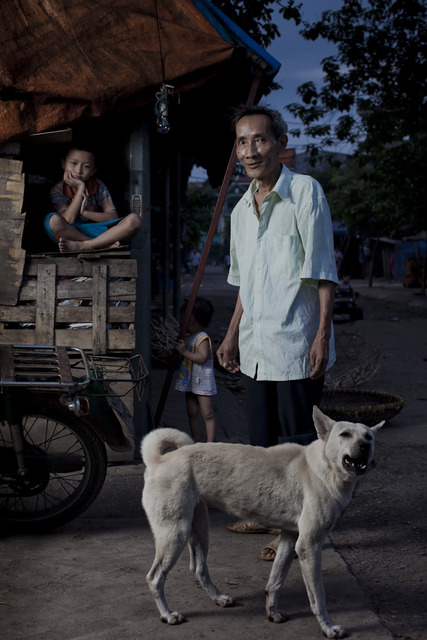 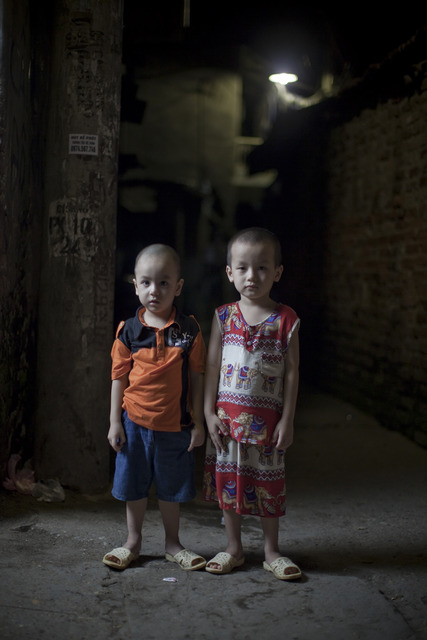 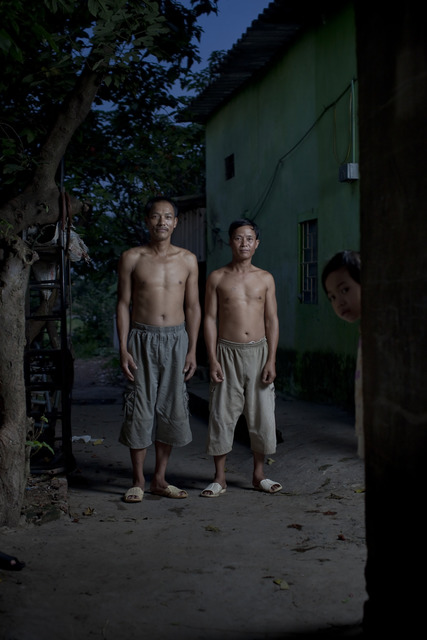 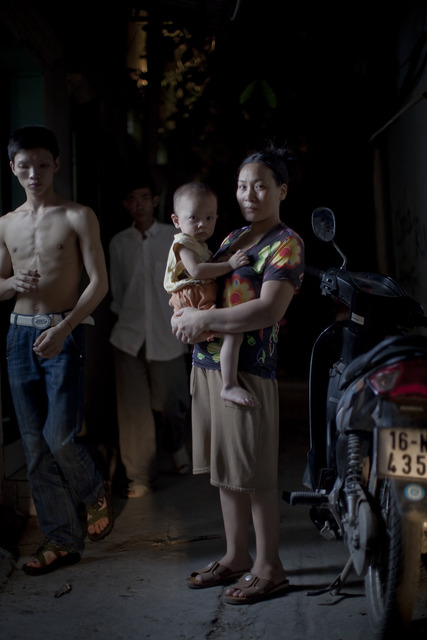 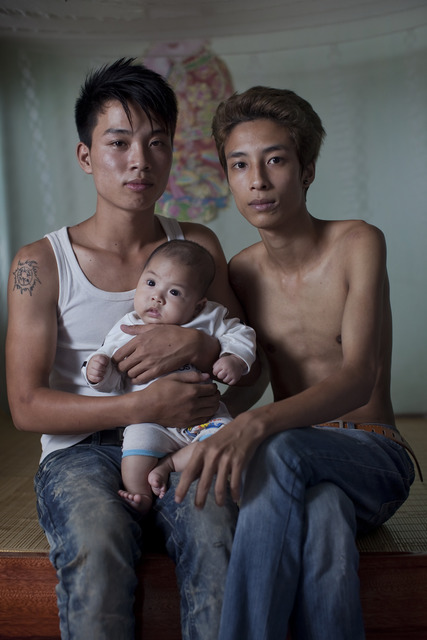 With a technical background in high-end animation and digital visual effects, Barney wouldn’t seem like an obvious choice for a social documentary project. Even so, his technically brilliant and aesthetically remarkable panoramas belie their simple appearance. Each long image is constructed of dozens of individual photographs which are seamlessly stitched together. The resulting photographs are endlessly unfolding dramas of the ordinary which are both wide and deep. Time is also an essential, though less obvious element of these wide slices of space. Each of the individual frames of the completed final image was photographed numerous times; selected elements were then combined with other selected, final elements to create a clarified whole from a confusing assortment of possible choices. Clues to his process are visible to the careful observer when, at times, a person will appear more than once within the same photograph.

The death of Polaroid as a format has been foretold often. But it persists. Boris makes nearly all of his personal photography with any Polaroid film he can obtain. For this series he made light paintings using outdated Polaroid film. With an unpredictably shifted color spectrum, his images seem at once slyly commercial and instantly antique.

Boris photographed young couples who regularly gather at night by the dozens, sometimes hundreds, on the Long Bien Bridge where the air is cooler in the summer. With exposure times of typically one minute, the people in Boris’s photographs had to hold completely motionless as he stepped into the frame with a Xenon flashlight to place the light precisely where he chose. The original, one-of-a-kind Polaroids are scanned and exhibited with the border intact. 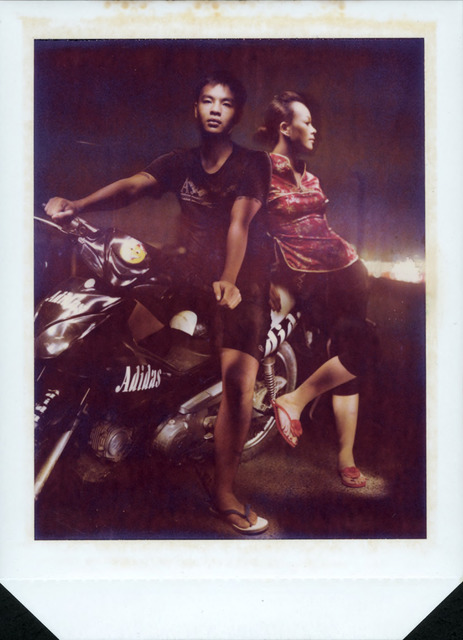 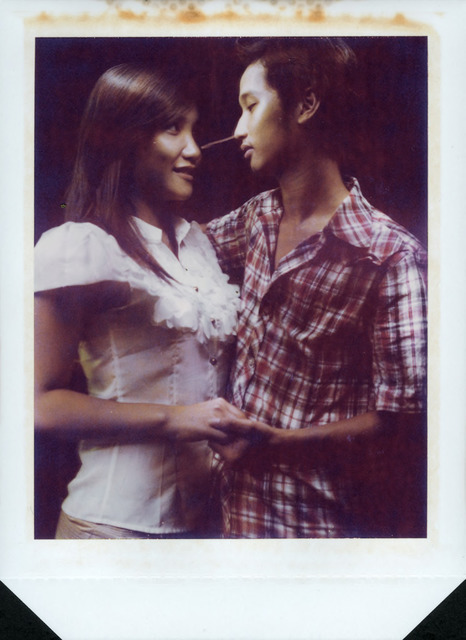 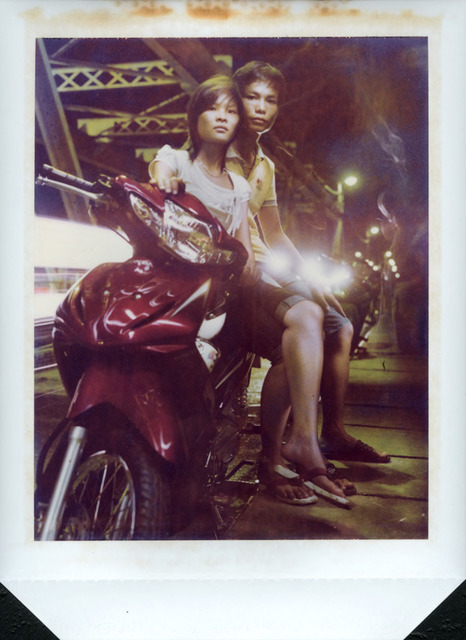 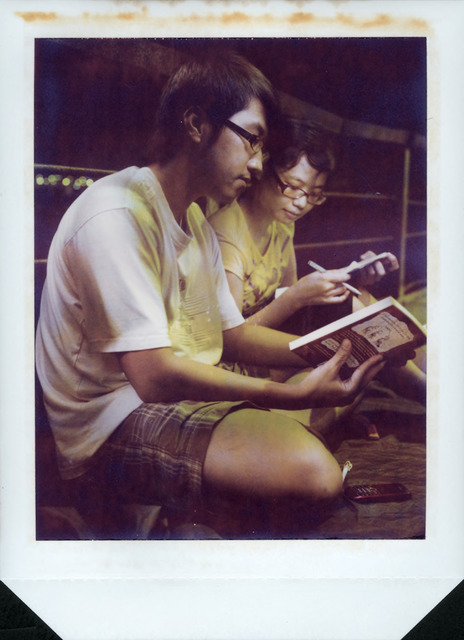 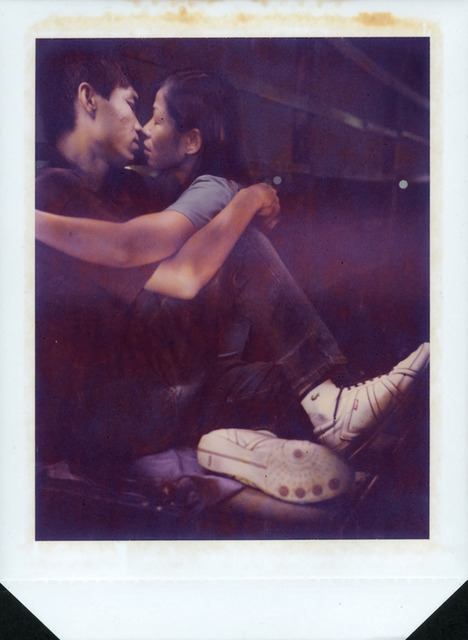 The four portfolios of photographs - in their projected ‘slide show’ format – and the four films from The Long Bien Picture Show can be viewed online at http://vimeo.com/longbienpictureshow. A short clip of the original outdoor exhibition in front a government sports center in Hanoi can be viewed at http://www.youtube.com/watch?v=4bbL4GfBg3E.

Jamie Maxtone-Graham has a background in commercial and narrative cinematography, independent filmmaking and photography beginning in New York City and more recently in Los Angeles. In 2007-08 he became a Fulbright Research Fellow photographing contemporary youth culture in Vietnam and has remained living in Hanoi and working on diverse projects in the region since.