Proceedings of the Michigan Meeting 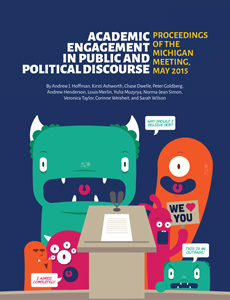 This report and the conference it summarizes are an examination of how we as academics practice our craft—how we work to make it more relevant to broader publics and more responsive to pressing societal problems. It is about the kinds of research we conduct, but even more, it is about the public meaning and goals of that work. Ultimately, it is about who we are as a university and what it means to be an academic in a society facing complex scientific, technological, and social challenges. We come to this discussion driven by a deep concern that the academy is facing a crisis of relevance. That crisis is driven by multiple forces that are compelling change.

The first set of forces relates to the quality of the public debate around the critical issues of our day and the limited extent to which academic scholarship informs it. Consider, for example, the current debate over climate change. A recent study found that, of the more than four thousand academic papers that expressed a position on climate change between 1991 and 2011, 97.1 percent agreed that climate change is occurring and is anthropogenic.[1] This is consistent with numerous other studies showing similarly conclusive results[2] and the consensus of more than two hundred scientific agencies around the world.[3] And yet the most recent surveys of public attitudes on climate change show that only 65 percent of American adults believe that there is solid evidence that temperatures on earth have increased during the past four decades,[4] and the number of Americans who believe that “most scientists think global warming is happening” declined from 47 percent to 39 percent between 2008 and 2011.[5] More important, there is a sharp partisan divide on this issue with implications for our political discourse at the state and national levels; the latest surveys show that 81 percent of Democrats and 42 percent of Republicans believe there is solid evidence of global warming.[6] 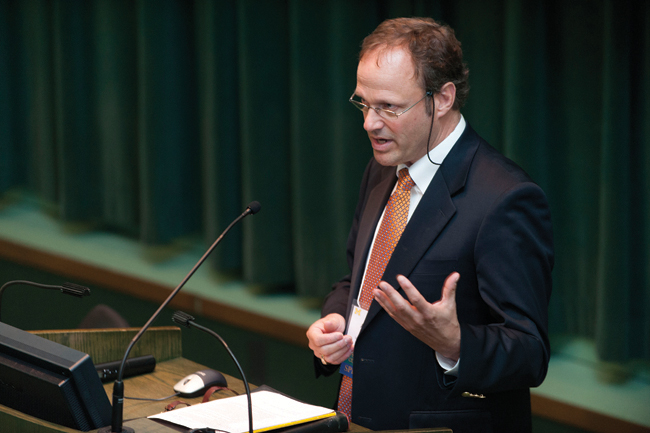 This is but one example of the startling disconnect between the consensus of the academy and the understanding of the general population. A January 2015 Pew Research Center study found a similar divide on other topics: 87 percent of scientists accept that natural selection plays a role in evolution, while only 32 percent of the public agree; 88 percent of scientists think that genetically modified foods are safe to eat, but only 37 percent of the public agree.[7] In a particularly extreme example, many parents have chosen not to vaccinate their children for fear of autism, despite the vehement rejection of that causal link by American medical institutions.

This is a cause for concern. In our increasingly technological world, issues like nanotechnology, stem-cell research, nuclear power, climate change, vaccines and autism, genetically modified organisms, gun control, health care, and endocrine disruption require thoughtful and informed debate. But instead, these and other issues have often been caught up in the so-called culture wars. Though this effect is not uniform—a July 2015 Pew Research Center study found that views on climate change and energy policy are more affected by ideology than those on food safety, space travel, and biomedicine[8]—this problem is exacerbated by the fact that the public is not well versed in science. According to the California Academy of Sciences, the majority of the US public is unable to pass even a basic scientific literacy test.[9] The National Science Foundation reports that two-thirds of Americans do not clearly understand the scientific process.[10] A survey by Research!America found that two-thirds of Americans could not name a single living scientist. Of the one-third that could, half named Stephen Hawking.[11] This lack of knowledge coupled with an increased degree of antagonism toward science prompted National Geographic in March 2015 to devote its cover story to “The War on Science.”

Numerous factors help explain these disconnects between scholars and the public (such as motivated reasoning, political power, and economic interests), but the particular explanation we wish to address in this report is the extent to which the academic and scientific communities have been ineffective or disengaged in explaining the state and gravity of scientific findings. While academics often “believe the public is uninformed about science and therefore prone to errors in judgment and policy preferences,” they frequently do not accept any role “as an enabler of direct public participation in decision-making through formats such as deliberative meetings, and do not believe there are personal benefits for investing in these activities.”[12] Instead, many remain on the sidelines of important public and political discourse. For the benefit of society’s ability to make wise decisions and for the benefit of the academy’s ability to remain relevant, the academic community needs to accept some form of public engagement.

There are other forces that extend this crisis of relevance for the academy. First, social media is democratizing knowledge—changing the channels through which science is communicated and who can access them. But the academy is not keeping up. While we write our papers in academic journals and think we have contributed to public discourse, others can publish competing reports and use social media to have far more of an impact on public opinion. Massive open online courses (MOOCs), open-access journals, blogs, and other forms of new educational technology are altering what it means to be a teacher and a scholar. Adding to this changing landscape are a rise in pseudoscientific journals[13] and a growing trend among state legislatures to cut funding to higher education, oftentimes motivated by a professed lack of appreciation for the value that the academy provides to society. These factors, coupled with the rapidly rising cost of higher education, lead to an antagonism toward the academy that has become alarming.

This confluence of forces led The Economist to wonder if America’s universities could go the way of the Big 3 American car companies, unable to see the cataclysmic changes around them and failing to react. The article cited pressure on faculty to do more research, growing administrative staff, and rising costs. (Median household income has grown by a factor of 6.5 in the past forty years, but the cost of attending state college has increased by a factor of 15 for in-state students and 24 for out-of-state students.)[14]

But all is not lost. Promising changes seem to be afoot. In particular, young people are coming to the academy with a different set of aspirations and goals than their senior advisors. They are speaking with their feet and undertaking outreach and engagement activities on their own. Representative of this growing desire for a more engaged career, of the two hundred academic registrants at this conference, nearly one-third were PhD and postdoctoral students, and they wonder about the future relevance of the academy and of their careers. They are the future of the academy, and they are changing.

But academic scholars are often not trained or given the proper incentives to engage with the public. Indeed, many of us are culturally biased away from this kind of activity, which is often viewed as a waste of time at best and anti-intellectual at worst. Other academics avoid engagement for fear of being seen as elitist in a contemporary environment that appears to be suspicious of their authority or expertise. Others avoid it because it can be unpleasant. Many scholars who study topical issues like climate change get their regular share of hate mail. And some receive startlingly harsh treatment (from both outside and inside the academy), diminished stature, harassment through burdensome Freedom of Information Act (FOIA) requests, public inquiries about funding sources, congressional scrutiny, and even direct pressure from outside interests to terminate employment. Academic engagement is an important but risky business.

Yet some scholars decide to engage despite the hazards. In our survey of 330 University of Michigan faculty (see Chapter 7), over 62 percent of respondents give media interviews and 59 percent provide assistance to government agencies. Nearly two-thirds believe that external engagement is complementary to their academic research, although 56 percent feel this activity is not valued by tenure committees and 41 percent consider it to be time consuming and distracting. Roughly 40 percent do not, and never will, use Twitter or Facebook for academic or professional work. Level of engagement appears to be a strong function of the school or department. (Disciplines vary quite widely in their posture toward engagement.) Career stage also makes a difference, with younger faculty expressing more interest in engagement. A Pew Research Center/American Association for the Advancement of Science (AAAS) survey found that 43 percent of 3,748 scientists surveyed believe that it is important for scientists to get coverage for their work in the news media, but 79 percent believe that the news media can’t discriminate between well-founded and less unreasonable or illegitimate scientific findings. Forty-seven percent use social media to talk about science, and 24 percent write blogs. Midcareer and older scientists were more likely to speak to reporters; younger scientists were more likely to use social media.[15]

How can we understand the dynamics of these changes and what they mean for the academy as a whole and the scholar as an individual? This report summarizes a three-day meeting that sought to tease the key questions apart. First, what is engagement, and should we do it? This question goes back at least as far as World War II and debates over the role and value of science in society.[16] Today, with an ever-expanding array of ways to engage, even a simple definition of engagement remains unclear. Second, what are the ground rules? Should junior faculty do this? Should this vary by discipline and by school? Should all academics do this? Does this redefine the role of the senior scholar? Third, what are some models that have worked, and what can we learn from them? Fourth and finally, what are the obstacles to engagement, and how can they be overcome?

We are interested in stimulating a dialogue on faculty attitudes and on best practices that cover a span of external engagement activities, including but not limited to congressional testimony, assistance to government agencies, board service, public presentations, media interviews, K–12 education, blogging, editorial writing, social media, and political activism—all activities that lie outside the “standard” notions of scholarly pursuits.

This meeting and subsequent report were designed to contribute to the ongoing conversation that is taking place in various domains, most notably the National Academies of Sciences’ two Sackler Colloquia on “The Science of Science Communication.” In all, we had 225 registered participants: 200 from academia, 150 from the University of Michigan, and 50 from other schools. We had representation from 43 disciplines that spanned the physical and social sciences, humanities, and professional schools. This was not a meeting of talking heads. All sessions were arranged as discussions with very brief opening remarks and no PowerPoint slides. This was a working session that led to the document you are now holding. We are very pleased to help advance the conversation about this all-important topic.

Next section »
Top of page