Approximately 1.6 million people live in border communities called “colonias,” settlements along the U.S. side of the U.S.-Mexico border marked by inadequate housing and a dearth of basic services. Outside the auspices of local government, these informal settlements are home to the most impoverished households in the U.S.-Mexico border region. While much literature exists on colonias, we lack comprehensive data on their location and their susceptibility to environmental hazards. Intended as a pilot study, this research examines the United States Geological Survey Colonias Health, Infrastructure, and Platting Status (CHIPS) data set, cross-examining this frequently used data with grounded observations from qualitative interviews with colonias nonprofit directors (n = 5). While CHIPS elucidates various health and environmental issues associated with borderland colonias, it has several limitations. First, it miscounts colonias settlements, which causes severe underfunding for programs targeting colonias improvement. Second, because it does not capture the colonias with the greatest need, it creates a positive bias in federal colonias data, further exacerbating the funding issue. The study concludes with two avenues for further research: the need to update CHIPS to reflect the 2010s and the need to expand the definition of ‘colonia.’ 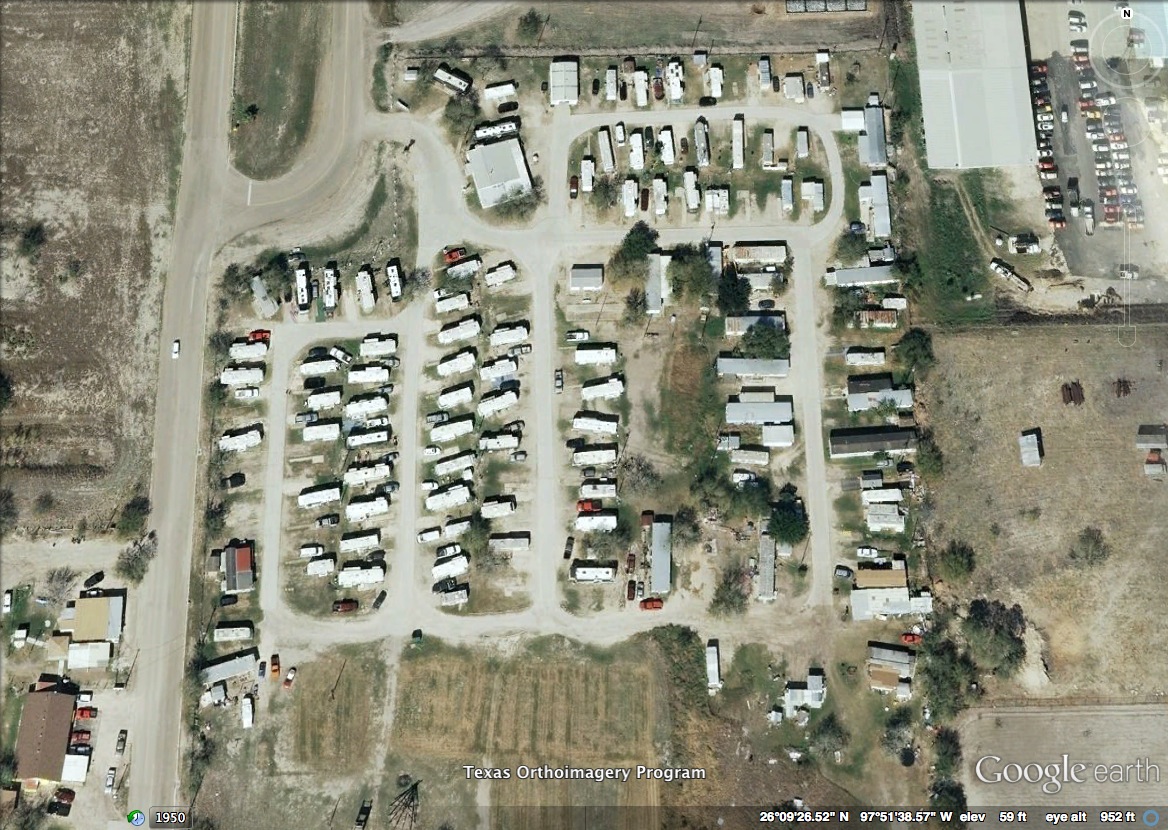 Figure 1: Aerial view of a colonia near Mercedes, Texas in the Lower Rio Grande Valley. This aerial depicts the layout of a typical colonia, showing a mixture of housing types: second-hand mobile homes, repurposed airstreams, and makeshift shacks. To get a sense of the small sizes of the homes and lots, consider the sizes of the homes in relation to the cars parked beside them. Note that this colonia has only partially paved roads.

Self-labeled “The Forgotten Americans,” nearly 1.6 million people live along the United States (U.S.)-Mexico border in highly impoverished communities called “Las Colonias” (HAC 2013). The first colonias were developed in the 1960s as a result of the Bracero Program, which brought Mexican farmworkers to the U.S. to fill job shortages in agriculture (Ward 1999; Arizmendi, Arizmendi, and Donelson 2010). As these workers migrated to cities across Southern Texas, they encountered a severe shortage of affordable housing. Unscrupulous developers, capitalizing on this, illegally subdivided agriculturally unsuitable lands across unincorporated territories near major border cities (Figure 2 shows locations of colonias across Southern Texas). This allowed them to sell these lots to unsuspecting migrant farmworkers, who believed they were legally purchasing land. While residents were promised utilities, few developers kept this promise. Outside the auspices of local government and enforcement, this illegal activity continued unabated for nearly three decades. Numerous community-based organizations (CBOs), most religious, have since advocated for basic utilities and services in the colonias; through community organizing, they lobbied for basic representation and services (HAC 2005; Donelson 2004). 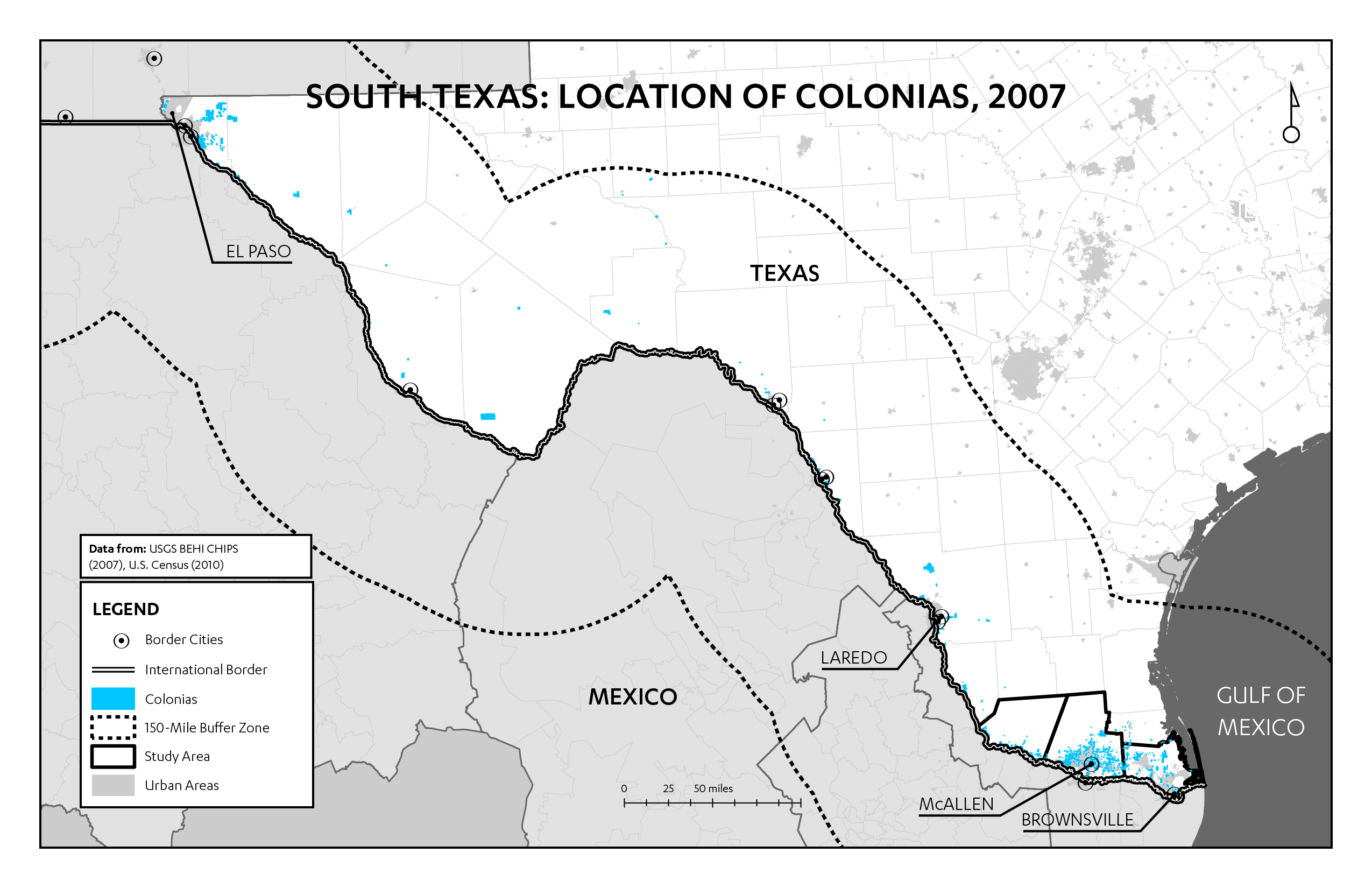 Figure 2: Map of colonia settlements across Southern Texas (data from CHIPS 2007). Colonias are not evenly distributed across the U.S.-Mexico border. Instead, they are more common in peri-urban areas (the lands directly outside of incorporated cities). Mapping CHIPS data across Southern Texas reveals that the majority of colonias are located near El Paso, McAllen, and Brownsville.

In 1989, journalist Peter Applebome published a highly influential story in The New York Times in which he called the colonias “one of the nation’s most wrenching public health problems” (1989: A12). This publicity, coupled with increasing pressures from CBOs, contributed to the federal recognition of colonias settlements in the 1990 Cranston-Gonzalez National Affordable Housing Act. Paraphrased here, the act defines a “recognized” colonia as:

However, this definition excludes hundreds of colonias formed after 1990, which are not locally recognized for political reasons. For instance, Figure 3 shows that 990 colonias are located in Hidalgo County, Texas (CHIPS, 2007), but local organizations have identified over 1,200. The restrictiveness of the Cranston-Gonzalez Act definition consequently affects federal data collection. I argue that this omission may positively bias federal colonias data by leaving out the most at-risk settlements. This hypothesis emerges from a cross-analysis of federal colonias data and qualitative interviews with colonias nonprofit directors. 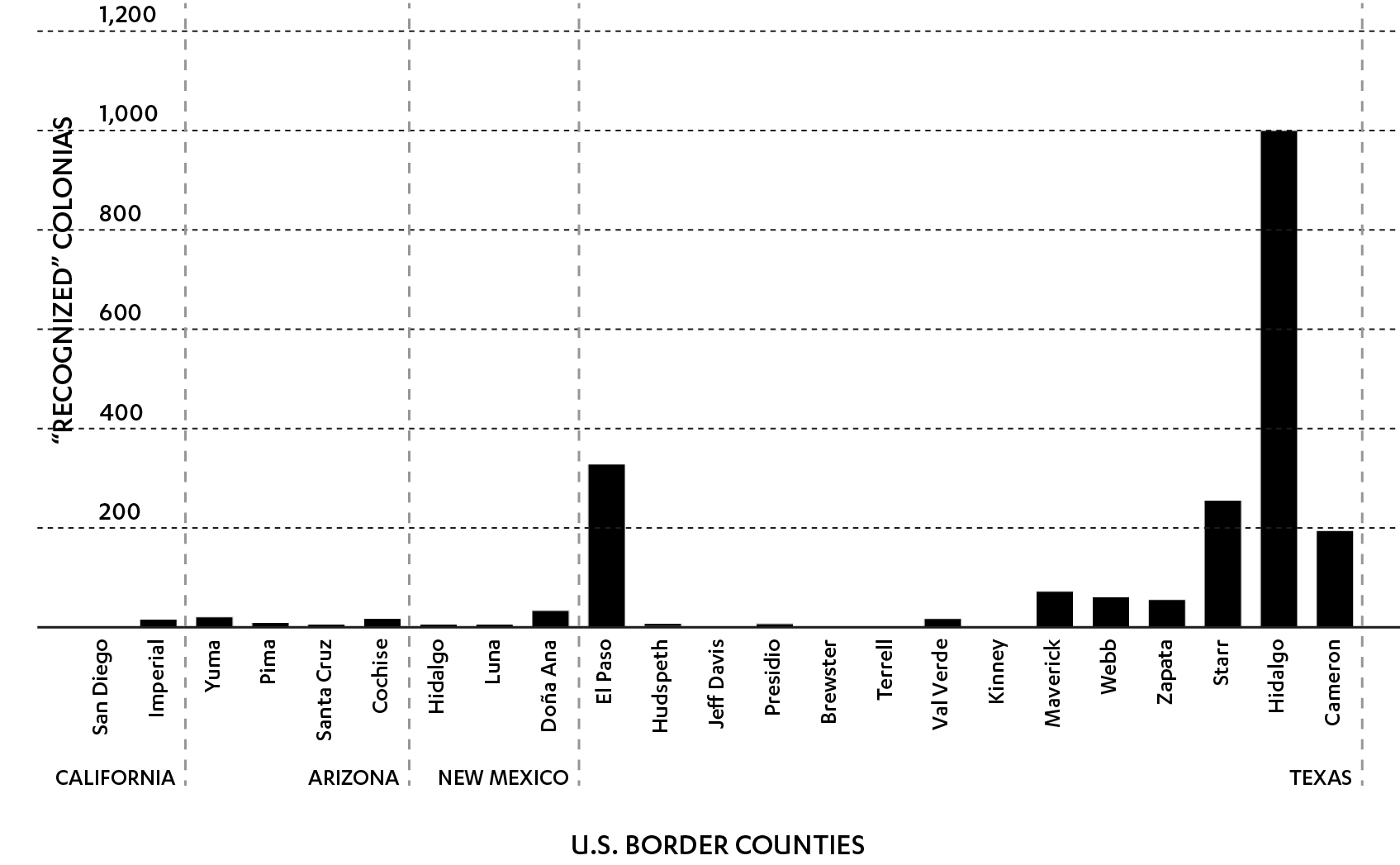 Figure 3: Bar chart of colonias settlements by border county (data from CHIPS 2007). A broader view of the U.S.-Mexico border shows that Texas contains the overwhelming majority of colonias. Beginning with El Paso and proceeding to the right, the two largest clusters of colonias reside at both ends of the Texas-Mexico border.

The main source of information on colonias conditions is the 2007 U.S. Geological Survey (USGS) Colonias Health, Infrastructure, and Platting Status (CHIPS) data set, which is widely used in colonias research. CHIPS was intended to replace an older, less accurate colonias data set for Southern Texas by adding new environmental variables and more precise GIS shapefiles. However, while CHIPS replaces an older dataset, it still has several shortcomings. This study cross-examines CHIPS data with preliminary findings from semi-structured interviews with nonprofit directors of self-help organizations in Hidalgo, Starr, and Cameron counties (n = 5). Preliminary results from these interviews highlight the inconsistencies between the CHIPS data set and grounded realities.

Figure 4: Map of the U.S.-Mexico border locating the Lower Rio Grande Valley. The Lower Rio Grande Valley comprises Starr, Hidalgo, and Cameron Counties in Texas. The region is bordered by the Rio Grande River to the south and the Gulf of Mexico to the east. The region contains several major urban hubs, most notably Brownsville, McAllen, Rio Grande City, Harlingen, and Weslaco. Across the border, these major hubs connect to major Mexican cities, such as Reynosa, Matamoros, and Ciudad Río Bravo.

This analysis uses the three counties of the Lower Rio Grande Valley (Starr, Hidalgo, and Cameron Counties) to study these inconsistencies (Figure 4). Together, these counties contain 52 percent of all recognized borderland colonias (HUD 2014; Texas Secretary of State 2014). This region also hosts the majority of colonia improvement organizations: it is home to 56 percent of all colonias self-help housing nonprofits (HAC 2005). 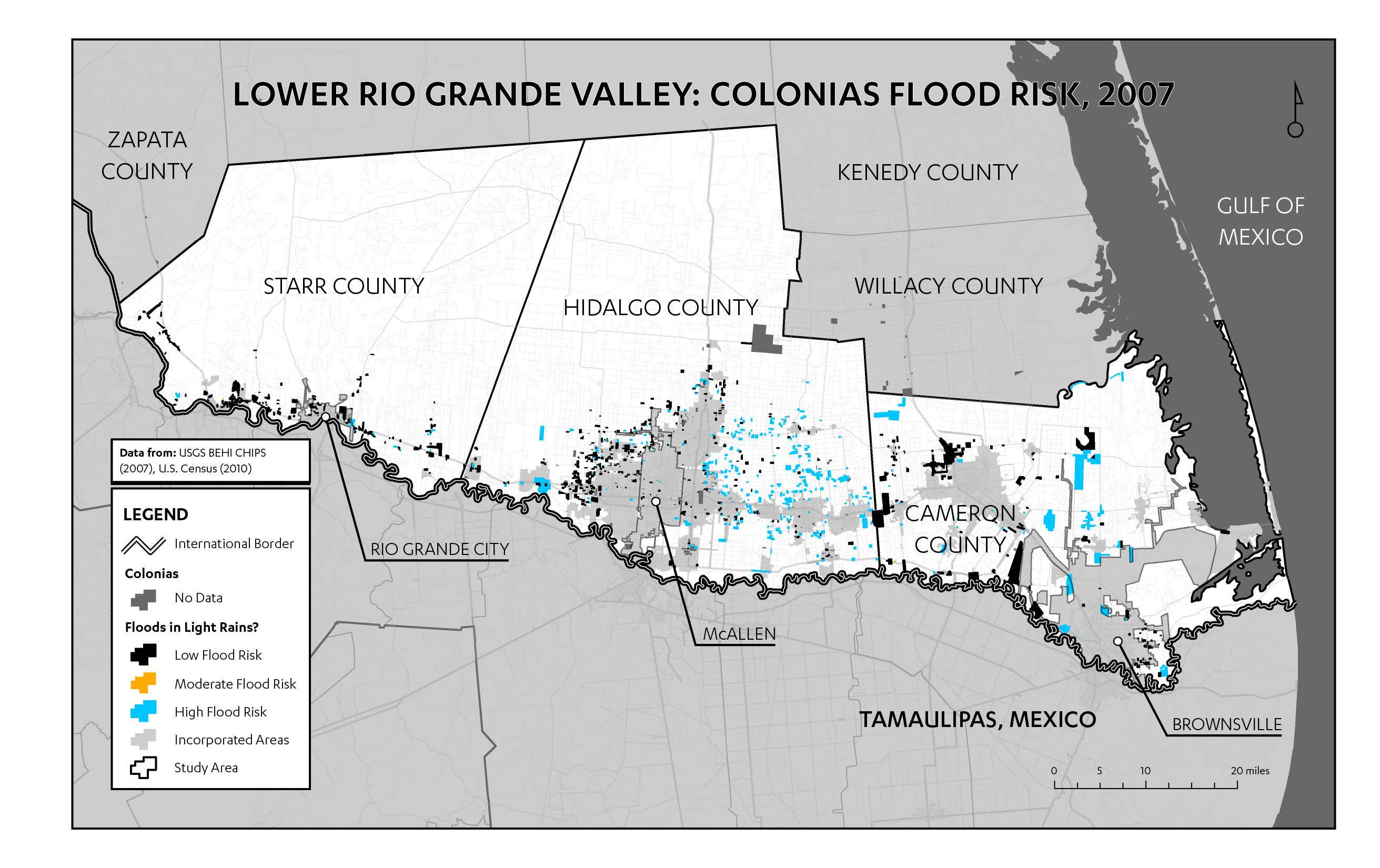 Figure 5: Map of flood-prone colonias in the Lower Rio Grande Valley (data from CHIPS 2007). This vulnerability to flooding is dangerously exacerbated during hurricanes, and due to the Lower Rio Grande Valley’s proximity to the Gulf of Mexico, such storms are not uncommon. The last major hurricane in the region, Ike in 2008, was the costliest hurricane ever to hit Texas. Describing its aftermath, staff at a Hidalgo County nonprofit recalled that floodwaters from Ike remained for over a year. This emphasizes the importance of adequate stormwater systems. While hardscaping is expensive, there may be an opportunity to use creative softscaping to safely redirect pooling waters.

The overwhelming majority of colonias in the Lower Rio Grande Valley reside on severely flood-prone lands (USGS BEHI 2011). In even the lightest rainstorms, many colonias households flood, an issue compounded by the lack of stormwater systems. Figure 5 depicts the geography of flood vulnerability in the Lower Rio Grande Valley; the most vulnerable colonias are located east of McAllen, not coincidentally where the density of colonias is greatest. Additionally, vulnerability to flooding is dangerously exacerbated during hurricanes (Figure 5). CHIPS helps to determine which colonias are most vulnerable to violent storms. 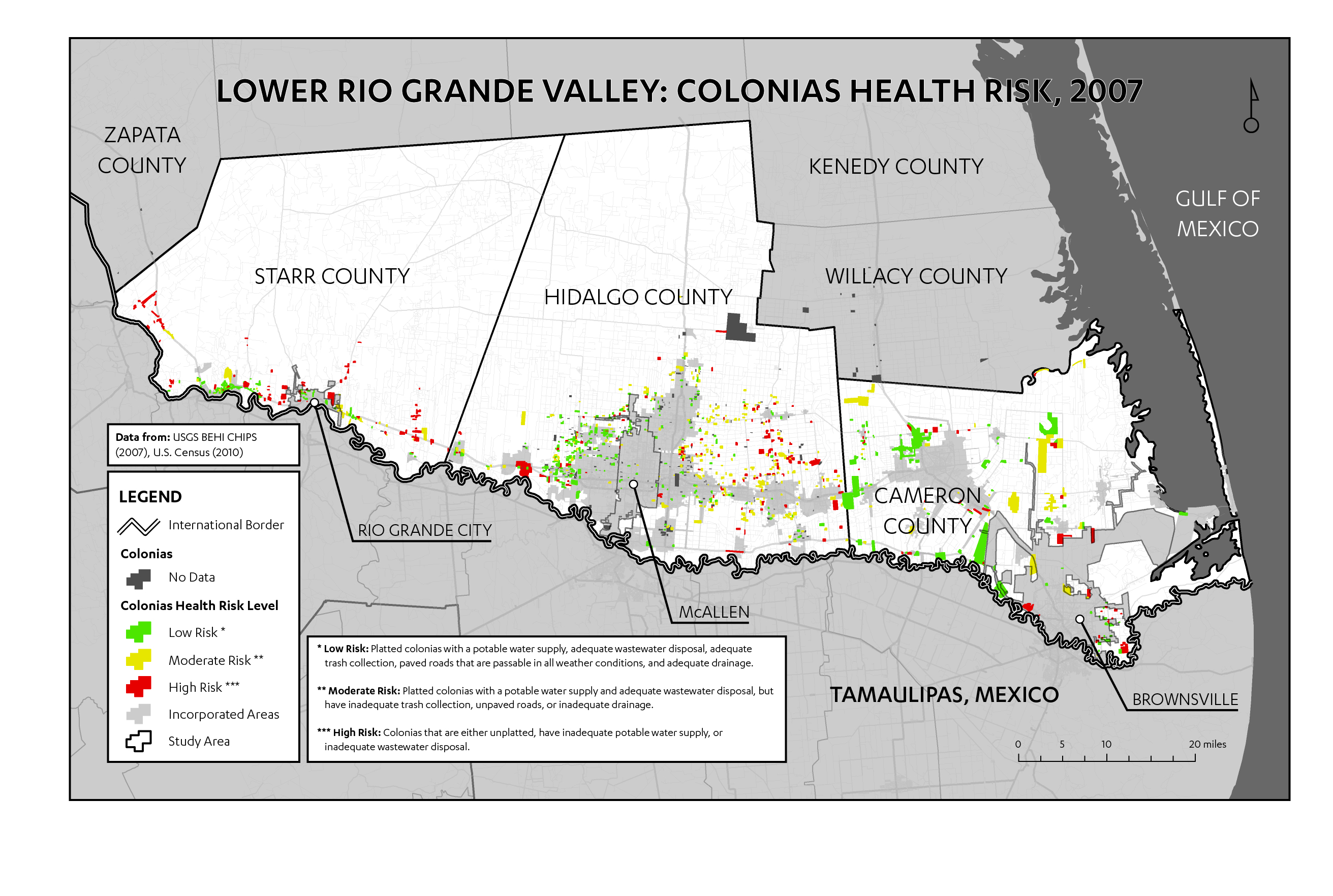 Figure 6: Map of health concerns in Lower Rio Grande Valley colonias (data from CHIPS 2007). “Health risk” represents the combined effects of several factors, including wastewater disposal (as indicated by the presence of cesspools), potable water supply, road surface, flood susceptibility by lot and roads, and whether lots have been legally subdivided (platted). While the colonias immediately west of McAllen appear to have low health risk, the rest of the region appears less homogenous, suggesting that services may be unevenly distributed. Nonprofit leaders note that such data sets do not factor in other environmental health risks, such as polluted lands and poor air quality.

The CHIPS data provide another useful metric of environmental impact in the colonias: public health risk. CHIPS categorizes colonias health risk along a three-category scale: low, moderate, and high, delineated in terms of their access to several basic services (Figure 6). This classification, while coarse, illustrates a useful point: the absence of these basic services has a compounding effect on the susceptibility of residents to diseases, often those typically associated with the third world, such as cholera and dengue fever (Williams 2001-2002: 709-711). Figures 7, 8, and 9 illustrate trends in the distribution of three of the services measured in “health risk”: trash collection, potable water, and wastewater disposal. While the CHIPS data suggest that the majority of colonias receive basic services, preliminary interviews with regional nonprofit leaders contradict this notion. For instance, a coalition of Hidalgo County nonprofits is currently lobbying for trash collection in colonias, a service that, according to CHIPS, the majority of colonias already have (Figure 10). While the nonprofits may be exaggerating the need for trash collection, such discrepancies, as well as the potential miscounts, have not been empirically examined. Therefore, it is difficult to determine whether CHIPS, the nonprofits, or both are incorrectly identifying the problem. 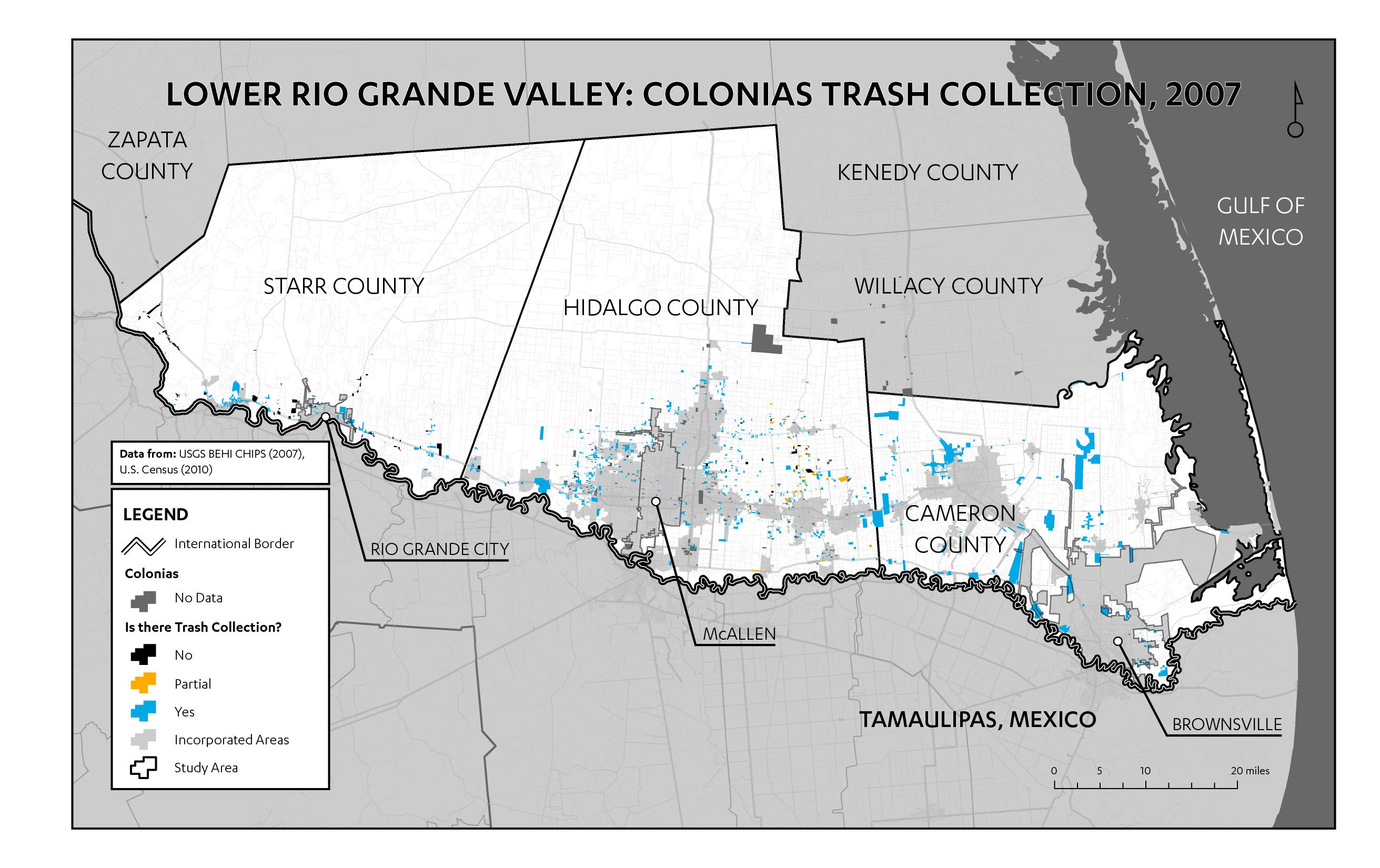 Figure 7: Map of trash collection access in Lower Rio Grande Valley colonias (data from CHIPS 2007). This map helps elucidate one of the clearest discrepancies between the CHIPS data and the experiences of those on the ground. According to this map, the majority of colonias appear to have adequate trash collection. However, the nonprofit leaders I interviewed reported that flooding and lack of trash collection (see Figure 6) are the largest issues facing colonias. This discrepancy may identify the issues facing omitted colonias in the CHIPS data, suggesting that these colonias may be the most at risk. If this is true, their omission positively biases the CHIPS data. 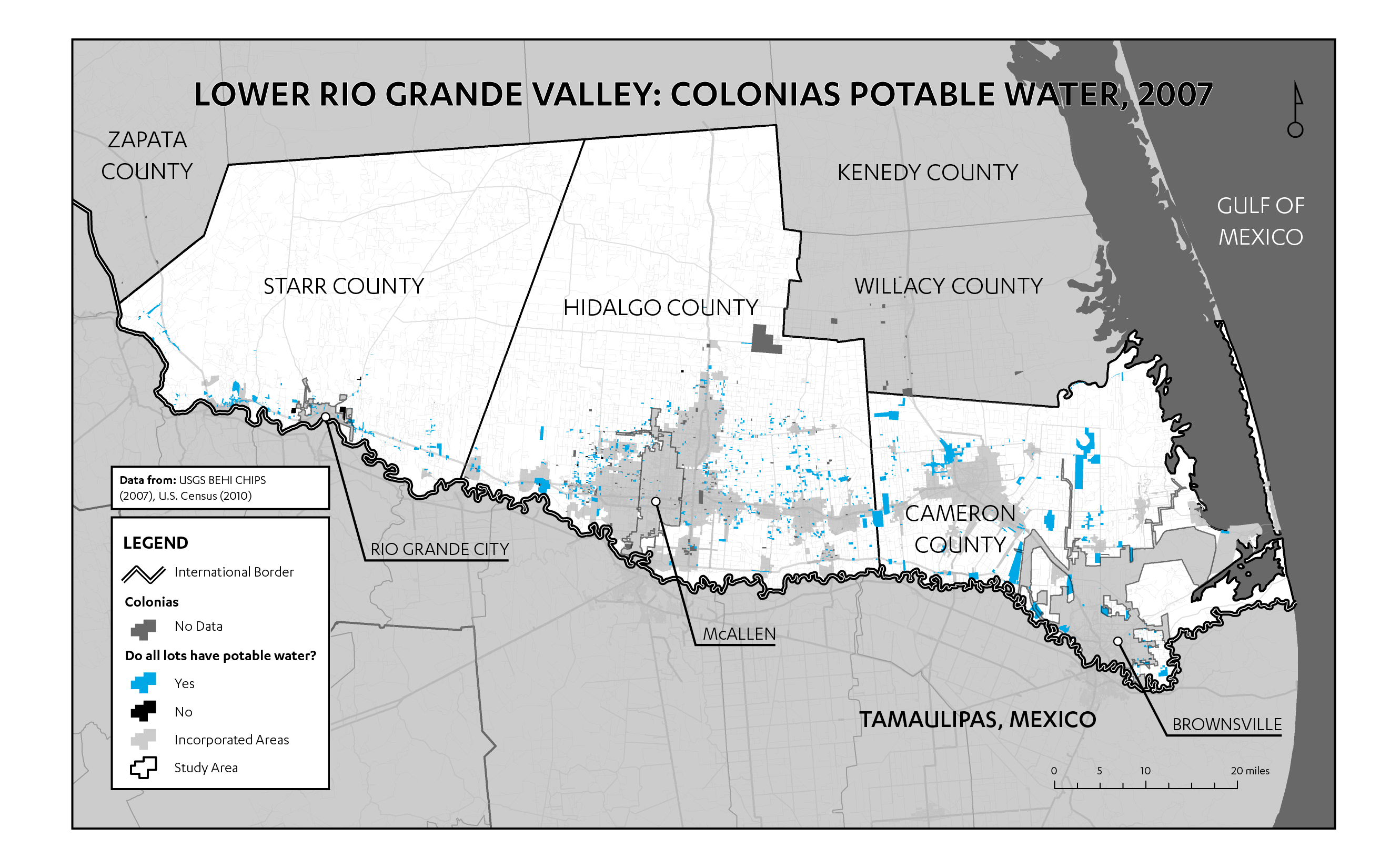 Figure 8: Map of potable water access in Lower Rio Grande Valley colonias (data from CHIPS 2007). One positive finding of the CHIPS data is that the majority of colonias have reliable potable water. Given the importance of water for survival, it is logical to assume that this would be the first service to reach colonias. But if many colonias are not captured in the CHIPS data set, it is possible that the unrecognized colonias are less likely than the recognized ones to have potable water. Most nonprofit leaders agreed, however, that potable water is no longer a pressing issue in colonias. 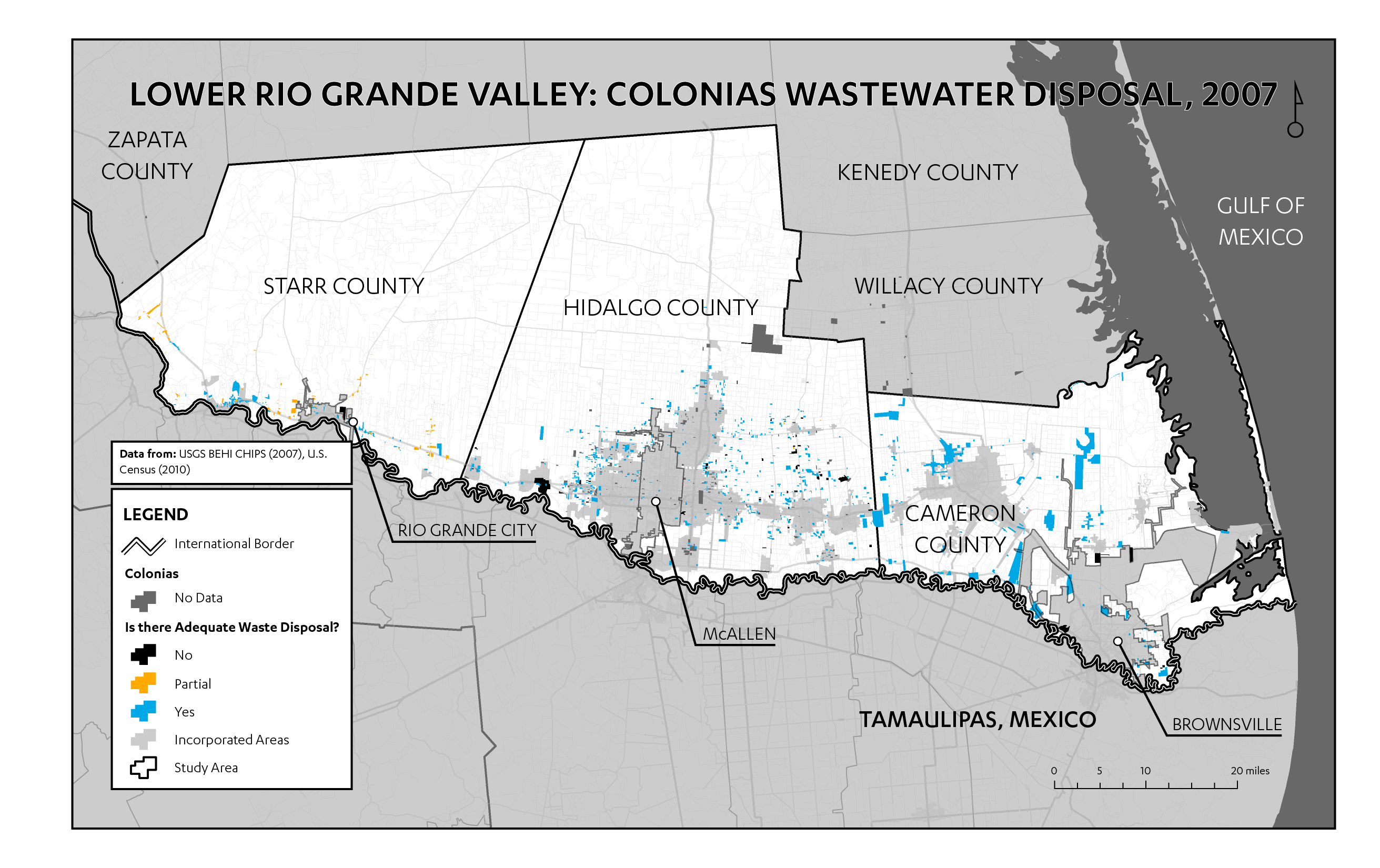 These observations reveal several shortcomings of CHIPS. First, CHIPS is meant to provide a measure of environmental health, but it does not discuss built environment issues. Nonprofit leaders noted a divide between their own focus on housing and the government’s focus on utilities, a divide that may reflect a view of housing as private and utilities as public. This public/private view results in a dearth of public data on the built environment. However, built environment characteristics affect health outcomes and constitute a core component of environmental health (Northridge, Sclar, and Biswas 2003; Srinivasan, O’Fallon, and Dearry 2003). In response to this shortcoming, I suggest that CHIPS data be updated yet again for the 2010s to include new metrics surveying housing quality and the built environment.

Second, undercounts of colonias population and settlement (outlined above) have real effects. For instance, the U.S. Census has consistently undercounted population in the colonias, which has resulted in inadequate funding and representation for poor, high-colonias counties (MacLaggan 2013). The federal definition of “colonia” leads to similar miscounts in CHIPS, which masks the need for basic services funding and impugns the accuracy of the data set. To remedy this issue, the federal definition of “colonia” should be revisited, especially given the number of omitted settlements and the possibility that the omitted colonias have the greatest need. This conclusion is not inconsistent with existing literature, as others have made similar policy recommendations (Mukhija and Monkkonen 2007). Our knowledge about colonias comes from outdated data sets and definitions; thus, we need rigorous research that examines the conditions and needs of today’s contemporary colonias.

Figure 10: Graphs of CHIPS data analysis (data from CHIPS 2007). These final charts provide a numerical overview of the CHIPS data to complement the visual analysis above.