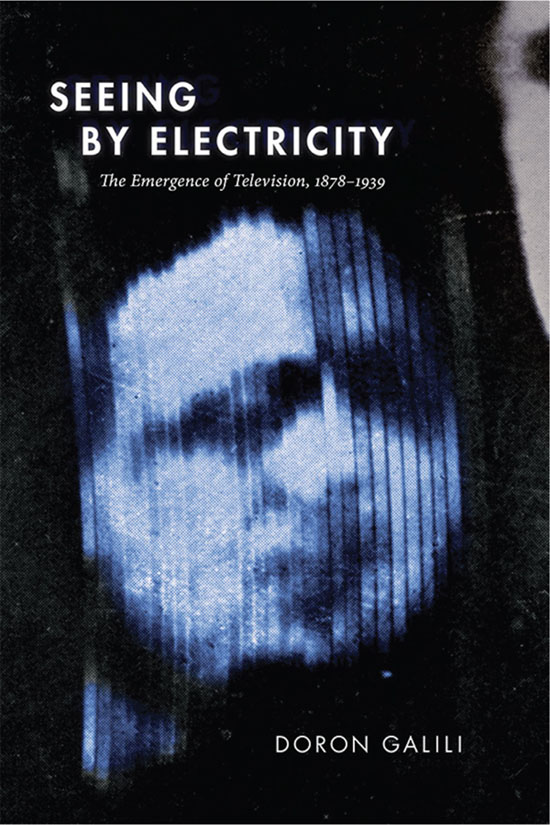 In Seeing by Electricity: The Emergence of Television, 1878–1939, Doron Galili provides a study of the development of television—or as it is more generally described, moving image transmission technology—that considers not just the medium’s technological birth but also the cultural, economic, industrial, and political foundations that influenced, informed, and constructed television. Seeing by Electricity focuses on the period of television history that preceded the medium’s mass implementation and is divided into two parts. Part 1, “Archaeologies of Media Image Transmissions,” covers what Galili calls the “speculative era” of the late 1870s to the mid-1920s; Part 2, “Debating the Specificity of Television, On- and Off-Screen,” moves into television’s “experimental era” of the 1920s and 1930s.

Chapter 1 lays the foundation for an intermedial and interdisciplinary study of television’s development by pointing to mid-to-late nineteenth-century ideas that viewed moving image transmissions as an extension of other media.[2] Galili’s survey of newspaper articles, trade journals, and science fiction writings of the time pinpoints two major aspects of the anticipatory discourse surrounding television, both of which stemmed from teletechnology: the annihilation of space and time, and the configuration of networks.[3] In this chapter, Galili also begins to tie television together with cinema, pointing to the idea that at the time, both media offered alternative ways to visually experience modernization.[4]

In chapter 2, Galili contextualizes television’s early history within the visual cultures and conceptions of vision in late-nineteenth century United States and Western Europe. Galili places television into the larger historical physiological discussions of embodied sensations, noting that these discourses often perceived the body’s visual receptors as electrical signal communications systems.[5] Galili notes that modern theorists would translate these corporal systems to those of moving image transmission, with television being conceived of as a means to replicate, extend, enhance, or even replace the human body’s own systems of visual communication.[6]

Chapter 3 reinforces Galili’s argument as to why we should take an intermedial approach to the history of television. By using a media-archaeological approach, Galili holds that television and cinema had a symbiotic relationship dating back to the development of moving image transmissions and that if we look at cinema and television as a set of materials and cultural practices, we can see moments of hybridization and overlap between the two media.[7] Galili also notes the shifting discourses that reframed television and its relationship with telegraphy and other teletechnology; these observations both assist our study of the new medium’s development and act as commentary on the American and Western European media landscape of the late nineteenth and early twentieth centuries.[8]

Chapter 4 marks the beginning of the book’s second part, which shifts from television’s conceptual and speculative period of the 1870s–1910s to its more experimental era of the 1920s–1930s. Galili focuses on three major aspects of television’s development that informed and molded the new medium: first, that full-fledged experiments with television apparatuses started some five decades after the initial conceptions of moving image transmissions and were carried out in a mediascape that was vastly different than the one in which television was initially conceived; second, that television’s characteristic traits were established largely before mass deployment of the medium; and third, that television broadcasting was subject to governmental regulation from the outset, which limited the scope of experimentation and politicized the new medium.[9] Galili also uses chapter 4 to describe the tridirectional relationship between radio, television, and film and emphasizes the importance of studying not just television’s technological development but also the history of the medium’s institutionalization and its evolving cultural functions and social meanings.[10] In this vein, Galili traces the development of television’s specific traits, such as liveness and immediacy, and shows how the cultural functions and economic interests of cinema and radio worked to influence these traits and establish intermedia relationships.[11]

Chapters 5 and 6 place television into the context of international film history and theory. In chapter 5, Galili uses Soviet filmmaker Dziga Vertov’s relationship with moving image transmission technology as a specific example of television’s potential to help realize revolutionary objectives that were not fulfilled by film, including instantaneous temporality and a networked audiovisual communication.[12] Chapter 6 discusses the approaches film theorists, namely German writer Rudolf Arnheim, took to television in the 1920s and 1930s. Galili’s focus on Arnheim includes not just the theorist’s own perceptions of and concerns over television but also serves as a starting point for a larger discussion on the more recent theoretical discourses surrounding media convergence and changes in the media landscape.[13]

In the book’s introduction, Galili notes how many histories of television that cover the 1870s through the 1920s are largely based on the medium’s technological development, which has led to the construction of a historical canon that can be intellectually inaccessible or lacks theorization or critique. Seeing by Electricity expands this canon to include an interdisciplinary and intermedial study of television’s development that is enlightening, thought-provoking, and easy-to-read. I especially applaud Galili’s work in the book’s third and fourth chapters, which include a perspective on the shifting discourses surrounding the American film and radio industries’ approaches to and conceptions of television during the 1920s and 1930s. These chapters in particular display Galili’s application of both contemporary and historical materials to expand narratives, which includes the examination of industrial contexts that shaped the creation of the medium, rather than studying the development of television in a vacuum.

The consideration of contexts that include industrial studies, film theory, and even physiology renders the project versatile enough to be of interest to scholars outside the field of television history. While the book’s final two chapters accentuate film history and film theory, with television perhaps being rendered as a secondary figure as a result, Galili still circles back to ensure the project provides context for and fleshes out narratives surrounding the historical ponderings of television. On the whole, Seeing by Electricity offers its reader a nuanced and digestible consideration of the forces, entities, and contexts that shaped the conception, development, and perception of television in the United States and Europe from the late 1870s until the late 1930s.