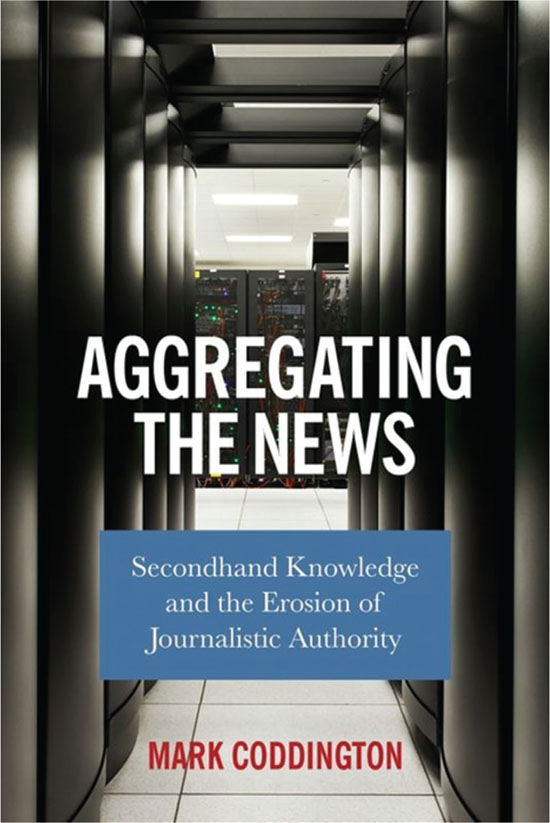 These days, a lot of the news we read online has been prepared not by traditionally defined journalists but by aggregators—groups of pseudo-journalists who repackage, summarize, combine, organize, and “spice up” traditional news reports before judiciously selecting headlines aimed at landing those aggregated reports in your Facebook feed, Twitter stream, or some other place where you will notice and click through. Even though aggregation is an increasingly important form of production responsible for much of the news content consumed today, scholars still do not know much about it. That’s where Mark Coddington’s book, Aggregating the News: Secondhand Knowledge and the Erosion of Journalistic Authority, comes in.

Coddington uses interviews paired with participant observation at several US news aggregation organizations to unpack the roles and routines of aggregation work. His approach lumps aggregators together, drawing out similarities rather than explicating differences; as a result, it feels like there are some missing pieces, especially in how aggregators think of themselves and how their perceptions might change based on their organization. His field sites are all in the United States, so the book is limited to an American perspective (which Coddington acknowledges early in the book). As a result, the book contributes an important perspective to the field of journalism studies while also reinforcing the US-centric nature of the field.

The book primarily discusses the motivations and self-perceptions that drive aggregators’ work, although Coddington also provides a glimpse at aggregators’ work routines. The work of aggregation, he shows, primarily consists of “gathering evidence of evidence,” repackaging already-reported reports into a sort of overarching summary of a news item, aiming to “add value” to the report generally without doing much primary reporting. Chapters 1 and 2 describe this work process, first comparing aggregation to reporting from a theoretical perspective and then showing how aggregation works in practice at several organizations. Coddington argues that aggregation is a “secondary form of newswork, something scaffolded on top of reporting practices but marked by a distance from its sources in a way that it struggles to overcome.”[2] The techniques of the work—which revolve around identifying and compiling reported journalistic accounts quickly and in a way that is attention-grabbing and shareable—situate aggregation as a secondary news process, limiting aggregators’ ability to claim authority for themselves.

Aggregators’ credibility and authority come not from their own firsthand knowledge but from the credibility and accuracy of other journalists who conducted firsthand reporting to write the stories that are being aggregated. In chapters 3 and 4, Coddington focuses explicitly on the ways that aggregators strive for and achieve authority as journalists, both in their professional communities and with their audiences. Chapter 3 explores the relationship between aggregators and other members of the journalistic profession in detail. Even good aggregators are second-class in the journalism world—“nobody graduates from journalism school and wants to do aggregation,” one source tells Coddington.[3] To compensate for this feeling of inferiority, aggregators rely on a set of ethical standards to assess the quality of their own work and define their role in the journalism profession. These principles—attribution, excerpting, and adding value—are how aggregators attempt to define and claim a professional identity within the journalism field. Chapter 4 situates aggregators in relationship with their audiences. The audience is fundamentally important to aggregation work, in that aggregators are motivated by pageviews and other metrics signaling audience interest. However, aggregators primarily define their audiences in terms of analytics and quantitative measures, which results in a narrow understanding of audience as consumers, not citizens or publics—a view that leads to clickbait-adjacent news packages and dismissal of audiences.

In chapter 5, Coddington explores some of the ways that aggregation, despite its second-class status in the journalism field, might push journalism forward in useful ways. He focuses on the case of Circa, an aggregation organization that closed down shortly after his fieldwork, suggesting that their model of fitting individual events and updates into a bigger story has value for the rest of journalism. In particular, Circa pushed its employees to think of individual news updates as parts of a larger story arc, contributing to an integrated vision of news that is uncommon in traditional journalism, but useful.

The book’s overarching argument is that aggregators operate at the fringes of traditional journalism and thus are constantly fighting and arguing for their professional legitimacy, primarily through claims to authority. In developing this argument, the book builds on an ongoing scholarly discussion of journalistic authority: What is it? Where does it come from? Who has it, and why? Coddington builds on a discussion of authority as a discursively constructed attribute that journalists gain or lose by virtue of their relationships with audiences, sources, and other parties. (For more on this approach, see Matt Carlson’s 2017 book, Journalistic Authority: Legitimating News in the Digital Era.)

Aggregating the News is well written and informative; it would be a valuable resource for graduate students and scholars who want to understand how specific journalistic actors work and contribute to the journalism field. While the author’s perspective is empirical and the journalism studies audience he writes to is fairly positivistic, he includes some notes throughout that signal his awareness of his own positionality in the field as a qualitative researcher who relies on observations and interview data. In addition, this book deepens and extends a discussion about how journalistic authority is something that is granted and gained, relationally constructed in how journalists interact with each other, their sources, and their audiences.

The book sidesteps a few questions that future scholarship could explore. For example, given all these downsides and challenges, why does aggregation exist at all? Both on an individual level and on an organizational level, what drives the practice of aggregation and why do individuals, often trained as traditional journalists, choose to do this instead of working at a more respectable journalism job? And how does the work of aggregation look outside the United States? The book is rich enough as it is without addressing these questions, but future research could take on some of these topics.