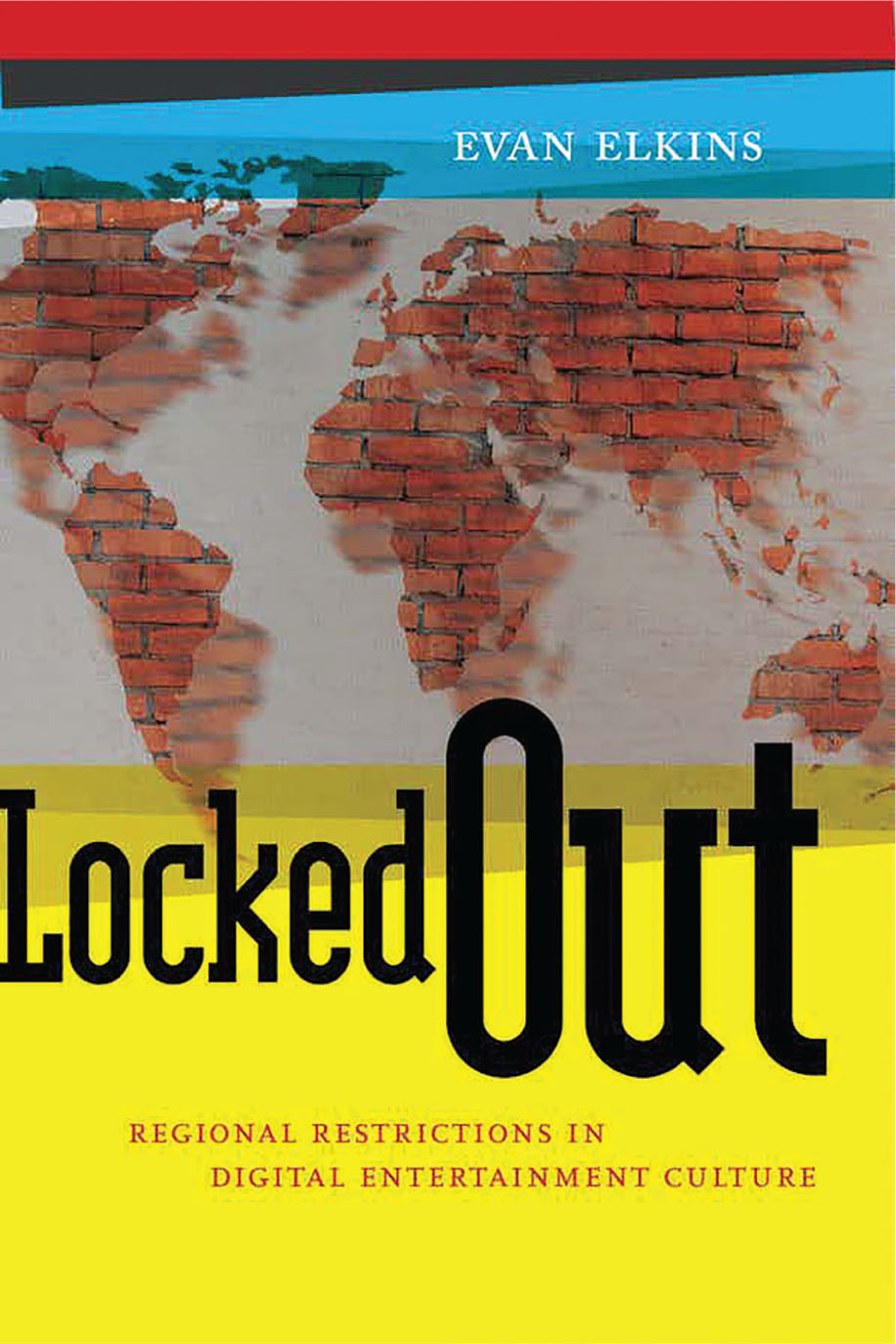 At a time when most people expect access to media content to be ubiquitously accessible, there are a large number of places where this is not the case. When we encounter a “this content is not available in your location” message, we come face-to-face with regional lockout: mechanisms intended to control geographic access to media. In Locked Out, Evan Elkins looks to the last three decades of regional restriction to argue that “regional lockout has shaped global media culture” through three interconnecting ways: as regulation of technology, as a distribution mechanism, and as a means of “geocultural discrimination.”[2] Elkins’ analysis looks at the institutional lockout decisions at scale, as well as the impact these restrictions have on local consumers. Ultimately, Locked Out tells the story of “how a technology of media distribution . . . gets taken up as a mechanism of geocultural difference.”[3]

Locked Out’s organization reinforces that this is not a history of the phenomenon of regional lockout. Rather than moving chronologically, the chapters move from the material objects of the DVD and the game console to the “less-obviously physical”[4] sphere of video-on-demand (VOD) and music streaming platforms. After focusing on different examples of regional lockout, chapter 5 turns toward the people and communities navigating access through region-free media.

Locked Out relies primarily on critical discourse analysis of a range of objects. These include trade and popular press articles, regulatory reports and documents, online comments and other digital spaces, and more. Chapters 1 through 4 in particular utilize this approach. Chapter 5 provides first-hand accounts of people responding to regional lockout through region-free media in diasporic communities from the Global South to the American Midwest and New York City. Elkins interviews workers in DVD shops and media marketplaces in these cities, which provides an “on-the-ground” perspective to the more bird’s-eye view presented in the previous chapters. These stories add richness to an already impressive analysis of regional lockout.

Elkins quickly puts aside the staid dichotomy of critical-cultural and political economy approaches to the study of media industries, and instead engages both arenas to paint a more nuanced picture of how regional lockout shapes global media culture. A key strength of Elkins’ analysis is that it extends beyond a retelling of industrial and regulatory factors that produce regional lockout or an account of the business and personal impacts of this process. By understanding regional lockout as a cultural force, Elkins is able to attend to issues of power. He brings culture into the conversation about regulation and technological specification. A strong example of this occurs in chapter 1. While this chapter looks at the regulatory and legal moves that brought about DVD region codes, it gives as much attention to how the region code functions representationally and discursively to make sense of location, territories, places, and markets. By divvying the world up into numbered regions, and making North America number one, region codes reinscribe Western hierarchies of power and status.

Another strength of Elkins’ analysis is his willingness to give space to the messiness and complexity of regional lockout. Instead of reinscribing “binaries of good/bad and just/unjust, we might consider the complex ways regional lockout creates certain conditions of media access and use.”[5] Chapter 3 resists these binaries through examining the case of BBC iPlayer and the way its restriction outside the United Kingdom was welcomed by some British people as an expression of national and regional pride and identity. Also, in chapter 4’s comparison of Spotify and Pandora, the “geoblocking is bad and unfettered access is good” argument is complicated by Elkins’ attention to discourse on royalty payments and licensing agreements to ensure that artists are compensated fairly for their work.[6] Again, Elkins shows the nuance and complexity of regional lockout and how it is not as simple as restriction being “bad.”

Similarly, rather than characterizing regional lockout as only ever restrictive, Elkins emphasizes the productive possibilities of this process. In other words, regional lockout produces things: flows and friction, (sub)cultures, differential access, resource allocation, power differences, and, ultimately, geocultural capital. For example, chapter 2 demonstrates how regional lockout helps produce gamer identity and culture[7] through a knowledge of gaming consoles and access. Chapter 5 demonstrates how the push and pull of regional lockout and its circumvention produces and shapes hierarchies of taste and fandom in both diasporic communities and transnational cinephilia.[8] Elkins is careful, however, not to make a technologically determinist argument; instead, he emphasizes how the phenomenon of regional lockout “shapes” rather than “determines” distribution, access, and power, and therefore global media culture.

What is at stake even more broadly in Elkins’ work is the question of what media (and exposure to it) has the power to do. Instead of viewing media content as a product to be consumed and profited from, Elkins suggests we should see “media as resources” through which we can encounter and be exposed to difference. From this standpoint, efforts to push back against regional restriction should resist an “open-internet” argument and instead be framed as access to difference.

The main limitation of Locked Out is one of scope: Large parts—regions—of the world are underexplored. There is limited engagement with Africa, East Asia, and Central and South America. However, Elkins does point to other scholarship that takes up these regions. Highly accessible, Locked Out would be a generative text in both undergraduate and graduate courses on digital media, media industries, transnational and global media, and cultural geography, as well as for scholars in these fields.