Media industries studies researchers engaged in a literature review may begin in a variety of places, depending on the scope of their work and the questions about the industry they are pursuing. Beyond monographs and large interdisciplinary full-text resources such as JSTOR and Project Muse, likely database sources might include discipline-specific sources such as Performing Arts Periodicals Database (ProQuest), International Index to Film Periodicals (ProQuest), or Film & Television Literature Index (EBSCO). Although these sources certainly contain articles from scholarly journals, popular magazines, and major trade publications, they are still heavily weighted toward scholarly film studies literature, which focuses on representation, critical theory, and film and television history.

Thanks to major digitization efforts like the open access Media History Digital Library and the Entertainment Industry Magazine Archive (ProQuest),[2] media historians increasingly enjoy online cover-to-cover access to twentieth-century media industries trade publications that provide searchable access to historic content. However, contemporary media industries research requires more in-depth coverage of trade publications than is typically provided by the film and television databases mentioned above. To access this content, media industries scholars should look to resources outside of the discipline and augment their research with resources that are branded as business, industry, and legal research databases. These tools often include articles and reports on media industries subfields such as marketing, management, sales, distribution, and exhibition that are not adequately covered by “film studies” subject databases. Numerous useful databases exist in this category, with differing scopes, including NexisUni and Factiva; ABI/INFORM (ProQuest) and Business Source (EBSCO) are two of the most popular and most comparable in terms of size and scope.

Referring to ABI/INFORM and Business Source as two products is deceptive, because both are available with different tiers, pricing levels, and add-on content modules that alter the resource’s scope dramatically. The ABI/INFORM Collection currently includes three possible modules: ABI/INFORM Global, ABI/INFORM Trade and Industry, and ABI/INFORM Dateline. ABI/INFORM Global is the core database that offers full text of both scholarly and trade periodicals, market and industry reports, as well as nonperiodical content like dissertations and working papers. The “Trade and Industry” package is more focused on coverage of specific companies, products, and industries, whereas “Dateline” contains regional and local company and market news published in dailies, wire services, and area business periodicals.

EBSCO’s Business Source is built around different tiers, with increasing numbers of indexed periodicals at each level. The tiers are “Elite,” “Premier,” “Complete,” and “Ultimate.” There are also “Alumni” and “Main” tiers. Although each of these databases looks the same on the EBSCOhost platform, the amount of content included varies significantly. For instance, Business Source Elite includes 580 full-text periodicals (349 of which are peer-reviewed journals), whereas Business Source Ultimate includes 3,284 full-text journals and magazines (with 2,034 peer-reviewed journals). EBSCO also sells Business Periodicals Index Retrospective: 1913–1982 separately; this is an index-only tool based on the former H. W. Wilson print bibliography. ABI/INFORM Global, by contrast, comes preloaded with ABI/INFORM Archive, which contains older, mostly twentieth-century content; the inclusion of historical material is an advantage for researchers seeking combined searchability of both old and new industry information. Much of this older content has been derived from microfilm, however, and scanning quality varies. Although it is only an article index, Business Periodicals Index Retrospective contains a wide breadth of periodical titles that do not always overlap with ABI/INFORM Archive.

While some academic libraries hold subscriptions to both ABI/INFORM and Business Source, many institutions must choose one due to cost and content overlap. These resources do overlap somewhat, but also offer complementary coverage of similar topics from different sources. Researchers must consider which database to use, especially which version of either database, in light of overlapping and interlocking coverage with other available resources. For instance, ABI/INFORM includes dissertations and Wall Street Journal, whereas Business Source does not. This is not a problem for institutions with current Dissertations and Theses Global and Wall Street Journal subscriptions, since users will already have access to these resources.

Neither product is invested in creating an online collection of cover-to-cover scanned pages of the type seen in Media History Digital Library. These are essentially aggregator databases that bring together articles, reports, and other content from different publishers, often in bare-bones full-text format, not PDFs that include images. They do not include advertisements, and can involve “moving walls” for individual titles, meaning that there will be a delay in the most recent content being added. Date coverage can also change depending on publisher agreements, which makes both products less stable than a digitized periodical backfile. Both ProQuest and EBSCO offer periodical archives as separate products that provide higher quality, more stable access to individual titles. For instance, Business Source includes Forbes magazine from 1990 to present in a mixture of text-only and PDF articles; however, EBSCO also sells the Forbes Magazine Archive, which contains PDFs of the entire magazine 1917–2000. As both products run on the same EBSCOhost platform, researchers with access to both can easily cross-search them. ProQuest most notably sells Entertainment Industry Magazine Archive, which includes the backfile of Hollywood Reporter. That content is not available in ABI/INFORM, however, even though it is also a ProQuest product.

In terms of searchability, both ABI/INFORM and Business Source allow specialized field searching, including searches by company name, NAICS/Industry Code, and product name, as well as a number of business-related publication types like SWOT (Strengths, Weaknesses, Opportunities, and Threats) analysis and industry report. These fields can help narrow down information on broad topics, but searches of the two databases revealed some major differences in retrieval, depending on the specific combination of products used. A search in the “Company” field for “Disney” in Business Source Complete resulted in 11,547 records, the majority of which were trade and magazine articles, followed by newspapers, industry profiles, academic journals, market research reports, and SWOT analyses (see Figure 1). By contrast, the same “Company” field search in ABI/INFORM Complete yielded more than 66,000 records, which included a similar number of academic journal articles to the Business Source Complete result set (see Figure 2). The main difference in the ABI/INFORM Complete result set was a massive number of articles from wire feeds (36,724), followed by trade journals, newspapers, reports, blogs, podcasts, and websites. Further analysis showed that the overwhelming majority of the wire feed results came from ABI/INFORM Dateline and ABI/INFORM Trade and Industry. When ABI/INFORM Global was searched alone, the results overall were much more similar in type and quantity to Business Source Complete (a total of 12,245, but still with far more newspaper content). Additional searches yielded similar results, in that ABI/INFORM, both Collection and Global, usually brought up more hits overall than any Business Source product. This was largely due to the inclusion of more newspaper and newswire content, along with blogs, wire feeds, and other web content. Business Source is more focused on academic and trade publications and reports, and uses more nuanced source type categories, including industry profiles, product reviews, market research reports, and SWOT analyses. By contrast, ABI/INFORM has fewer categories for more content, including one category for reports, and a category that is vaguely called “Other Sources.” 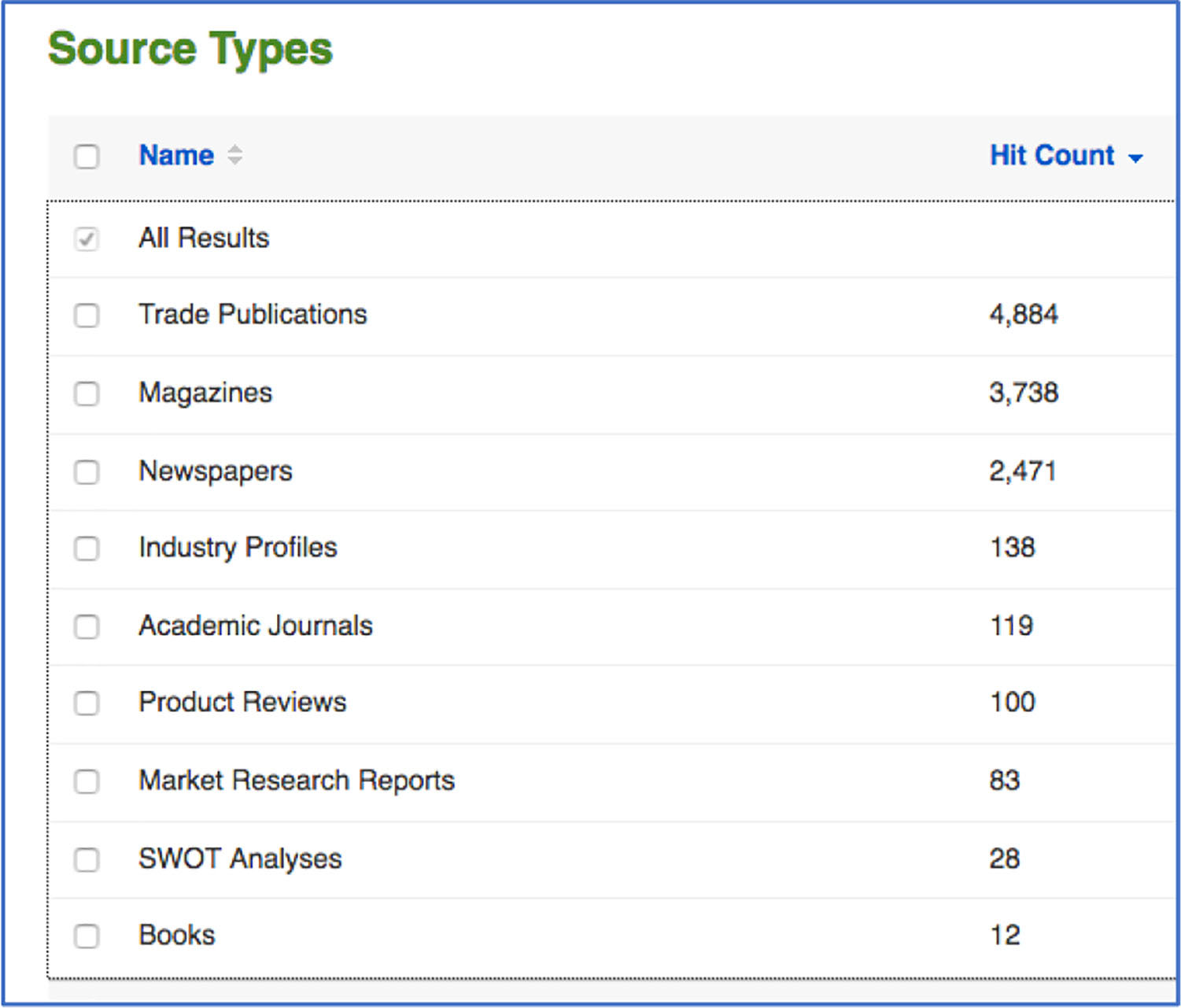 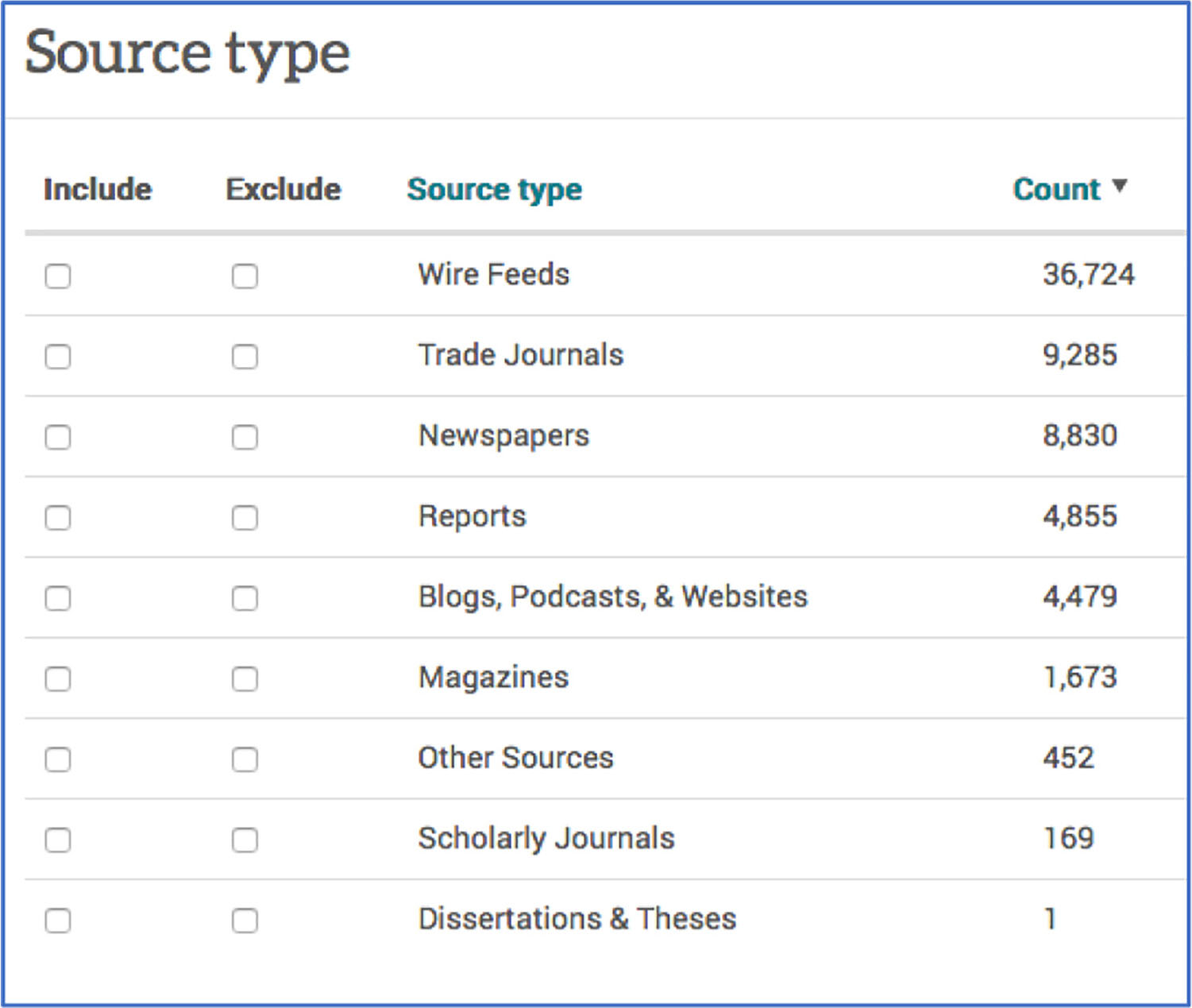 Search defaults are another major difference between the ProQuest and EBSCO products. While ProQuest’s platform automatically conducts a full-text search when content is available, if a user runs a search without selecting a specific field in the EBSCO platform, the platform defaults to a non-full-text search that only searches within metadata fields such as subject headings and abstracts. A researcher can select “All text” to conduct a full-text search, and libraries can ask EBSCO to make this the default setting, if users prefer it. These simple, if overlooked, differences can have a major impact on search results: For example, a search using Business Source’s default settings for “streaming media” resulted in about 50 percent fewer hits than a search using the all-text search setting. However, the possible advantage of the non-full-text search may lie in getting more relevant search results, especially in cases where the search is conceptual and/or very general.

While a larger result set may sound better than a smaller one, weeding out less relevant content presents its own kind of challenge. In this regard, Business Source offers more robust and more visible options for conducting controlled subject term searches, thanks to an expansive built-in thesaurus that includes specific names and broad subject terms that occasionally mirror Library of Congress headings (for instance, “motion picture industry—China”). Using these subject terms can make a big difference in retrieval. For example, searching “motion picture distribution” as a subject heading in Business Source resulted in far more relevant results than a basic keyword search for “film distribution.” A note of caution, however: A few subject entries demonstrate the bemusing limits of machine-driven indexing. A 2019 article entitled “Disney+ Outages Give the Mouse a Black Eye as Service Rolls Out” contained subject headings for “streaming technology,” “mice,” and “eye!” (see Figure 3).

ABI/INFORM, by contrast, does contain a thesaurus but relies more heavily on full-text searching, and many of the database records for news articles do not contain any subject headings whatsoever. This is due to the fact that the components of ABI/INFORM are not all derived from the same set of content; therefore, metadata within records has varying levels of detail and robustness. Subject headings that are included with articles are not visible until a user clicks on a specific record.

Ultimately, I found that while both databases offer useful content related to media industries studies, these databases are mostly complementary rather than heavily duplicative. Search trials conducted with exactly the same conditions in both databases retrieved articles from very different publications. When scholars have access to both options, it is beneficial to use ABI/INFORM and Business Source in concert with, rather than as substitutes for, one another. ABI/INFORM offers more news-based content, some of which will be duplicated in other online resources. For searches related to the media industries, Business Source has more consistent subject indexing and retrieves more industry-specific reports, but has less overall content, especially with regard to historical material, than the full suite of ABI/INFORM Collection. In summary, both resources provide a rich source of information related to management, marketing, and business that goes beyond the handful of trade publications commonly included in film/media-specific databases used by cinema studies researchers. With this in mind, Business Source and ABI/INFORM are valuable additions to the media industries scholar’s research toolkit.