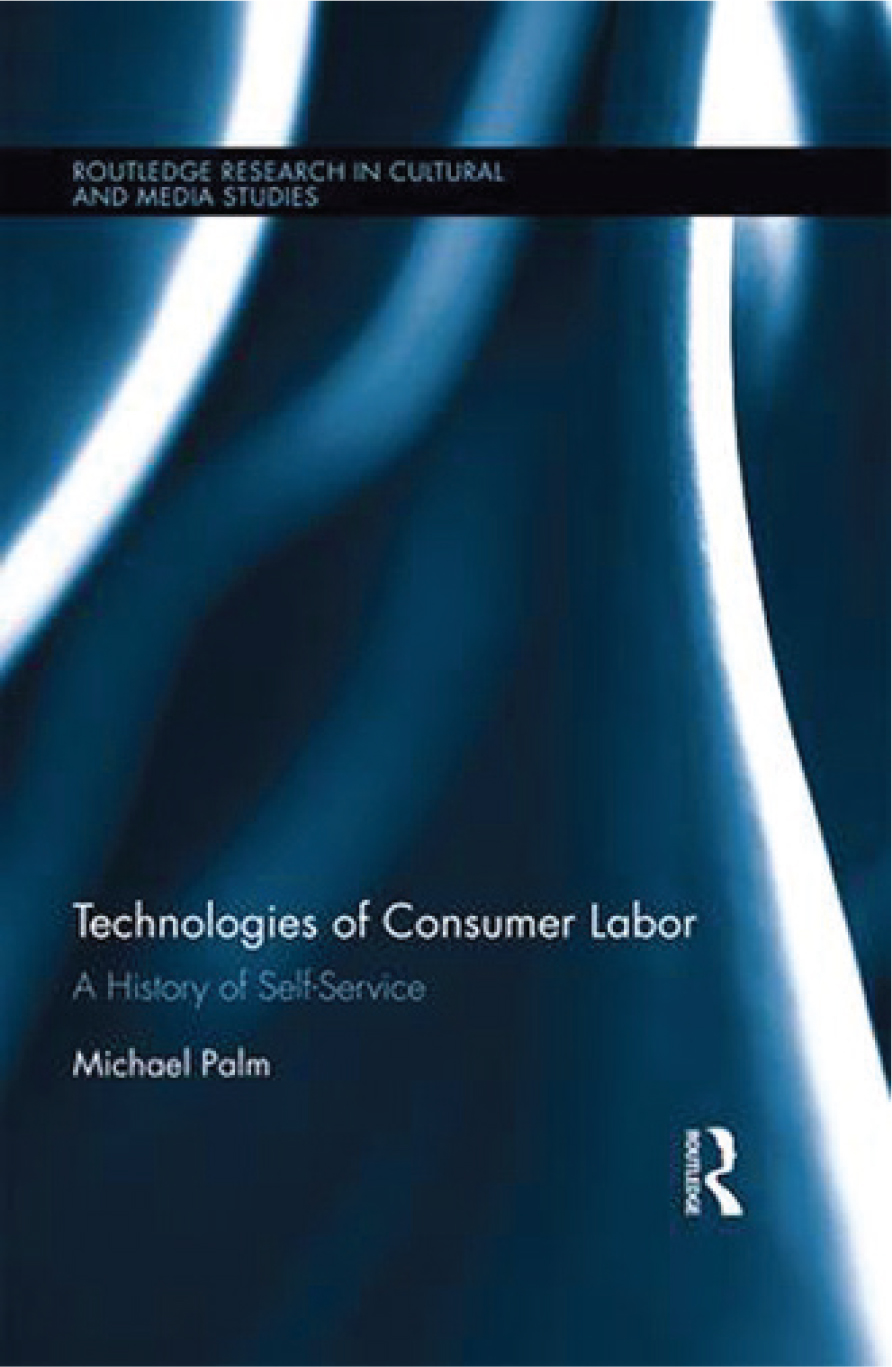 There just aren’t enough scholarly books about the telephone—at least, not to the extent of comparable sorts of media technologies. Part of the problem, perhaps, is that most telephone books are about the history of the telephone as such, not (with exceptions like Claude Fischer’s America Calling or Ithiel de Sola Pool’s The Social Impact of the Telephone) what goes on with it. The telephone, unlike supposedly more expansive media technologies like books, film, and television, simply doesn’t have “content” in the familiar sense. So, while it might be fair to say that there are just as many books about the history of the telephone as there are the history of television, writers have found plenty to say about the particulars of its programming, rather than just the technical (or social) underpinning of the device itself.

Michael Palm’s Technologies of Consumer Labor: A History of Self-Service offers a new argument for the importance of the telephone to media and communication studies. It is the telephone, not the television, Palm argues, “that was the triumphant consumer technology of the century”. After all, when Bell’s Western Electric rolled out rotary dialing in 1919, there were more Americans with telephones than automobiles, and twice as many telephones as radios. What’s more, alongside “clocks and calculators,” the telephone was one of the first consumer technologies (and the first media technology) to undergo digitization. But perhaps Palm’s most valuable contribution here is not in merely reaffirming the importance of the telephone to the twentieth century, but in reminding us of its history as a medium open to unexplored and often unexpected kinds of content. Palm, an Associate Professor in the Department of Communication at UNC-Chapel Hill, doesn’t just reiterate the telephone’s place in social life, his argument carves out new connections between traditional telephone scholarship and areas of social and technical influence that resonate in contemporary debates about automatization and digital life—explaining, in other words, how these machines came to do many of the things that we used to do ourselves.

While the title is absent of this central interest, the telephone, and the operative logic of dialing the telephone, with all of its attendant cultural conditions, performative protocols, and technological requirements, is what drives Palm’s account of the transformation of consumer labor. It is what explains, as he puts it, “how self-service became second nature.” The telephone’s dial is accompanied by the machinery of automation, the touch-tone keypad, and the designs of digitization. At the end of the narrative, it is the touchscreen that, for the vast majority of consumer operations, has brought the real results of computerization to consumer life. Drawing from Jennifer Daryl Slack and J. Macgregor Wise’s Technology and Culture, Palm leverages the idea of the “technological assemblage” to argue that technologies are not comprised only of pieces of other technologies but also of cultural conditions and social practices. Combining historical, political-economic, and cultural analysis, Palm interweaves close readings of corporate film, how-to manuals, and business history—along with legal cases and accounts from popular culture—as he documents consumer labor conducted via telephone (and “other machines” with keypad interfaces) and reveals the “habits, attitudes, and ideas” that allowed the distribution of telephonic self-service to spread throughout the media, retail, and financial industries.

In addition to the telephone, several other “technologies of consumer labor” form the book’s four main cases—along with the introduction and the volume’s brief conclusion. Here, Palm explores entries as diverse as cash registers, vending machines, and ATMs, highlighting the progression of consumer technology from “shopping carts to smart phones.” While Palm argues that these changes were often accompanied by promises of freedom, privacy, and autonomy, he also demonstrates the ways in which professional labor was redistributed to consumers and new kinds of workers: a process of routinization that foreshadows contemporary concerns about automation. Complex entanglements between deskilled, and correspondingly enskilled humans and nonhumans position the technologies of consumer labor as both means and ends for new patterns of consumptive operation.

Palm opens his first chapter amid the transformation of the consumer shopping experience. As he points out, “self” was first conjoined to “service” in the promotion of a new type of discount grocery store. In order to suture his discussion of the telephone to self-service as a concept, Palm outlines the managerial and technological processes that accompanied the moment when “consumers grew accustomed to serving themselves,” following “how-to” manuals written for self-service merchants in the 1940s and 1950s along with social histories of shopping.

The telephone occupies the central two chapters, as the argument moves from the cash register’s “ring” to the telephone’s more traditionally communicative call. Evoking the Kittlerian slippage from secretary to typewriter, Palm describes the attachments that accompanied the replacement of the accommodating “hello girl” with the routinized “voice with a smile” that was the hallmark of Bell’s modern, efficient, service. In the cultural milieu of early telephony, where Bell’s female operators performed the kind of “value-added” interactions that would be lost in the hum of the dial tone, it was not the introduction of the dial, or the careful indoctrination of subscribers to the mechanistic movements of dialing, that prompted transformation. Rather, change occurred due to a complex of uncoordinated causes, from the telephone number and its proliferation in directories to the gradual routinization of operator interactions. By the time the rotary telephone appeared, Palm suggests, it was both symptom of change for a certain class of customer and cure for a condition already known to many others. His reading of instructional films and advertisements (echoing Caroline Martel’s found-footage film, Phantom of the Operator) provides something of the drama evident when the telephone, equipped with its new rotary dial, was first revealed on stage. Palm’s prose doesn’t quite capture the horrific electric screech of the first dial tone, but it does deliver on its implications for the future of consumer labor.

While the introduction of the rotary dial takes place at the end of one shift in the distribution of consumer labor, the touch-tone keypad Palm covers in Chapter 3 heralded an entirely separate transformation for the technologies of self-service. By converting the content of a telephone connection into something accessible to the digital dialect of computation, Palm explains how the keypad not only enabled transactions over the phone, it established an input framework for the sorts of digital financial operations that would bleed into technologies like the ATM. Following changes in telephone service models, competition from new concerns like MCI and the emergence of digital applications that recalled the informal exchanges of early operators, Palm describes the ways in which touch-tone dialing worked to separate subscribers into “neoliberal telephone users,” excavating a historical moment that allows him to argue for the keypad, rather than the keyboard, as the foundational technology of the digital age. While the telephone’s interior wiring and mechanics remained much the same, the sort of systems it was set into became radically different—converting consumer choice and currency into sequences of ones and zeros.

Palm carries the logic of the keypad from the telephone to the teller, letting his last research chapter ground the ATM in the context of the technological and social changes that had begun with the touch-tone. Their easy expansion, Palm suggests, belies the foundations of the technological assemblage for which the ATM represented only the most obvious emanation. Indeed, the reciprocal relationship between the machines of consumer finance and consumer communication comes to a head in the smart phone’s touch screen. Just as the keypad moved from the telephone to the teller machine, and as the phone number prefigured the kind of codes magnetically affixed to consumer cards, Palm suggests that the emergence of the touch screen on ATMs ushered in its ubiquity as the common interface of the smart phone.

Technologies of Consumer Labor is a clear and concise look at a number of critical cases in the development of consumer technology, some familiar to scholars in media and communication, some less so. Its biggest weakness is also one of its greatest strengths. At 174 pages, including extensive notes and an index, it is a short narrative. This has the fortunate effect of making each chapter crisp and compelling, eminently assignable as a reading for classes and discussion groups. At the same time, some threads aren’t given the amount of attention they might deserve. While the arguments advanced in each of the four research chapters are well grounded, some of the more suggestive points, such as the discussion on the smart phone (alluded to in the introduction, and covered briefly in the volume’s conclusion), are more constrained. Palm promises to offer up telephone dialing as “an origin story for the digital everyday.” Like all stories, there are many parts still left to tell.