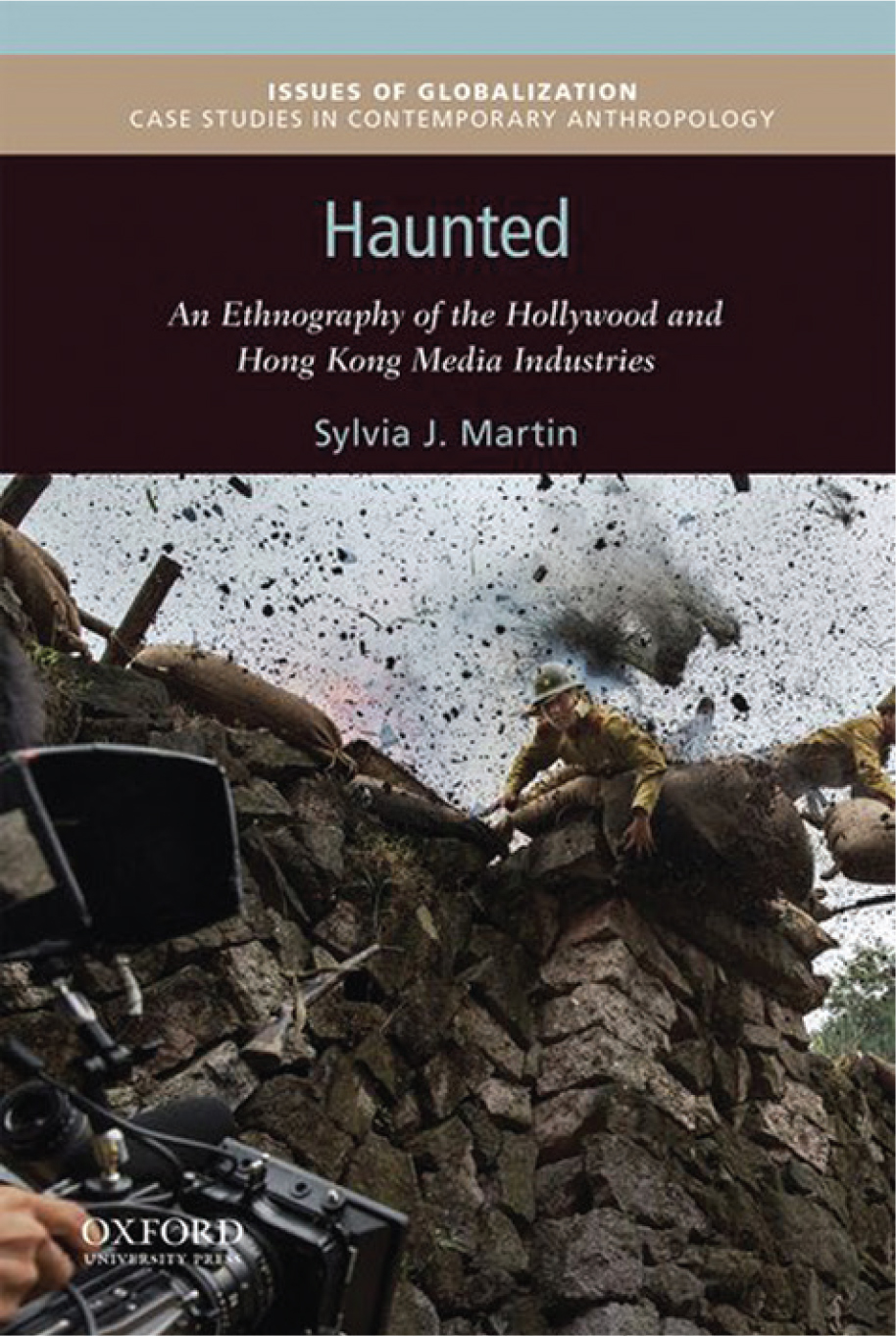 Sylvia Martin’s monograph Haunted: An Ethnography of the Hollywood and Hong Kong Media Industries offers scholars a critical, labor-focused interrogation into the distinctions and connections between the two title industries. Haunted is a well-written and engaging read with lucid observations about the impact political and economic trajectories have upon set life on opposite sides of the Pacific. Smoothly alternating between micro- and macro-scale descriptions, Martin, an anthropologist at the University of Hong Kong, hits her stride analyzing media workers’ behavior as they navigate risk, enchantment, and uncertainty, and then positioning these behaviors within what she refers to as “transnational media assemblage.”

Drawn from the work of fellow anthropologists Aihwa Ong and Stephen Collier, Martin uses assemblage as the base of her theoretical intervention, deploying the term to reveal the permeability of set life to a range of local, regional, global, and cosmological sources. For Martin, assemblage encompasses a “diverse collection of practices and personnel” that merge to produce “heterogeneous meanings” that are “not reducible to a single logic.”[2] The concept is expansive and generous, allowing Martin to place into relationship not only Hong Kong remakes in Los Angeles and fears of a rising China, but also the gambling behaviors of a Hollywood lighting team and the involvement of triads in Hong Kong media financing. To explore transnational assemblage at work, Martin divides her book into three conceptual sections, each containing two to three analytical chapters. The first section, “The Assemblage of Spectacle,” starts with a chapter traversing broad critical histories and then shifts to a chapter revealing the traces of these histories embedded within daily set life.

In the book’s opening chapter, “Contrasts, Commonalities, and Connections,” Martin chronicles the development of the Hong Kong and Hollywood media industries and reveals connections stretching back to Cantonese opera troupes that toured California in the early 1900s. With a clear focus on political economy and labor organization, she contrasts the laissez faire Hong Kong media framework enacted under British colonial rule with the lobbying work of the Motion Picture Association of America (MPAA) and long-term American government support for Hollywood. While describing broad industrial trajectories, Martin keeps the experience of individual workers in focus by describing the evolution of labor in each location. Martin places particular emphasis on the historical conditions that brought formal unionization to the sets of Hollywood and kept them out of Hong Kong. She points out that the absence of strong divisions of labor that unionization has brought to Hollywood is seen as a positive feature by workers in Hong Kong who view their on-set flexibility as enabling faster, defter, and cheaper production. Although this dexterity is a point of pride for all types of workers in Hong Kong, Martin notes that it was British colonial policies that “scourged leftist, anticolonial elements and promoted the interests of right-wing companies,”[3] forming the primary cause of the flexibility that workers profess to admire.

Having uncovered key political distinctions between media work in Hong Kong and the United States, Martin’s second chapter, “The Spectacle of Production/The Production of Spectacle,” turns more directly to analysis of on-set behaviors. She compellingly argues that media workers on television and film sets function as an overlooked initial audience for the creation of many forms of media spectacle. On a set, workers across departments can display their skills to impress colleagues, build rapport, and secure future employment. Given these potential immediate and delayed benefits, Martin suggests this peer group may be a more important audience for media laborers than the final consumers of the finished media product. Of course, not all on-set action leads to mutual support, and Martin ends the chapter with insightful observations about how competition and jealousy play out between departments and individuals.

The book’s second conceptual section, “Local Sets, Global Forces,” covers the next two chapters and enables Martin to turn her attention to the impact of accelerating media globalization on media industries and their laborers. Once more, the concept of assemblage frames her approach. In Chapter 3, “Gambling, Striking, and Assemblage,” Martin offers a series of vivid anecdotes from her time working on television sets in Los Angeles with particular focus on how workers negotiate risk, boredom, and shifting revenue streams. Sketching out what she calls the “ethos of risk” that permeates set life, Martin links the capricious reward system featured in on-set games enjoyed by below-the-line workers with the unpredictability of landing a job on a television series that finds popular success. Of course, games are not the only way to confront economic precarity. In 2007, Martin conducted interviews on the front lines of the Hollywood writer’s strike. There she noticed workers arguing for their value in Hollywood by drawing upon an imagined “Other.” In signs and words, they argued that their storytelling expertise couldn’t be replicated by media laborers “in China.” Martin finishes the chapter with a further exploration of this trans-Pacific tension in a section based on ethnography she performed on the set of a mid-2000s Hollywood remake of a Hong Kong horror film that employed an international crew. This section allows her to confront issues of racism in Hollywood and the growing fear of China as a media competitor.

In Chapter 4, “The Death Narratives of Revitalization,” Martin reveals that China functions as a monolithic Other not only in Hollywood but also for Hong Kong filmmakers who believe their industry is dying. However, Martin argues that China is not the primary cause for the conditions beleaguering the local industry. Instead, she suggests, it was the “positive non-interventionist” approach of the British colonial government that left the industry exceptionally vulnerable. Martin insists that despite the rhetorical championing of non-intervention, the economy of Hong Kong flourished in part because of government subsidies in non-media sectors such as housing and healthcare. She contrasts the colonial era’s absence of media support with the unfolding of the 2004 Closer Economic Partnership Agreement (CEPA) between Hong Kong and the Chinese mainland, which she sees as key to revitalizing local production by opening People’s Republic of China (PRC) funds and audiences to Hong Kong producers.

The final section of the book, “Performance and Possession,” examines the confluence of media labor and camera work with the cosmological. Chapter 5, “Of Ghosts and Gangsters,” looks at the financial, creative, and logistical impact of Hong Kong’s twinned underworlds and their concomitant demands for appeasement in exchange for services. Looking back to the legacy of ghosts as performance partners and barriers in nineteenth-century Cantonese opera, as well as the entry of triads into film financing and distribution during the 1970s and 1980s, Martin’s ethnography smartly illuminates the potential positive and negative roles gangsters and ghosts can fulfill on sets.

In Chapter 6, “Affective Labor,” she turns her attention to possession in Hollywood, expanding the notion of actors “inhabitating” their characters by looking at the compromises demanded from all types of set workers involved in regular transitions between nonfictional and fictional worlds. When characters die, Martin points out, it isn’t only the actors who may mourn. In her final chapter, “Camera/Chimera,” Martin looks at the many roles fulfilled by the camera on set, noting its powerful ability to “pierce” and “possess” media workers. Martin’s point that the camera is an “ethically charged force” on set allows her to examine choices made by all types of workers performing for the camera. This chapter concludes with a compelling exploration of the ethics and consequences of a Hong Kong crew shooting footage after a real-world suicide occurs adjacent to their set.

Although Haunted is a valuable engagement with the past and present circumstances of these vital media industries, a few gaps remain. Martin deftly describes how political priorities impacted the colonial Hong Kong government’s media policies, but the book would benefit from a similar analysis of the PRC government’s priorities that impact Hong Kong policies and workers. While it is true that the CEPA agreement has gradually relaxed limits on the percentage of Hong Kong media personnel allowed for a project to obtain co-production status, the PRC’s approach to the Hong Kong industry after the Handover in 1997 and before the start of CEPA in 2004 was largely lacking support for the workers employed in the declining industry.

Given Martin’s training as an anthropologist, it is unsurprising that the on-set ethnographic passages in the book are some of the most engaging and compelling portions of the book. However, Martin’s devotion to the set as an ethnographic site overlooks the importance of connections that traverse on- and off-set life. In recounting the camaraderie and competition between filmmaking units (electricity, carpentry, makeup, etc.), Martin omits details regarding the workers’ previous collaborations. Surely familiarity, comfort, and creativity deepen with each opportunity to work together, resulting in on- and off-set relationships that span productions.

Finally, in an awkward pairing, Martin links on-set displays of talent by stunt workers, makeup artists, and actors with Tom Gunning’s “cinema of attractions.” Although these displays are intended to impress and elicit awe from peers, showing off one’s professional expertise for an audience of professionals who intimately understand the demands of media production seems crucially different from the use of spectacular effects to shock and attract early paying spectators to cinemas. These issues notwithstanding, Haunted is a valuable contribution to the field due to its unique content, creative critical framework, and ethnographic approach.