John McMurria’s deeply researched and compellingly argued new book, Republic on the Wire: Cable Television, Pluralism, and the Politics of New Technologies, 1948-1984, contributes to ongoing debates about how new media technologies are promoted as tools for democratizing communication. Specifically, McMurria traces how these discourses of democratization informed the development of cable television at several key moments during cable’s early history. Throughout this history, McMurria notes, the concept of the “public interest” is deployed in ways that deny the expertise and participation of people other than educated professionals. Spanning five chapters—with an epilogue focused on current debates about the politics of digital media—Republic on the Wire offers an important corrective to histories of media that celebrate the potential of new technologies to create a more diverse and democratic political environment. To put McMurria’s thesis more explicitly, he is concerned about the ongoing “quarrels” about who is qualified to make decisions about television’s role in society.[2] 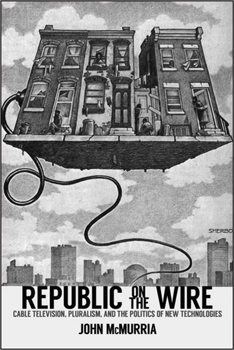 McMurria introduces the book with a useful survey of 1950s social science research, including the fields of political science and behavioral psychology, that promoted the discourses of American pluralism as a force for dealing with rapid industrialization, mass migration, and other social changes. Citing influential researchers such as Harold Lasswell, who argued that the individual “is a poor judge of his own interests,” and Robert Dahl, who argued that working- class people could only successfully enter the political domain by adopting a middle-class “disposition,” McMurria shows how these studies helped to marginalize women, people of color, and working-class people, excluding them from involvement in the governing process. McMurria then traces how these pluralist discourses have come to shape policy debates over new media technologies using what he calls “the method of equality,” rather than using pluralist approaches.

In chapter 1, McMurria challenges some of the traditional pluralist arguments that informed the Federal Communications Commission’s (FCC) emphasis on localism and competition when making decisions about the 1952 spectrum allocation for broadcast television. As McMurria meticulously documents, this spectrum allocation slowed the expansion of television in rural sections of the United States. He asserts that a number of scholars have argued that the 1952 FCC spectrum allocation discussions constituted a progressive moment in which the FCC was concerned with supporting a public-service approach to broadcasting that worked against the “crass commercialism” of broadcast television. McMurria contests these overly broad distinctions by pointing out that they overlook the larger question about who decides what counts as public interest programming. Notably, McMurria contrasts public interest programming, including adult education shows and shows about the “Great Books,” with the outcry over soap operas, which were seen as appealing to base emotions.

Chapter 2 challenges discourses of localism from a different perspective, noting that rural residents argued for a “leisure-time entitlement” that guaranteed access to regional and network-affiliated stations. As McMurria notes, these debates had profound political implications, especially in the south where local television stations often shut out the Civil Rights Movement by replacing national coverage with locally produced pro-segregationist content or choosing to broadcast local content, such as Golden Gloves boxing matches, that ignored the racial disparities inherent in television station ownership and production opportunities.

Chapter 3 extends this history, examining early debates about pay TV in the 1950s and 1960s. In particular, pay TV was seen by its proponents as a means of supporting high-culture content that would mitigate the negative effects of low-culture content like soap operas. The following chapter addresses the Johnson Administration’s attempts to espouse cable television as a technological solution to the problems of civic alienation and urban poverty. By comparison, Civil Rights activists at the time countered these claims by arguing that racism and economic marginalization were responsible for the perceived lack of civic engagement in inner-city communities.

Finally, chapter 5, “Blue Skies, Black Cultures,” addresses the ways in which black activists contested pluralist approaches to alienation by seeking to gain ownership of cable systems. McMurria focuses on three cases in which coalitions of black citizens and activists attempted to take ownership of local cable systems in Los Angeles, California, Dayton, Ohio, and Gary, Indiana. As McMurria notes, black groups in Los Angeles faced significant institutional obstacles that made these projects all but impossible. Investors were reluctant to support such projects, and elected officials felt pressure from political donors to block a black-controlled and operated cable system. Groups in Dayton and Gary faced similar institutional challenges, although the Gary group did successfully—if briefly—launch a cable system. McMurria insightfully reads the programming on Gary’s public access channels in terms of the everyday politics of the community, noting that shows addressed concerns such as home repair, prenatal health, and real estate. This chapter offers a vibrant and carefully researched account of how minority groups were largely prevented from owning cable systems.

In his epilogue, McMurria applies his equality framework to examine current debates about the politics of the web. In particular, he challenges the ongoing activist work that has focused primarily on net neutrality, the principle that the internet should be regulated like a public utility, and, by extension, that all internet content should be treated equally. He points out that Tim Wu, in his foundational delineation of network neutrality, borrowed from the pluralist discourses that shaped debates about broadcast and cable television.[3] Specifically, Wu argues that net neutrality, unlike cable television, would protect and foster noncommercial and public interest media. McMurria is utterly persuasive when he draws comparisons between pluralist approaches to media and the current vogue for “long tail” narratives that celebrate consumer choice. Instead, McMurria asserts that we should focus instead on fostering what he calls “net equality,” the idea that we should work toward ensuring that all citizens have equal ability to access broadband internet. Tracing data that show a lingering “digital divide,” McMurria advocates for lowering barriers to broadband internet adoption using approaches that might not be fully consistent with net neutrality principles.

This book is a useful contribution to media history research as well as debates about media policy. At a time when the politics of media ownership are being hotly contested due to the recent frenzy of media mergers that have been approved by a Trump-era FCC, McMurria shows the stakes of why we need to advocate for greater equality when it comes to media ownership. The historical pay-TV models described by McMurria also provide a useful metric for thinking about how media ownership functions in an era of digital delivery. Rather than utopian narratives about access and choice, we need to carefully examine how these distribution models serve a wider public.