Media studies is replete with works that examine the ways in which changing modes of distribution affect consumers. Many of these texts also incorporate legal sources and arguments; however, relatively few of these works delve deeply into the legal underpinnings and consequences of new distribution platforms. With The End of Ownership: Personal Property in the Digital Economy, Aaron Perzanowski and Jason Schultz have provided a significant boost to this relative lacuna, especially as it relates to consumer property rights in a digital era. Moreover, The End of Ownership provides a crash course in property rights that is digestible by readers who have not completed a juris doctorate, a feature which owes much to the clear and simple writing style employed by Perzanowski and Schultz and to the numerous, quotidian examples that augment the text. 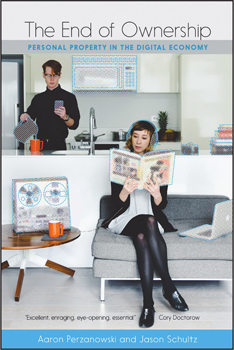 The book’s organization guides the reader through the overarching concerns with the erosion of consumer ownership rights to individual problems that are symptomatic of this general ownership desiccation. First, the authors focus on general legal principles related to property ownership before they move on to specific concerns regarding digital distribution and licensing agreements, as well as the threat faced by important public education institutions like libraries. The authors also broaden the scope of their readership by offering a feasible plan for political and legal structures to reinvigorate consumer property rights in a digital era.

Perzanowski and Schultz have a relatively straightforward purpose with The End of Ownership: They wish to explain how consumers relate to the products they purchase (both analog and digital), how this particular historical moment of property rights came to be, and what the most harmonious way forward is for copyright owners and consumers alike. In doing so, the entirety of copyright, property rights, patent law, and intellectual property (IP) history is fair game, although the authors devote much of their focus toward property rights and copyright, introducing patent law and IP when relevant. As such, readers are introduced to a variety of esoteric-yet-germane pieces of legislation and jurisprudence, ranging from eighteenth-century British copyright law to a nineteenth-century US Supreme Court ruling pertaining to coffin lid patents to a 2008 US Supreme Court ruling covering the importation of textbooks to the United States and the limits of price discrimination. Many of these examples (particularly those that explicitly relate to the media industries) will be familiar to media studies scholars; Perzanowski and Schultz expand existing understandings of these cases by helpfully breaking down the “legal-ese,” historically contextualizing them and demonstrating their relevance to ongoing digital property rights jurisprudence and legislation. However, as these examples show, it is important to note that The End of Ownership is very much a book focused on Western—and usually American—legislation, regulation, and court decisions regarding property rights.

At the heart of the work is a focus on the exhaustion principle—the idea that once a copyright owner sells a copy of a work to a consumer, they surrender some amount of control over that copy—as it relates to property rights. The authors repeatedly highlight it in both historical and contemporary contexts to demonstrate that exhaustion rules have always been constructed in such a way as to privilege the interests of the individual copy owner over the interests of the copyright holder. Exhaustion principle has numerous benefits for consumers, such as allowing the resale of lawfully purchased products or backing up software on a personal hard drive. Essentially, exhaustion is “. . . central to securing the benefits of privacy, preservation, innovation, and competition that flow from consumer ownership of products that contain copyrighted works.”[2]

While laying out the foundations of American property law, The End of Ownership is chiefly interested in how emergent digital distribution platforms are radically reorganizing the way property rights are understood and applied in legal settings and the erosion of ownership. As the book’s title suggests, the contemporary, digital media ecosystem (information ecosystem might be a more applicable term) is one in which the property rights of consumers are quickly vanishing at the hands of the copyright industries’ new, favorite legal cudgel: the license agreement. Perzanowski and Schultz identify the license agreement as perhaps the most pernicious development in contemporary property law, as they radically alter the balance of power toward copyright owners and away from consumers:

They create private regulatory schemes that impose all manner of obligations and restrictions, often without meaningful notice, much less assent. . . . They are an effort to redefine sales, which transfer ownership to the buyer, as something more like conditional grants of access.[3]

The book’s emphasis on the extralegal tactics that undergird the license agreements used by IP owners adds to the body of work that examines how consumer use of copyrighted material can be increasingly circumscribed through alternative tactics employed by the copyright industries. Most notably, The End of Ownership recalls one of the central arguments made in Tarleton Gillespie’s Wired Shut, that compliance with the demands of IP owners can be embedded within technological devices themselves, no longer necessitating a strictly legal framework within which to operate. Gillespie’s work focuses on how the copyright industries embedded digital rights management code into DVD players themselves; Perzanowski and Schultz add to the growing body of literature by drawing similar comparisons with license agreements and copyright.

The authors excel at demonstrating not only why the modern licensing agreement is a perversion of the idea of license agreements but also why it is not normally a legally robust practice, despite increasing deference from the legal system. In doing so, the authors identify the main problem of the prevalence of license agreements in place of outright ownership as allowing courts to redistribute the power to delineate the rights of consumers from a nominally public lawmaking process toward private rights holders. There is a fundamental crisis taking place whereby private entities are able to circumvent existing IP regulations, legislation, and jurisprudence; it is couched in the banality of end-user license agreements (EULAs), those documents that require consumer assent every time a piece of software is activated.

While the legal and regulatory picture painted by Perzanowski and Schultz is not a particularly cheery one, they do offer a path forward, a sort of plan of attack to more effectively balance the needs and rights of consumers with those of IP owners. This is the book’s greatest strength, as it clearly outlines how courts that enforce existing laws and legislators who enact meaningful laws can help redistribute the IP balance of power. Actionable items include urging the Federal Trade Commission (FTC) to investigate retailers and digital platforms who use a “Buy Now” button to sell consumers a product that they are actually licensing, encouraging retailers to include a notice of what consumers can and cannot do with the product they are purchasing, and suggesting courts stop viewing EULAs as contracts and instead treat them as grants of permission. These recommendations all seek to rebalance an asymmetrical relationship between consumers and IP holders.

The End of Ownership is at its strongest when analyzing the legal frameworks for the current state of property rights in a digital era; however, the book’s legal scope is also a limitation. There is minimal discussion of the role consumers play in the development of this technology, and this lack of agency for consumers is a loud silence. Similarly, there is an understandable emphasis on legal and political avenues for change, yet there is only oblique mention of direct consumer action or rebellion (mostly discussed historically in terms of hackers and pirates). Inherent in the text is a default assumption that the dominant ideologies of property rights are the only viable political economic philosophy, as opposed to more radical ideologies that might redefine what ownership entails.

The End of Ownership is a valuable contribution to the intersection of the legal and media studies fields in its explicit and direct confrontation with the emergent crisis of license agreements and the attendant erosion of property rights in the digital era. Numerous legal precedents are discussed and their relevance to contemporary digital property rights is explained in terms that nonacademic readers can understand. This book is a valuable resource for media studies scholars who may not be fully versed in the history of property law. Furthermore, the prose is clear enough that the text would be well suited for undergraduate courses focusing on digital distribution platforms and/or media law. Finally, while the future may look bleak for consumer rights in a digital era, Perzanowski and Schultz provide a robust legal and juridical agenda that scholars and consumers can follow in their efforts to more equitably distribute the balance of copyright power.