Brooke Duffy’s new study of workers and work at the margins of the culture industries speaks to a set of nagging questions at the heart of labor studies in the creative industries. If, as Duffy demonstrates in her introduction, industries such as fashion, advertising, and public relations (PR) consistently preach that career aspirants should get paid to do what they love, how should we square their ambitions and their willingness to work for “exposure”? What gives these workers faith that their passion projects will eventually lead to fulfilling, gainful employment? What interventions should be made in the cultural industries to correct asymmetrical and gendered patterns of (under)employment and accumulation of capital? Duffy intervenes in debates about digital labor not through an explicit systemic critique but through an exploration of the dialectical positionalities voiced by her fifty-five interviewees: bloggers, independent photographers, unpaid PR, and social media interns, the vast majority of whom are women. This approach enables a careful consideration of the politics within these cultural work categories from the ground-level perspective of this particular category of cultural worker. 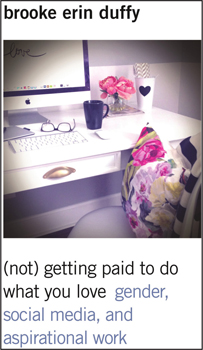 Duffy coins the term “aspirational labor,” which she defines as “a mode of (mostly) uncompensated, independent work” which “shifts content creators’ focus from the present to the future, dangling the prospect of a career where labor and leisure coexist.”[2] The book’s first two chapters have the daunting task of sifting through an array of similar but slightly different scholarly conceptualizations of labor: free labor, venture labor, hope labor, women’s work, affective labor, relational labor, and emotional labor all make appearances. Duffy considers aspirational labor a variant or descendent of most of these terms, most specifically hope labor, but marked specifically by its dependence on participation through consumption and the postfeminist logic of visibility as empowerment.[3] The specificity of aspirational labor is helpful for explaining the unique labor formations within the creative industries of fashion and lifestyle blogging, Instagramming, and vlogging. Chapters 3 through 7 extensively quote Duffy’s interview subjects. Their aspiration, exasperation, and occasional desperation are palpable on the page; one never doubts that Duffy is describing a set of labor relations that her interviewees negotiate on a daily basis. The overall whiteness of these voices is undoubtedly an outgrowth of the gender and class politics inherent in this form of cultural work; an increased emphasis or expanded focus on the differences within Duffy’s sample population could form a future phase of this research. For example, the male fashion photographer quoted in chapter 3 and the black style bloggers quoted in chapter 4 have unique stories and viewpoints that future work in this area should explore.

Duffy’s critical intervention is reading her interviewees’ descriptions of their aspirational labor as part of a larger history of asymmetrically valued gendered labor, based on the historical co-construction of women as aspirational consumers, especially online, and as unpaid household and/or social laborers within patriarchal systems. Although this has culminated in what Lisa Adkins argues is the “cultural feminization of economic life,”[4] Duffy reminds us that women are structurally hampered from realizing the economic benefits of entrepreneurialism by (among other things) gendered divisions of labor in the creative industries, which are themselves based on the historical gendering of particular kinds of work. Duffy also distinguishes her analysis of aspirational labor from more polemical or explicitly structural critiques of digital labor by acknowledging that her informants reap certain benefits from their work, such as finding pleasure and developing skills that will be useful in jobs they hope to secure in the future. Duffy instead builds a critique of the systems of digital labor through the voices of laborers, acknowledging their triumphs, their struggles, and their ambivalence while tying together their individual stories into a collective, critical narrative of the struggles of precarious cultural workers in the fashion, design, PR, and advertising industries.

Chapter 3 addresses the work of producing content in an age of social media participation. No matter how much they enjoy their content creation activities, interviewees describe this as work and participate in professionalization practices that parallel those practiced by waged workers in legacy media companies. Duffy argues that the ubiquity of these practices not only blurs the line between online labor and online sociality but also hides the extent to which the relational aspects of aspirational labor still rely on extant networks of social and cultural capital.

This critique is also the major theme of chapter 4, which charts how interviewees deploy the ideal of “authenticity” in contested and contradictory ways. While bloggers position and present themselves and their content as more “authentic” or “real” than the content on offer in magazines or published online by legacy media brands, being featured by these magazines is still seen as a gateway to more stable employment in their desired industries. Thus, “authenticity” is a profitable strategy of content production for an audience hungry for this particularly classed (and implicitly raced) performance of personal style. Chapter 5 describes how advertisers take advantage of these performances as marketing opportunities and how the gendered labor of blogging makes it easy for brands to undervalue the work of self-presentation that gives blogs value in the online marketplace. Here, Duffy links commercialized logics of self-branding to the precarity of blogging as a profession; brands and bloggers alike see in each other an opportunity for mutual exposure to a valuable audience, but bloggers’ wages and profits for the work of making sponsored content in ways audiences deem authentic are deferred in lieu of gifted merchandise or “exposure.”

Chapters 6 and 7 together address how the gendered politics of aspirational labor have profound material consequences on the lives of bloggers. Chapter 6 focuses on interviewees’ ambivalence about the benefits of freelance or entrepreneurial work. Bloggers describe maintaining not just a consistent, “authentic” personal brand, but also suturing that brand to their personal life and personal social media accounts. These self-representations obscure the amount of humdrum managerial and logistical work that made one informant describe her allegedly freeing lifestyle as “a lot like a traditional desk job.”[5] Duffy’s informants express both the pleasure of having a self-designed schedule and the familiar pains of precarious labor, such as inconsistent funding and the tendency of established media industry players to insufficiently value their work. Chapter 7 concludes the book by synthesizing Duffy’s critiques of the unequal relationships between media companies and their aspiring workforce, the problematic gendering of social labor that renders it less visible in the marketplace, the “Instagram filter”[6] that obscures the quotidian labor of this category of cultural work, and the marketized logics that make the struggles of freelance work seem like a problem for individuals, not collectives, to solve.

(Not) Getting Paid to Do What You Love is an engaging read, thanks in large part to Duffy’s effervescent prose and palpable empathy for her subjects. It is strongly recommended to readers who are interested in ground-level analyses of precarious media work and those eager to read about the role of gender in new media work. That said, the book raises a significant question for future studies of creative labor in the media industries: What is the use of this fractured landscape of labor concepts? The litany of terms that Duffy works through early in the book are all useful. These scholars, Duffy included, wrestle with an intuitive sense that something new has entered the modern workplace, the complicated effect of which is more than can be explained merely by capitalism or neoliberalism, although these economic ideologies are certainly implicated. Duffy’s attempts to disambiguate theories of labor may cause readers to wonder about the usefulness of the myriad terms for digital labor formations and to wish for a more holistic assessment of the field and its ever-more fractal terminologies. In the epilogue, Duffy casts academic labor as precarious cultural work, gesturing toward a more collective critique of cultural work. Recognizing the creeping precarity of cultural work across various industries and workplace environments as a cause for collective action is an important next step in labor studies and digital studies.[7]