The early twenty-first century has seen the emergence and prominence of African American filmmakers like Tyler Perry and Ava DuVernay who have gained popular success in an entertainment industry that has frequently marginalized or outright excluded black cultural producers. Their current achievements are part of a larger legacy of African Americans negotiating the politics of race in Hollywood. Keith Corson’s Trying to Get Over: African American Directors after Blaxploitation, 1977–1986 investigates the production of commercial black-oriented films in the decade after the end of the Blaxploitation cycle. 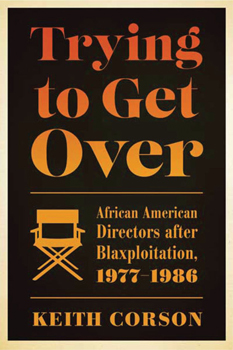 This book focuses on the work of eight black directors—Michael Schultz, Sidney Poitier, Fred Williamson, Jamaa Fanaka, Gilbert Moses, Stan Lathan, Richard Pryor, and Prince—who navigated the film industry during the post-Blaxploitation decline of output by African Americans, a decline that continued until the late 1980s and early 1990s rise of new black cinema most associated with Spike Lee. The individuals who did manage to find jobs in this period of uncertainty and the work they created have escaped sustained analysis as part of the robust tradition of mainstream African American filmmaking. Thus, Corson’s project is in part an important intervention into the study of the archive of black-oriented movies, bringing those less-cited film texts and their directors to the forefront of our scholarly engagement with the vastness of African American cinema.

In conversation with film historians who examine media industries, Trying to Get Over puts forth a genealogy of mainstream black cultural cinematic production by focusing on the figure of the director. In contrast to studies of authorship that rely on theories of the auteur, Corson impresses upon readers the collective quality of making films, especially for “minoritarian” subjects who must establish connections and cultivate networks to realize their work on the big screen. He argues that the eight directors he examines are critical to the study of black culture and politics in popular media.

Corson articulates how a select group of African Americans remained gainfully, albeit tenuously, employed in white-controlled Hollywood. Central to his analysis of the precariousness of black labor on- and off-screen is the idea of “trying to get over”: a reference to a lyric from the title track of Super Fly (Gordan Parks Jr., 1972) by musical artist Curtis Mayfield. Broadly understood, “getting over” is the struggle for full legal and political citizenship for black Americans and all the privileges that it affords socially and economically. In Hollywood during the post-Blaxploitation ebb, “getting over” consisted of strategies to secure work amid systemic racism in the workplace. In this way, the book illuminates the “shifting dialogue concerning race, power, and access” in the film industry in a time period that is rarely discussed.[2]

Trying to Get Over is divided into seven chapters, as well as a brief introduction and conclusion. The book explores black-focused films in terms of production, distribution, and exhibition practices and foregrounds the plight of the African American director. The inclusion of biographical details about each of these directors gives readers a sense of their personal life and how it affected each director’s professional trajectory. Chapter 1 frames the project in its attentiveness to laying the groundwork for black directors working in Hollywood (most notably Gordon Parks) while also focusing on the emergence and decline of the Blaxploitation cycle, a lucrative industry formation that ended in 1976 due to shifts in business practices and film financing. The second chapter highlights the work of Michael Schultz whose movie Car Wash (1976), Corson argues, is the “apotheosis” of 1970s black-oriented filmmaking.[3] The Last Dragon (1985) is a black fan favorite over thirty years later. Despite his isolation in Hollywood, Schultz became a profitable African American director with an impressive and wide-ranging body of work emphasizing black culture and experience.

Chapter 3 provides a glimpse into Academy Award–winning actor Sidney Poitier’s overlooked career as a director. Corson describes the tension between Poitier’s integrationist star image and his aspirations to create work for a black audience. His 1972 directorial debut Buck and the Preacher, a Western in which he costarred with Harry Belafonte, came by accident after the two entertainers fired the film’s white director after three days. Buck and the Preacher exemplifies Poitier’s politicized movie-making as well as performance-centric approach to direction. Comedies Uptown Saturday Night (1974), Let’s Do it Again (1975), and A Piece of the Action (1977) completed his foray into the dual actor-director role. Corson notes that Poitier’s four-year deal with Columbia signed in 1978 afforded him the freedom to direct, write, and/or act in films of his own choosing. Stir Crazy (1980), which Poitier directed, became his highest grossing movie, and Corson suggests that his career behind the camera can be seen as a “transitional experiment” between his early screen stardom and turn as a memoirist in his later life. Chapter 4 recounts Fred “The Hammer” Williamson’s transition from Blaxploitation cycle movie star to film director in a global market. With foreign funding and support for his projects, Williamson’s brand of “getting over” allowed him to work outside of the domestic market in countries such as Italy. In turn, he cultivated an international legacy for black-oriented productions.

Of special interest is Corson’s intervention into the history of the UCLA School of Filmmakers, known collectively as the LA Rebellion, through an engagement with less discussed director Jamaa Fanaka. Chapter 5 situates Fanaka as an individual that trafficked in the same circles as his radical alternative filmmaking peers, although his goal was to make commercial cinema. His interest in Hollywood and making popular films led to independent releases such as the box office success Penitentiary (1979). As Corson states, Fanaka “desired the financing and distribution machinery of the studios as well as the prestige of being a mainstream director.”[4] Despite making two Penitentiary sequels and gaining membership in the Directors Guild of America (where he cofounded the African American Steering Committee), Fanaka was ultimately burned by the industry. Thus, he did not receive the long-lasting recognition and acceptance in Hollywood that he enthusiastically courted.

Chapter 6 examines the careers of Gilbert Moses and Stan Lathan who made names for themselves in theater and television. Their directorial turns in feature films that center on basketball and hip-hop—genres especially important to black expression—signaled the introduction of these entertainment forms to mainstream media and popular culture. Finally, the seventh chapter takes up Richard Pryor and Prince, icons who both made their directorial debuts in 1986 with Jo Jo Dancer, Your Life Is Calling and Under the Cherry Moon, respectively. Corson notes how their celebrity status allowed them “to gain access to financing and a level of creative control that was being denied to other black filmmakers.”[5] At the same time, their individual genius and artistic visions were often in conflict with modes of cinematic production that emphasized collaboration. The conclusion to Trying to Get Over shows how current successes and failures of black directors can be tied back to how these eight individuals between 1977 and 1986 navigated structural barriers to entry in the commercial film industry.

In addition to archival research, Corson conducted interviews with Schultz, Williamson, and Fanaka that augment his extensive industry study of these directors and their films. The anecdotes about production cultures described throughout the book provide texture. He also includes useful analyses of film texts in each chapter that are attentive to both narrative and style. A filmography spanning twenty-five years (1969–94) at the end of the book contains a list of theatrically distributed fiction films that had an African American star, director, or black-focused story. Such a comprehensive inventory is useful for future work on African American cinema.

Trying to Get Over invites readers to immerse themselves in black film work that is frequently obscured. The book is an ambitious project, and with so many exciting nuggets of information about each director’s unique path in the film industry, Corson’s larger conceptual frame and argumentative thread can get lost in the shuffle. While Trying to Get Over provides an expansive view of African American directors of black-focused film in a post-Blaxploitation era, one wonders about the racialized dimensions of the mainstream film industry as they intersect with gender during this time period. Black women are almost entirely absent from Corson’s examination of this decade of production history. It would have been useful to foreground this male dominance as a way to preliminarily interrogate the invisibility of black female directors.

Nevertheless, Trying to Get Over is required reading for those interested in film at the intersection of racial politics, production histories, and media industries. In particular, Corson deftly conveys intricacies surrounding decisions on issues like hiring in commercial cinema, decisions that are often considered mundane. In scale and scope, he fruitfully takes on questions concerning industry, text, and audience in a critical decade for black-focused filmmaking. Most of all, he reminds us of the rich and dynamic history of African Americans in Hollywood persistently making films that are now considered cult classics.