The rise of digital and social media in the new millennium has spurred intense academic and popular discussions about the shifting nature of audiences’ mediated engagement with each other. As space and time-defying technology redefines individuals’ sense of place and belonging, media reception and the work of the imagination have taken on new and increasingly global dimensions. 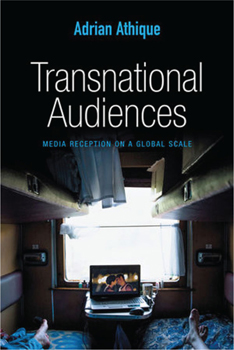 In his book Transnational Audiences: Media Reception on a Global Scale, Adrian Athique helps readers sort through the key issues relevant to these contemporary developments. By providing a survey of the theoretical foundations of transnational communication and “cogent examples of media configurations operating across our increasingly interlaced world,” Athique offers much needed historical and disciplinary contextualization to the different lenses through which the notion of transnational audience has been approached by scholars. The result is a detailed roadmap for students and scholars wishing to enter the conversation and a theoretical and methodological tool kit for those interested in studying transnational audiences in a variety of setting.

Developing this tool kit requires Athique to wrestle with the changing configuration of audiences’ relationship to the global, national, and local under conditions of globalization. Noting that “Our everyday perceptions of the larger world are framed by the ubiquitous circulation of media artifacts, while our personal access to global communications systems facilitates the globalization of our personal domain,” Athique aims to develop a framework for understanding new audience formations as “our personalized understanding of our social relationships, responsibilities and potentials is constructed in relation to our capacity to comprehend our place, and other places, in a global totality.”[2] The book’s first chapter usefully defines the terms of the theoretical debates about the nature of transnational culture and its reception arising from this evolving contemporary condition.

The next section “Imagined Worlds: National, International, Transnational” lays out the theoretical foundations of audience and global media studies from early discussions of national identity and cultural homogenization/imperialism to the transnational shift signaled by Castells’s networks or Appadurai’s scapes. Much of this history will be quite familiar to global media scholars and has been described in numerous other texts, but will provide a good point of entry for those new to the field. Part 2 titled “Media Flows: Diasporas, Crossovers, Proximities” takes a closer look at how global audiences have been approached, conceptualized, and empirically studied in academic research from different theoretical and epistemological positions.

Taken together, these two sections tend to read more like a survey of the canons of audience and transnational media research than a deep theoretical engagement with its contemporary developments. Although historical context is important and acknowledging key texts is useful for students and for those entering the field—which, in all fairness, appear to be Athique’s main audiences—one cannot help but wonder about the politics of further canonizing those already canonized. This becomes particularly problematic when Athique discusses individual scholars or studies at great length while failing to acknowledge alternative positions or more recent revisions—as when he uncritically accepts that we will live in a network society as envisioned by Castells.

This focus on the canons also gives the book a bit of an Anglo-American slant. One wonders, for instance, why Koichi Iwabuchi’s theoretical contributions to our understanding of global cultural flows are only mentioned in passing in a section on Asia. Iwabuchi’s argument that Japan’s cultural engagement with the West, in what he calls an act of “strategic hybridism,” has historically served to erase the country’s own colonial aggression throughout Asia could have usefully complicated the discussion on imperialism found in chapter 3. Instead, the chapter itself contributes to the continuing erasure of colonial dynamics falling outside of a “West as colonizer/East as colonized” dyad, for which postcolonial theorists have long been critiqued—and which scholars have addressed in the past 20 years or so.

Also conspicuously absent from this part of the book is the extensive body of work on audience reception produced by feminist scholars and, in particular, the works of transnational feminists who have usefully complicated the global power dynamics of media production, distribution, and consumption and produced powerful critiques of the politics of global academic production.

Overall, Athique is at his best when he most energetically asserts his own voice into the text and moves from the descriptive to the analytical. This happens especially in the book’s final section “New Formations: Clouds, Trends, Fields,” which addresses the more recent theoretical and methodological developments spurred by the rise of the Internet and digital communication.

Here, Athique provides a nuanced and sophisticated assessment of the tectonic shifts spurred by the development of digital culture and numerology on the study of audiences in a global context. While acknowledging the methodological potential of “big data” for audience research, he does not fall into the celebratory pitfall of seeing data scraping as an end point in our understanding of global cultural formations. Noting that “taken by itself, it is hard to see how scraping away at the big picture can tell us much that is meaningful,” he makes a powerful call for continued attention to the multilayered lived experiences—including digital ones—and material conditions of media users and consumers in specific local contexts.[3] In other words, Athique forcefully recasts the audience, in all of this current complexity, at the center of the debate about transnationalism.

His call for a continued focus on the national and the role of the imagination throughout the book is also noteworthy. While mindful of the pitfalls of approaching audiences solely through a nationalist lens, Athique recognizes the continuing, and possibly even growing, relevance of national imaginaries in the staging of transnational politics. Moving the theoretical debate about national identity and culture forward, the book explores new configurations of the local/national/global nexus in which “transnational media systems are becoming a major site for the articulation of national cultures, national politics and nationalist sentiment” and provides good suggestions as to how these new configurations may be methodologically approached.[4]

In the book’s introduction, Athique states that its primary purpose “is to support readers who are setting out to research transnational audiences in a wide variety of settings.”[5] His text is largely successful in this endeavor. Athique’s sophisticated analysis offers a number of entry points into the multilayered complexity of studying transnational audiences. It will serve as a worthwhile guide to those wishing to enter the academic conversation about transnational media and its reception.