Mia Consalvo’s new monograph Atari to Zelda: Japan’s Videogames in Global Contexts uses the framework of “cosmopolitanism” to account for both the global circulation of Japanese video games and the ways in which people as actors become more cosmopolitan through their engagement with this culturally specific medium. Spanning nine chapters—an introduction plus eight content chapters—along with notes and an index, this 259-page book attempts to engage with one of the cornerstones of “Cool Japan.” In the introduction, Consalvo notes through a series of research questions that the topic of Japanese video games is just too large. To narrow down the topic, she announces her intention to focus primarily on games in international contexts with an emphasis on US consumer practices. And to be sure, such an approach is much needed as the Japanese video game industry is one of the three largest in the world, along with the United States and Europe, creating and exporting games and systems for international enjoyment. 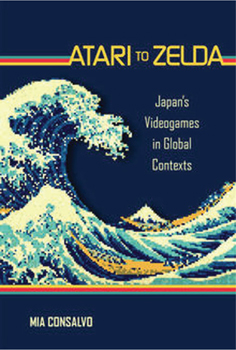 Consalvo begins the book with a quick narrative about how she came to the topic, an overview of her research questions, and then a quick literature review on cross-cultural aesthetic history that links Japan to the United States and other Western nations. Following this, she offers a reminder that Japan has often produced commodities with an eye toward the global market, and video games belong to this long tradition, which is imbricated in orientalist and techno-orientalist ideologies. At the end of the introduction, Consalvo clearly states her contribution:

Such an investigation adds to game studies’ understanding of our play history and the game industry, demonstrating the complex interplays that make it a global culture. Yet the work is also intended to contribute to wider theories of globalizations, culture, and cosmopolitanism.[2]

In chapter 1, “Playing with Cosmopolitanism: Japanese Videogames and North American Players,” Consalvo starts with the people who play Japanese games in the United States and Canada. Through a series of interviews, Consalvo finds that Japanese video games often serve as a gateway of sorts through which people develop interest in Japanese culture, going so far as learning Japanese or traveling to Japan. Most interesting in this chapter is the consideration of the Japanese-ness of a story. For her analysis of this, Consalvo depends mostly on anime scholarship, notably Ruh and Napier, to contextualize interviewee feedback about what they like about the flavor of the narrative. The challenge that Consalvo faces here is that the interviewees collapse all media to the source country and therefore discuss the Japanese-ness of Pokémon in the same section that they discuss Final Fantasy or even Silent Hill. All are very different genres pulling from radically different traditions, yet somehow essentialized into “Japanese” video games. This is no fault of the book; rather, this reflects a popular fan understanding about essential origin.

Consalvo adds to our fan understandings by considering the more prosumer, participatory fan communities engaged in Japanese video game translation in her second chapter “Unintended Travel: ROM Hackers and Fan Translations of Japanese Videogames.” These groups of hackers and translators find old games and prepare them for digital distribution in English-speaking markets, translating and patching the games to run on emulators. Using Final Fantasy as a case study, Consalvo argues,

Although Japanese games have been important for Western fans as a source of playful leisure, here the focus of play shifts. The act of hacking or translation becomes a way to play the game—but here play happens with the source code and original meaning.[3]

She then extends this argument throughout the chapter to note that hacking and translation (with a keen eye toward localization) establish a cosmopolitan ethos of production or shared production that figuratively and literally transforms a game.

Chapter 3 “Playing Japan’s Games” provides the easiest springboard for future research. Consalvo looks to the games themselves and through close reading attempts to establish the Japanese-ness of games with this specific origin. Considering a number of texts from visual novels to casual games, she writes about their aesthetics, gameplay, stylistics, and the themes contained therein. I appreciated Consalvo’s acknowledgement that people fetishize the origin: Japan equals Japanese. She offers, instead, the idea of Wittgenstein’s “family resemblance,” which attempts to identify complex networks of linguistic similarity, and then asks how such a framework might describe Japanese games. I skip here to chapter 5, “Localization: Marking the Strange Familiar,” wherein Consalvo returns to the topic of localization to consider official and unofficial efforts to bring Japanese games to global markets. Using Phoenix Wright: Ace Attorney and Recettear as case studies, Consalvo argues that localizers bridge several divides. Localization, then, might better be described as “culturalization” as the act of translation needs to account for puns, intertextuality, and even known and unknown objects. Localization, whether done by Intellectual Property (IP) holders, indie studios, or fans, is part of a cosmopolitan act that aids in globalizing culture, all made more possible through digital distribution.

Chapters 4 and 6 are more careful treatments of corporate practices. In chapter 4, “Much Ado about JRPGs: Square Enix and Corporate Creation of Videogames,” Consalvo considers Square Enix, creator of mega Japanese role-playing game (JRPG) franchises Final Fantasy, Dragon Quest, and Kingdom Hearts, to tease out how “glocalization”—strategically localizing within global markets—and corporate cosmopolitanism have enabled this corporation to enter and succeed in multiple markets. In concluding this historical treatment, Consalvo ends with a quotation from CEO Matsuda, in which he reflects that focusing on the global markets has functionally watered down the games, so much so that the games are not even successful in the local Japanese market. The tension introduced when consuming a nationally defined commodity is brilliantly highlighted in this conclusion and haunts the following chapter. In chapter 6, “The Japanese Console Game Industry: Capcom and Level-5,” Consalvo compares the histories of these two game companies to consider how Japanese game companies deploy their Japanese-ness in their development and marketing strategies. Particularly enjoyable in this chapter is how Consalvo describes the ways in which even Japanese companies fall prey to their own rhetoric about the uniqueness of Japanese culture and the wide cultural chasm between Japan and Western countries. This rhetoric, then, is used simultaneously by both companies to excuse failures in the global market and to celebrate successes—the root cause of both is Japanese-ness.

Consalvo returns to her introductory observations about intercultural influences in chapter 7, “A Game’s Building Blocks: Western Developers and Japanese Games.” Here, she presents her findings from her interviews with game developers, focusing on how Japanese games and design elements have influenced their development and industrial practices. Although Consalvo found evidence of more direct influences from games, she presents findings that point to a type of ideological design formation for which Japanese games play an important role. For this, she talks about the flow of ideas and inspirations flowing across games, moving away from the direct influences of Super Mario Bros. and Final Fantasy VII to games that exemplify particular design goals such as good storytelling. Thus, while “[v]ery little is ‘pure’ in terms of cultural origin relative to game creation or design,” Consalvo was able to collect qualitative data that did point to Japanese games and other media as tangible influences for game developers.[4]

In concluding her book, Consalvo speaks to the challenges of globalization and its effects on both production and the marketplace. Added to this, she briefly outlines the preferential differences between Japanese and US game players—Japan’s handheld market is more robust—which affects economic comparative analysis. Added to this is the tension between profit-minded companies and the ROM hackers and fan translators. Finally, Consalvo looks to the rise of indie game development and the doujin or amateur markets in Japan as new players in a type of Japanese-centered global cosmopolitanism. Consalvo concludes by returning to her main themes and theoretical lenses to summarize the book and then to briefly speculate on the future of Japanese games.

This book definitely belongs on any game scholar’s bookshelf. Game Studies as a discipline is still young enough that introductory books are powerful in setting research questions and need for further analysis. Consalvo touches on multiple aspects of Japanese games, from companies and creators, to the games as artifacts, to the people who play and modify them, speaking to the three touchstones of classic political economy. Any one of these chapters can be a book or a series of books; the questions and objects of study are robust enough to warrant more research. While reading, I hoped that Consalvo would engage with more scholarship from Japanese game scholars and Japanese media theorists. There seemed to be an overreliance on Ruh and Napier, two excellent sources to be sure; however, there is an active community in Japanese Studies who study Japanese games and would have provided useful historical and cultural context. Regardless, this lack does not detract from the value of this book, which attempts to analyze the newest instantiation of Japanophilia.