In 1991, Clyde Taylor published an essay in Wide Angle that artfully and systematically delineated what many scholars felt intuitively: that the form and politics of The Birth of a Nation (D. W. Griffith, 1915) were inextricable from one another.[2] Indeed, Taylor argued that the film’s racial politics held the key to its formal mastery, undercutting the often-taught position that Griffith’s technological achievements could be discussed in isolation from its objectionable representation of African Americans. This was not just a piece of polemic. “The Re-birth of the Aesthetic in Cinema” gave the field an accessible, concrete, and eminently teachable way to approach Griffith’s epic in all of its complexities without having to make excuses for or ignore key aspects of its significance. 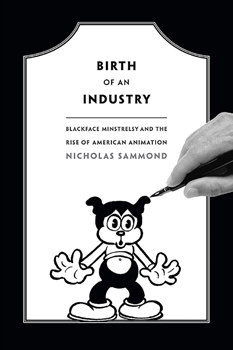 Like Taylor’s essay, Nicholas Sammond’s Birth of an Industry: Blackface Minstrelsy and the Rise of American Animation takes a “bad object”—in this case, blackface minstrelsy—and details its centrality to the rise of early American animation and, by extension, the development of the national film industry more broadly. Indeed, The Birth of a Nation haunts Birth of an Industry even if it garners no mention (an absence that reads as a deliberate gesture, given the book’s evocative title, and one that has a lexical effect that parallels the “vestigial minstrels” of his study). In this elegantly written, complex, and multifaceted tour de force, Sammond has given us a historically grounded and theoretically attuned analysis of blackface animation and its persistent uses, which runs throughout the history of moving images.

Sammond’s crucial intervention, as with Taylor’s reading of the racial structures in The Birth of a Nation, is to understand blackface in cartoons as “integral to the form.” In the most succinct version of this position, he writes,

[C]ommercial animation in the United States didn’t borrow from blackface minstrelsy, nor was it simply influenced by it. Rather, American animation is actually in many of its most enduring incarnations an integral part of the ongoing iconographic and performative transitions of blackface. Mickey Mouse isn’t like a minstrel; he is a minstrel. Betty Boop’s sidekicks, Bimbo and Ko-Ko, aren’t references to minstrelsy; they, too, are minstrels.[3]

This is an uncomfortable assertion, at least for those who want to believe in an innocence of animated characters that their history refutes, but it is a necessary one. It is also extremely well supported, and the convincingness of Sammond’s argument makes this book a major contribution to studies of the history of animation, of race and American media, and of the development of American cinema itself. Sammond demonstrates that “it is through the seemingly trivial that fantasies of blackness and whiteness circulate freely and with relatively little critical comment, stabilizing if not producing meaning.”[4] Cartoons have much to tell us about the racial dynamics of the nation’s self image and its attending anxieties.

Adding to the scholarship on animation industrialization and the role of self-reflexive gestures within cartoons, Sammond links these familiar tropes to blackface minstrelsy. He writes,

Since animation shares with minstrelsy as one of its fundamental tropes the regulation of unruly labor—as many blackface minstrel characters were based on a fantasy of the rebellious or recalcitrant African American slave or free person—understanding this simultaneous fascination with labor and with its discipline through racially charged characters is this study’s central project.[5]

Using the aesthetics of animation as its focus, the book

explores how fantastic performative relationships between animators and their minstrel creations modeled larger social and discursive formations in the United States, especially those perdurable racial fantasies that linked caricatures of African American bodies and behaviors to concepts of enthralled labor and its resistance to domination.[6]

In this way, Sammond uses animation as a means of accessing the broader, persistent, history of the United States’s “racial iconography and taxonomy.”[7]

The book is organized to reflect animation’s key trope of repetition; “the examination of cartoons encourages a repetitive mode of reading in which the same objects and practices are viewed from different vantage points, as different facets of the same object.”[8] The chapters, then, are each thematically structured around an organizing perspective: performance, the labor of cartoon creation, the alteration and regulation of on- and off-screen space, and the implications of minstrelsy on racial formation.

The Introduction traces the history of blackface minstrelsy through three distinct moments in American film from the early twentieth century to our contemporary day. By highlighting the persistence of blackface minstrelsy in American culture, this long view helps place the discussion of animation within a wider cultural context. It also gives the reader, perhaps more familiar with the history of animation than with minstrelsy, a primer in its forms and iterations. This ambition will make the Introduction useful for teaching subjects related to American racialized performance outside of animation per se, and especially for understanding contemporary iterations of blackface performance and their sheen of irony. In addressing these topics, Sammond nicely frames difficult questions bluntly: “If you perform racist behaviors and stereotypes in order to demonstrate their absurdity, do you deflate them or invest them with new life by de-stigmatizing them? Is the comic depiction of racism itself racist?”[9]

Throughout the chapters, Sammond focuses on “continuing cartoon characters” who were all trademarks for their makers and the studios behind them; it is remarkable, he argues, that all were minstrels.[10] Each chapter thus offers stunning readings of cartoons such as Bug Vaudeville (Windsor McCay, 1921), The Cartoon Factory (Max Fleischer, 1924), Steamboat Willie (Disney, 1928), Snow-White (Fleischers, 1933), Clean Pastures (Warner Bros., 1937), Mississippi Swing (Terrytoons, 1941), and Trader Mickey (Disney, 1932).

While the relationship between blackface minstrelsy and humor permeates the whole book, Sammond gives it special focus in the conclusion. Here, he explores the contemporary manifestation of the “expectations and anxieties around embodied authenticity,” thereby connecting the comedic self-reflexive “knowingness” of Tropic Thunder (Stiller, 2008) and its invocation of “authenticity” to a longer performative “fantasy of an authentic self that resides somewhere in the interstices of racial difference.”[11] These cartoon minstrels “perform a complex play of interiority and exteriority” that distinguishes them from the live minstrels of vaudeville and cinema.[12]

He also reminds us that blackface is not an embarrassing relic of performance history, but rather it has become “a surprisingly popular means by which to mobilize race as critique—for better or worse” in the so-called postracial present.[13] These recent examples (such as 30 Rock) are predicated on the very inequities they purport to disrupt and are therefore hollow gestures that end up reinforcing the systemic entrenchment of racialized hierarchies. As Sammond puts it plainly, “if one were truly post-racial, why would one perform race at all?”[14] Of course in the Trump era, any pretenses of postracialism have been proved laughable; it was a concept that was met with a stern side eye by most Americans attuned to entrenched racism, but it now seems quaint to think it was once celebrated as an achievement, as if the arc of racialized hierarchies that birthed blackface minstrelsy had found its resolution in the election of Barak Obama (who, notably, had his share of blackface imitators).

Sammond asserts that in these instances of blackface minstrelsy, “we witness iterations of an anxious and mutually constitutive process through which whiteness leans heavily on a fantastic and hyper-genuine blackness for its paradoxically inauthentic superiority.”[15] The question of how to read the persistence of blackface minstrelsy in the Trump era is an open one; if Sammond lacks a clear answer, he nonetheless provides the tools to approach such a question, noting that the very premise of “a shared investment in fantastic blackness as a liberatory force in democratic capitalist America, and the necessary backlash that requires its punishment for attempting exactly what has been asked of it” has skewed more toward punishment than toward liberatory force.[16]

In these ways, Sammond’s study will prove generative not only for scholars of race or of animation but for anyone approaching subjects ancillary to his main focus, whether that is media industry or audience reception. Sammond’s book does not lend itself to quantitative analysis, but it provides a necessary hermeneutic frame for those types of inquiries. Similarly, some readers might desire a more direct treatment of how contemporary audiences read blackface minstrelsy and its vestiges in cartoons, but that terrain has been well covered by scholars, and so Sammond can serve as a counterpoint. Indeed, he explicitly builds his analysis from the presumptive position of a critical observer: for example, looking at recurrent characters such as Felix the Cat and Mickey Mouse, Sammond asks, “why the gloves?”[17] The answer, of course, has to do with minstrelsy, even if it was not explicitly labeled as such.

A last note. In a moment where the status of the book as an object is in question, Sammond helpfully provides online access to a rich archive of cartoons, allowing the reader to directly and immediately engage with all of the works he discusses through the book’s digital companion (http://scalar.usc.edu/works/birthofanindustry/index). The site also includes additional materials concerning blackface minstrelsy, vaudeville, and animation, and provides historical and critical context for each media excerpt that complements the printed text.

The Birth of a Nation has haunted the American film industry—and the country—since 1915. With Birth of an Industry, Nicholas Sammond demonstrates that the specter of racialized caricature and its attending performative power dynamics have a longer and more pernicious continuum through which race, industry, and the nation understood and affected one another.