Film and media industry scholars have surprisingly few resources for studying the early business of Hollywood’s formation and pre-history. One older, but still sometimes useful source for such research is The Story of the Films (1927), Joseph P. Kennedy’s compilation of lectures given to business students at Harvard University in the mid-1920s by film industry insiders such as Will Hays and William Fox. Writing in 1928, however, George Kleine—a long-active, but by that time no longer significant motion picture distributor—argued to a colleague that the resulting collection was “grossly inaccurate both in statement and by inference. It consists largely of a series of self-exploitations.”[2] 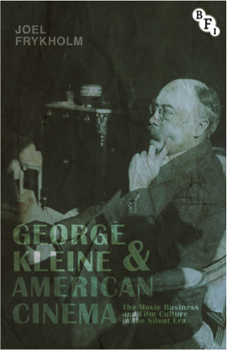 If history is written by the winners, as Kleine claims here, Joel Frykholm’s new book on Kleine instead is an extremely useful and highly readable history of one of the “losers.” While “neither a biography nor an exhaustive chronicling” of Kleine’s activities, the goal of this book is, in the author’s own words, “to join three storylines—a career history, and economic history/industrial history and a cultural history—into a unified narrative of how the institution of cinema took shape from its emergence to the end of the silent era.”[3] This agenda is manifest in the book’s title, and the order of priority provided by the subtitle—“the movie business and film culture”—is very much in place here; published as a part of BFI’s “Cultural Histories of Cinema” series, Frykholm nonetheless gives much more emphasis to understanding the development of the business of motion pictures.

The sole distributor in the Motion Picture Patents Company (MPPC), formed in 1909, George Kleine’s further activities in the film business remain little known, even to many scholars of America’s silent era. As such, Frykholm has contributed a significant and much needed “micro-history” (a term he borrows from Richard Maltby) of one of early cinema’s key players who stayed active throughout the history of American silent cinema. Justifying the book’s methodology, Frykholm claims that “we can unpack economic and industrial change by tracing how entrepreneurial choice and institutional rules interplay [and…] this allows for an inclusion of the entrepreneur as an analytical unit, which complements [Douglas] Gomery’s focus on firms and [Janet] Wasko’s interests in power relations and ownership.”[4] In writing such a history, Frykholm spends little time discussing the content of specific films, devoting his energies instead to the professional efforts of Kleine and the “limits and pressures” exerted on the entrepreneur by the business culture of American cinema across his thirty-year career.

The periodization of Frykholm’s history, from the mid-1890s to the late 1920s, allows him to cover a broad, but still contained, business history of American cinema. The result is an extremely well-researched and accessibly written history of the economic-industrial transformation of American cinema throughout this period, told from the admittedly-narrow perspective of one of its participants, though one whose story operates in reverse of the rags-to-riches arc of most protagonist-centered histories.[5] With film and media industries studies’ increased attention to distribution, George Kleine is in many ways an ideal match with current interests. Kleine’s more limited forays into both production and exhibition (though never as theater owner) provide this study with additional latitude to consider the changes taking place in those sectors of the business as well.

The book’s key contribution is its connection of the business of early cinema to the business of Hollywood; and the selection of Kleine’s career as the central conceit both warrants and demands such breadth. However, the use of Kleine as the structuring narrative also limits the book’s ultimate usefulness to media industries students and scholars: Frykholm’s principal account is not one of the process of industrial organization but rather Kleine’s various efforts and attempts to capitalize on the changing market(s) of American silent cinema. As such, the work supplements and complements, but is not a wholesale replacement for, other works on early Hollywood’s economic-industrial formation.[6]

To illustrate the degree to which Frykholm’s history here can be distinguished from (and needs to be complemented by) other “master narratives” of this era in film history, neither D.W. Griffith nor Birth of a Nation (1915) are ever mentioned. Choosing Kleine as his central focus produces an atypical trajectory through this era of American film history, one that starts at the center and moves increasingly toward the margins; but as such we realize how Hollywood came to operate by bearing witness to not only which business practices and strategies worked, but also—and especially—those that did not work.

Frykholm frames his study of economic forces primarily in relation to the work of Gerben Bakker, Michael Pokorny, and John Sedgwick. Frykholm’s discussions effectively make these economists of film more accessible to readers who are familiar with American cinema history but are less comfortable with complex economic graphs and concepts like sunk costs.[7] The potential converse of this is that Frykholm hitches his star significantly to the explanatory concepts developed by these economists. The degree to which individual scholars will find the book’s broader arguments convincing will be in direct proportion to whether or not they ascribe to the explanatory power and applicability of the paradigms these economists proffer to the formation of Hollywood. This is particularly true for kurtocracy, a highly uneven, “winner-take-all” economic environment that De Vany’s analysis of data from the post-studio era identifies as a defining trait, and which Frykholm appropriates to understand and explain the change in industrial conditions that increasingly pushed his businessman to the margins.

Frykholm’s book is made up of five chapters that both follow Kleine’s chronological progression through American silent cinema and subdivide that progression along the conventional historian’s lines. The first chapter progresses from the very beginnings of the film trade (mid-1890s) to the first true example of vertical integration in the MPPC’s expansion into distribution with the General Film Company (GFC). Frykholm’s critical contribution here is in his description of the economic understandings of film and the working mechanics of the business of motion pictures in its pre-Hollywood forms. Frykholm, for the first time, brings this together in a single work; and his first two chapters do much to make this easily understandable to students and scholars.

Chapter 2 presents Kleine’s introduction of Italian multi-reel feature films to the American market in 1913-15 as a critical step in the transformation of the dominant commodity of the motion picture business and the resulting change in practices and strategies. Chapters 3 and 4 form a conceptual pair—“After the Feature, Parts 1 and 2”. The first part focuses on the simultaneous development of “superfeatures” as the high-risk/high-reward element of Hollywood and the “volume and variety” of other films working to mitigate that risk. This chapter is quite useful to media historians interested in the development of, say, block booking or the A and B structures of Classical Hollywood. However, direct comparisons to such practices are largely missing; this does help Frykolm avoid certain teleological pitfalls (still suggested, nonetheless, by his kurtocracy argument), but it hinders its usefulness for scholars interested primarily in the product of this change and students less familiar with those later conventions of the film business.

“After the Feature, Part 2” (chapter 4) keeps the same periodization but instead focuses on Kleine’s conservatism as a businessman and the ultimate incongruity between his business ethics and the finance capitalism of Hollywood in the period of Wall Street’s financed battle for industry prominence. This period ultimately resulted in full vertical integration and oligopoly. The last major chapter—outside of a nine-page Conclusion and an Epilogue—shifts the focus somewhat from the economic conditions to the American film culture of the 1920s, defined here specifically in terms of a binary between the dominant commercial mainstream (Hollywood) and the a broadly defined non-theatrical cinema.

Frykholm’s book is easy to read, almost conversational in its tone. The author does a good job of explaining key terms, both economic and film historical, that may not be familiar to all readers. Similar to archival historians of early cinema like Richard Abel, his writing style draws in three to four examples to support every claim. While this demonstrates his exceptional archival work and is productive for teaching argument construction based in historical evidence, at times it becomes a bit redundant for the reader.

The volume comes in at the fairly typical 250 pages, with 169 pages dedicated to the body and fifty-five pages of endnotes (the five main chapters have an average of just under 200 endnotes each, a combination of citations and commentary). The text itself is fairly dense but contains approximately twenty-five images that include historical photos as well as period advertisements, trade press, posters, and production stills, but no economic charts or graphs.

This book is a needed addition to the history of American silent cinema, and will be particularly useful to film and media industries scholars, particularly historians. Chapters 1-2 should be required reading for scholars of early cinema; chapters 2-4 provide an exceptional, if supplemental, source for historians of (early) Hollywood’s industrial development; and chapter 5 actively engages in contemporary studies of non-theatrical cinema and will be useful to scholars and students of that field. In its entirety, this is a work that should be found on the shelves of scholars interested in early cinema, the history of motion picture distribution, or the origins and early development of the Hollywood film industry.

Copyright © 2016 (W.D. Phillips). Media Industries is an open-access, peer-reviewed, online academic journal. As such, we aim to participate in the open exchange of information. This work is licensed under a Creative Commons Attribution Noncommercial No Derivatives (by-nc-nd) License. Under this license, this work is available for sharing and noncommercial distribution provided the appropriate attribution is given.