David Church’s Grindhouse Nostalgia: Memory, Home Video, and Exploitation Film Fandom ranks among the most important contributions to a recent upsurge in historical studies of lowbrow Anglophone cinemas. Of course, book-length scholarly treatments of such output are not entirely new, representing a marginal yet nevertheless dynamic strand of Cinema Studies. Here, the paradigmatic work of scholars such as Thomas Doherty (teenpics), Kevin Heffernan (horror), Eric Schaefer (classical era exploitation), Linda Williams (hardcore pornography), and Linda Ruth Williams (erotic thrillers) have provided a particularly robust springboard for the interventions of the last half-decade or so. In this respect, Church’s book is representative of a growing body of historiography on relatively recent exploitation that also includes Mark Bernard’s Selling the Splat Pack: The DVD Revolution and the American Horror Film (2014) and Johnny Walker’s Contemporary British Horror Cinema: Industry, Genre and Society (2015), as well as my own Blood Money: A History of the First Teen Slasher Film Cycle (2011). 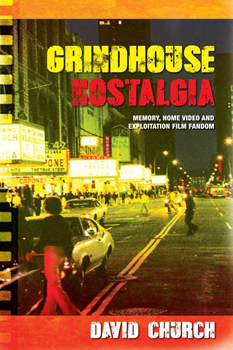 To this list can be added volumes of essays such as Merchants of Menace: The Business of Horror Cinema (Nowell, 2014) and particularly the forthcoming Grindhouse: Cultural Exchange on 42nd Street, and Beyond (Fisher and Walker, 2016), as well as those works that will ultimately comprise Bloomsbury’s recently founded “Global Exploitation Cinema” series. At the same time, Grindhouse Nostalgia’s accent on film circulation—including domestic delivery, marketing, and fan reception—positions it in relation to what now tends to be called the New Cinema History, following the publication of Explorations in New Cinema History: Approaches and Case Studies (2011) edited by Richard Maltby, Daniel Biltereyst, and Philippe Meers. In this respect, Church’s book can also be compared to works such as Kate Egan’s Trash or Treasure: Censorship and the Changing Meanings of the Video Nasties (2008), Matt Hills’ The Pleasures of Horror (2005), Barbara Klinger’s Beyond the Multiplex: Cinema, New Technologies, and the Home (2006), and to some extent Ramon Lobato’s Shadow Economies of Cinema: Mapping Informal Film Distribution (2012).

As its title suggests, Grindhouse Nostalgia is a study of how conceptions of a lowbrow cinema culture primarily associated with rundown urban theaters of the late twentieth century, such as those once famously lining New York’s 42nd Street, continue to resonate across various sectors of American audio-visual culture. As such, this book delivers rather more than its subtitle’s emphasis on fandom indicates. Sophisticated and apposite in his approaches to his objects of study, Church buttresses an analysis of industrial practices, media texts and paratexts, social conditions, and fan discourse with concepts drawn from studies of popular memory, nostalgia, and cultural taste and distinction. In so doing, he furnishes himself with a suitably flexible complex of analytical frameworks, allowing for a consideration of a broad range of sites in and across which contested memories of primarily 1970s exploitation cinema have operated, from production and content, to marketing and distribution, to popular reception, and even into the realm of the theoretical spectator.

Avoiding problems of repetition sometimes generated by chronological organization, Church instead arranges his book into four quite lengthy chapters, each comprised of multiple subsections. The first chapter focuses on the roles that ideas about drive-in culture—especially notions of class—play in late twentieth and early twenty-first century media and fandom. The second adopts a similar approach to understanding the nature of the resonances of mythologies of grind-house as exhibition space, social space, and as a partially diachronically formulated generic category. From there, Church considers the various ways that conceptions of 1970s exploitation cinema have been subsequently taken up by stakeholders involved in the production, circulation, and reception of what he calls “Retrosploitation,” a multivalent production trend that unfolded across the 2000s composed mainly of pastiches of earlier lowbrow fare including the Quentin Tarantino-Robert Rodriguez-helmed quasi-double bill Grindhouse (2007). The final chapter of the book considers the ideological dimensions of several key components of this trend, reading the content/themes and exploring the reception of subtypes, such as retro-styled Blaxploitation, rape-revenge narratives, tales of rural threat, and sexploitation films, in terms of their progressive and reactionary credentials.

Perhaps the most impressive aspect of this book is the broad scope and richness of insight Church packs into what at first sight might seem like a rather narrow topic. Accordingly, Grindhouse Nostalgia casts much needed new light on the very processes through which mainly 1970s exploitation has come to be imagined and reimagined as a cultural category. It also shows how this mutable and contested generic formation has been taken up in different media in different ways at different times. In this regard, the book offers something akin to a scholarly blueprint. It is one that could inspire others to consider how perceptions of cultural categories are activated across audiovisual cultures as various stakeholders shape and reshape media landscapes in selective and strategic fashion: a contribution that promises to extend far beyond the lowbrow and American audiovisual cultures considered in this particular study.

I consider Grindhouse Nostalgia to be a book demanding of multiple readings if one hopes fully to appreciate its full range of ideas and interventions. On the one hand, this testifies to the depth and nuance of the author’s insights, but, on the other, it can be seen to represent perhaps what some might consider a minor weakness. At times, it feels as though a little more attention might have been paid to the micro-structuring of the book, if only to help more firmly guide readers through the minutia of argumentation and implication. Church’s style is certainly elegant but also rather free-rolling, flowing at a break-neck speed that occasionally risks losing its truly groundbreaking contributions amid necessary asides and localized interventions. Yet, even so, there is perhaps something rather fitting about a study of phenomena returned to, reconsidered, and reimagined over time, which itself might demand returning to, reconsidering, and reimagining over time. Regardless, what is clear is that, recently published though it might be, Grindhouse Nostalgia is exerting a meaningful influence over understandings of its topic. Its impact is already attested to by its fully-justified status as a go-to reference point for scholars approaching grindhouse cinema. Nowhere is this clearer than in the aforementioned Grindhouse: Cultural Exchange on 42nd Street, and Beyond, a collection of essays whose indebtedness to Church’s findings bespeaks the latter’s quick-found status as a book destined to become a seminal work in the field.

Copyright © 2016 (Richard Nowell). Media Industries is an open-access, peer-reviewed, online academic journal. As such, we aim to participate in the open exchange of information. This work is licensed under a Creative Commons Attribution Noncommercial No Derivatives (by-nc-nd) License. Under this license, this work is available for sharing and noncommercial distribution provided the appropriate attribution is given.