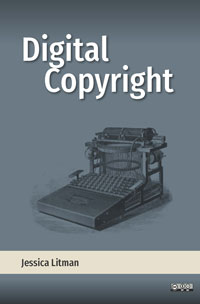 As of this writing, the future is murky. A wholesale reconceptualization of copyright law seems unlikely. Inertia may be the most powerful of all natural forces. Even if there were the energy and commitment to reexamine what copyright means, and how it should be structured to “promote the progress of Science and the useful arts,” adoption of a regime anything like the proposal I made in chapter 12 seems impossible.It isn’t only that it would take very public-spirited copyright lawyers to cooperate in a scheme designed to write them out of a job. Years of thinking within the peculiarly counterintuitive constraints of copyright law have a way of mangling one’s mind and distorting one’s imagination until more prosaic ways of seeing the world simply seem wrong.

There are not many Don Quixotes in Washington. The conflict over the scope of copyright in a digital age may have been fueled by differences in principle as much as narrow self-interest, but it is being fought in the usual way: representatives of private interests are simultaneously jockeying for advantage while offering to sit down at the bargaining table and negotiate a deal that they find satisfactory. Senators and representatives make general pronouncements about the importance of the issues raised and the need to find the right answer, while assuring the various interests that their doors are open and that they would be delighted to broker a negotiated solution.

I have gotten much more cynical than I used to be about this eagerness to be the member of Congress who secures a negotiated solution. I used to think that it derived primarily from a lack of congressional expertise or interest in the nitty-gritty of copyright laws. More and more, though, it seems likely that at least many of the legislators who seek to promote interindustry consensus are hoping to score a substantial portion of the money being poured into copyright lobbying. A dozen years ago, when I attended copyright hearings in the House and the Senate, they were perfunctory things. The chair of the subcommittee would open the meeting attended by one or two staffers. A couple of senators and representatives would poke their heads in long enough to announce that while the press of urgent business prevented their attendance, they would be sure to read the transcripts of the testimony with utmost care. The witnesses would begin to speak, with no one but the chair, the couple of staffers, and the lawyers for the other witnesses to listen. (Rarely, there were also press in attendance. They came out in droves, for instance, whenever the recording industry flew in one of its artists to testify about the need for stronger copyright laws. Senators and representatives tended to attend those sessions, too, at least so long as the celebrity—who always got to speak first—was at the witness table.) At one point, the chair would ask a pro forma question or two; somewhat later, he might yield the gavel to a newly arrived colleague and leave the room.

These days, congressional hearings are a little different. Senators and representatives still don’t appear to listen to the testimony. Indeed, it seems extraordinarily common for them to stay out of the hearing room until the witnesses have finished making their statements, and to slip in to their seats just in time to use their allotted five minutes to pose questions to the panel. I’m sure there are some legislators who think up their own questions, but there aren’t very many of them. Most of the questions seem quite clearly to have been written by a lobbyist for one of the groups affected by the legislation, and parroted by our elected representatives in order to get some statement or question into a record that nobody but lobbyists (and academics like me) will ever read.

After reading the prefabricated questions into the record and receiving a rehearsed response, the legislator, often solemnly, offers his services as a deal-maker. Affected interests looking for a bargaining table where they can sit in favored chairs may take him up on it, or seek to negotiate under the auspices of one of his colleagues. Thus is U.S. information policy crafted.

The solutions Congress adopts to the problems posed by the digital revolution, then, will inevitably be negotiated solutions. Individuals must trust to the public-spiritedness of the manufacturers of hardware and software, the telephone companies, the libraries and schools, the professional associations, the writers and organized consumer groups, and the civil liberties clubs—the interests, in short, who employ paid Washington lobbyists to speak up for the needs of unrepresented citizens. No wonder the copyright laws we enact come out the way they do.

There are not many Don Quixotes in Washington. No Mr. Copyright Smith to insist to his colleagues that the Congress needs to get it right because it’s the right thing to do. No lobbyist worth her not inconsiderable pay is going to stand up in front of the people she is hired to manipulate—oh, excuse me, I meant to say “persuade”—and cry out “Shame on you!” So the best available solutions are difficult ones.

One could hope that enough of the businesses and institutions at the bargaining table have some constituency among their individual customers and clients, or are subject to enough of the same concerns, to attempt to address some of their needs as well, if only in a derivative way. As solutions go, that one isn’t a very good one. It is hardly calculated to produce laws that are wise. The process is not, truth to tell, very attentive to promoting the “Progress of Science and the useful Arts,” and it has historically tended to do so only by accident. So it behooves the rest of us to look at our copyright laws with a more jaundiced eye. The information that is available in our information society and the uses to which it can be put will inevitably be shaped by the structure of our copyright laws. They are no longer laws only for specialists. If we can’t figure out a way to influence their form, they will shape what we are able to read, write, view, hear, and say in ways so insidious that we may not even notice what we’ve lost.

As I have watched the copyright wars intensify, however, it has seemed to me that consumers’ widespread noncompliance offers a very real ray of hope. I don’t expect large crowds of Napster-deprived citizens to rise up in civil disobedience against a law they perceive as unjust—even in the post-Napster world, copyright will not be a hot issue. Instead, I expect that most people will continue to ignore a law written in barely comprehensible prose that makes no sense whatsoever from their point of view. Without copyright lawyers to tell them that reasonable-seeming behavior is nonetheless illegal, even the most cynical of them will continue to believe that Congress intended the law to make sense, and continue to go about their business.

Copyright owners’ enforcement strategy so far has been limited to threats, litigation, and slick and unpersuasive campaigns to educate Americans to disapprove of unauthorized use. That strategy works well against commercial and institutional actors, and far less well in deterring individuals from engaging in undesired behavior. The music and motion picture industries have therefore concentrated on identifying and taking out intermediaries. What’s so frightening about the Internet is that in many contexts, intermediaries are, while extremely useful, nonetheless optional. A variety of applications have appeared to permit individuals to engage in precisely the same behavior that has inspired litigation, without providing any intermediary to sue. The glut of digital copyright lawsuits has only encouraged this trend. Thus, in order to actually enforce the rights that content owners claim the statute gives them, it will be necessary to enforce it against individual consumers. And here, widespread noncompliance will matter a great deal.

The less workable a law is, the more problematic it is to enforce. The harder it is to explain the law to the people it is supposed to restrict, the harder it will be to explain it to the prosecutors, judges, and juries charged with applying it. The more burdensome the law makes it to obey its proscriptions, and the more draconian the penalties for failing, the more distasteful it will be to enforce. The more people the law seeks to constrain, the more futile it can be to enforce it only sporadically. Finally, the less the law’s choices strike the people it affects as legitimate, the less they will feel as if breaking that law is doing anything wrong. In other words, if a law is bad enough, large numbers of people will fail to comply with it, whether they should or not.

People don’t obey laws that they don’t believe in. Governments find it difficult to enforce laws that only a handful of people obey. Laws that people don’t obey and that governments don’t enforce are not much use to the interests that persuaded Congress to enact them. If a law is bad enough, even its proponents might be willing to abandon it in favor of a different law that seems more legitimate to the people it is intended to command. Even if copyright stakeholders refuse to give the public a seat at the bargaining table, they may discover that they need to behave as if they had.