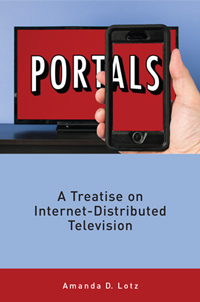 There is a story behind everything we write. The story behind this book is that it is an illegitimate offspring of the book I’ve been writing, The Cable Revolution. I wanted to tell that story to an audience broader than media studies academics and their students, so there were necessarily ideas and deep dives into theory that didn’t fit. In the process of thinking through what services such as Netflix meant to television, I discovered deeper questions about what internet distribution meant for the medium of television and how Netflix and other services were and were not like television—from an industrial perspective—and why. I dug into business and economics literature looking for insight into the peculiar business model that is quickly becoming pervasive among internet-distributed television services. Reaching intelligible answers required a lot of research that had no place in The Cable Revolution.

Writing up that insight started as an article, then it was two, and then I put them together because so much repetition was required. I ended up with something too long to be an article and too short to be a book, so I’m calling it a treatise, which matches its tone and provocative aspiration. It is also a conversation that doesn’t fit easily into a single field. I suspect media studies folks will find this a bit too business oriented, while, well, I’ll let the business folks draw their own conclusions.

In discussing a terrain that looks different every quarter, it is also necessarily incomplete and certainly partial. I offer a series of arguments about contemporary television meant to begin conversation and theory building. The focus here derives from my curiosity and thus continues an intellectual trajectory that emphasizes scripted television. Fascinating developments are occurring alongside those I investigate that are no less important (YouTube as an advertiser-funded version of internet-distributed television; live video and video redistribution by social media logics), but they are distinct enough to require their own treatises.

Its form and publication by Maize Publishing are experiments. Claiming it as a treatise seemed appropriate to its tone and brevity. Maize Publishing is an arm of the University of Michigan Press that exists for in-between things like this. Most basically, it is a lot like self-publishing, but without the parts most tedious for authors. An editorial board reviewed the project, but the manuscript did not receive blind peer review. I conducted my own peer review of sorts, soliciting feedback from colleagues, which was very helpful in revising the final draft, but they may have pulled punches more likely leveled in blind review. Thus, I’m particularly accountable for what follows, for better or worse.

My motivations for this unconventional path are multiple. First, I don’t have more to say right now, certainly not enough to flesh out into a proper book. Although the terrain for internet-distributed television may be clearer in a few years, this book can make a contribution to facilitating those conversations now. Second, the speed with which Maize Publishing could take this from a manuscript to a distributed final product suited the speed at which the topic I’m writing about changes. This is a project of the moment, and new editions and subsequent works will inevitably be needed.

Finally, I am keen for the experiment. I’ve spent a lot of time thinking about how digital distribution changes the creation and circulation of creative products. I usually think about this in relation to video, but my chosen medium of expression is the written word. Joining the leagues of amateur video distributors isn’t in my skill set, but I am curious to experience firsthand the reduction of intermediaries that digital distribution allows and see what this form of distribution allows me to learn about my readers.

What follows is certainly different than would have been the case had I waited a handful more years to publish a fuller account, but this intervention seemed needed. It is tentative in necessary ways, but deeply engages the six years of substantive internet-distributed television available.

With deep gratitude, I thank Josh Braun, David Craig, Dan Herbert, David Hesmondhalgh, Ramon Lobato, Aswin Punathambekar, and Ethan Tussey for notes on early drafts. My sincere appreciation goes as well to the University of Michigan Media Studies Research Workshop (and Jonathan Gray) and many others who have tolerated my geeky fascination with sorting this out. Thanks to Robin Means Coleman for making the time and intellectual bandwidth necessary available for this journey. I presented bits and pieces at the Inventing the New: Innovation in Creative Enterprises Conference at Northwestern University and at the World Media Economics and Management Conference, where I received valuable feedback and suggestions. I owe a considerable debt to Annemarie Navar-Gill who was an intrepid research assistant on The Cable Revolution and found some desperately needed information for this book as well. I am grateful for grants from the University of Michigan ADVANCE Summer Faculty Writing program and a Pohs Research Award in support of this project. My thanks to Jason Coleman and Allison Peters at Maize Publishing for their help bringing the project into the world. Sincere thanks as well to Rob Gingerich-Jones for creating the cover image, to Wes Huffstutter for being my business studies sounding board, and to Louis C.K. for inspiration.