Attitudes Toward Seeking Professional Psychological Help Scale-Short Form (ATSPPH-SF) is a commonly used measure of mental health treatment attitudes, but its reliability and validity in an Arabic-speaking population have yet to be established. The purpose of this study is to examine the theoretical structure and the psychometric properties of the Arabic version of ATSPPH-SF among university students. A sample of 519 students completed the study. Confirmatory factor analysis was conducted to assess the factor structure of ATSPPH-SF. The relationship between the ATSPPH-SF and stigma toward mental illness were explored to examine the convergent validity. The results indicate that the 10-item ATSPPH-SF had a single-factor structure. Additionally, the ATSPPH-SF had shown an evidence of adequate internal consistency reliability and convergent validity. This preliminary study supports using the Arabic version of the 10-item ATSPPH-SF.

Mental illness stigma and negative ATSPPH are reported in Arab populations where problems are usually addressed by the use of informal help strategies (i.e., talk to close friends or family) rather than mental health services (Rayan & Fawaz, 2018; Rayan & Jaradat, 2016). The ATSPPH among Arab university students have been investigated previously (Rayan & Jaradat, 2016), but having a reliable and valid tool to measure these attitudes has yet to be established. Arab populations are notably underrepresented in ATSPPH research studies and no specific tool has been adapted to their cultures. Yoon and Jepsen (2008) revealed that Asian students, compared to American students, reported less utilization of counseling and professional psychological help services. Therefore, when cultural differences and diverse semantic meanings of the scales given to participants are considered, it becomes crucial to have a culturally sensitive, valid assessment tool to understand potential differences in ATSPPH between Arabic-speaking populations and other cultural groups.

The ethical approval for the study was obtained from Zarqa University in Jordan. Students were informed about the purpose of the study and they were invited to voluntarily participate while assuring them that confidentiality and anonymity will be maintained. The researchers obtained informed consent from students and told them to contact the researcher for any questions concerning this study.

Eight Jordanian universities were selected randomly, four of them were private and the rest were public. Inclusion criteria were: (a) currently enrolled in the university; (b) a baccalaureate student; and (c) speaks Arabic as their primary language. A convenience sample of 519 students completed the study in the first semester of the academic year 2016-2017. Participating universities have an official online social network where thousands of undergraduate students have access to them. Utilizing the internet for data collection permits researchers to collect data and store surveys in a way fit for analysis, diminishing expenses and paperwork. Research has shown no significant difference in data quality when compared information collected online versus other methods (Birnbaum, 2004). In this study, a self-administered electronic survey was used by collaborating with web managers using Facebook; the managers within selected universities sent the consent form and survey via an online link to a convenience sample of students included on each Facebook page. Only 519 students completed the study out of 1634 students who were initially invited to participate.

Necessary precautions to overcome methodological limitations were considered in this study by allowing only one opportunity for participating students to access the online link given, and incentives were avoided to prevent several attempts by the same participant. The survey included a question asking "are you currently a university student?" Respondents who replied with "no" were not included in data analysis. Repeated records were removed by data filtering and participants were not allowed to submit any questionnaire with missing data.

The Social Distance Scale (Martin et al., 2000) is a 6-item questionnaire measures stigma against mental illness. It concentrates on the attitudes towards mentally ill patients by asking participants to rate the extent to which they are willing to interact with a person diagnosed with a mental illness. Scores on this scale range from 1 to 4, higher scores on this measure indicate higher stigma. The scale has Cronbach’s alpha values of more than 0.80, indicating very good to excellent internal consistency reliability (Link, Yang, Phelan, & Collins, 2004).

The ATSPPH-SF is a 10-item measure used to assess ATSPPH on a 4-point Likert scale, ranging from 0 to 3. Higher total score indicates more positive ATSPPH and is associated with lower levels of stigma against mental illness (Elahi et al., 2008). The ATSPPH-SF was reported to have unidimensional structure with Cronbach’s alpha values of 0.84. Construct validity was reported to be 0.87, which was estimated by correlating it with the longer version (Fischer & Farina, 1995).

A total number of 519 (360 females and 159 males) students completed study measures. The mean age of the participants was 22.39 (SD= 2.96), ranging from 19 to 35 years. Only 91 students (17.5%) were married. About 96% of the students have never received any psychiatric treatment. A total of 276 students (53.2%) were majoring in a non-medicine-related specialty and the rest were studying medical specialties: medicine, pharmacy, nursing, rehabilitation sciences, clinical psychology, and allied medical sciences. Data was collected in the first semester of the 2016-2017 academic year.

The original 10-item ATSPPH-SF was translated into Arabic and the comparability of conceptual equivalence and meaning of the items was assured. This tool was first translated into Arabic. Then, another two English language editors carried out the back-translation process from Arabic into English. After that, the translators met and confirmed the comparability of both forms in terms of conceptual meaning. One psychiatric nurse and one doctor in clinical psychology made the final review and accepted the Arabic version. Students who were involved in pilot testing reported no problem in understanding any Arabic.

The SPSS 21 program was used to analyze the data. Data screening was first performed to examine normality, missing values, and outliers or any errors in data entry. Cronbach’s alpha was used to estimate the internal consistency of the Arabic version of the 10-item ATSPPH-SF. Exploratory Factor Analysis (EFA) was used to assess whether the 10-item ATSPPH-SF would provide evidence for a 1-factor solution. Confirmatory factor analysis (CFA) was subsequently conducted to confirm the factor structure of the 10-item ATSPPH-SF among university students. When CFA follows an EFA on the same data set, they complement each other (Munro 2005). The goodness of fit index (GFI) and adjusted goodness of fit index (AGFI) were estimated to assess model fit. The maximum value for each of these indices is 1 and values more than 0.90 indicate a good fit (Wang, Fan, & Willson, 1996). Additionally, the overall model fit was assessed using the Root Mean Square Error of Approximation (RMSEA). A value of the RMSEA of about 0.05 or less would indicate a "close model fit", and values greater than 0.1 suggests rejecting the model (Browne & Cudeck, 1989). To assess the convergent validity of the 10-item ATSPPH-SF, Pearson’s product–moment correlations were conducted between the 10-item ATSPPH-SF and the social distance scale where negative correlations suggest adequate convergent validity.

A Maximum Likelihood Analysis was performed with the 10 items in the original ATSPPH-SF (Table 2). All of the 10 items were initially retained on one factor (factor 1). The 10 items accounted for a cumulative variance of 29.8%. The Kaiser–Meyer–Oklin (KMO) in the study model was 0.76, which is considered acceptable. The KMO is considered acceptable when it has a value of greater than 0.50 (Kaiser, 1974). Bartlett’s Test of Sphericity in this study was significant (P < 0.001), which supports that included items have a shared variance and reject the hypothesis stating that there are no common factors (Tabachnick & Fidell, 2012). The Cronbach’s alpha for the 10-item one-factor model of ATSPPH-SF in the current study was 0.72. Univariate and multivariate normalities were examined. Analysis of Moment Structure (AMOS, version 21.0) software examined multivariate normality of the data. All items had skewness values of less than 1 and kurtosis values of less than 2, suggesting the distributions of all of the 10 items in this study were normally distributed (Nunnally & Bernstein, 1994).

Table 2. Standardized Factor Loadings for the Items of the 10-item ATSPPH-SF

Confirmatory factor analysis (CFA) was performed using a Maximum Likelihood Analysis method of estimation to determine whether the hypothesized model fits the actual data set. For a better model over the hypothesized model, modification indices were consulted. CFA was frequently conducted as guided by modification indices and correlations between items and items residual variances (Table 3). However, no substantial improvement in the model was observed after deleting some items as guided by the modification indices, which led to retaining all of the 10 items (Figure 1). 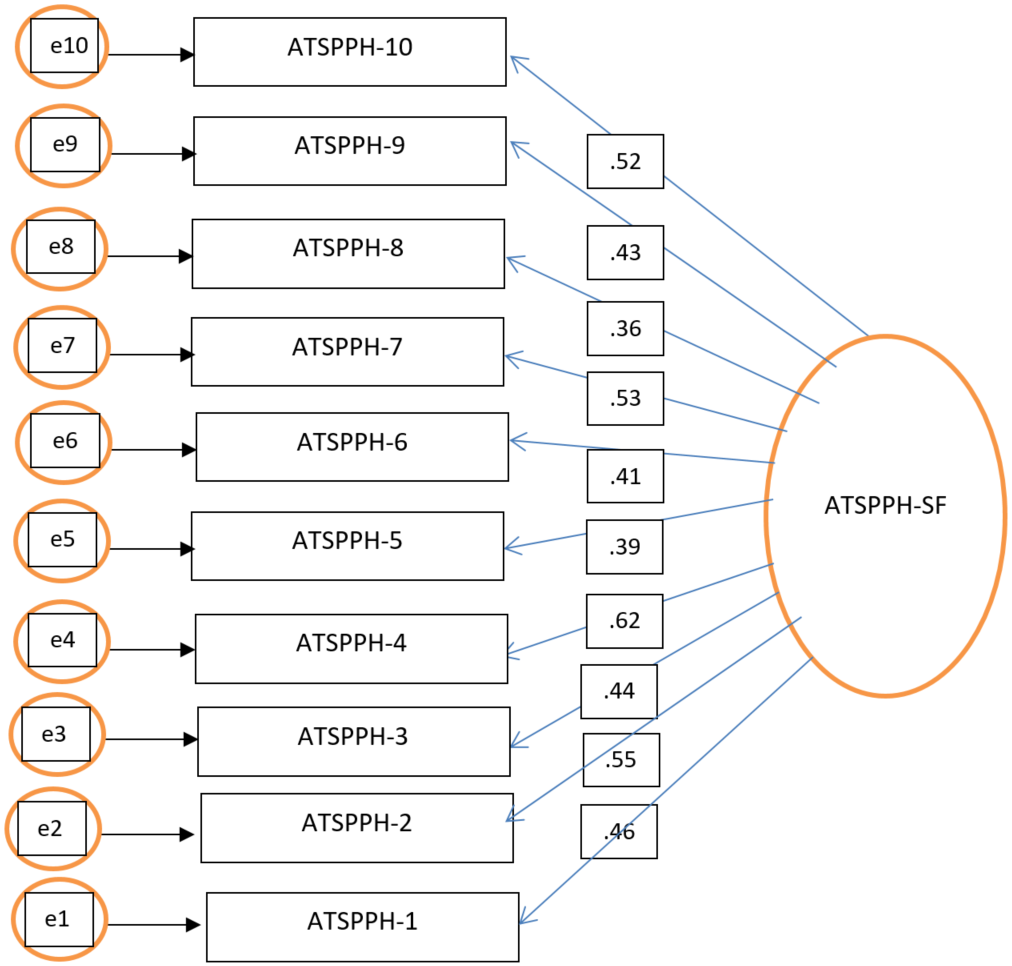 The 10-item model of ATSPPH-SF has good reliability and validity with Arab university students. Literature suggests that Arab cultural factors characterized by limited trust in the mental health professionals and the mental health services among the Arab population might limit their utilization of mental health services (Rayan & Fawaz, 2018; Rayan & Jaradat, 2016). However, there was a need to find a specific tool that measures ATSPPH. Such a tool would be helpful to correlate ATSPPH with various cultural misconceptions about mental illness, and develop relevant interventions that could change these attitudes. Arab students may belief to some degree in the importance of psychological help-seeking, but most of them do not trust psychological professional help providers. They might believe that social support and confrontation or talking to friends are better than professional psychological help-seeking (Rayan & Fawaz, 2018; Rayan & Jaradat, 2016).

Given the goodness-of-fit of the 10-item ATSPPH-SF, this tool can be used in Arabic-speaking populations. The good reliability coefficients of the Arabic 10-item ATSPPH-SF could indicate that these 10 items had a high percent of equivalence for the concept of help-seeking compared to that in Western cultures. Subsequently, the 10-item ATSPPH-SF could be used as an accurate measure to assess ATSPPH in Arab populations. The original 29-item and the 10-item ATSPPH-SF were originally developed to be used to be used among American samples that trust doctors and psychiatrists. Examples of items that reflect trust in psychiatric health care professionals and professional psychiatric help services are item 2, “The idea of talking about problems with a psychologist strikes me as a poor way to get rid of emotional conflict,” and item 4, “There is something admirable in the attitude of a person who is willing to cope with his conflicts and fears without resorting to professional help.” However, many Arab populations usually avoid seeking psychological help services due to the lack of knowledge about counseling, limited access to psychiatric services, and lack of trust in psychiatric health care professionals. These aspects might be associated with relatively low scores on ATSPPH-SF compared with to American samples.

The current psychometric study has a limitation of using quantitative analysis only. Future studies may want to examine specific themes using qualitative data to provide in-depth information. Despite this limitation, this study provided valuable data regarding the psychometric properties of the ATSPPH-Short Form to be used by health care professionals to assess ATSPPH among Arab populations.

Future research is needed to examine the test-retest reliability of the 10-item ATSPPH in Arab samples. Another recommendation might include examining the differences in ATSPPH in consideration of Arab cultural values or beliefs. Moreover, extending the outcomes of the study to various age groups or Arab peoples of other countries is also recommended.

This research was funded by the Deanship of Research and Graduate Studies, Zarqa University, Jordan.