/ American Muslim College Students: The Impact of Religiousness and Stigma on Active Coping

This study explored the relationships between the variables of stigma, religiousness, active coping, and religious coping in a sample of American Muslim college students. Structural equation modeling of data from 120 American-born Muslim college students indicated that there is a significantly negative relationship between stigma and active coping, and that the relationship between religiousness and active coping is fully mediated by religious coping. Implications of these findings are discussed in terms of mental health services and supports for American Muslims, and the authors make suggestions for future research.

One established view of serious mental illness currently rests within the recovery paradigm, which is based on the work of researchers such as Courtney Harding and colleagues (1987) and suggests that disability is not a continuous state, but is an experience from which one is capable of recovering. Recovery is defined as a journey with a trajectory that can be altered by various factors such as social support, sense of hope, and personal empowerment (SAMHSA, 2005). The approach an individual adopts in an effort to cope with their illness is associated with the empowerment component of recovery. One model of the coping process rests on two factors, approach and avoidance; the former involves an active orientation toward dealing with problems associated with mental illness, and the latter involves tactics oriented away from dealing with illness-related difficulties (Roth & Cohen, 1986). Various types of life stressors call for adopting either approach-oriented or avoidance-oriented coping strategies, with approach-oriented strategies being most efficacious for dealing with stressors that are controllable and persistent. Generally, utilizing approach-oriented (or more active coping strategies) has been tied to positive psychological and physical health outcomes in stressful circumstances, while avoidance coping has been tied to increased distress and chronic disease progression and mortality (Taylor & Stanton, 2007). Promotion of active coping is therefore in line with the recovery paradigm of mental illness.

One form of active, approach-oriented coping with mental illness is service utilization. Research indicates significant underuse of mental health services (Wang et al., 2005), particularly by ethnic minority group members (Sue, Cheng, Saad, & Chu, 2012), including American Muslims (Ball, 1995; Cochrane, 1983). Barriers to treatment that American Muslims face include a perceived lack of culturally competent professionals and issues related to social stigma (Basit & Hamid, 2010). Raja (2005) examined Pakistani-American Muslim men’s attitudes toward treatment-seeking and found that participants were reluctant to seek help for mental health issues due to a fear of the stigma associated with mental illness. Despite an increase in the availability of culturally competent mental health services, many Muslims remain wary of being labeled as a result of the stigma associated with seeking professional psychological help (Haque, 2008). Another study of Arab immigrant women who were victims of abuse found that a majority of participants felt shame in seeking formal mental health services (Abu-Ras, 2003). Some American Muslims may fear that mental health professionals will fail to understand the experiences of embarassment and vulnerability that often accompany disclosing emotional difficulties (Nassar-McMillan & Hakim-Larson, 2003).

On the other hand, studies on the effect of religion on health have yielded several important findings indicating that religion may be an asset for coping with serious health conditions. Religious involvement may be a contributing factor for increased longevity and improved health outcomes (Çoruh, Ayele, Pugh, & Mulligan, 2005) and also has stress-buffering effects in instances where people are experiencing multiple negative life events (Schnittker, 2001). Religion may also promote good mental health through increased social support and a healthier lifestyle due to religious prohibitions of unhealthy habits (Çoruh et al., 2005). Religious coping with depression has been perceived as being relatively effective (Loewenthal, Cinnirella, Evdoka, & Murphy, 2001).

According to the Gallup Survey (2009) American Muslims tend to be more religious than the general population; 80% of surveyed Muslims stated that religion is an important part of their lives, compared to 65% of the overall sample of adult Americans. Research suggests that Muslims in the United States who are young adults are likely more religious than their elders. Pew (2007) found that adult Muslims under the age of 30 are more likely than older Muslims to attend religious services, and younger adult American Muslims are also more likely to express a strong Muslim identity. For instance, 77% of American Muslims ages 18 to 29 report that they are religious, which is higher than the general American population (54%; Gallup, 2009). In a study of 18-to-25-year-old American Muslims, Ahmed (2009) found that they were more committed on average to their religion than were their non-Muslim counterparts. 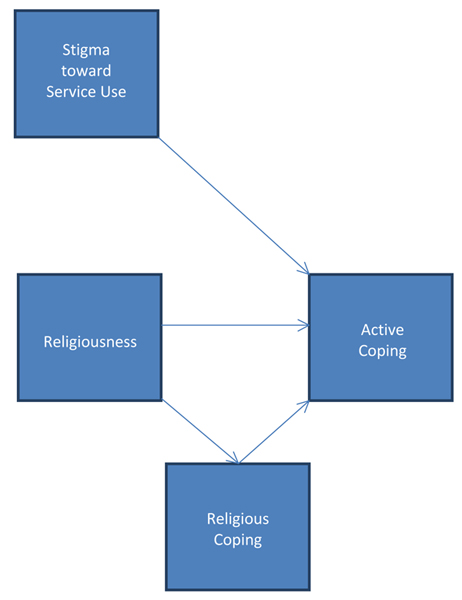 Participants for this study were 120 American Muslims who were undergraduates asked to complete an online survey. There were more women (75%) than men (25%). The most represented ethnic and/or cultural background was South Asian (n=59), followed by Arabs (n=26), and White Americans (n=13). There were 8 participants who identified as African-American or Americans from African nations. Participants also came from the following backgrounds: mixed race (n=6), Iranian (n=3), Afghani (n=2), Caribbean (n=2), and East Asian (n=1). In terms of racial and ethnic categories, participants add to more than 120 because some participants reported affiliation with more than one racial or ethnic group. Of the sample, 18 participants (15%) reported being converts to Islam. The mean age of the sample was 20.38 years (SD=2.15).

Participants were offered a choice of compensation for participation in the study: They could choose to receive no compensation, to have money donated on their behalf to a humanitarian agency, or to enter into a drawing for an Amazon.com gift card.

Stigma was measured using the five-item stigma subscale of the Attitudes Toward Seeking Formal Mental Health Services Scale (ATSFMHS; Aloud, 2004). This measure was adapted from the Attitudes Toward Seeking Professional Psychological Help Scale (ATSPPHS; Fischer & Farina, 1995) for a past study of the Arab-Muslim population in the United States. The stigma subscale of the ATSFMHS scale showed good reliability (α =.70) for participants in the present study. Items were answered on a four-point Likert scale (4=strongly agree). An example item is “A person would feel uncomfortable seeking mental health or psychological services because of others’ negative opinions.” Responses to the five stigma items were summed to yield a total score ranging from 4 to 20.

Religiousness was measured using the Sahin-Francis Scale of Attitudes toward Islam (SFS; Sahin & Francis, 2002). This scale is composed of 23 items measuring religiousness in Muslims and has been utilized successfully in studies of mental health (Francis, 2009). The SFS has also been effectively used to measure religiousness among Muslims in several different countries (Francis, Sahin, & Al-Failakawi, 2008). The SFS asks participants to select the most appropriate response to 23 statements regarding their religiousness. Response options vary on a 5-point Likert scale (5= agree strongly). Examples of items are “I find it inspiring to listen to the Qur’an” and “Attending the mosque is very important to me.” Possible scores on this scale range from 23 to 115. The SFS showed good reliability (α =.95) in the present study.

Religious coping was measured using the Brief Arab Religious Coping Scale (BARCS; Amer, 2005; Amer, Hovey, Fox, & Rezcallah, 2008). This 15-item questionnaire has been used previously to measure religious coping of Arab Americans and asks participants to read each item and select how often they engaged in specified behaviors when they experienced stressful situations or problems. Examples of items include “I prayed for strength,” and “I got help from religious leaders.” Responses vary on a 4-point Likert scale (4=used always). Possible scores on this scale range from 0 to 45. This scale yielded a Cronbach’s alpha of .89 in the present study, indicating good reliability.

Structural Equation Modeling (SEM) using maximum likelihood estimation in the AMOS 20 program was used to examine alternative models. Five indices were used to assess goodness of fit of the models: chi-square (χ2), Comparative Fit Index (CFI), Non-Normed Fit Index/Tucker-Lewis Index (NNFI/TLI), Root Mean Square Error of Approximation (RMSEA), and the Standardized Root Mean Square Residual (SRMR). Of these indices, only chi-square provided evidence of statistical significance. However, unlike most tests of statistical significance associated with chi-square, support for a proposed model is demonstrated with a non-significant value. Specifically, non-significance (p > .05) for a particular model indicates that the observed and reproduced variance-covariance matrices are not significantly different from one another. For the present study, common benchmarks, outside of the chi square, were used to interpret model fit indices: CFI and NNFI/TLI (.95 or greater), RMSEA (.05 or less), and SRMR (.08 or less; Kline, 2011). 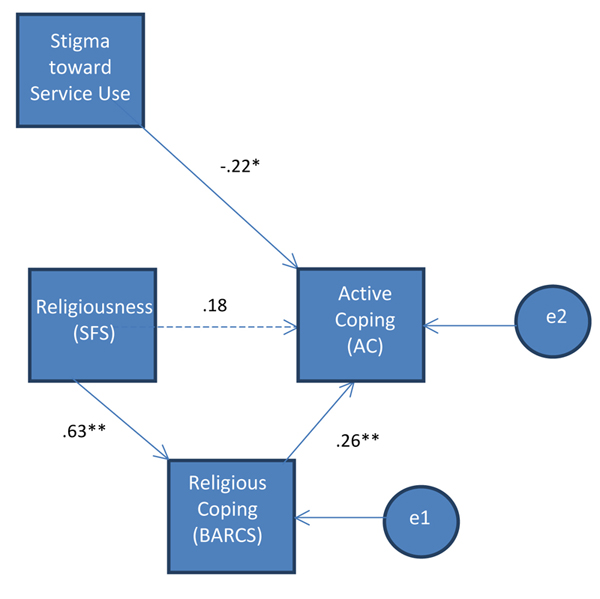 These findings substantiate claims that consideration of religion as a critical factor in mental health for American Muslims is important (Cinnirella & Loewenthal, 1999; Kobeisy, 2004). Additionally, these results seem to suggest that, despite the negative impact of stigma on likelihood of actively coping with mental health issues, religiousness may act as a buffer in the face of such stigma, promoting one’s likelihood of adopting active coping strategies by encouraging religious coping. The practical significance of these findings are clear, namely that in order to effectively work with American Muslims with mental health concerns, maintaining religion as a central consideration in the counseling process is essential for promoting recovery. Additionally, despite disparities in the use of traditional mental health services, caused in part by the stigma surrounding mental illness and seeking professional psychological help, these findings illustrate that American Muslims may adopt methods of active coping that go beyond traditional service settings, allowing them to avoid the label associated with such services.

Limitations of these findings include a small sample size and overrepresentation of women in the sample. Further, due to low sample size, multiple indicator measurement constructs could not be used in our path analysis. Future studies would benefit from addressing these issues. Future directions for research include a more detailed investigation into the impact of stigma on treatment seeking in the American Muslim population, as well as the possible impact of religion as a resilience factor, which might protect American Muslims from the harmful effects of stigma. Examination of the potential benefits of employing religion-based counseling techniques with American Muslims engaged in mental health services in order to improve treatment outcomes is of additional importance.