A few years ago I was invited to the Laurentian (Medici) Library in Florence where my host showed me a number of books from the 11th century. The books were quite large, with a relatively small amount of text and very wide margins that were filled with annotations written by many hands. My host explained that the books were used primarily as mnemonic devices. Teachers and students would stand around the volumes and use the text as a jumping off point for an oral conversation. The accretion of marginalia over time became a crucial part of the text as successive groups of readers worked together to deepen the collective understanding. 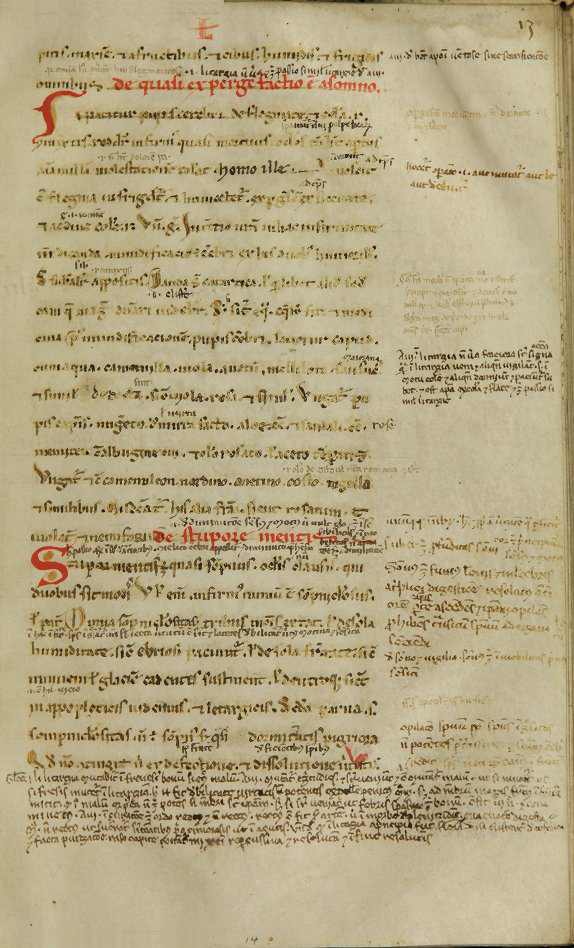 Although not from the Laurentian Library, this eleventh century medical book provides a good example.

Then along came print and the act of reading shifted slowly but surely from something done in real time with others to a nearly sacrosanct private behavior. As reading became a solo experience new forms of expression arose, most notably the novel in the sixteenth century which depended on the author communicating directly with the interior mind of the reader. What we gained of course was the rich literary tradition of the past five hundred years. But it’s also interesting to think about what we lost in the process. Print imposed a hierarchy with the author on–high and removed from isolated readers. Increasingly books became an end–point for individual consumption rather than a jumping off point for collective inquiry.

But just as print gave rise to the novel and the daily newspaper, new forms are emerging as expression shifts from pages to networked screens. Beginning with newsgroups in the early 1980s and blogs in the 1990s, the computer screen became a place for synchronous and asynchronous conversation. As web technology improved people started putting essays and books in a browser with a dynamic margin where readers could make comments visible to everyone.

Over the past ten years the experience of dozens of “social reading” platforms suggests that books will become places where people congregate to hash out thoughts and ideas.

One of the first initiatives in this area was a project we conducted at the Institute for the Future of the Book under the “networked books” rubric. Our first attempt, McKenzie Wark’s Gamer Theory, turned out to be a remarkably lucky choice. The book’s structure—numbered paragraphs rather than numbered pages—required my colleagues to come up with an innovative design allowing readers to make comments at the level of the paragraph rather than the page. Their solution to what at the time seemed like a simple graphical UI problem, was to put the comments to the right of each of Wark’s paragraphs rather than follow the standard practice of placing them underneath the author’s text. 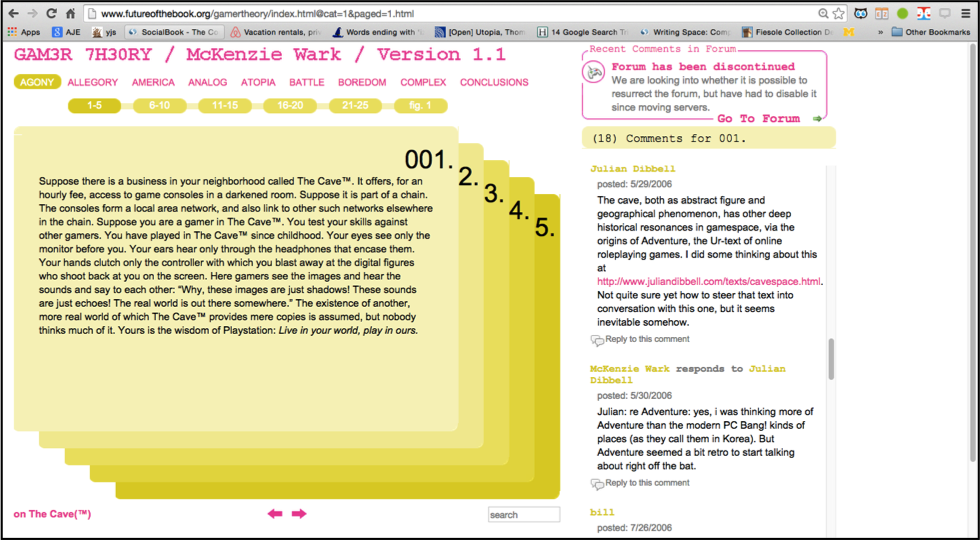 Within a few hours of putting Gamer Theory online, a vibrant discussion emerged in the margins. We realized that moving comments from the bottom to the side, a change that at the time seemed minor, in fact had profound implications. Largely because Wark took a very active role in the unfolding discussion, our understanding at first focused on the ways in which this new format upends the traditional hierarchies of print that place the author on a pedestal and the reader at her adoring feet. With the side–by–side layout of Gamer Theory‘s text and comments, author and reader were suddenly occupying the same visual space; which in turn shifted their relationship to one of much greater equality. As the days went by it became clear that author and reader were engaged in an energetic collaborative effort to increase their collective understanding.

In a later effort we asked seven women to read Doris Lessing’s Golden Notebook together, where a complex discussion emerged in the margins. 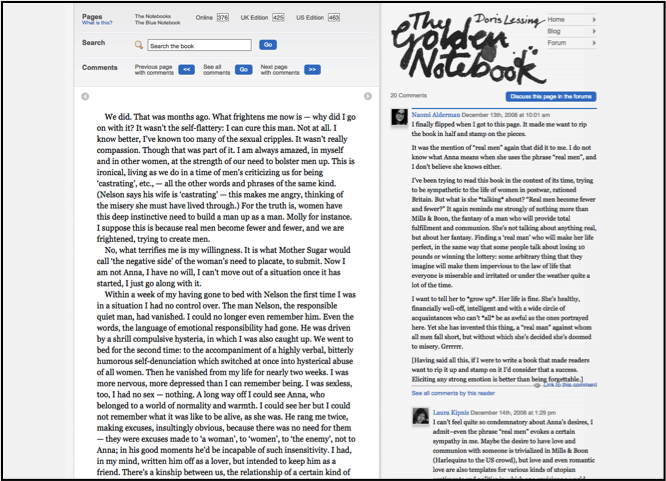 These experiments at The Institute for the Future of the Book gave rise to a concerted effort to build a robust commercial platform. SocialBook has now been in limited use for three years, mostly in educational settings. All the experience to this point confirms the notion that books are once again becoming places of vigorous collaborative inquiry. Here are two interesting accounts.

A professor at Hildesheim University (near Berlin) asked his students to read a difficult literary novel, Indigo by Clemens Setz, together in SocialBook. At a symposium held to discuss the experience, the students reported that they couldn’t imagine reading the book without the help they provided to each other in the margin; that the notion of content expanded to include their discussion as well as the author’s words. Setz, who monitored the readers’ experience in the margins claimed at the symposium that as reader interaction becomes intrinsic to the act of reading, writing styles would evolve to account for the increasingly active collaboration of writer and reader.

Three years ago, a secondary school teacher in NY asked the students in her Spanish literature classes to read their assignments in SocialBook. The teacher retired last spring, but three students who started with her in 2011 and were about to enter their senior year persuaded her to keep a part–time position so they could read Don Quixote with her in SocialBook. Now half–way through the text the three students and their teacher have made more than 2,500 comments—helping each other understand difficult passages, discussing a wide range of historical and literary questions raised by this seminal novel, and even creating a rich glossary of terms and concepts that are unfamiliar to contemporary Spanish speakers.

We consistently hear that students work harder when they read in SocialBook. Part of this is peer pressure, but it’s also that they quickly learn that thinking collaboratively is consistently rewarded as ideas are deepened and enriched by the interaction with others.

Social reading schemes like SocialBook have been designed to work with the output of the analog/print era, trying to figure out how to bring print culture with us in a way that respects the original but also enhances it in ways afforded by digital technology. Realistically there are much bigger changes in the offing as writers, artists, and designers begin to wrap their creative minds around new possibilities. My sense is that the future of creative expression is likely to be centered within what we now call gaming culture. Not only does the game industry not have any legacy product or thinking to hold it back, multimedia is already its language, and game–makers are making brilliant advances in the building of thriving, million–player communities.

Bob Stein is founder and Co-Director of the Institute for the Future of the Book and founder of The Voyager Company. For 13 years he led the development of over 300 titles in 'The Criterion Collection', a series of definitive films on videodisc, and more than 75 CD ROM titles including the CD Companion to Beethoven's Ninth Symphony, 'Who Built America', and the Voyager edition of 'Macbeth'. Previous to Voyager, Stein worked with Alan Kay in the Research Group at Atari on a variety of electronic publishing projects. 11 years ago, Stein started 'Night Kitchen' to develop authoring tools for the next generation of electronic publishing. That work is now being continued at the Institute for the Future of the Book.