This graphical article is a "virtual exhibition" of some of my visualizations. The day is not far away when on-line journals like JAHC will publish exhibitions of visualizations alongside written articles.

In an 1830 essay, Thomas Carlyle described the problems of writing about causation in history:

The most gifted man can observe, still more can record, only the series of his own impressions; his observation, therefore...must be successive, while the things done were often simultaneous; the things done were not in a series, but in a group. It is not in acted, as it is in written History: actual events are nowise so simply related to each other as parent and offspring are; every single event is the offspring not of one, but of all other events, prior or contemporaneous, and will in its turn combine with all others to give birth to new: it is an ever-living, ever-working Chaos of Being, wherein shape after shape bodies itself forth from innumerable elements. And this Chaos...is what the historian will depict, and scientifically gauge, we may say, by threading it with single lines of a few els in length! For as all Action is, by nature, to be figured as extended in breadth and in depth, as well as in length...so all Narrative is, by its very nature, of only one dimension; only travels forward towards one, or towards successive points; Narrative is linear, Action is solid. [1]

Carlyle is arguing here something that seems intuitive: that events and actions from the past are complex and simultaneous, and do not line up in a convenient sequential order. What might seem less intuitive, especially for historians, is the idea that part of the difficulty in capturing this complexity is the medium of prose itself.

Carlyle seems trapped by his medium of thought. It does not occur to him to think of Narrative in history in a form other than writing. He understands that writing is sequential, and that using prose to try to depict the Chaos of Being is like trying to envelop a sphere by wrapping a long string around it. He understands that writing is a one-dimensional medium, while the events he wishes to describe are multidimensional. It does not seem to occur to Carlyle, however, that he might use a different idiom, one more conducive to capturing multidimensionality.

Indeed, more and more information in cyberspace is taking visual and spatial form. Businesspeople, engineers, computer scientists and artists feel that complex visualizations are becoming the preferred medium of data transmission in cyberspace. There is every reason to suspect that as computers become an integral part of our professional lives, these data graphics will become an important part of the practice of history.

To qualify as an historical visualization, however, the data image cannot be simply added on at the end of the research process. That is, one cannot research and write a prose narrative and then sprinkle in graphics as a way to make the text "eye-catching," and claim one is engaged in "historical visualization." These graphics must be present at the conception of an idea, must be part of the initial phases of research, must guide the composition process, and must occupy a place of equal importance with written prose in the communication of that research to qualify as an historical visualization. Far from serving as a subservient illustration of the text, visualizations stand alongside prose; in some instances, the visualization stands alone as the final product of research. I eagerly await the day when the historical profession accords a rigorously composed, well-formed visualization the same legitimacy as a prose article.

This exhibition represents a step in that direction. On-line journals such as JAHC are an excellent venue for displaying data images and visualization of historical information. In addition to displaying some of my own visualizations, this exhibition is designed to explore the visual thinking process.

This visualization (Figure 1) represents my initial conception of an article on the similarities between historical writing and futurist scenario writing. My articles usually begin as ideas and concepts linked together into multidimensional webs and networks. Some describe this as analogous thinking—seeing resemblance amid difference—rather than linear thinking, which involves lining up ideas in linear, sequential order. After drawing out these analogous ideas and drawing the network of resemblances between them, only later do I try to connect them in linear, logical order through writing. I do not discard the visualization, however; as I revise and edit the prose, I am also revising and editing the image so that I may present both when time to publish.

I collaborated on a conference presentation on technology education with a colleague in engineering . These diagrams (Figure 2) were the center of that presentation and made their way into the subsequent article as well. Our approach to the study of technology involves looking at the design, construction and use of tools. In preindustrial societies, all three activities tended to be carried out by one person. In industrial societies, these actions are separated into separate functions carried out by specialists, with the tool floating outside the domain of any one group. Technology education as traditionally practiced mimics this pattern. We proposed a "post-industrial" form of technology education, where these skills are reintegrated. The engineer, David Cress and I drew preliminary diagrams on scratch paper; we then spent hours discussing, redrawing and redesigning the final shape of the diagrams on the screen. The images served as "cognitive objects" which guided our thinking and collaborative discussions; only after the diagrams were complete did we write an article in support of the images. Thus, the visualization was not a decorative feature added to the presentation, and the prose was, in effect, an illustration of the visualization 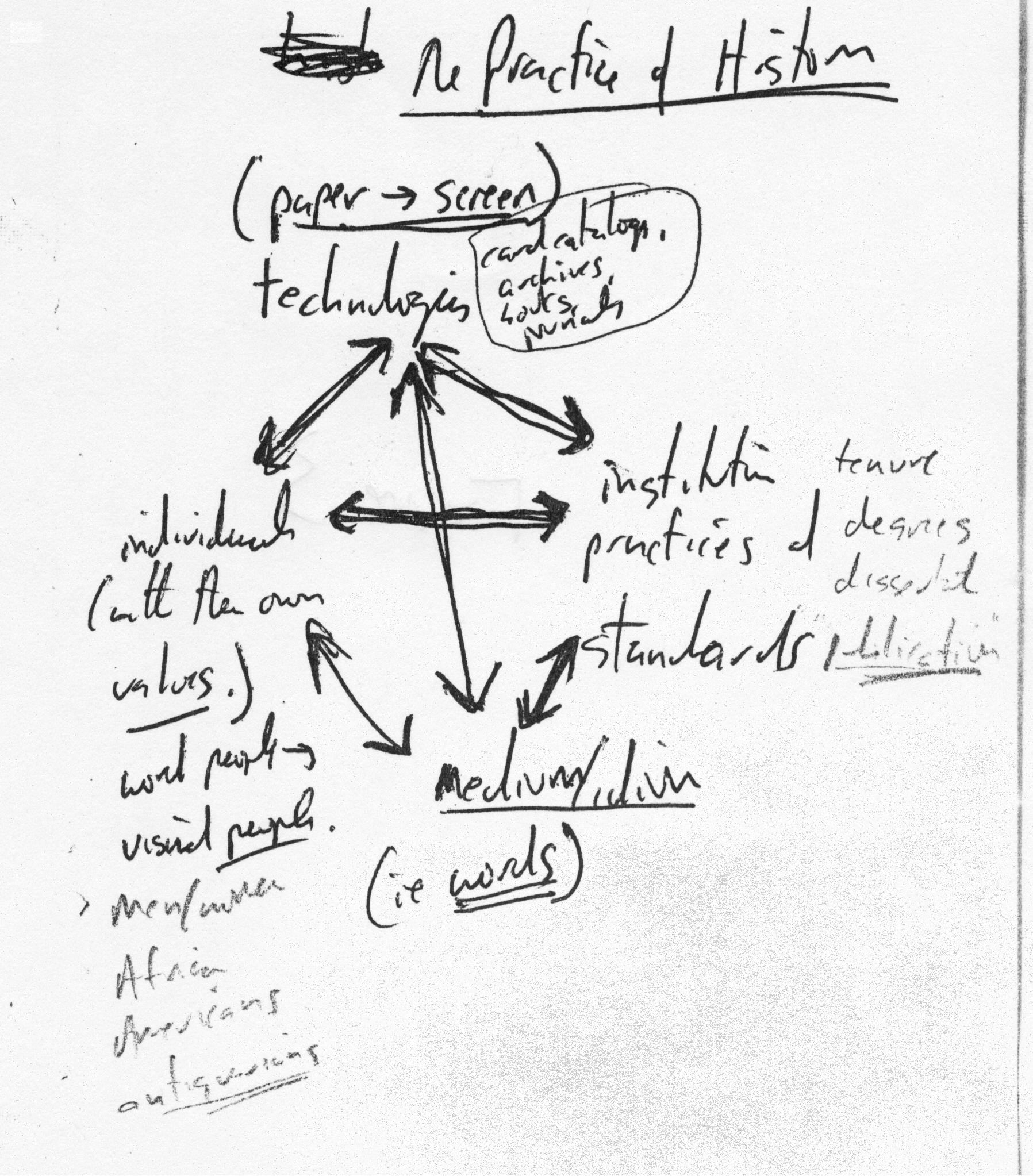 When trying to answer the question "will computers cause radical change in the discipline of history?" I wanted to be able to show 1) that technology has always been a part of the practice of history and 2) that changes in those technologies were insufficient to change everything about history, since technology made up only one part of the entire discipline. This is a visualization of the discipline of history depicted as a network of relations between technology, people, institutional standards and idioms of communication. I went through several drafts and revisions before settling on the final image. Like an engineering design, many of my visualizations begin their life as a concept scrawled on a napkin at lunch, which I later revise and edit for presentation.

The choice a visualization designer must make about the geometric configuration of the final design is an important historiographical decision. In the same way a writer must decide on the questions which will shape her account, the designer of a visualization must decide on a geometric configuration that best defines the shape of the account. New historiographic vistas are opened up when one challenges the geometric assumptions of an image designer. For example, visualizations used in the history of writing and other forms of communication often take the form of tree diagrams. The geometry of these designs asserts that communication forms have diverged from one another through time; the larger iconographic message is the triumph of alphabetic writing systems over all other types of communication. My argument was that writing systems were more alike than not-alike and were nestled in (not in opposition to) other forms of communication. In order to see this argument, I needed a new visual metaphor, not for decoration at the end of the article but as a cognitive object to guide my inquiry. The visual metaphor I chose was a continuum. I envision a day when historians will collect all such visualizations under the heading "the images of the field" to compliment the written "literature of the field." 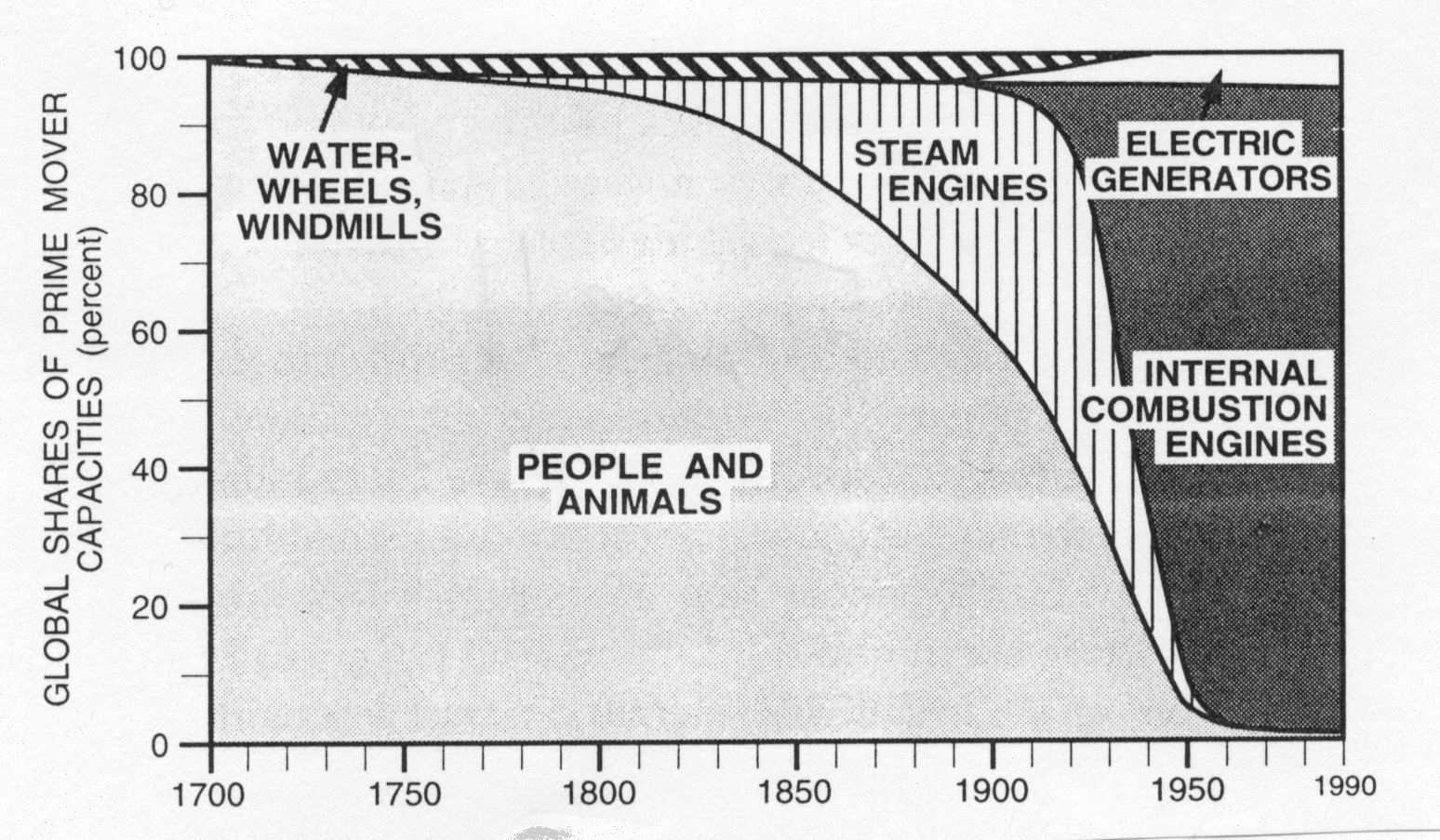 I was struck by this diagram in Vaclav Smil's Energy in World History (Westview Press, 1994): 230. I was concerned, however, that the diagram did not account for any regional variation in energy use. Industrial countries and pre-industrial countries surely did not alter their patterns of energy use in so uniform a manner. I redrew the visualization in three-dimensions, not two. (I believe that redrawing and reimagining a visualization is an historiographic move.) The extra dimension allows the viewer to see differences in space, not just time. Drawn in three-dimensions, it is possible and desirable (and with the aid of a computer, easier) to rotate the data image and examine the picture from various angles. Rotating our point-of-view allows us to consider the meaning of the data in new ways. I thought drawing the information in this way made the use of artificial power by industrial regions look like a tropical depression, falling downward not spiraling upward like a Whiggish "line of progression." Contemplating visualizations as cognitive objects yields new metaphors, new ways of thinking about the past.

07. Picturing the History of Japan:

I picture the history of modern Japan swirling around two "basins of attraction," the Meiji Restoration and World War II/Occupation. Events in Japanese history might be depicted as vectors: points in time and space whose meaning and significance is oriented toward the attractors. Perry's arrival in 1853 points toward Meiji; the Satsuma Rebellion of 1877 points backward as a reaction to Meiji. Note that the region between the two basins is a complex area, where the attractors pull events in both directions. This visualization is a way to see the relationship between events within the whole of Japanese history, to think about whole/part relationships simultaneously. Imagine an interactive computer display based on this model, where a viewer could view the whole, zoom in on a particular region or click onto one of the vectors to examine an event in further detail.

I use such drawings in all my classes. While reading a text on the history of economic thought, my students and I came upon this enigmatic sentence:

I asked the class to draw this idea, in effect, translating the words into pictures. My suggestion is the three-dimensional cone.

I will ask students to "Draw civilization," or "Draw the European World System after Columbus." Sometimes, I substitute these drawing exercises for formal essays, or have the essay serve as an illustration for the diagram. I do not consider these drawing exercises to be "dummied down" versions of history; composing such images requires the same type of understanding of the material necessary to design a written response to an essay question. In fact, as I have learned over the years, many students say they would rather write that draw their answers.

The day is not far away when journals like JAHC will publish a well-composed visualization as a separate article.