P.Herc. 817, containing the Carmen de bello actiaco, enjoyed its most recent, fully formal edition in 1958,[1] although Immarco published significant new scholarship toward a new edition during the 1980s and 1990s.[2] Benario's text offered the first ever English translation, but it did not involve any autopsy of the papyrus.[3] Nor did Zecchini's treatment of the poem's text, which results in highly useful commentary and significant analysis; but, it does not constitute a scholarly edition of the text.[4]

Until recently editors of the Carmen de bello actiaco worked with apographs, or disegni, drawn by hand to replicate the traces of ink and other features of the papyrus. Immarco used the binocular microscope to read the intractable papyrus itself. The recent application of digital infrared imaging technology – sometimes called "multispectral imaging" by mistake[5] – has made the text of P.Herc. 817 more accessible than ever before. These images produced by scholars at Brigham Young University have led to improved legibility of this and other damaged papyri.[6] The next edition of P.Herc. 817 will be the first that can be accompanied by trustworthy images for scholarly verification.

Some three decades ago Sedley stipulated that even the Herculaneum Papyri should be published in scientifically sound editions presenting all recoverable text and accompanied by accurate images of the papyrus for the sake of verification.[7] Other papyrological collections can meet this standard; but, the carbonized intractability of the Herculaneum Papyri, as is well known, often has made it impossible for scholars to include alongside their editions any images that one would regard as objectively sound. The digital infrared images of the papyri can help answer scholars' need to substantiate their readings in published editions.

The most substantial Latin papyrus from the Herculaneum collection was discovered, apparently, in 1752 and unrolled by Camillo Paderni in 1805.[8] The first coherent publication of its text, the hexameter Carmen de bello actiaco, appeared in 1809, in the second volume of Herculanensium Voluminum.[9] Nicolo Ciampitti's edition was introduced by a prefatory essay regarding the poem's authorship and its narrative content. An edition of eight columns of text, 47 verses in all, is set on two folio pages and features red-letter highlighting for the numerous conjectures. 8 pages of commentary conclude the edition. Ciampitti mentioned, but did not reproduce text from the several extant fragments of the papyrus' Latin text. Although disegni of the text's 8 principal columns[10] were drawn by Carlo Orazi during the scroll's unrolling and again by Giambattista Malesci in 1806,[11] the first edition of P.Herc. 817 presented no facsimiles to assist the reader in verifying the text.

The publication of facsimiles for P.Herc. 817 did not occur until nearly 80 years later. Orazi's apographs were taken to Palermo before the French occupation of Naples in 1806. At Palermo between 1807 and 1808, under the direction of John Hayter, copperplates were incised then shipped to England and archived with the facsimiles at Oxford's Bodleian Library. The papyrus remained in Naples throughout. Walter Scott's Fragmenta Herculanensia: A Descriptive Catalogue of the Oxford Copies of the Herculanean Rolls (Oxford 1885) offered curious readers their first glimpse at any semblance of the original texts.[12] Baehrens had requested and used impressions from Hayter's plates during his preparation of his Poetae Latini Minores (Leipzig 1879), and thereby distinguished his edition in Scott's esteem, especially.

Facsimile drawings of the Herculaneum Papyri served scholars for much of the interim between Orazi and the end of the 20th Century. In 1890, the Oxford Philological Society distributed photographic copies of the apographs in their possession and placed sets in "five of the leading libraries" in Europe.[13] Other attempts were made to photograph the papyri themselves – indeed, in 1971–1972 a significant project was undertaken by C. Bertelli of the Gabinetto Fotografico Nazionale – and sometimes excellent results were achieved. The carbonized papyri remained generally difficult. Indeed, two of the most prized monographs of Herculaneum papyrological scholarship – Obbink's Philodemus De Pietate, Part 1 (Oxford 1996) and Janko's Philodemus On Poems, Book One (Oxford 2000) – reproduce examples of black-and-white photographs of representative texts. In the 1980's Knut Kleve began applying photographic techniques toward verification of difficult texts. Using a ring flash, macro-lens, and fine-grain slide film, Kleve captured thousands of individual images of the collection. Then, using a special microscope, Kleve could trace by hand the letters he read from the micro-slides.[14] The results of Kleve's painstaking renditions have been published along with his editions of P.Herc. texts made newly accessible by his technique.[15] Despite the scholar's best efforts at objectivity, Kleve's facsimiles from the micro-slides are nevertheless as much subject to human error as are other drawings: they may substantiate a papyrological text, but they do not fully answer the call for an utterly subjective verification of the original. The novel approach aimed at an old objective: facsimiles for verification of text that only an individual scholar could see.

Early in the century, Ferrara had reproduced the "Hayter" apographs of all fragments of P.Herc. 817 in the 13 plates of his edition.[16] Garuti edited P.Herc. 817 in 1958 and supported his text with facsimile drawings of a novel and most unusual sort.[17] Preceding the printed text, Garuti's edition presents 18 pages of facsimile drawings that illustrate the surviving fragments. Garuti's drawings are not nearly as crisp as the reproductions in Ferrara's text. Where both Neapolitan disegni and Oxford apographs are extant, Garuti reproduces by hand his own facsimile of each and also provides a composite of the two together. The resultant product is a hybrid of what Garuti can divine from what two different disegnatori saw on two separate occasions. Thus, for instance, for his Fragment 10, Garuti sketches Orazi's Oxford apograph called Ms. gr. class. 7.1632α beside his sketch of Cozzi's Neapolitan disegno of "Frammento 1" to produce a new facsimile called "10 (1632α = 1)." The editor's care notwithstanding, the attempt to present verifiable evidence for the reader seems woefully subject to overwhelming subjectivity, a sure formula for futility. Still, Garuti's determination to produce a full edition of the Carmen de bello actiaco is laudable. 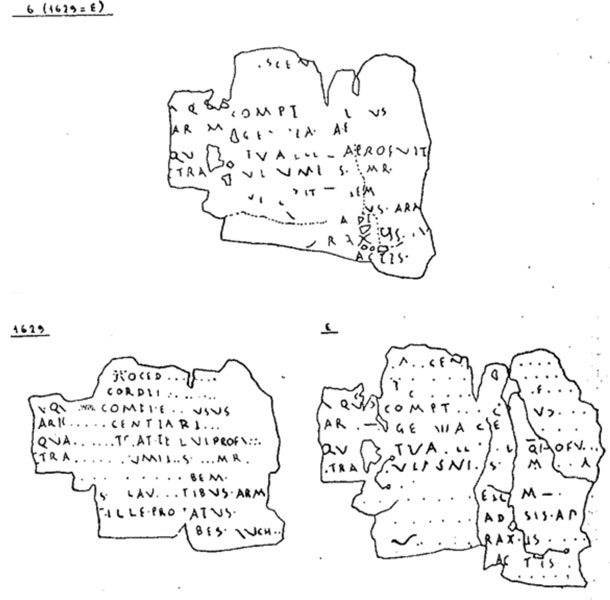 Garuti rendered the ninth line of the text on this fragment by preferring Orazi's drawing in O over Cozzi's in N,[18] and he printed ILLE PROFATUS, even though the synthesized facsimile (Fig. 1) suggests another preference. Autopsy of the original fragment at this point should lead to reading the text as VOMERE RAPTOS, as the BYU image (Fig. 4) can verify most readily. Both N (Fig. 2) and O (Fig. 3) reflect individual traces that are actually found on the papyrus; but neither drawing confirms the full truth of the passage. Human error has intervened.

The application of space-age technology has improved Herculaneum papyrologists' chances for placing beside their editions a facsimile of the original papyrus. The advent of the technology does not solve all the challenges of these texts. A persistent truth is that "the charred papyri [from Herculaneum] – preserved in various states of disarray, fragmentation, and physical deterioration sustained over two millennia – are among the most difficult ... to edit."[19] However, the newest imaging techniques are capable of "restor[ing] full legibility to papyri so black that the human eye can discern no ink whatever."[20] The images produced by this process are easily read on a computer screen, copied to other electronic applications, or recorded on printed media.

It is critical to emphasize that facsimile images cannot displace the all-important consultation of the original documents they reproduce. Even infrared images of papyri that to the naked eye are almost illegible for their carbonization fail to recreate the three-dimensional artifact.[21] They are at best another tool for encountering the original and demonstrating results.

In ingenious hands, these tools have been applied quite gainfully. Gianluca Del Mastro was first to illustrate scholarly findings using the infrared images captured by Steve Booras of the BYU team.[22] Del Mastro's publication was especially innovative for his having used mathematically precise measurements to predict the location of disparate traces of ink from across the ravaged surface of his papyrus and reposition them in a digital environment. This scholar's ingenuity took him one step beyond the using a reliable facsimile for verification of a conjectured text; the image became a means to proving a hypothesis. Since 2001, other scholars have applied the digital images with similarly impressive results.

Daniel Delattre has recently published Philodemus' treatise De musica 4, the first major edition of a Herculaneum text to be supported by the BYU images.[23] Delattre's two-volume text is accompanied by a CD-ROM that is comprehensively outfitted with various photos, facsimiles, and digital reconstructions.[24] Individual images on the disc serve the purpose of verifying the editor's readings. Collectively, though, the package is equal to more than the sum of its parts. For this tool, designed by Delattre and Laurent Capron, supports further research into the several constituent papyri that comprise the Philodemus' text.

The facsimiles themselves have become more readily available to scholars everywhere through two recent initiatives. Enzo Puglia envisioned, that "nell'era dell'informatica multimediale, anche i dati relativi ai papiri dovrebbero essere attingibili con strumenti più rapidi ed efficaci dei tradizionali supporti cartacei."[25] To that end, Oxford's Imaging Papyri Project has coordinated with the Bodleian Library to make available on the internet both lo- and hi-resolution images of all the Oxford Herculaneum apographs.[26] Brigham Young University has worked with the Biblioteca Nazionale di Napoli to scan all the Neapolitan disegni in 300-dpi 16-bit color images.[27] It is hoped that, in the near future, clearances can be arranged that will facilitate more immediate and universal access to the Herculaneum papyri and the many ancillaria that will further research into them.

The term "multispectral imaging," applied by researchers at Brigham Young University, is a digital imaging technique that captures a series of images of an identical target at various wavelengths of light. In that particular sense, the technique that was applied, by and large, to the general collection of Herculaneum Papyri at the Italian National Library between 1999 and 2004 could not properly be called multispectral, even if the equipment they used had full multispectral capabilities. The imaging team captured well above 30,000 individual images as they digitized every available unrolled papyrus and fragment archived at the "Marcello Gigante" Officina dei Papiri Ercolanesi. This included the pieces of P.Herc.Paris 1 and 2 that were on loan in Naples from the Institut de France. Coverage of such complete breadth was made possible by the decision to limit the depth of the imaging sequences. Results confirmed early on that the physical characteristics of the Herculaneum scrolls yielded especially positive responses when imaged in the wavelengths around 950 nanometers. There the reflectivity of the carbonized ink is easily distinguished from that of the carbonized papyrus. The team found good results and replicated them across the collection.

Since the BYU team finished its capture of the P.Herc. collection in Naples with a brief visit in the Autumn of 2004, all its subsequent imaging projects have engaged the true range of multispectral imaging. These include some Herculaneum Papyri, namely P.Herc. 118 = Ms. Gr. Class. b1 (P)/1–12 in Oxford's Bodleian Library, P.Herc. 1042 = BL inv. 1521 and P.Herc. 1149 = BL inv. 117 at the British Library. Only P.Herc. 109 which is at Copenhagen has not been imaged in the BYU project.[28]

Other collaborators with whom the BYU team has applied full multispectral imaging include the Center for the Tebtunis Papyri at the University of California at Berkeley, Oxford's Oxyrhynchus Papyrus Project, the Petrie Museum of Egyptian Archaeology at University College, London, the Thessaloniki Archaeological Museum and the Institute for Philosophical Research at Patras. Archaeological applications of full multispectral imaging have also yielded positive results at such far-flung places as Santorini (Thera), Meso-American sites, and the pilgrimage cave at Khirbet Qana in the Galilee. In each of these venues and for each of its texts, the BYU team has gathered a full range of photographic data, which is collected across the full range of the light spectrum.

Current initiatives for processing and utilizing that range of data are adumbrated in the paper by Stepp and Ware in this same conference (pp. 733–746).