Images of fire-swept landscapes and smoky orange skies resemble the horrific coming of the apocalypse. As fires burned across the West Coast, thick plumes of smoke spread thousands of miles from the Pacific to the Northeast, and flames threatened the historic Mount Wilson Observatory, the Los Angeles Times front page read: “California’s climate apocalypse. Fires, heat, air pollution: The calamity is no longer in the future—it’s here now.”[1] 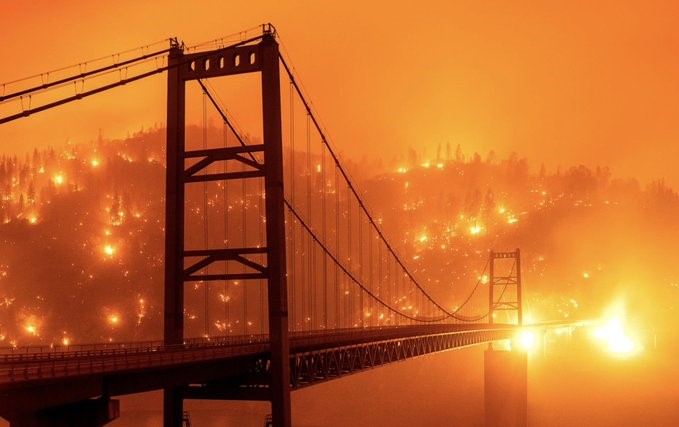 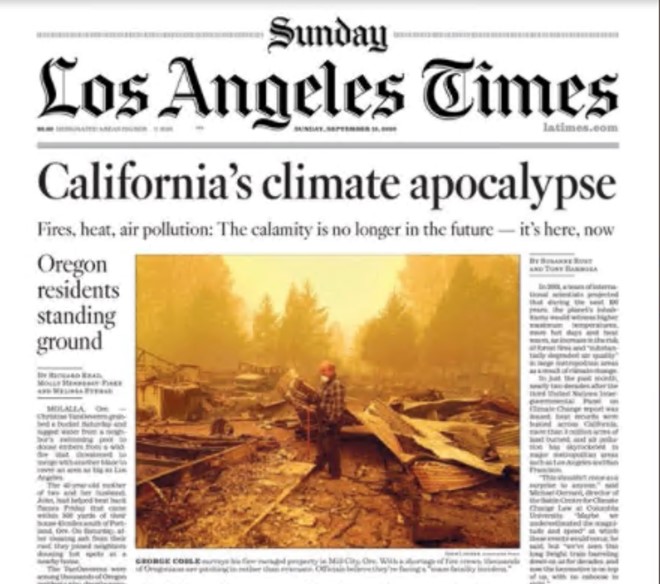 “Climate Apocalypse. It’s here, now,” citizens, activists, environmentalists and politicians voiced outrage, tweeting: “As wildfires rage, smoke causes unsafe air across the west, and months of fire season lay ahead, Climate Change can’t be denied. But the administration rejects reality,” criticizing Washington’s failure to act and urging Americans to vote in 2020.[2] Bernie Sanders warned, the “largest wildfires in California's history continue to rage. The sky on the West Coast turned red & orange,” calling for a Green New Deal rather than a president “who rejects science and calls climate change a hoax.”[3] Others expressed dismay: “Feeling kinda bummed, can’t tell if it’s because of the raging pandemic, the rise of fascism in America or the incipient collapse of the planet’s ecosystems.”[4]

As the world burns, 200,000 Americans die from Covid-19, and citizens are killed on the streets like a dystopian noir movie, people across the nation protest that ‘Black lives Matter’ as the 2020 election approaches.[5] These events reveal how important it is to vote in 2020 and the extent to which change is needed. Brian Neve has examined film and politics in America.[6] Politics infused Mr. Smith Goes To Washington (1939), His Girl Friday (1940), Citizen Kane (1941), All the King’s Men (1949), The Man Who Shot Liberty Valance (1962), The Manchurian Candidate (1962), Now! (1965), All the President’s Men (1976), Milk (2008) and Suffragette (2015). In a digital ‘new media’ era with a global pandemic shuttering theaters and necessitating remote (rather than in-person) political conventions, the screen itself has been democratized as citizens stream media on YouTube, Roku, Twitter and cell phones. Films and media—from Hollywood cinema to independent films, political campaign video ‘mini-movies’ and social media—have harkened back to the civil rights era to ‘cinematize’ and ‘musicalize’ the quest for social justice and the effort to further democracy.

As we mourn the loss of our heroes, I was devastated to hear of the passing of the great Supreme Court Justice Ruth Bader Ginsburg, who fearlessly championed women’s rights and civil liberties, cinematically honored in RBG (2018) and On the Basis of Sex (2018), available to stream on Amazon. The nation recently mourned the passing of legendary civil rights icon John Lewis, who experienced firsthand the violent brutality of racism while putting his life on the line fighting for the right to vote. Lewis expressed concern that America’s democracy is in danger, yet insisted in the film John Lewis: Good Trouble (2020) and on Twitter: “Do not get lost in a sea of despair. Be hopeful, be optimistic. Our struggle is not the struggle of a day, a week, a month, or a year, it is the struggle of a lifetime. Never, ever be afraid to make some noise and get in good trouble, necessary trouble” and stand up for social justice.[7] 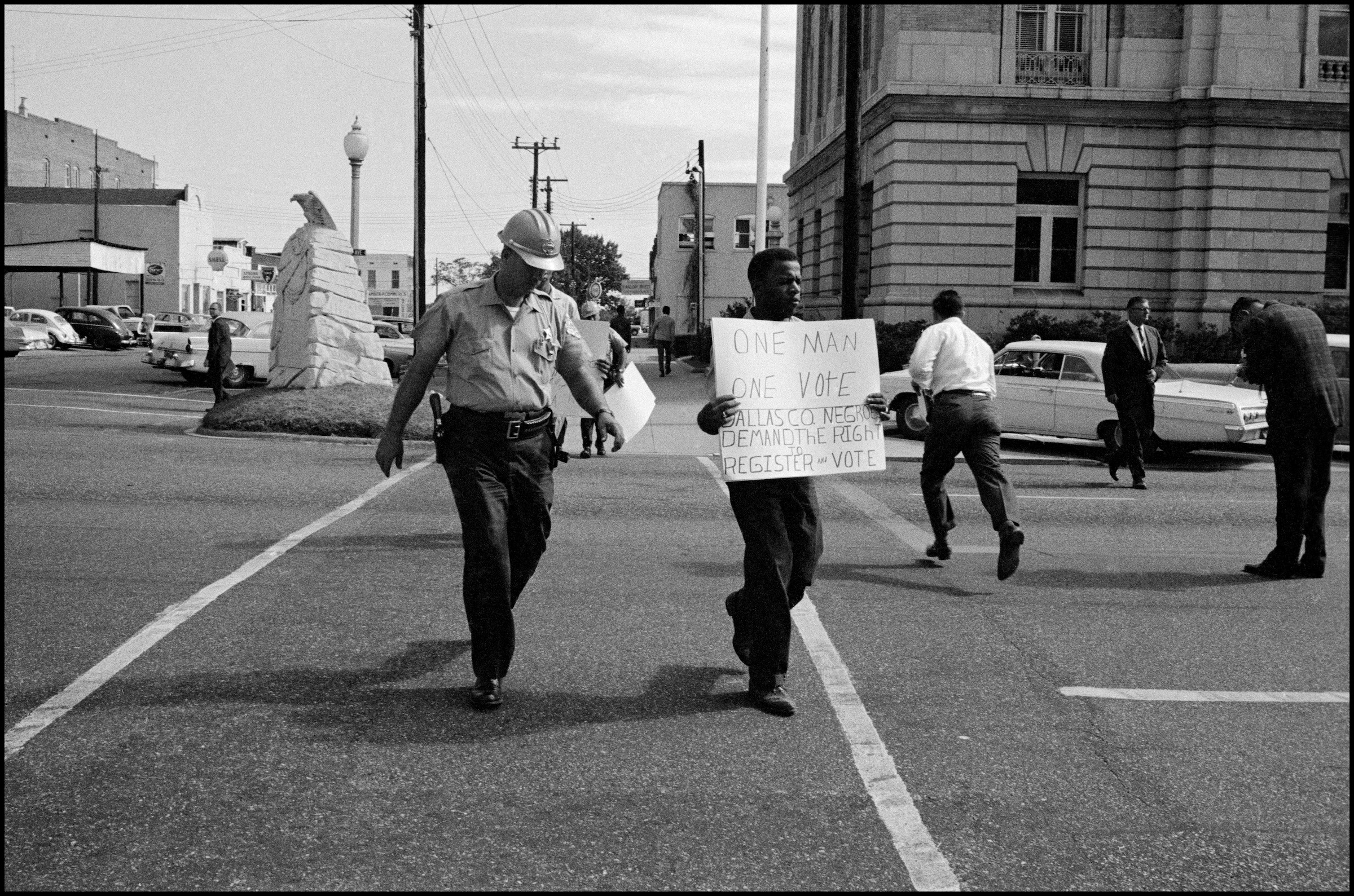 A young activist John Lewis holds a sign that reads: “One Man. One Vote. Demand the Right. Register and Vote.” Danny Lyon/Magnum/Magnolia Pictures.

Resonating in 2020, Lewis eloquently added, “Your vote is precious, almost sacred. It is the most powerful nonviolent tool we have to create a more perfect union.” Meaningful words. Lewis was beaten by a state trooper in Selma, Alabama in 1965 and sustained a fractured skull in the violent assault against civil rights protesters known as ‘Bloody Sunday.’ 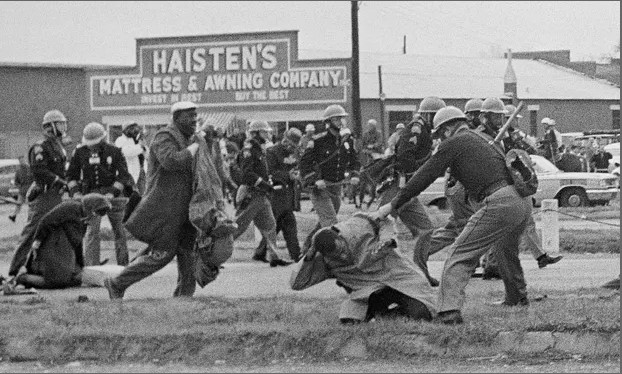 Lewis is shown beaten in photo, above. Taken by unknown Associated Press photographer.

Lewis worked for decades as an activist, was founding member of the Student Nonviolent Coordinating Committee, and organized the 1963 March on Washington with Martin Luther King Jr. before serving as a progressive congressman. “I appeal to all of you to get into this great revolution that is sweeping this nation,” Lewis encouraged voters to get actively involved in furthering social justice and democratic change at the 1963 March on Washington. “Get in and stay in the streets of every city, every village and hamlet of this nation until true freedom comes, until the revolution of 1776 is complete.” Just months before his death in July, Lewis spoke on the Edmund Pettus Bridge in Selma, Alabama in March 2020, telling citizens: “Get in good trouble, necessary trouble, and help redeem the soul of America.”[8] 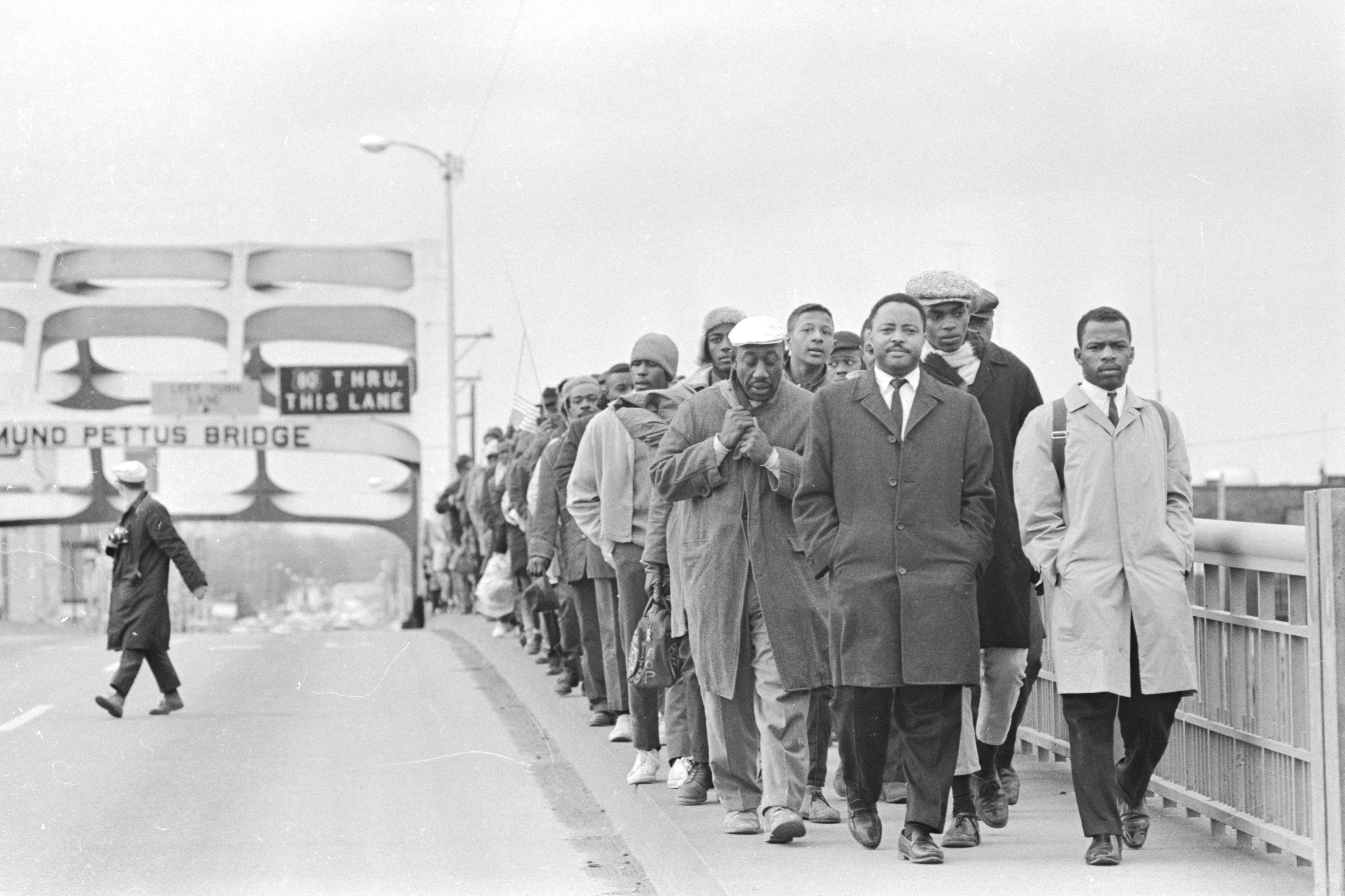 Nominated for Best Picture, Selma was cinematically ‘musicalized’ as John Legend and Common performed their Oscar-winning song “Glory” from the film with civil rights images at the Academy Awards. 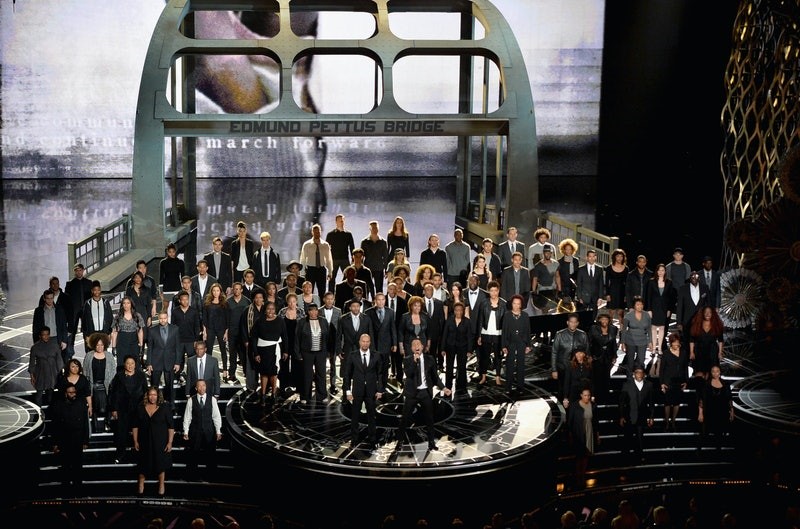 Legend and Common reprised their Oscar performance of “Glory” from the film Selma to honor Lewis at the 2020 Democratic National Convention, streamed on YouTube from the Fox Theater in Atlanta. https://www.youtube.com/watch?v=nPBi88v7adM 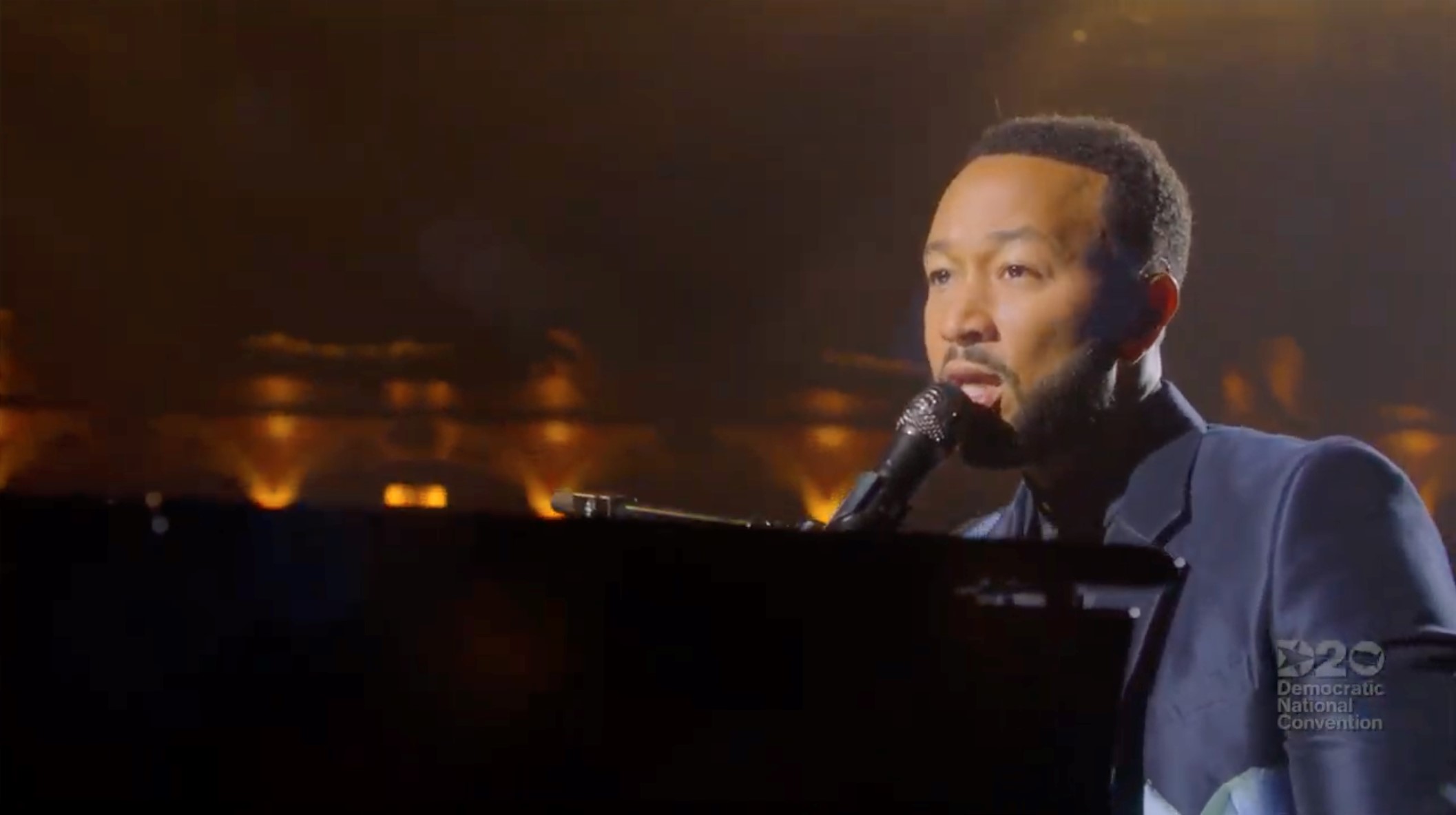 Barack Obama, the first African-American US president, paid homage to civil rights marching with Lewis to commemorate the 50th anniversary of Selma. 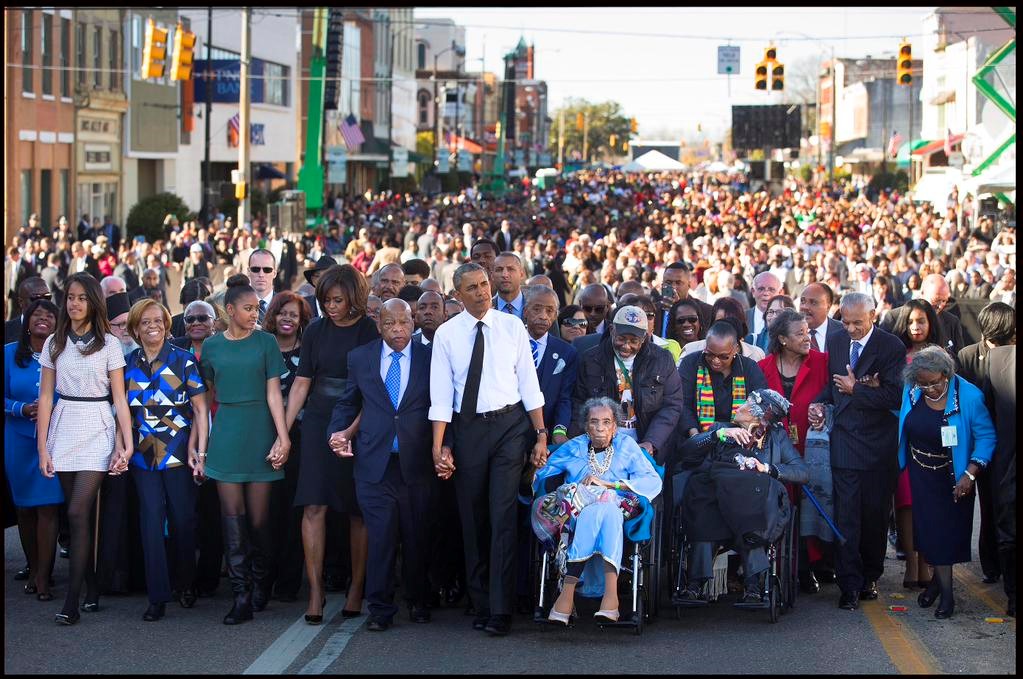 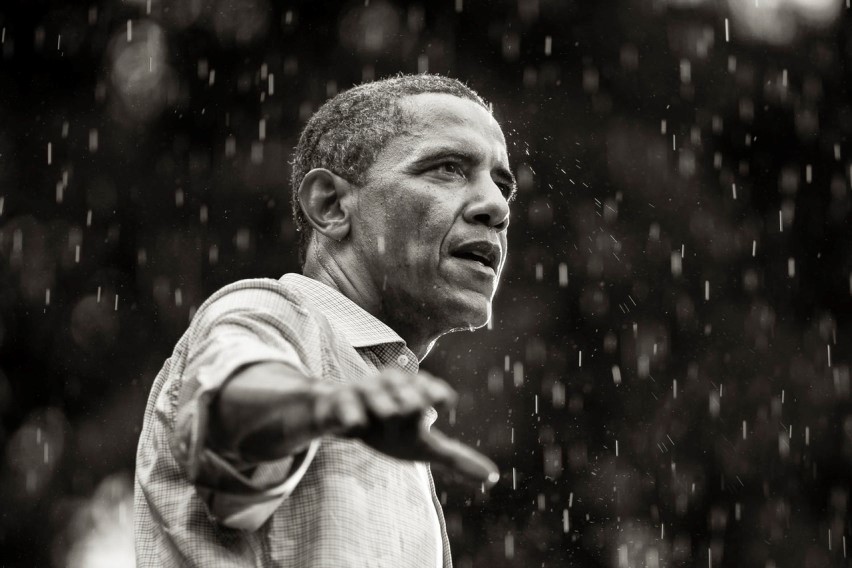 Obama invoked the Civil Rights era and legacy of Dr. King’s ‘Fierce Urgency of Now.’ “Before Memphis and the mountaintop, before the bridge in Selma and the March on Washington, before Birmingham and the beatings, the fire hoses, and the loss of those four little girls, before there was King the icon and his magnificent dream,” people suffered “under the yolk of oppression. And on the eve of the bus boycotts in Montgomery, at a time when many were still doubtful about the possibilities of change...King inspired with words not of anger, but of an urgency, a fierce urgency that still speaks to us today. ‘Unity...is the great need of the hour.’...Unity is how we shall overcome.”[10]

Obama admitted “I talk about hope a lot in my campaign...a hope monger.” Obama’s message of hope was ‘cinematized’ and ‘musicalized’ in viral videos such as: Obama’s ‘Believe’ 2007 ad to strains of Journey’s “Don’t Stop Believing,” Rocky-inspired ‘Baracky – The Movie,’ Obama’s ‘Fired Up’ 2008 homage to Sam & Dave’s “Hold On I’m Comin,” ‘One Voice Can Change A Room’ video ad, and ‘Yes We Can’ music video. The 2020 film John Lewis: Good Trouble includes a viral video of Lewis dancing to “Happy.” Alexandria Ocasio-Cortez, the youngest woman elected to congress, insisted “A Better World Is Possible” in YouTube ads, encouraging feminist empowerment for women of color in a Vogue viral video. Others harkened back to: Simon and Garfunkel’s “America,” Jimi Hendrix, James Baldwin, Bob Dylan, and Saturday Night Fever.

The 2020 Democratic National Convention paid tribute to Lewis in a Dawn Porter film, Obama spoke from Philadelphia, and Kamala Harris honored Lewis, admitting “what happened to George Floyd, Ahmaud Arbery, and Christian Cooper has gone on for generations to Black Americans. Cell phones just made it more visible.” As Obama produces Netflix films (American Factory) which win Oscars, jazz musicians speak out against racism in cinematic musical concert performances urging citizens to vote in November. As Covid-19 spread through the White House Rose Garden, Democratic Senate candidate Jaime Harrison’s 2020 ad used black and white images which slowly bled into full color and invoked the music from Alan Parsons Project’s “Sirius”—made famous in Obama’s 2007 Iowa Jefferson Jackson Speech (and the Chicago Bulls Theme song)—to promote his debate in which he brought his own plexiglass. In the words of Dr. King, “the arc of the moral universe is long, but it bends towards justice.”[11]

John Legend and Common perform “Glory” from Selma at the Oscars: https://www.youtube.com/watch?v=H9MKXR4gLjQ