Melton-Meaux [is] a first-time candidate with strong progressive values that align well with the district, as well as consensus-building skills honed as a professional mediator... Melton-Meaux appears progressive but pragmatic. While Omar wants to lead a movement, Melton-Meaux seeks to serve the Fifth District.[1] 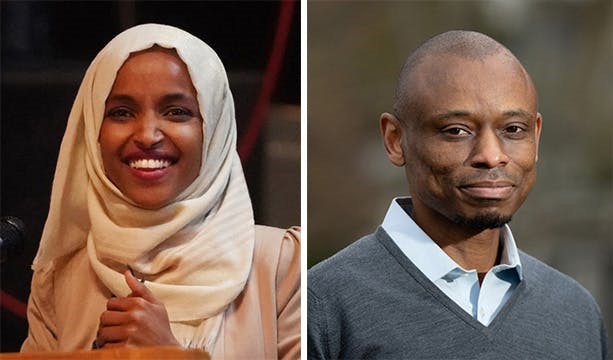 
The Minnesota Fifth Congressional District (henceforth “the Fifth”) is a historically Democratic stronghold (to note, the Minnesota Democratic Party is officially the “Democratic-Farmer-Labor Party” and commonly referred to as “DFL”). The last time a Republican was elected as the Fifth’s representative was 1960; since 2000 the Republican candidate has averaged between 20%-25% of the vote in the general election. The Democratic primary election is essentially the general election, with the winner virtually guaranteed a seat in the House of Representatives.

Since 2018, the Fifth has gained an elevated degree of national notoriety when the district elected Ilhan Omar to the House of Representatives: one of 101 women, the first Somali-American, and one of three Muslims as of the 2020 Primary held on August 11.[2] Rightly or wrongly, Omar became a lightning rod for controversy during her first term over her rhetoric concerning Israel; her marriage to Tim Mynett, a partner in the progressive political consulting firm E Street Group which is employed by “Ilhan for Congress,” and the problematic “optics”; above all, her vocal progressivism which has repeatedly drawn the wrath of Donald Trump, the GOP, and conservative media outlets such as Fox News.

In the 2020 primary, self-defined “practical progressive” Antone Melton-Meaux challenged Ilhan Omar for the Fifth’s DFL nomination. Melton-Meaux’s campaign gained traction due to financial support from numerous conservative PACs and prominent corporate CEOs.[3] My contention is that the local media coverage – including the so-called “liberal” elements – implicitly and not-so implicitly propelled the Melton-Meaux campaign and sought to derail the Omar campaign as much as the influx of outside money. On July 16, WCCO aired what amounted to a 3:34 “Melton-Meaux for Congress” infomercial; while the feel-good tenor of this report was the exception the pattern of the local media coverage playing hardball with Omar and dancing soft-shoe with Melton-Meaux was the rule.

Getting to Know You


With the principal cast in place, the Fifth became yet another national political theater; the latest stage to reenact the on-going internal schism in the Democratic Party: the struggle between democratic socialism (Bernie Sanders, Omar) and neoliberalism (Joe Biden, Melton-Meaux) with the Fifth District Congressional DFL Primary a crucial moment to decide the degree the progressive movement in the Democratic Party would triumph or be vanquished.

In an opening salvo, the conservative PAC Americans for Tomorrow’s Future (ATF) flooded the Fifth with a copious amount of anti-Omar mailers and a virulent attack ad that was in heavy rotation on the local TV stations in the weeks prior to the primary. It was as innuendo-filled assault concentrating on her marriage to Mynett and the economic relationship between the two braced by the disclaimer: “Paid for by Americans for Tomorrow’s Future and not authorized by any candidate or candidate’s committee.” This effectively allowed the ATF ads to go low while Melton-Meaux could go high with his “I approved this ad” TV spots focusing on his general progressive agenda (opposing Trump, supporting police reform, putting a stop to climate change) along with ringing on-camera endorsements from voters in the Fifth.

In response, the Omar campaign issued their own attack ad against Melton-Meaux roundly questioning his progressive credentials by outlining his work for a law film with a long reputation of defending corporations in unfair labor practice and sexual harassments lawsuits with specific reference to Melton-Meaux’s 2018 article for Minnesota Bar & Bench titled “Sexual Harassment Lawsuits: A New Scarlet Letter for Employers?” While not quoted in the ad, Melton-Meaux’s article took the position employers that settle harassment lawsuits can and will “expose their organization to the likelihood that it will be branded by the public as a media as a harasser, a stain that will be hard to remove.”[4]

These two ads were subject to fact checks in the local TV news: the attack ad against Omar in a WCCO “Reality Check” (July 22), the attack ad against Melton-Meaux in a KSTP “Truth Test” (August 3), and a comparative assessment of both ads in a KARE “Verify” (August 10). All three of these fact checks ultimately validate both ads’ accuracy, but there is a key difference as far the two news outlet focused on the respective attack ads directed against Omar and Melton-Meaux: WCCO and KSTP.


WCCO is not only a CBS affiliate but owned by CBS, a network that prides itself on a history of journalism defined by liberals such as Edward R. Murrow, Walter Cronkite, Bill Moyers, Daniel Schorr, and Dan Rather. WCCO has been the most-watched local news in the Minneapolis-St. Paul market for the last decade and similarly perceived as a liberal-leaning news outlet; long-time WCCO anchor Don Shelby was labeled “DFL Don” and in 2012 rumored to be a possible DFL challenger to then-Third District incumbent Republican Erik Paulson.[5] In this context the “Reality Check” made a point of stating that candidates having family members on the payroll was not illegal but also deemed “questionable” while dredging up the sordid “tabloid politics” reports of extra-marital affairs and divorces by Omar and Mynett seemingly sourced from the New York Post.[6] The upshot was the Reality Check by the ostensible bastion of Twin Cities’ “liberal media” not gave credence to but amplified a tawdry conservative PAC attack ad directed at the most progressive member of Minnesota’s Congressional representatives.

KSTP is owned by openly conservative Hubbard Broadcasting; KSTP Radio (1500 AM) was a conservative talk-radio station from the early 1980s to 2010 – the advent of Reaganism to the era of Obamasim – when it rebranded to a sports-talk radio station.[7] It is safe to say that KSTP was not endorsing Omar in the “Truth Test” but, as noted, the Republican Party is largely irrelevant in the Fifth and therefore has no real stake in the district and therefore the DFL primary.[8] The irony was that the “Truth Test” on KSTP (conservative) verified Omar’s ad whereas the “Reality Check” on WCCO (liberal) verified the ATF ad aired on behalf of Melton-Meaux.[9]

On August 4, the Fox affiliate KSMP reported on the campaign, leaving little doubt they were also on the Melton-Meaux train. The next day – and the same day the Minneapolis Star and Tribune endorsed Melton-Meaux “for integrity and progress” – WCCO reported the DFL filed a Federal Elections Commission compliant against Melton-Meaux for a deliberate attempt to conceal the source of his donations through intermediary companies.[10] This report on the lawsuit immediately marginalized if not attempted to negate the complaint by beginning with Melton-Meaux’s strenuous denials and then refocusing on Omar’s ethics (or lack thereof) concerning her campaign. It amounted to a reprise of the “Reality Check” segment validating the Americans for Tomorrow’s Future attack ads cast as a news report on the campaign.


Follow the Money: WCCO report on campaign finance in the Fifth


In effect, by August 11 the local broadcast new narrative depicted Omar as a corrupt politician, an agitator, a national embarrassment, an opportunistic self-promoter, and a myopic member of the “radical Left.” In turn, Melton-Meaux was depicted as the much-needed antidote: an ethical professional, a mediator, a respected member of the community, a candidate committed to the constituents of the Fifth, and a “practical progressive.” Yet the high expectations for the climatic duel promised by the media –and the possibility (read: hope) that Omar would be sent to her political demise in the primary – were anything but met. It was surprising the extent the local liberal media rallied behind Melton-Meaux. Given the narrative produced by the coverage, it was shocking that Omar won in a landslide victory of 57%-39% over Melton-Meaux.


In victory, the media gave Omar obligatory congratulations while reminding the public (yet again) of the same criticisms that have been leveled against Omar since she was elected to Congress. In defeat, the media praised Melton-Meaux for disseminating a message that reached over 60,000 voters and handily besting Omar in the fundraising department.[11] In other words, the final reports informed the Fifth they had a golden opportunity for change and blew it. After winning the primary, Omar proclaimed, “If this election shows us anything, it’s the lengths that those seeking to uphold systems of oppression will go to stop a movement that wants to put power back in the hands of the people.”[12] Writing on August 13, it is one of those rare times the people actually won a battle.

Doyle Greene is an independent scholar who has written several books and articles on film, television, and popular music. His primary area of interest is ideology critique of American popular culture and he currently serves as a co-editor for Film Criticism. He lives in Minneapolis, Minnesota.