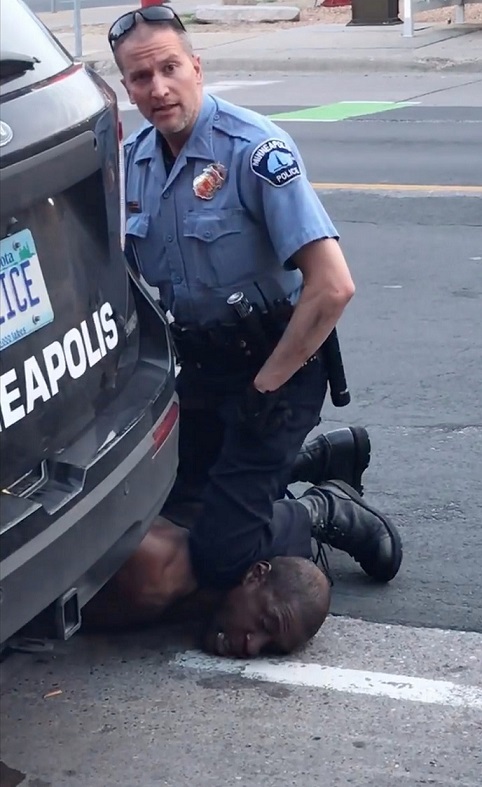 “To Protect with Courage; to Serve with Compassion”: Motto of the Minneapolis Police Department

This essay was motivated by the fact I’ve lived in Minneapolis for much of my adult life. The last fifteen years I’ve lived in a building three miles from the site where George Floyd was murdered by Minneapolis police officer Derek Chauvin on May 25. My focus in this essay will be two-fold: (1) assessing how the local media discourses during the ensuing days of Floyd’s death – specifically from May 28-30 – constructed a narrative of events that engaged audiences in a process of “discipline and education”; (2) how that concentrated effort to discipline and educate the citizens of Minneapolis revealed the extent to which State control is predicated on its ability to adjudicate the life and death of the body-politic.

In the final hours of May 28, ongoing demonstrations sparked by Floyd’s murder escalated when the Minneapolis Police Department’s Third Precinct building was gutted in an act of arson. This event effectively represented the moment when law-and-order ended and anarchy began. The corresponding local media coverage quickly shifted from outrage over the active violence inflicted on Floyd and the surrounding community by the police to the reactive violence caused by the protestors. At 1:30 am May 29 Minneapolis mayor Jacob Frey held an impromptu press conference to defend his decision to evacuate the Third Precinct by stating “brick and mortar is not as important as life.”[1] Frey’s fundamental political “error” was stressing the importance of human life over a police station: a signifier of State power. What ultimately matters here is the State’s ability to arbitrate life and death as it sees fit.

The Minnesota National Guard was subsequently mobilized, and on the morning of May July 29, a press conference was held during which Major General Jon Jensen blamed the level of disorder on the lack of decisive orders by state and city officials. Governor Tim Walz blamed Frey for abandoning the Third Precinct to the protestors. Frey was conspicuous in his absence at this press conference.

An 8 pm-6 am curfew was then issued for the evenings of May 29-30. After the May 29 curfew was roundly ignored, another morning press conference on May 30 ultimately drew the thin blue line in the sand. Walz, Frey, and Jensen were joined by St. Paul mayor Melvin Carter III and other Minneapolis government officials to present a unified front. Governor Walz unequivocally stated the unrest over Floyd’s murder was an effort “to break the back of civil society.” Walz ordered the full mobilization of the Minnesota National Guard with a minimum of 2,000 soldiers set to occupy the Twin Cities Metro area – by the end of May 30, the number of Guardsmen had risen to over 5,000 –and Walz announced if necessary the Pentagon mobilized US Army military police as reinforcements. As Major General Jensen repeatedly stated, “We’re all in.” To put it another way, “Minneapolis, you’re all in for a serious time-out.”

This was followed by an early afternoon press conference of with Walz and several community activists across ethnic, gender, racial, and religious lines. The message was similar yet different. Peaceful demonstrations during the day were strongly encouraged along with emphatic pleas to end the protests by 8pm and return home in time for the curfew. This was followed by a third press conference held by Minneapolis Chief of Police Medaria Arradondo restating the point that the protestors had the right to peaceably assemble before 8 pm would be respected but after 8 pm all bets were off. During the Iraqi War, the proverbial out was “I’m against the war but I support the troops.” As the May 30 curfew loomed, the comparable compromise was “You can oppose police brutality, but you will support the cops.” Eldridge Cleaver, the Minister of Information for the Black Panther Party, famously stated “You’re either part of the solution or you’re part of the problem.” On May 25 it was glaringly apparent that the problem was law enforcement and the solution was protest. By May 30 the situation was categorically reversed: protest was the problem and law enforcement was the solution.

Michael Hardt observed that “Foucault made clear that civil society is a society founded on discipline and that the education it offers is a diffuse network of normalization.”[2] In this context, the trifecta of press conferences attempted to discipline and educate the citizenry of Minneapolis in two ways. First, by explicitly outlining the “dos and don’ts” of civil disobedience, making clear what would be tolerated and what would not. Second, the press conferences hammered home the consequences that would befall the protestors once the “dos” veered into the “dont’s”: citations, arrests, jail time, and even the worse if the issue was pressed. In short, the local TV stations were partner to an all-day civics lesson undergirded with a dose of abject terror.

Giorgio Agamben has suggested, “The great metaphor of the Leviathan, whose body is formed out of the bodies of individuals...The absolute capacity of the body to be killed forms the new political body of the West.”[3] Brian Massumi has further argued, “The dead have always played an active role in American politics. In the 1980s, they became one of the most powerful political constituencies in the country.”[4] In 2020, this constituency was the 100,000-plus Americans who had died in the COVID-19 pandemic. After George Floyd’s death, a constituency was, again, manifest as the steadily increasing number of people who had fatal encounters with the police.

Teaching You the Fear

On the evening of May 30, a video was posted on Twitter by Tanya Kerssen was quickly picked-up by the local news. This video was taken within the first hour of curfew and the Minneapolis Police Department was not wasting time enforcing it. It depicts the MPD marching aggressively down a street. As they all stop and turn to Kerssen and friends recording the police on their porch, the police issued cursory orders to go back in before suddenly peppering them with paint projectiles. Kerssen’s cellphone camera provides a point-of-view shot of people being fired at by the Minneapolis police as they’re being fired at and fleeing into the house in terror.

The actualization of death by the State is disturbingly evidenced every time we re-watch Floyd being killed by Chauvin. The harrowing aspect of the Kerssen video, however, is the way it provides an exhibition of the State’s ability shoot but not kill; it essentially functions as a dress rehearsal of potential death courtesy of the MPD.[5] To be sure, on the surface it becomes yet another documented example of excessive use of force by the police. Underneath, it carries a more ominous subtext. The people on the porch would have joined the constituency of those killed by the police except for the fact that “non-lethal” ammunition was used. By placing us as viewers in the same position, for a brief moment, it allows us the dubious honor of what it means to be part of the political constituency of the dead.

As I write this in the late evening hours of May 30. WCCO anchor Frank Vascellaro mused, “I’m learning a lot as a citizen.” So am I. 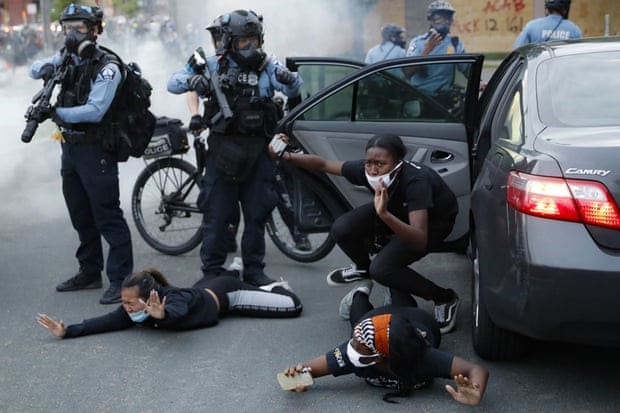 Minneapolis: Love It or Leave It

Doyle Greene is an independent scholar who has written several books and articles on film, television, and popular music. His primary area of interest is ideology critique of American popular culture. He currently serves as a co-editor of Film Criticism.

My considerable thanks go to Joe Tompkins for his comments and suggestions on this essay.

5. Here I am reminded of a scene in Pasolini’s Salò ,or the 120 Days of Sodom (1975). One of the torturers places an unloaded pistol into temple of one of the tortures, pulls the trigger, and then gloats, “We can kill you one thousand times!”