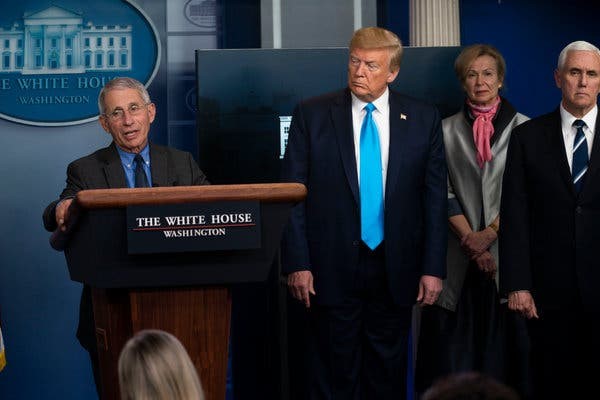 For many (though of course not all) Americans, lockdown culture has re-cemented and re-made our relationship with television. The last month has re-acquainted us with some of its traditional functions, revitalized its communicative capacities, and reinforced our awareness of its prodigious output in the era of “peak TV”.

Television has emerged during the Covid-19 crisis as a medium of solace and as a new kind of timekeeper, introducing forms of temporal regularity that had fallen out of favor or didn’t previously exist. Nightly news broadcasts on legacy channels have regained their luster while in New York, mid-day news conferences by Governor Andrew Cuomo draw considerable audiences. 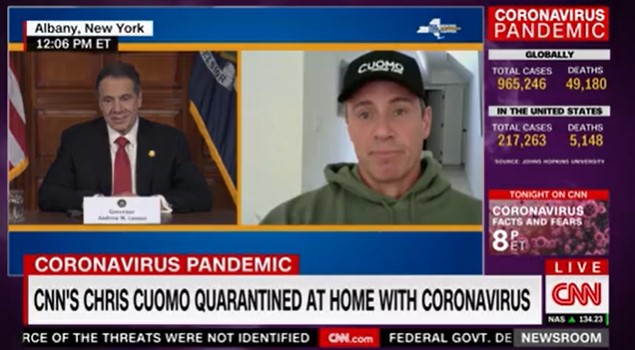 Figure 2: CNN's Chris Cuomo (broadcasting from his basement while suffering from coronavirus) appears alongside his brother Governor Andrew Cuomo.

From early in the crisis, Cuomo has been celebrated as an alter ego to Donald Trump, with some writing bemusedly of their attraction to his embodiment of paternalism, authoritarianism and compassion, as well as his rhetorical coherence. Indeed, American television in the pandemic is marked by a cacophony of charismatic male authorities, including Cuomo, his younger brother CNN broadcaster Chris Cuomo, CNN’s medical commentator Sanjay Gupta, and White House infectious diseases expert Anthony Fauci. All have been positioned by the outlets on which they appear as figures in whom the public may safely repose its trust. In contrast, Deborah Birx, the Trump Administration’s Coronavirus Response Coordinator, registers faintly as a pallid figure. When her name is Googled, top searches for her after her name alone are “Deborah Birx Husband” and “Deborah Birx Scarves.”

With social distancing protocols and the absence of normal physical interaction, we watch television differently, cringing at crowd scenes and the casual closeness of people to one another in media produced before the pandemic. There are new, perverse pleasures to be had in watching news anchors, meteorologists, and talk show hosts broadcasting from their domestic spaces as we evaluate their home design choices and scrutinize the extent to which the absence of professional hair and makeup services alters their on-camera appearances.

Meanwhile Netflix, HBO and Showtime supply ample opportunities for the ambivalent (re)consumption of fictional public health crises (Outbreak [1995], Contagion [2011]), zombie apocalypse scenarios (The Walking Dead [2010 to now], and virus/zombie hybrids (28 Days Later [2002]). With a new focus on crisis reporting, other quotidian functions of television have receded in the last month. Weather, entertainment journalism, and even financial news at a time of great economic peril: all find their importance dwarved by other exigencies. The enormous number of sport-related channels devote themselves to historical matches, games, and tournaments.

New elements of the television landscape include public service announcements about social distancing and handwashing. Hospital chains tout their brand and celebrate their heroic teams of workers. And one of the most striking new arrivals into the television ecosystem is the corporate decontamination ad that engages in pandemic virtue-signalling even as it lays down a marker for a future time in which corporate brands will be refurbished and the services with which they are associated again widely used. An exemplar is Uber’s coy “Thank You for Not Riding With Uber” campaign, which offers a montage of scenes of lockdown togetherness. The campaign seeks to mobilize public sentiment, implicitly promising that the euphemistically-named ride-sharing service will have a major role to play when normal freedom of movement is restored. Emphasizing race, gender, and age diversity, the campaign tries to reinforce the idea that Uber is for everyone and that even though it can’t bring people together in this crisis moment, it will soon do so again.

In exhorting us to stay home, the ads work to curry favor by seeming to advocate against Uber’s own profit interests. They also work to displace news coverage of the pandemic’s consequences for precaritized labor, specifically the decimated finances of many Uber drivers and the roadblocks that exist in their qualification for unemployment compensation. 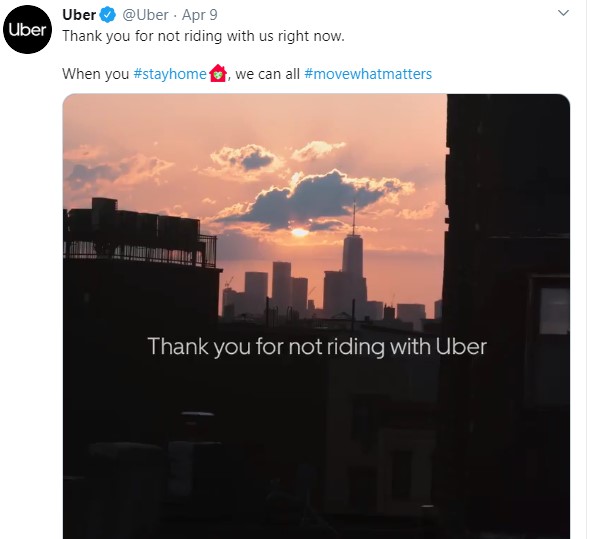 Offering only a partial inventory I hope these reflections are of use in beginning to map the changed television landscape of Spring, 2020. More than this, I hope they gesture toward understanding what our public culture consists of at a calamitous time when we do not meet in public and cannot yet know how the covid-19 crisis will change us.

This piece was reprinted by Film Criticism with permission from the University College Dublin Clinton Institute for American Studies America Unfiltered blog.

Diane Negra is Professor of Film Studies and Screen Culture at University College Dublin where she is affiliated with the Clinton Institute for American Studies. A member of the Royal Irish Academy, she is the author, editor or co-editor of ten books. She serves as Co-Editor in Chief of Television and New Media and is Chair of the Irish Fulbright Commission. Her current projects include a monograph on Shadow of a Doubt and two edited collections: Imagining "We" in the Age of "I:" Romance and Social Bonding in Contemporary Culture and Anti-Feminisms in Media Culture.