The opening of 28 Days Later (Danny Boyle, 2002) remains one of the most memorable moments in contemporary horror cinema: London emptied of people, cars, and most prominently, noise [Fig. 1]. In 2002, these images felt unsettling because they sharply contrasted with the hustle and bustle of urban city life. However, in spring 2020, when cities across the world are under lockdown, this silent, empty city has become recognizable under quarantine, shelter-in-place, and stay at home ordinances. In many ways, it feels as though we are living in a horror film, constantly vulnerable to an invisible threat. 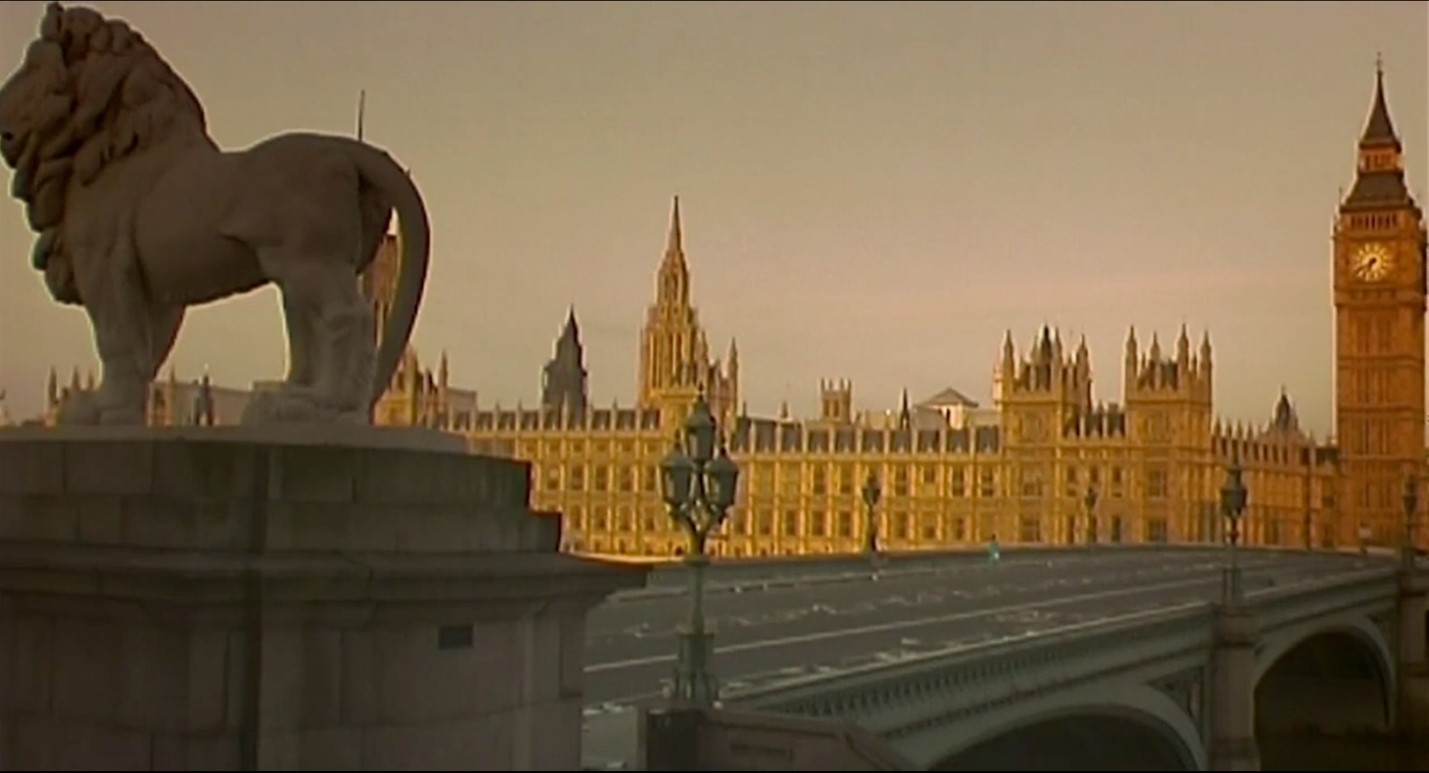 The sonic experience of COVID-19 has been reported across the world. From Italians taking to their balconies in song, to the cacophony of sirens that echo across New York City’s deserted streets, sound has become a critical way to understand the impact of the virus on daily life. I return to this sequence from 28 Days Later to show how soundscapes shape our perception of space and safety during outbreaks. I place these sonic epistemologies—or “acoustemologies”—in dialogue with accounts of sound in COVID-19 to question how our experience of urban life under quarantine may reimagine sound in cinema. I ask: What do silence and sound signify in this time of crisis? What kinds of sound and sonic environments signify safety, danger, or containment?

28 Days Later’s empty London is partly signified by the relationship between diegetic sound effects and the still environment. As the man makes his way through the city, posed against iconic landmarks, the only indications of life we can see or hear come from the rustle of his plastic bag or the sound of his footsteps. As the man wanders through the city, he arrives at Piccadilly Circus and makes his way to an abandoned car. Reaching out, he grabs the handle and alarm suddenly sounds, causing him (and us) to leap back in surprise.

The quiet is emphasized by a distinct lack of ambient sound: no electrical hum, no chirping of birds, or sound of wind; the sounds of modern, urban life. These opening moments foreground the epistemological function of sound: The way sonic cues like ambient sound, echo and volume help us sense a space on screen. Steven Feld proposes the term, “acoustemology” to describe the potential “for acoustic knowing...of sonic presence and awareness as potent shaping forces in how people make sense of experiences.”[1] Sound helps us understand our surrounding environment: to gauge distances, proximities, and to locate entities. This is tied to sound’s ability to signify presence of material objects and surrounding spaces. Disrupting these phenomenological and epistemological codes in the context of horror creates the feeling of vulnerability, susceptible to the intrusion of noise. Boyle’s use of silence produces the necessary context for the aural jump scare, where the blasting car alarm cause us to leap from our seats.

However, this horror extends beyond these tropes to the film’s larger narrative project. Spatialized disease management, in the form of quarantine or hospitalization, has sonic effects; 28 Days Later references the visual, sonic, and social implications of these management strategies by phenomenologically situating the viewer in the midst of an urban quarantine. As the opening unfolds, sound reveals a city devoid of life; with every unanswered cry and seemingly infinite echo, the city seems to expand and empty out. This is partly indebted to an association between sound and the presence of life that conjures reference to the hushed quarantine zones during the plague. In his account of the early modern London soundscape, Eric Wilson describes the unsettling silence of the quarantine zone, broken by the cries of the infected. These intermittent sounds reaffirmed the presence of the living, in spite of the deadening silence that cloaked the cordoned urban spaces.[2] Likewise, the silence of 28 Days Later emphasizes how sound calls upon the epistemologies of audible perception to produce an experience of the structures of disease management.

Sound in 28 Days Later creates the immediate experience of an outbreak: How it feels to be vulnerable to the spread of deadly virus. However, under COVID-19, cities are still teeming with life, saturated in ambient sound. In other words, we might say the urban city scape has been reduced to ambient sounds: the occasional car driving by, the sounds of birds, or neighbor’s muffled TV’s and music. Cities are still full of sonic life, but it remains locked inside, and when sound cuts through, it takes on new significance. In Madrid and New York, coordinated efforts on social media resulted in a collective applause for health care workers that rang out through the quiet city.[3] “Sound flash mobs” across Italy have filled cities with music created by voices and ad-hoc instruments.[4] In these cases, breaking through the background noise is means to signify life and solidarity: a reminder of the collective efforts to preserve life in the midst of a public health crisis.[5]

By contrast, at my home in Los Angeles, the quiet has come to signify safety. Unlike 28 Days Later’s opening, seeing my empty street and hearing the distinct lack of noise doesn’t create a sense of dread, but comfort. It suggests that Angelenos are staying home for the well-being of others. But at the same time, the hushed city streets still carry the looming threat of the disease. For while they demonstrate the public’s effort to contain the virus, they simultaneously express the persistent threat that necessitates our silence. Breaking through that ambient sound can thus also express danger: a cough, the chatter of a crowd, or in the case of New York City, a symphony of sirens. In the wake of COVID-19, emergency calls have risen by more than 40%,[6] creating an urban soundscape where sirens continually cut through background noise, reminding residents of the danger that lurks outside.

The threat signified by silence is also partly, an instrument of social control.[7] The looming threat of infection has historically been used to increase the power of the state and nation. Both Pricilla Wald and George Rosen have described how “epidemics dramatize the need for regulation,” a responsibility most often assumed by local and state governments.[8] Indeed, Michel Foucualt’s Discipline and Punish, begins with an account of quarantine as a mechanism of institutional control: “Plague is met by order;...[quarantine] lays down for each individual his place...by means of an omnipresent and omniscient power.”[9] Drawing upon this work, Tom Rice’s study of hospital soundscapes shows how the oppressive silence of the recovery wings, the crackle of the hospital intercom, and the echoing steps of doctors and nurses, all impact the individual’s perception of space, authority, and sense of patienthood.[10]

We might ask how the experience of sound in COVID-19 shapes our perception of the self and our relationship to the structures of disease spread and prevention: Whether the relationship between silence and noise is an instrument of social control, a site for solidarity, or a signifier of safety. In his account of space and social distancing, Kyle Stevens asks whether the meaning of proximity in cinema will be reimagined in the wake of this pandemic.[11] A similar question could be asked of sound: Will noise and silence take on new meaning in a post-COVID-19 world? I cannot help but imagine life “28 months later,” where urban life remains slightly hushed to reinforce a sense of care and safety after an outbreak.

Mikki Kressbach is an Assistant Professor of Film, Television and Media Studies at Loyola Marymount University. She completed her dissertation, “Perfect Contagion Machine: Digital Media, Scientific Evidence, and Emergent Outbreaks” at the University of Chicago in 2018. Her current research explores the impact of popular digital health technologies on health and embodiment.