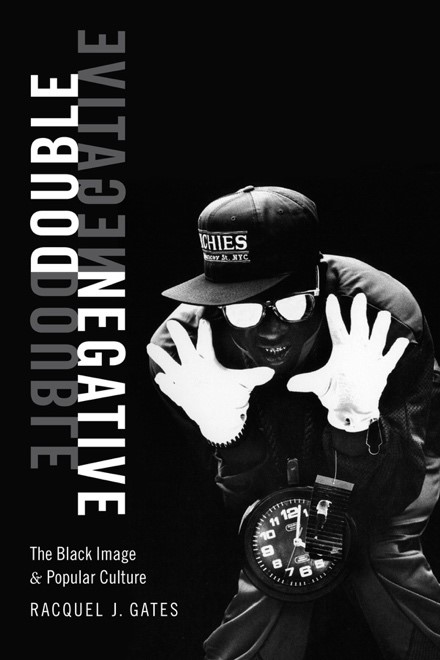 What is productive about examining so-called “negative” images of blackness within media culture? Racquel Gates’ incisive, well-researched and easy-to-read book Double Negative: The Black Image and Popular Culture deftly answers this question. Building on media studies, cultural studies, genre studies, media industry studies, reception studies, film and television formalism, critical race theory, gender theory and queer theory, Gates masterfully shifts the conversation about black image production from one mired in a reductive positive/negative binary to one that demonstrates how “disreputable” images are productive as a conduit to nuanced discussions about black images. While conversations around “useful” black images often engage “usual suspects” like The Cosby Show and Black Panther to explore questions of mediated black upward mobility, black love, assimilation and the politics of respectability, Gates assembles a list of “negative” texts that are as pedagogically rich and useful as their “respectable” counterparts in revealing the innerworkings of black life through media.

In Chapter 1, Gates focuses on Coming to America. By sifting through film reviews, interviews with director John Landis and Eddie Murphy, and engaging celebrity/star studies and authorship studies, Gates argues that Coming to America functioned as two films – a Hollywood romantic comedy for white viewers and reviewers and a sketch comedy film, drawing on Murphy’s stand-up comedy roots for black viewers. Thus, Gates argues that the film is formally negative because it “reverses the standard formula for conventional romantic comedies by emphasizing its comedic B-plots rather than its main romantic story lines.”[1] Importantly, in this chapter Gates centers the media industries’ stance that big budget black-cast films cannot only appeal to black viewers but must also appeal to mainstream (read: white) viewers.

Chapter 2 focuses on a corpus of films that Gates argues create a countercanon to the New Black Cinema fare that scholars and popular critics herald as emblematic of 1990s cinematic blackness. Gates argues that Strictly Business, Livin’ Large, True Identity and The Associate, which she calls “sellout films,” are only “negative” in comparison to the “great” films that hew more closely to the social realism of New Black Cinema. Gates incisively argues that “while the hood films tackle the very literal life-and-death decisions that young black men face, the sellout films address the emotional, social, and psychological nuances of ‘succeeding’ in a white world.”[2] This chapter is particularly noteworthy for Gates’ attention to the Whoopi Goldberg vehicle, The Associate which she posits engaged with an intersectionality that white critics could not comprehend. As a case study, Gates uses The Associate to demonstrate how the sellout films are often misunderstood because of not only the complexity of the arguments each film engages, but because they are told through comedic modes versus dramatic ones.

In order to demonstrate her theorization of circumstantial negativity, Gates engages a celebrity study of Halle Berry. Using paratexts – both interviews in which Berry participates and media that discursively circulates about her – Gates argues that in a period of roughly 10 years, Berry’s star text shifts from the (black) girl next door to the “white man’s whore” despite Berry’s centering her racial identity as a black women (versus a mixed race woman). Berry, according to Gates, is circumstantially negative because of “the issues and debates surrounding [her star text] rather than a direct relation to [a] positive counterpart.”[3] Gates points to Berry’s role as the axial character in the television adaptation of Alex Haley’s Queen as the turning point, suggesting that her mixed race heritage was important for industrial reasons. While Berry was an “it girl” at the time, and is the child of an African American father and a Caucasian mother, she does not look like a mixed race woman. Gates lays out a convincing case that paratexts around Queen began highlighting Berry’s heritage and as such, her overall star text shifted resulting in more opportunities for Berry in primarily white-cast films (ultimately winning an Oscar for Monster’s Ball in which, according to several black critics, she portrayed “the white man’s whore”).

Chapter 4 focuses on reality television and strategic negativity. Gates suggests that black-cast unscripted series like Love & Hip Hop and Basketball Wives embrace their negativity within a “trashy” genre in order to “explore topics that their positive counterparts do not address.”[4] Gates lays out a dazzling chapter that explores black women’s labor, the ways these black women can eschew wifedom (a particularly fantastic section lays out a rejected proposal from Love & Hip Hop’s fourth season), and the series’ engagement with queerness.

The book’s conclusion engages with Empire as a false negative – a show that borrows heavily from disregarded series like Love & Hip Hop but does so within the markers of “quality TV” – A-list casting and acclaimed writers and producers. And those markers of “quality,” Gates argues, help to insulate the series from claims of being a “negative” representation.

I wish Gates made her methods clearer in the introduction (if not in each of the chapters). Additionally, because the analysis is so good, I wish Gates’ had (re)centered her theorizations about types of negativity within each chapter. The analysis certainly holds, but had she done so, it would have made this already quotable book even more forceful and compelling.

One of the most important things about Gates’ book is that it demonstrates how and why the assumption that those working in black media studies are knowledgeable about only the “margins” is patently false. With Double Negative, Gates establishes not only her knowledge of black film and television studies, but film and television history writ large. She discusses Sirk’s Imitation of Life, Dynasty and The New Normal as easily as she engages with black-cast media. Double Negative is such an exciting book because of its interdisciplinarity coupled with the ways Gates, as a writer, researcher and scholar, seems unafraid to get into the messiness that is media and cultural studies to sort it all out for the reader. Her razor-sharp analysis keeps the genre, race, representation, industrial and reception plates spinning – which is no minor feat with all the evidence Gates synthesizes.

Alfred L. Martin, Jr., is an Assistant Professor of Media Studies in the Departments of Communication Studies and African American Studies at University of Iowa. Martin is author of the forthcoming monograph, The Generic Closet: Black Gayness and the Black-Cast Sitcom (Indiana University Press).