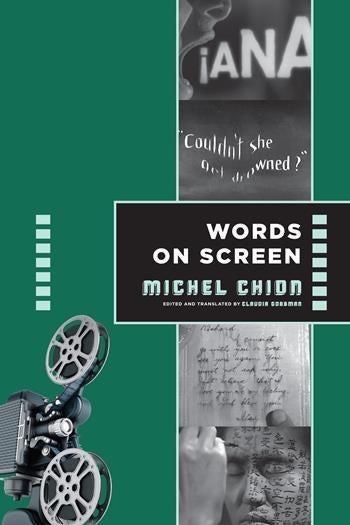 Writing is a feature in films that is often overlooked when considering the totality of what films have to offer. Michel Chion aims to change that in Words on Screen, a text that seeks to not only recover writing from the fringes of filmic thought, but to also theorize the different ways writing appears in film. Not relegated to examples of deliberate writing like a letter written to a loved one, Chion’s book looks at all types of writing, from opening credits to signs, and even to subtitles. Early on, Chion declares, “This book...deals with everything written and printed in films.”[1] Chion’s list is intended to be as exhaustive as possible on the topic, and he approaches the subject in the form of an inventory, utilizing more than a hundred films from numerous countries. Not limiting himself to solely Hollywood or European films nor to talkies, Chion discusses words as they appear in films from the earliest of silent to 21st century examples. His work “is a poetic sketch of a vast topic about which you could imagine a much more significant book made up of a vast fresco of five or six thousand frame images.”[2] It takes on an inventory approach to the subject of words in cinema in order to understand the convergence of words and film in a myriad of styles; this is done to better understand how words and cinema interact with one another, their conflicts, and potential futures for words in cinema. His approach allows for the reader to better grasp the material and to understand how film has evolved to include text in all forms.

The book is divided into three sections (An Infinite Inventory; Writing, Reading; Writing in Film Space) in order to tackle the various types of writing, and how this has been displayed in films over time. As Chion’s work is profuse and covers a great depth and breadth of the subject of words in film, each chapter summary will cover a sampling of his concepts. Chapter one explores names of places and people in films, masterfully covering names or places real and imagined, including how often place names are neutralized to create an everytown that erases the real. Chion discusses how a street sign served as inspiration for a character in one of Bruno Dumont’s films: “A real street sign gave him the idea to invent a character in L’humanité, a policeman who is [a local painter’s] descendant and bears the same name.”[3] Names interpolate characters; writing saves lives in Schindler’s List, while tombstones signify a life lost. Chapter two delves into nondiegetic writing: title cards, studio logos, screen credits, and other forms of writing that serve to inform the audience whilst being independent of the diegetic reality of the film in which the text appears. Appropriately enough, Chion ends the chapter by discussing ways in which The End appears in films. Chapter three discusses diegetic writing as athorybos, a term Chion uses for “any object or movement in the image that could – either in reality or in the imagination – produce sound but which is not accompanied by any sound.”[4] It is a term that is introduced here to explain words that exist within the film’s reality but are not uttered or otherwise brought to life on screen.

Chapter four grapples with physical writing as presented on screen. This includes the writing of the hand of God in The Ten Commandments, but also other examples like typewriters (and their accompanying sounds) in films like Welles’ The Trial. All throughout the text, Chion discusses the myriad ways in which writing appears in films; he locates these writings in diegetic reality, filmic reality, or as nondiegetic to emphasize the concept that writing-is-everywhere in films. Chion discusses how films undo books in chapter five. In this chapter, Chion makes a compelling argument about how Robert Bresson, in particular, transitioned from working with well-known writers on his early films to effectively replacing the author with his own hand in the film Diary of a Country Priest. It is this film that features diary entries that modify the text of the original book and seem to be written by Bresson himself.[5] Chapter six ventures into a historical mode when discussing half-reading – the concept that before the days of VCRs, writing that would appear briefly on screen was not read but read-in-passing or half read – and how filmmakers post 1985 create their word appearances with the mindset that films will be later consumed in ways in which the viewer will be able to pause the film to read the words as presented. Chapter seven grapples with films in translation, such as when one reads in one language, but hears in another. It takes on the ideas of subtitling films as well as what happens when a film is dubbed, but the street signs and other identifiers in the film itself are in the film’s language of origin. Chion makes mention of how the silent reading of moments in films are disrupted when words intended to be silently read are spoken aloud into the translated language instead. Between that and the current inability to translate verbal chiaroscuro into subtitling, Chion suggests that it may be time to come up with new visual codes to represent the audibly obscure into something similarly written.

Chapter eight discusses writing – a two-dimensional act – within a three-dimensional landscape. By discussing Avatar, Chion points to how the film’s 3D presentation always succeeds in presenting words as 2D, even with the irony of having to subtitle the Na’vi language – a language that diegetically does not have a written component. Chapter nine looks at anagrams and the way words have often been in play in films, including the opening credits of Barbarella that have the letters of an actor’s name swirling around Jane Fonda’s body. Chapter ten examines the concept of excription: the erasure of words in film. Love letters torn and scattered are a singular example of the multitudinous ways in which words leave no trace on screen but, ultimately, leave a trace on the viewer.

While the text is brief and well organized, the breadth of materials covered sometimes renders the text mildly confusing; if one cannot remember the meaning of all of Chion’s terminology, one will spend a considerable amount of time reviewing the terms to make sure that the meaning is clear. The glossary is helpful, but frequently referring to it may slow down the pace of reading the text for the uninitiated.

For anyone who is really interested in understanding how words function in films, or would like to read Chion’s work as a follow-up to his previous writings like Audio-vision, this is a worthwhile text to read. It is accessible for graduate school-level readers and may be intelligible to upper-level undergraduates if they read the glossary before beginning the text. Chion’s work opens a world of opportunities when it comes to understanding words in film.

Kay K. Clopton is the Mary P. Key Resident of Cultural Diversity Inquiry at the Ohio State University. She completed her doctorate in Comparative Studies in 2018, and she currently works for the Billy Ireland Cartoon Library and Museum as part of her residency program.