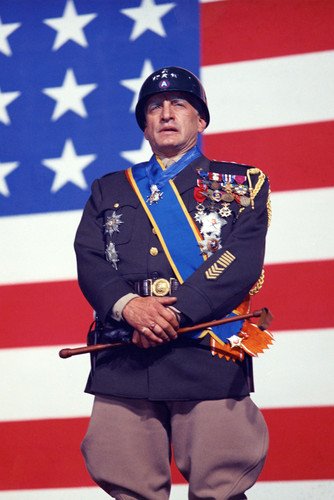 Patton (Franklin J. Schaffner, 1970) famously opens with General George S. Patton (George C. Scott) dressed in full military regalia on a stage in front of a gigantic American flag. Here the exaggerated theatricality of the opening sequence can be discussed using the question of “historical accuracy.” In order to do so – via some Althusserian short-hand – I will analyze footage of the “real-Patton” from his “Homecoming Speech” in Los Angeles (June 9, 1945) juxtaposed against “imaginary-Patton” from the opening speech. 1945 juxtaposed against “imaginary-Patton” from the opening speech.[1] If Patton provides an overdetermined representation of the famous general, it is only because the source material was more overdetermined in the first place.

Imaginary-Patton: George C. Scott in the title role of Patton (1970).

Real-Patton is oddly the kinder, gentler representation compared to the presentation offered by Patton. The uniform is largely identical but real-Patton’s performance is homey, measured, mordant, and even subdued. There are glimpses into Patton’s brutal philosophy that if “War is Hell” it is because total war necessitates total “Hell on Earth” strategies and tactics. In contrast, imaginary-Patton is acutely essayed before he even speaks by the lingering close-ups and cuts between the stiff salute; the riding crop, the myriad medals, the jutted jaw, the pearl-handled revolver, and the four stars and Third Army insignia on his helmet. A bugle bleats “To the Colors” on the soundtrack. The figure of imaginary-Patton is both fetishized and satirized. In terms of delivering the speech as a performance, imaginary-Patton is belligerent, boorish, grandiose, and vindictive. One might say he is one goosestep away from Mussolini on the balcony. Imaginary-Patton does not so much compare to real-Patton but references and self-references another cartoonish symbol of American militarism played by George C. Scott, Gen. Buck Turgidson in Dr. Strangelove (Stanley Kubrick, 1964).

The sardonic toughening of real-Patton to imaginary-Patton is dialectically countered by a deliberate softening of real-Patton to imaginary-Patton. The monologue that constitutes the Patton speech is largely taken verbatim from speeches Patton gave to the Third Army in the weeks prior to the D-Day Allied Invasion of France, with Patton theorizing on what might be called his brand of “American exceptionalism” – his endorsements of unfettered manhood, unwavering patriotism, and unflinching victory –are best expressed in the opening axiom: “No dumb bastard ever won a war dying for his country: he won it by making some other dumb bastard die for his country.” The speech which begins Patton speech consciously dilutes the copious profanity, the incidenary rhetoric, and even unrestrained sadism that peppered real-Patton’s original speeches: “We’re not just going to shoot the bastards; we’re going to rip out their living goddamn guts and use them to grease the treads of our tanks. We’re going to murder those lousy Hun cocksuckers by the bushel-fucking-basket.”[2] The original text of the speeches “as is” would have been too over-the-top for Patton’s ideological juggling act. They are more grotesquely self-parodic than any ironic or parodic representation American militarism that could possibly be offered in Patton. Nathan Rabin argued that Twentieth Century Fox, the film studio that released Patton, faced a formidable challenge given its release at the height of the Vietnam War: “How do you sell the Love Generation on an epic biopic of a man who embodied hardline militarism?...[Fox] ultimately succeeded in simultaneously selling Patton to hawks as a square pro-war move and to doves as a brash anti-war movie...Patton should have fallen apart under the weight of its own contradictions. Instead, like its subject, [Patton is] enriched and emboldened by them.”[3]As far as the question of cinema and contradiction, Jean-Luc Comolli and Jean Narboni contend:

[There are] films which at first sight seem to belong firmly within the ideology and to be completely under its sway, but which turn out to be only in an ambiguous manner. For though they start from a non-progressive standpoint, ranging from the frankly reactionary through the conciliatory to the mildly critical, they have been worked upon, and work in such a real way that there is a noticeable gap, a dislocation...The films were are talking about throw up obstacles in the way of ideology, causing it to swerve and get off course....One can see two moments in it: one holding it back within certain limits, one transgressing them. An internal criticism is taking place which cracks the film apart at the seams. If one reads the film obliquely, looking for symptoms; if one looks beyond the apparent formal coherence, one can see that it is riddled with cracks: it is splitting under an internal tension which is simply not there in an ideologically innocuous film...This is the case in many Hollywood films...which while being completely integrated in the system and the ideology end up partially dismantling the system from within.[4]

As Comolli and Narboni formulate it, Hollywood films that offer a radical critique are those that cannot contain their ideological contradictions when they undergo a symptomatic reading. The best-known example is an analysis of Young Mr. Lincoln (1939, John Ford) credited to the editors of Cahiers du Cinéma: “In Ford’s fiction, all the idealized representations of the Law, and its effects produced by the bourgeoisie, far from havening been erased by Ford...[is] a strange balancing act the filmmaker has insisted on performing.”[5] 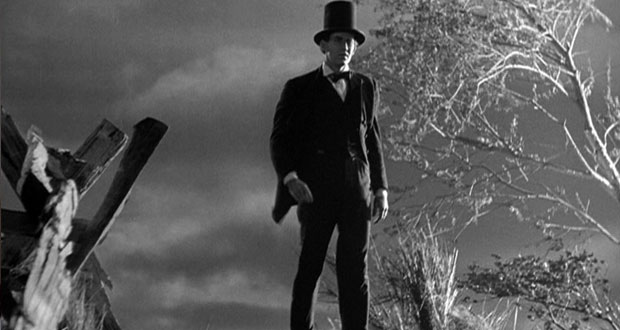 As Rabin argues, Patton does not collapse under its ideological contradictions; instead, the film is “enriched and emboldened” by them, effectively doing damage control on the textual problematics. The “strange balancing act” of Patton is largely negotiating the tightrope of satire. Ultimately, Patton says less about war than it does about the advantages of political satire in the marketplace of mass culture.

The War at Home: All in the Family

What Patton was to Vietnam, the landmark CBS sitcom All in the Family was to American domestic politics. All in the Family was a ratings juggernaut, number one in the Nielson rankings for five seasons (1971-1976). The “dirty secret” of All in the Family was despite the intended liberal satire of blue-collar conservatism, the phenomenal success owed to the fact that conservatives took the satire literally and found an unintended spokesperson in the “tell it like it is” Archie Bunker. Meanwhile, liberals found their spokesperson in Bunker’s son-in-law, hippie graduate student Mike Stivic. As Peter N. Carroll argued:

All in the Family apparently offered something for everyone. Archie’s appeal to middle-aged workers, however, illuminated basic strains within American society...[It] demonstrated television’s ability to absorb and deflect working-class frustrations...Viewer’s inadvertently accentuated their passive relationship to the larger society. Endorsing Archie’s harangues might release tension, focus anger, week after week create an illusion of power...The television fantasy of discontent became an electronic substitute for real life.[6]

Likewise, Patton “apparently offered something for everyone as well.” The difference was All in the Family offered a binary of “two sides to each story” – one liberal and one conservative – whereas Patton’s representation of the title character was more a case of “one side fits all.” Patton transformed the general into an imaginary-Patton: a cultural and political icon that could be revered by the Right as an uncompromising American warrior and appreciated with an ironic nod and a wink by the Left as a comical American travesty. Meanwhile “dumb bastards” would continue to kill and be killed for their countries.