It seems simple: a piece of red, white and blue cloth with stars and stripes, hanging from a pole, blowing in the wind. The American flag is a symbol of heroism, patriotism, and somber remembrance for the fallen. The banner honors military service to a nation, while also representing the spectacle and pageantry of war. Yet the cinematic incarnation of this emblem is capable of suggesting more nuanced and complex connotations. We may not typically associate the American flag with the gritty zeitgeist of film noir, yet such films use it to produce a social critique of corrupt institutions in post-war America.

In the aftermath of the Second World War, talented European émigré filmmaker Fred Zinnemann cinematically reframed the American flag to reconsider what it means to be patriotic. Using social realism and the style of film noir, Act of Violence (produced in 1948, released in 1949) and From Here To Eternity (1953) critique the simplistic and reductive penchant for Americans to wave the flag, foolishly believing that it will make the world whole again.

Zinnemann, whose own family perished in the Holocaust, was acclaimed by the United Nations for his semi-documentary styled social realist film, The Search (1948), shot on location overseas. An American GI, Ralph Stevenson (Montgomery Clift) helps displaced refugees reunite in a devastated postwar Europe.

In Zinnemann’s next film, the underrated Act of Violence, the American flag is presented in stark contrast to the disturbing noir opening of the film. Maimed World War II veteran, Joe Parkson (Robert Ryan) pursues vengeance against his former commander and war buddy, Frank Enley (Van Heflin), a celebrated war hero. However, Frank’s troubling past reveals that he is actually a traitor who betrayed his men while they were in a prisoner of war camp. He made a deal with the Nazis which led to the soldiers’ brutal massacre. In the film’s opening, Zinnemann uses chiaroscuro lighting to establish an unsettling mood against the silhouette of a nocturnal New York City skyline.

A disturbing use of sound accompanies the obsessed veteran Joe dragging himself across the street. Bronislav Kaper’s riveting, atonal minor-key music score, conducted by a young Andre Previn, creates tension and blares an auditory warning. Zinnemann then builds suspense in outdoor daylight, as the noir setting immediately shifts from the urban terrain to the bright quiet (fictitious) town of Santa Lisa, California. There, the American flag billows in the wind as World War II veterans march in a Memorial Day parade. Joe again tries to cross the street, while the war-hero Frank smiles with his wife and baby in the sunshine. Frank receives an award from the community, allegorically wrapping himself in the flag. 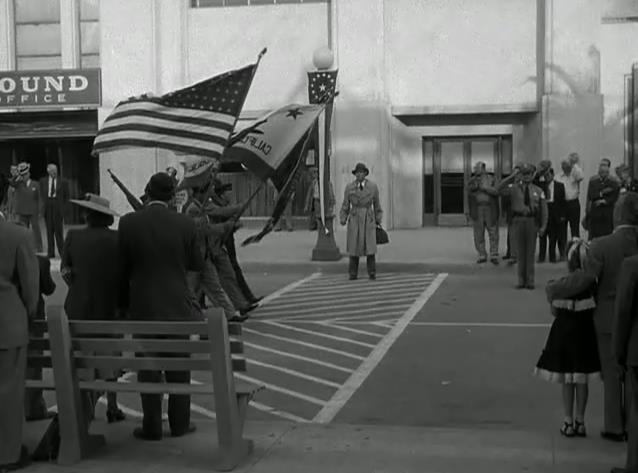 The soundtrack even includes diegetic audio commentary from the radio announcer covering the Memorial Day parade remarking on the bright sunshine and the American flag flying as citizens honor the solemn memory of those fallen in battle. Meanwhile, Joe is dressed in a trenchcoat and fedora, appearing menacing, a presumed antagonist so very different from the veterans in military formation marching with the flag. The patriotic ceremony literally prevents Joe from crossing the street. However, the irony is that—although out of uniform—he is actually another veteran with whom we should be concerned, a victim of Nazi atrocities abetted by the town’s war hero.

Originally entitled The Traitor, Act of Violence was Zinnemann’s last picture for MGM. The film noir entry reconsiders the meaning of the flag, questioning superficial assumptions regarding patriotism, heroism, and wrapping in the flag. The post-war social problem film was released just as ‘Cold War’ tensions escalated with the Red Scare, HUAC hearings, McCarthyism, and the Hollywood blacklist.

In Act of Violence, Frank hides the disturbing betrayal of his men to the Nazi enemy. Joe is Frank’s best friend, a disabled victim who barely survived the violence. He is not merely a menacing antagonist. We witness the transformation and ultimate redemption of both characters as Frank sacrifices his own life to save Joe from assassination by a hit man.

Joe, the apparent villain, was in fact a victim of atrocities committed in wartime, enabled by the cowardice of Frank’s betrayal. In fact, Frank is so ashamed that when Joe tries to kill him, Frank refuses to call the police. He insists to his wife, “You don’t know what made him the way he is. I do.” His apparent heroism is based on a lie. The American flag becomes a structuring absence throughout the remainder of the film.

Just a few years later, Zinnemann’s From Here To Eternity, set in 1941 in the months before the Pearl Harbor attack drawing the United States into World War II, was shot on location in Hawaii. Yet, significantly, despite the fact that the film takes place on a U.S. military base in the Pacific, the American flag does not appear throughout most of the film.

The flag is conspicuously absent until the very end of the movie, when it appears in the office of the military brass reprimanding a corrupt officer for abusing his men. Only at the film’s ending does the banner serve as a powerful, rugged symbol of resilience and perseverance. The Stars and Stripes defiantly blows, tattered in the wind as the men shoot down one of the enemy planes. The image of the flag conjures the familiar photograph of the raising of the flag at Iwo Jima. The flag flies amid scenes recreating the battle which are juxtaposed with actual documentary footage of the real-life attack.

Zinnemann strategically employs the American flag in From Here To Eternity to counter the film’s otherwise critical portrayal of corrupt institutions. The film uses the flag judiciously, presenting it when a top general dispenses military justice, an example of the vague ‘compensating moral values’ demanded by Production Code censors.

Amid a growing Cold War, in a December 1953 letter, Zinnemann expressed anxiety over the film’s European and international release, and was concerned about its overseas reception, writing:

The anti-American feeling is very strong and very widespread and it seems quite clear that the Communists are prepared to exploit any item they can get hold of in order to increase hostility to America... In this situation, with world shaking decisions in the making, it would seem to me a frightful blunder to release From Here to Eternity in any country—whether Europe or Asia—which has a large body of opposition to the United States....I was so concerned about all this that...the idea of [adding] a foreword [to the film’s opening] which would state, without apologizing, that our film deals with pre-war America...is urgently necessary.

However, Columbia studio chief Harry Cohn responded that he was not aware of efforts by foreign countries opposed to the United States to use American motion pictures as propaganda, insisting: “You doubtless know that in the foreign countries where ‘Eternity’ has opened, the business has been very big.”[1] (The film does not include a foreword.) Thus, in the end, the flag’s powerful cinematic incarnation prevailed to amplify, complicate and transcend social critique. Zinnemann’s From Here To Eternity would go on to win several Academy Awards, including the Best Picture Oscar of 1953 and Best Director for Zinnemann. The legacy of papering over complexity in the interest of dangerous, simplistic flag-waving continues to this day. However, critical artists like Fred Zinnemann have bequeathed to us echoes of a more compelling way of presenting the history of the United States.