On a lonely, empty highway, a silver Harley Davidson chopper sparkles and glistens in the sunlight, freshly polished and ready to ride. The camera racks focus and begins to slowly pan over the chopper so that we may examine all of its details in extreme close-up. Appealing to one’s kinesthetic and haptic sensibilities, we see the chopper’s front wheel and headlight are so polished that they work as individual mirrors reflecting the surrounding vast open space. As the camera continues to pan across the chopper, the viewer is struck by the appearance of a highly recognizable image that has been spray painted onto the chopper’s teardrop gas tank: the American flag.

The camera continues to pan over the chopper to reveal two more American flags that ‘belong’ to the owner, Wyatt (who prefers the moniker, Captain America). The first is a painted image that covers the surface of his motorcycle helmet, the other is embroidered and sewn onto the back of his leather jacket. 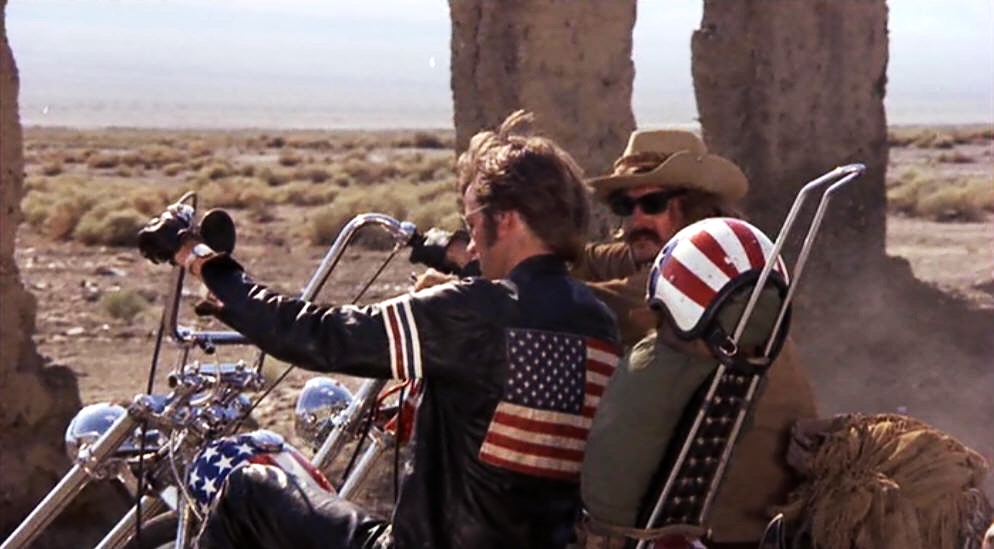 The scene is part of the opening montage from Dennis Hopper’s revolutionary film, Easy Rider (1969) which is celebrating its fiftieth anniversary in 2019. Hopper’s film is fondly remembered as the first of the New Hollywood movement and has commonly been interpreted by academic film scholars as a genre film, specifically a hybrid neo-Western.

The prism of Art History can provide new insights into the function of the American flag as an image in Easy Rider beyond what has already been revealed via film genre analysis. This essay compares Hopper’s use of flag in the film to his personal interest in the Pop Art movement. In doing so, this interpretation provides an intermedial pathway to interpret how Hopper’s interest in the fine arts speaks to his legacy in Hollywood cinema. As Susan Sontag noted in On Photography, “No one expects photographers to get help from painting.”[1] But in Hopper's case, he did. 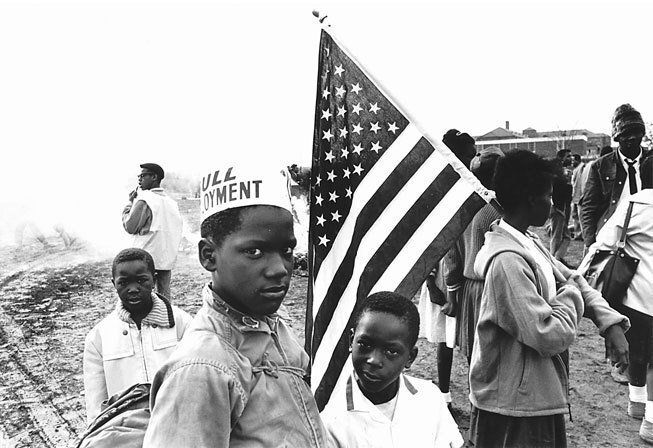 Hopper was not only an actor and director, but also a practicing visual artist. He worked in a wide range of disciplines, among them: photography, abstract painting, sculpture, and assemblage. He was an obsessive art collector; he owned works by Andy Warhol, Roy Lichtenstein, Ed Ruscha, Julian Schnabel, Keith Haring, and Jean-Michel Basquiat.

In edited collections of Hopper’s photographic works published by The Hopper Art Trust (such as Out of the Sixties and Dennis Hopper: Photographs, 1961-1967), Hopper’s photographs document the presence of the American flag in the midst of radical socio-political and economic change, as seen in Selma, Alabama (Full Employment) (1965). Hopper’s interest in photography also collided with the development of the American Pop Art movement. Hopper was a regular at FERUS Gallery (the first to hold a solo show of Warhol’s work) and Hopper filled his home in Los Angeles with Pop Art works such as Warhol’s Soup Can (1962) which he purchased for $75.

Before analyzing Hopper’s use of the American Flag in Easy Rider as an artistic tool of expression, it is important to note the contextual backdrop of how the American Flag was used in art history directly preceding the release of Hopper’s film. In post-war American photography, the American flag was used by visual artists in a manner that reflected the characteristics of documentary journalism (particularly by hybrid visual artist/filmmakers Gordon Parks and in Larry Clark’s Tulsa series).

In Gordon Parks’ American Gothic, Washington, D.C. (1942), Parks’ portrait of government cleaning woman Ella Watson exposed issues of racism and poverty in the lead up to the Civil Rights movement, reinterpreting and remixing the idea about how the fundamental truths of American identity can be interpreted as inextricably tied to unity and discrimination.

A decade later, Robert Frank’s documentary photographic series published as The Americans captured how the flag appeared in relation to themes concerning American icons, romance with materialism and consumerism, and the American condition itself.[2] In The Americans, Frank used the flag as a filter through which America is perceived; it is the way Americas see themselves, through the mythology of the American Dream. Frank wanted to capture the reality “within and behind the flag, within and behind America’s public face” [3]

In Frank’s photographs, Fourth of July – Jay, New York (1954), we can see the beginnings of the ideas and depictions of the American Flag that appeared another decade later in Easy Rider. Fourth of July was taken on Independence Day; Frank choose to document how “America celebrat[ed] itself” along with “the dream of a new way, a new and better life” that broke away from European hypocrisy, class divisions and tyranny.[4]

The American flag Frank chose to photograph in Fourth of July is torn, mended and ignored by the human subjects within the frame; the realty of the flag is that it is faded cloth with patchwork that questions “America’s shiny chrome dream.” [5] But as W.T. Lhamon Jr., notes, when revisiting The Americans there is one pressing question: Are there stories in these photographs, and what are their conditions?[6]

As a series, The Americans was not designed to display narrative, but to offer stills in random order. This is where Easy Rider becomes revolutionary, for Hopper translated both the image and the iconographic meaning of the American flag and inserted it into a linear cinematic narrative. Therefore, the use and the meaning of the flag in Easy Rider has a beginning, middle and end. However, whether or not the flag evolves along with the characters, Billy and Wyatt, is entirely debatable. 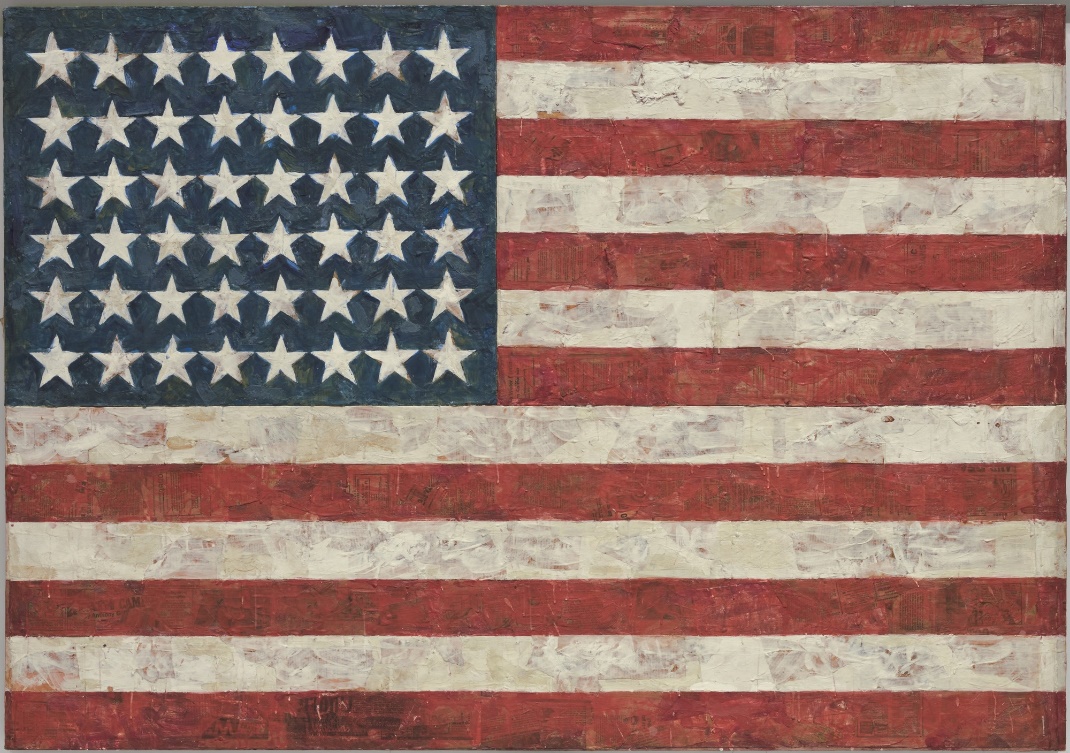 Within Pop Art, the American flag became a “quintessential symbol of America’s national identity” (therefore depictions of the flag that reduce its sacredness motivate strong critical responses).[7] Jasper Johns became the most renowned artist within the Pop movement for interpreting the flag as an image, especially for his work, Flag (1954-55). In 1962, Hopper met Johns on a brief trip to New York. The two became friends and Hopper documented Johns through candid photographic portraits such as Jasper Johns (1964) and Irving Blum and Jasper Johns (1964).

According to Johns, the greatest benefit of painting the American flag is that it is not an original image.[8] Therefore, the significance of Johns’ Flag painting lies in the “meaning contained in its construction.”[9] Johns used a bedsheet as opposed to canvas and dipped bits of newspaper into coloured encaustic (a solid made from beeswax) and applied layers of paper to the surface to re-create the flag design.[10] Johns’ specific use of materials created a process of looking whereby it is the viewer who is being examined (as opposed to the painting).[11] 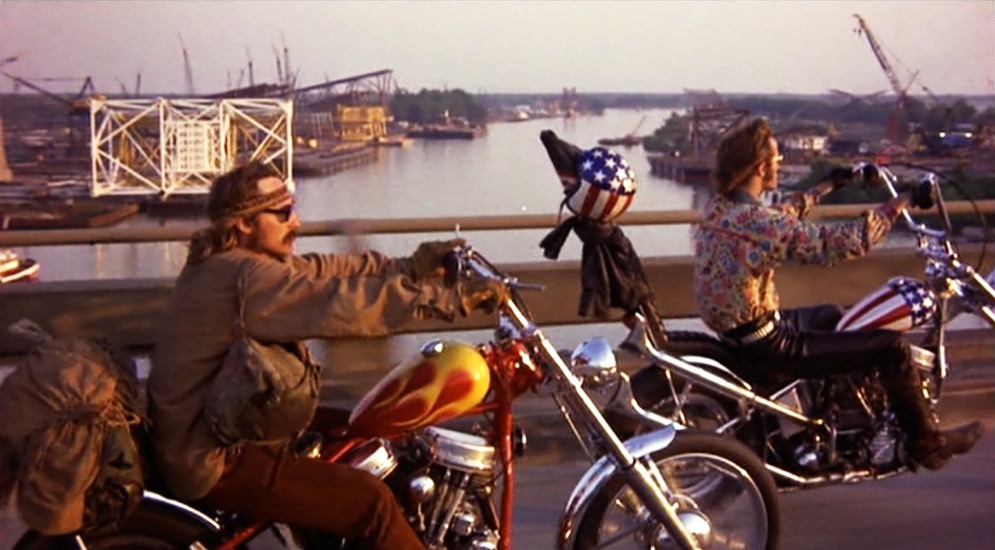 In The American Dreamer (1971), Hopper provides a clue as to how Johns’ Flag image aligns with Easy Rider. Hopper argues that at the end of Easy Rider, there is no difference between Wyatt and Billy and the two men in the truck who kill them. The duality of the flag image when attached to the character of Captain America is that the presence of the flag fools both the viewer and the character himself. Captain America can be interpreted as a hero because he is attached to the image of patriotism and nationhood, yet his involvement in the drug trade results in the deaths of citizens across America. The film allows Captain America to blindly follow the outlaw American tradition without being morally questioned.

The final shot of Easy Rider reminds us of the consequences of the character’s decision: with the low crackle of an orange fire burning through the spray-painted flag image on the gas tank, it is the outlaw lifestyle that prevents Captain America from experiencing true freedom. The flags in Easy Rider allude to a cycle of death within outlaw cinema culture; Captain America is doomed because he chooses to continue society’s violent tradition of the outlaw.

Hopper’s decision to include the flag as a character in Easy Rider contributed to the shift in artistic depictions of the flag in the late 1960s. Colliding with various art movements like Conceptualism and Post-Modernism, artists took the opportunity to reinterpret the American flag, aided by the cheap availability of mass-produced imagery and the topicality of remixing culture. According to the artist Rashid Johnson, a crucial turn in 20th century art refocused attention on the physical act of art making rather than the end product exclusively (beginning with David Hammons’ America The Beautiful in 1968). Johnson stated:

“Post-Pollock, the body becomes a tool. Pollock’s body essentially functions as a brush. You have the psychological drama of the body as well as the tension of interacting with material—it becomes the instrument for how that material is distributed, but also how the ideas around that material are distributed. The body is kind of forced into whatever position it needs to be in to allow that representation to become accessible” [12] 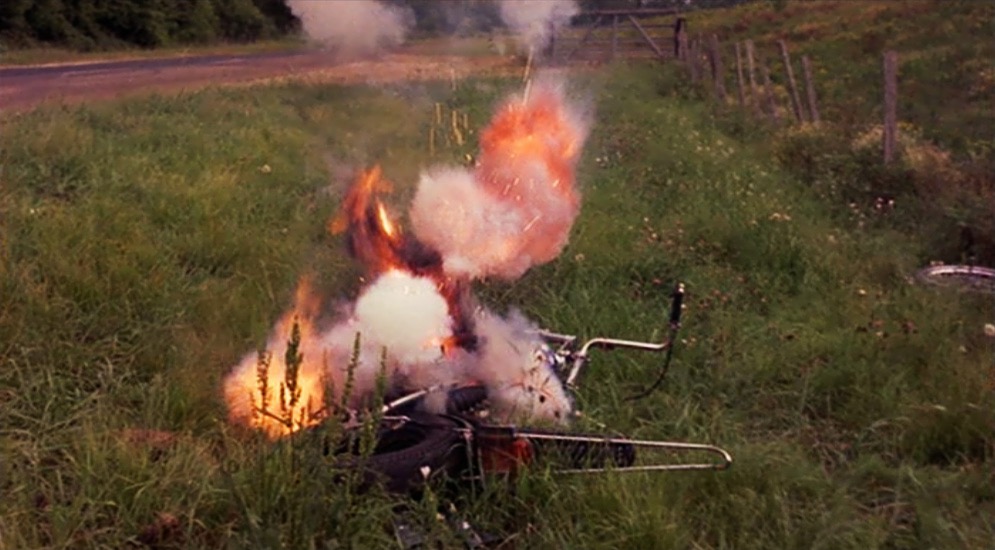 Johnson’s idea that contemporary paintings became more aware of the presence of the body is of particular interest to Easy Rider, mainly because the flag is literally sewn into and worn as costume by Captain America. Therefore, in Easy Rider the flag becomes an element and an iconic image that moves and interacts with the human body. Additionally, because Captain America rides his motorcycle while wearing his flags throughout the entire film, Hopper’s use of the American flags diverts from other representations of flags in American art history because they are constantly in motion; they are not fixed onto a gallery wall.

In Deanna Templeton’s 2015 photo 'zine, They Should Never Touch the Ground, Templeton photographs the many ways in which Americans choose to wear the Stars and Stripes brandished across t-shirts, bandanas, bikinis, and platform heels, often in a misguided display of patriotism.[13] The series highlighted the juxtaposition of the flag as a cherished symbol and as something that is trivialised and debased by those attempting to honour it.[14] Without crediting Easy Rider directly, Templeton’s work invites us to continue to thinking about how Easy Rider’s use of the flag as clothing and costume relates to an evolving interest in the wearable nature of the flag.

Upon its initial release in 1969, Easy Rider was Hopper’s warning to the youths of America to not blindly follow the path of violence in the post-Vietnam era. Today and on its anniversary fifty years later, the flags in Easy Rider still perpetuate the same message. As an image, the flag can retain some of its essential qualities but can be reworked and remixed by an artist. To continue outlaw culture is to not end misery but intensify it.

Joanna Elena Batsakis is a Ph.D. candidate and tutor at Monash University, writing her thesis on her favorite artist, Dennis Hopper. Joanna has published about Hopper, Julian Schnabel, Sofia Coppola, Robert Mitchum, Marc Maron, Jack Kerouac, and Scarlett Johansson in journals including Screening the Past, Celebrity Studies, Senses of Cinema, and Refractory.